AAC Halcyon and 556 – New Products From An Industry Leader 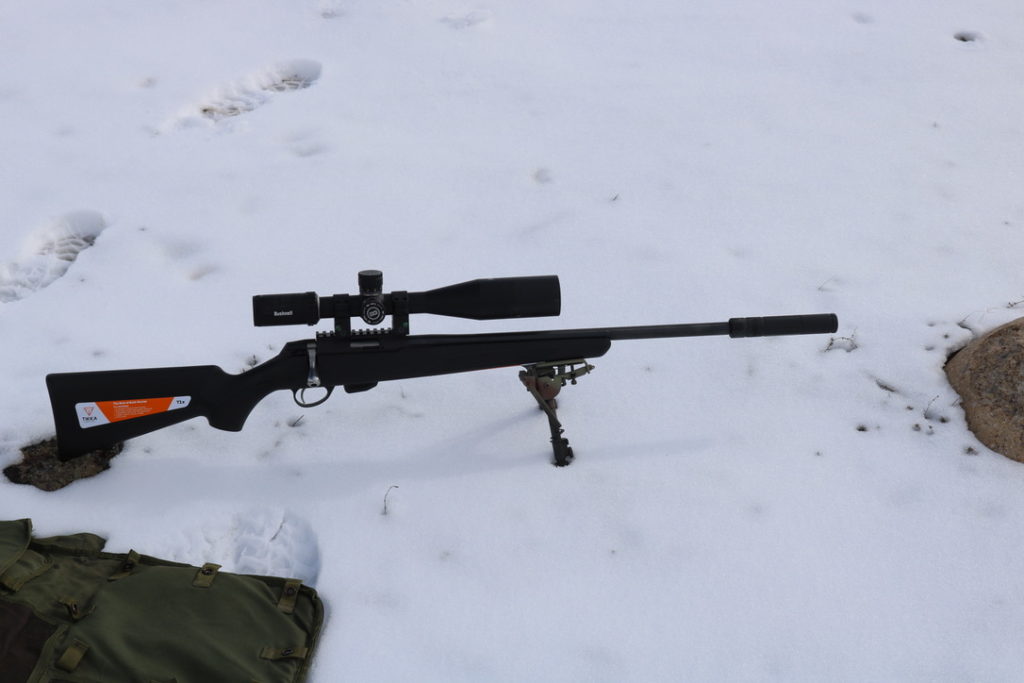 AAC is one of the big boys in suppressors, an original in the new school wave of can dynasties. We owe AAC a great debt, if for no other reason than leading the charge in making suppressors cool. At a time when “silencers” were mostly the playthings of nerds and collectors, AAC brought attitude. From the skulls in the logo to the idea you should not only use your can, but use the hell out of it, they were a breath of fresh air. Two and a half decades in, they still feel young at heart. So it is with great pleasure this week I get to write about new options. 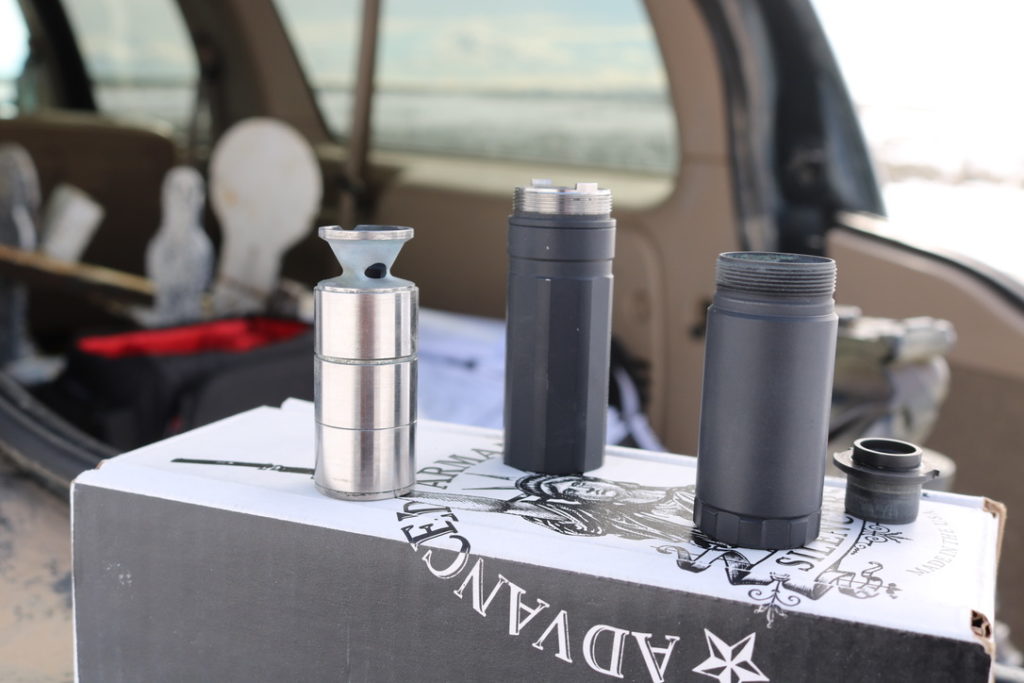 Can with Ti baffle stack.

First up is the Halcyon, a powerhouse of a rimfire suppressor. AAC has long led in the rimfire market, with options like the Element 2. But plenty of other companies have been nipping at their heels as of late. Rimfire seems to be the hottest thing going in cans, and the competition is getting fierce. Which is awesome for us consumers. So AAC went back to the drawing board for a new contender. The solution, the Halcyon-designed to do everything rimfire, and do it better than anyone. 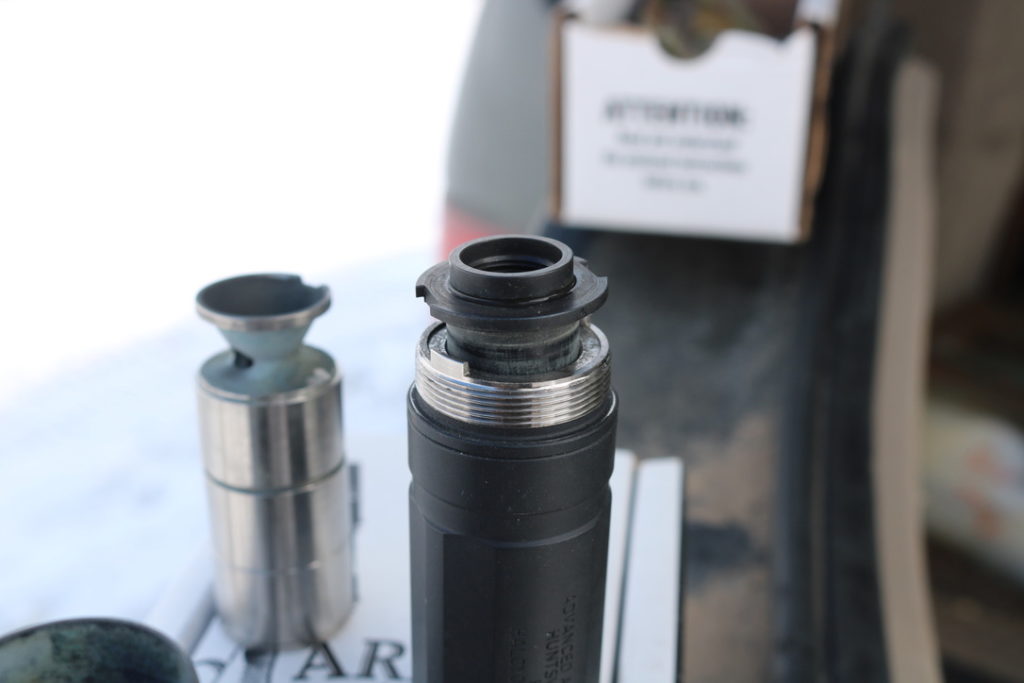 The Halcyon is fully user serviceable, which is to be expected in 2019. The lesson of a welded can on a rimfire was learned a while back and learned hard by some of us. No real surprise there. The big deal about the Halcyon is not that you can take it apart, it’s that it is modular. Right out of the box, it can be configured long or short. 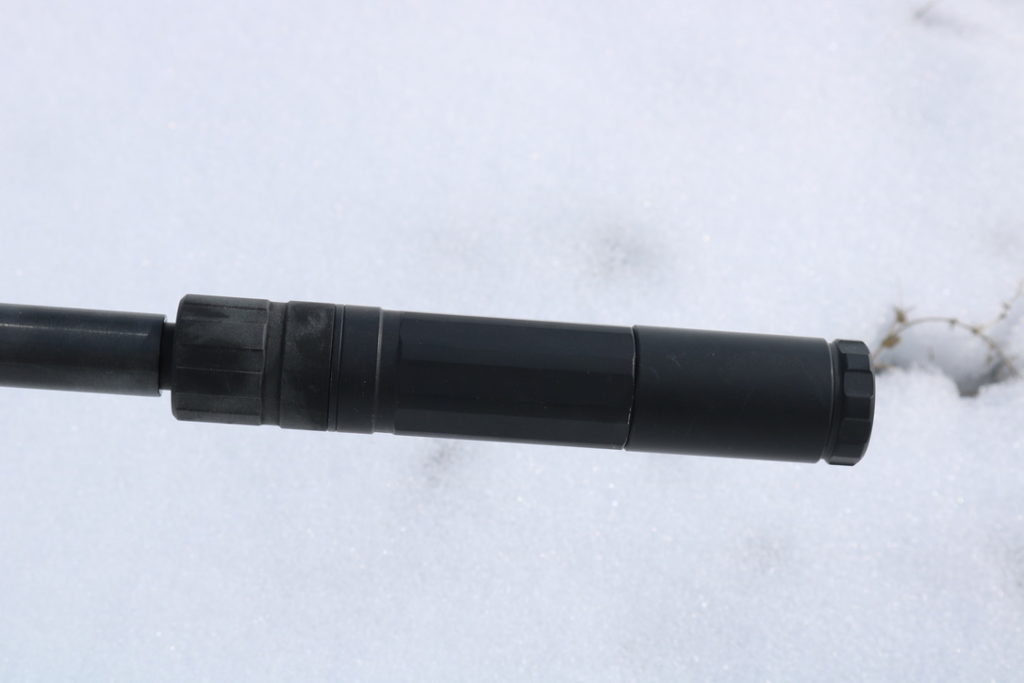 Close up in long configuration.

The diameter remains the same, right at 1 inch. That has gotten to be near standard for rimfires, as the engineers all push the limits of air volume. But the Halcyon breaks very nearly in half, depending on how much baffle you need. The long version, more appropriate for pistols or 22 Magnum, is a mere 5.2 inches long. Already pretty small. But in short configuration, appropriate for 22 LR rifles, it damn near disappears. It shrinks to a tiny 3.4 inches, barely longer than an AAC flash hider.

In order to stay slim, but maintain performance, the Halcyon has a mix of materials used. The main tube is titanium, while the forward tube is 7075 aluminum. Both are finished in Cerakote for durability. The K-baffles are all titanium, while the threaded insert is stainless steel. This should give overall excellent durability, while staying light, tipping the scales at a measly 6 ounces. More importantly, the titanium baffles will take harsh cleaners, unlike an aluminum baffle stack. All the more important in a filthy rimfire can. 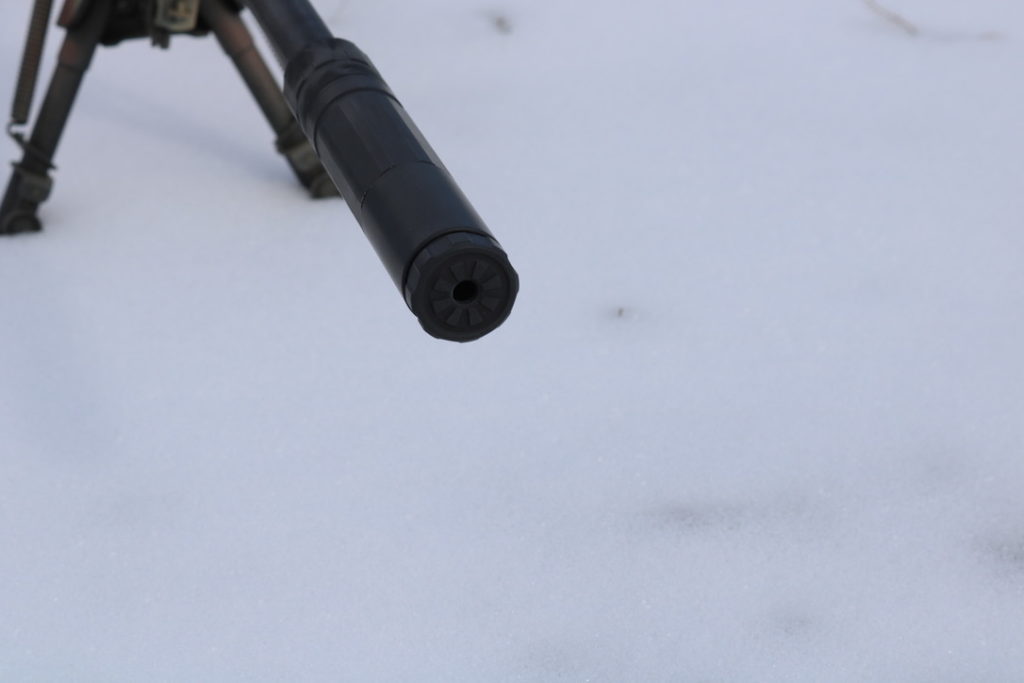 As a bonus round, I got early access to a new AAC accessory for the Halcyon. For a very long time now, rimfires have been a direct thread only. AAC did something different this time. Out of the box, the Halcyon is a classic 1/2x 28 direct thread. But as an add on, they now offer a tri lug QD mount. Add one of these to your favorite rimfires and you have the same quick attach option as your centerfire rifles.

Performance wise, I am very impressed. It is difficult with suppressors to give a real science answer. We are mostly left with opinion. GunsAmerica doesn’t have a lab, which would make any attempt at scientific readings highly subjective. All kinds of things have to be controlled to give a real apple to apple comparison, not least of which are humidity, air density, air temperature, and point of origin.

But I do have some experience with rimfire cans so my opinion isn’t worth nothing. With rifles, the short version of the Halcyon performs just as well as the long version. If there is a difference, it is near imperceptible to the human ear. At least one that has been attacked with rockets and machine guns on occasion. And like most high-end suppressors, it makes 22LR deathly quiet.

With pistols, it is a little bit of a different story. In the shorter barrels, 22LR has quite a bit more pop. To that end, the longer version gives significantly greater noise reduction. The long version is easily hearing safe, the short version……. Well, use the long version.

All in all, this is an excellent rimfire option. It is my new favorite and one I can highly recommend if you are in the market. At a street price of $375, it is very hard to argue with. 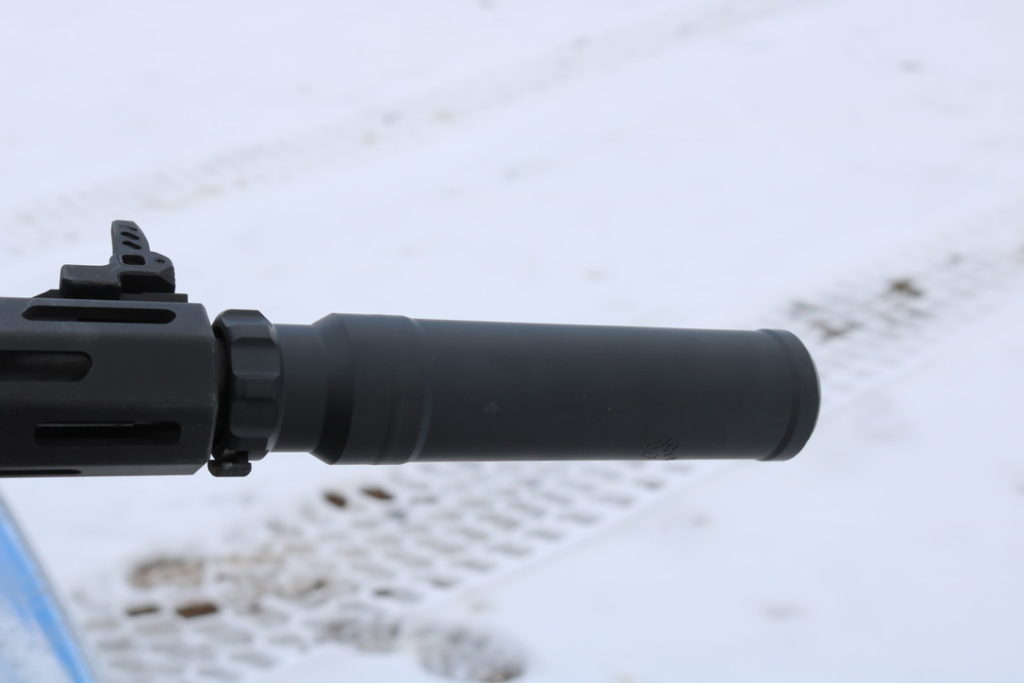 Close up mounted on SAINT Victor.

The new 556-SD is a 5.56 suppressor, based very much on the older AAC M4-2000. And that isn’t a bad thing. This is a hard use suppressor, so don’t go expecting lightweight magic. It isn’t overly heavy, at 17.6 ounces, it is competitive with other military-grade cans. But a titanium wonder it is not.

The M4-2000 was a favorite in some military circles, so it provides excellent DNA. When I say hard use, I mean hard use. It is a safe bet that a military suppressor goes through more rounds in a year than most civilian cans will in a lifetime. And not only did the M4-2000 gain entry to those circles, but it also developed a reputation for toughness. 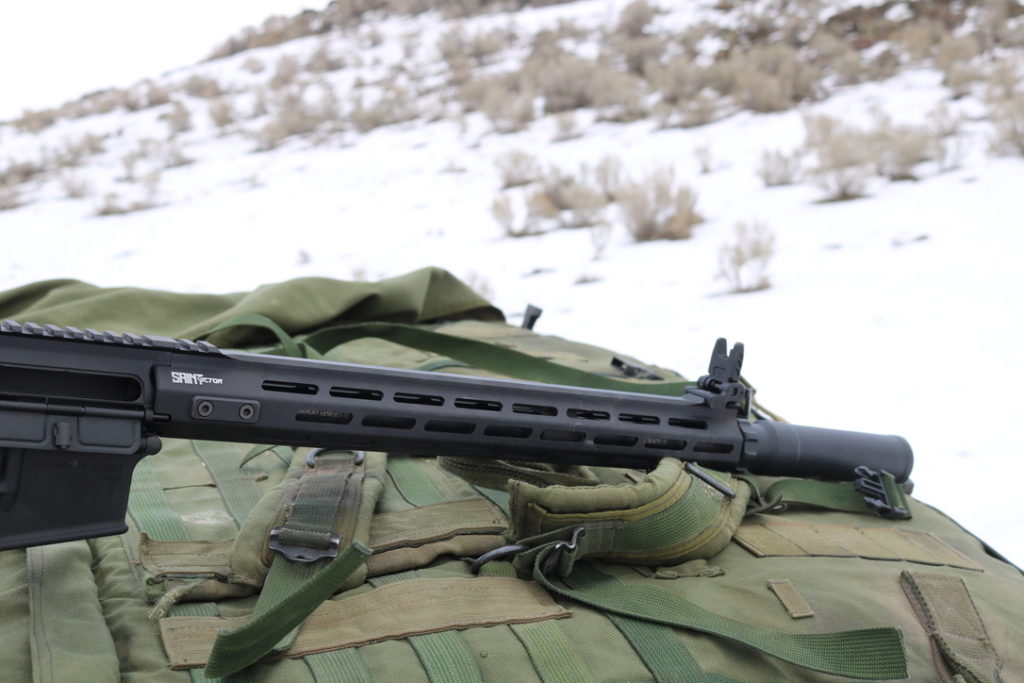 Cooling off after rapid fire.

The 556-SD is basically an updated M4-2000, with some minor changes. It is .4 ounces lighter, with the loss of 1 Db in suppressing ability. To the human ear, it is still excellent. 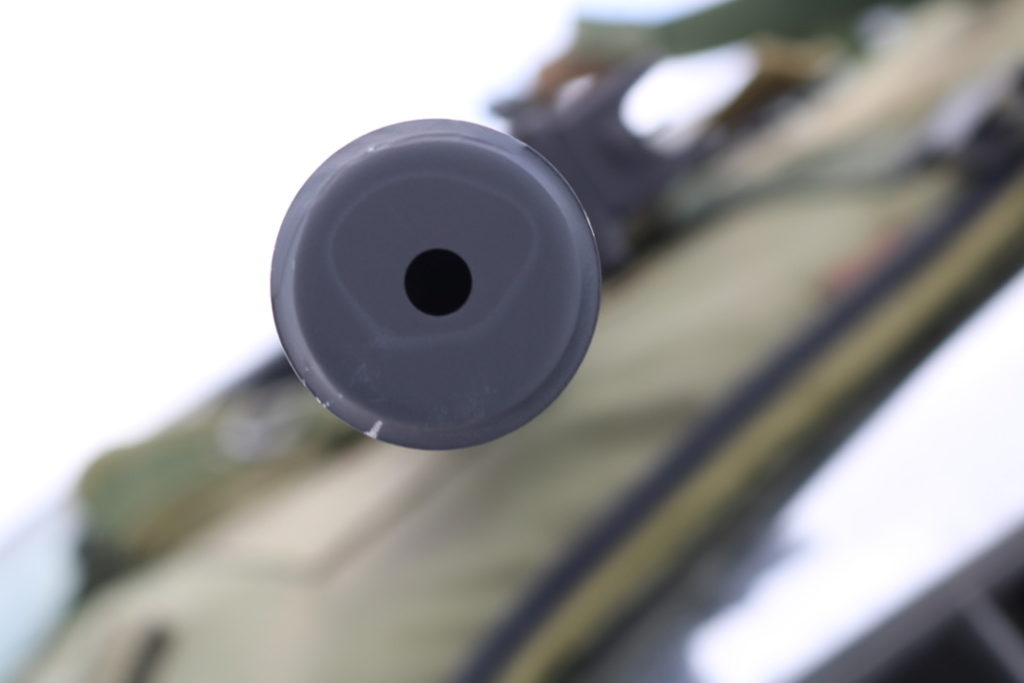 The best part about the 556-SD is that it is a fast attach model. Included is AAC’s excellent 3 prong flash hider, with the 51 tooth ratcheting attachment. Slide the can on, twist it tight, and the retention system locks into the teeth. No worries about the can coming loose, you are good to go. 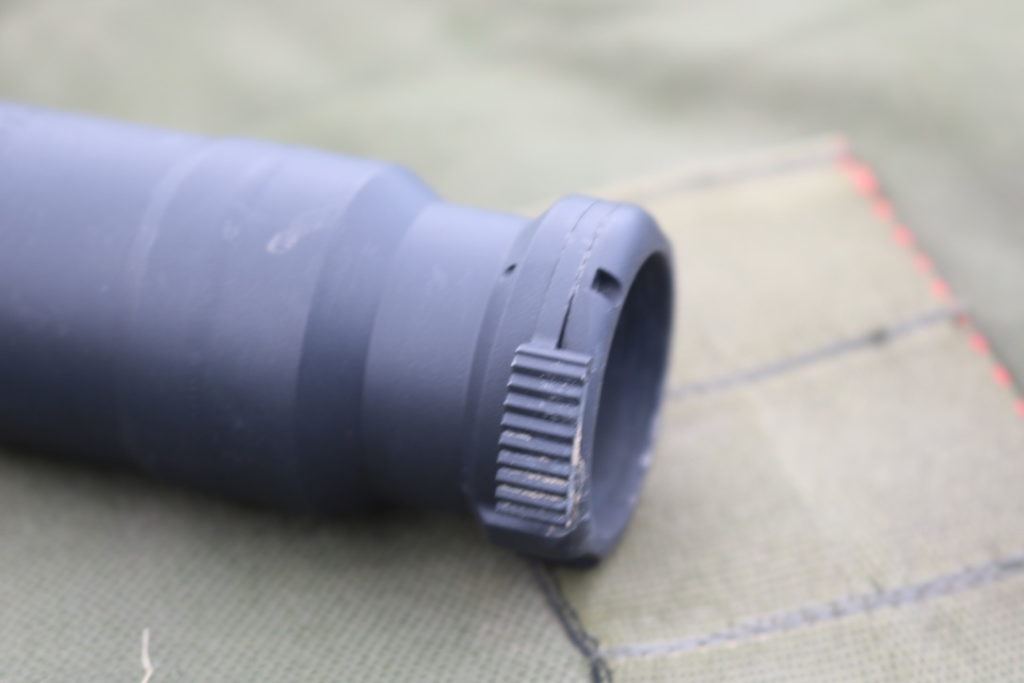 The 556-SD is a brawler, made to take anything you throw at it. Unless Uncle Sugar is buying your ammo, it will last you a lifetime, and then your designated heir. If you want a tough, no-nonsense 556 can, this is the one for you. And at a street price of $495, one I can also recommend highly. 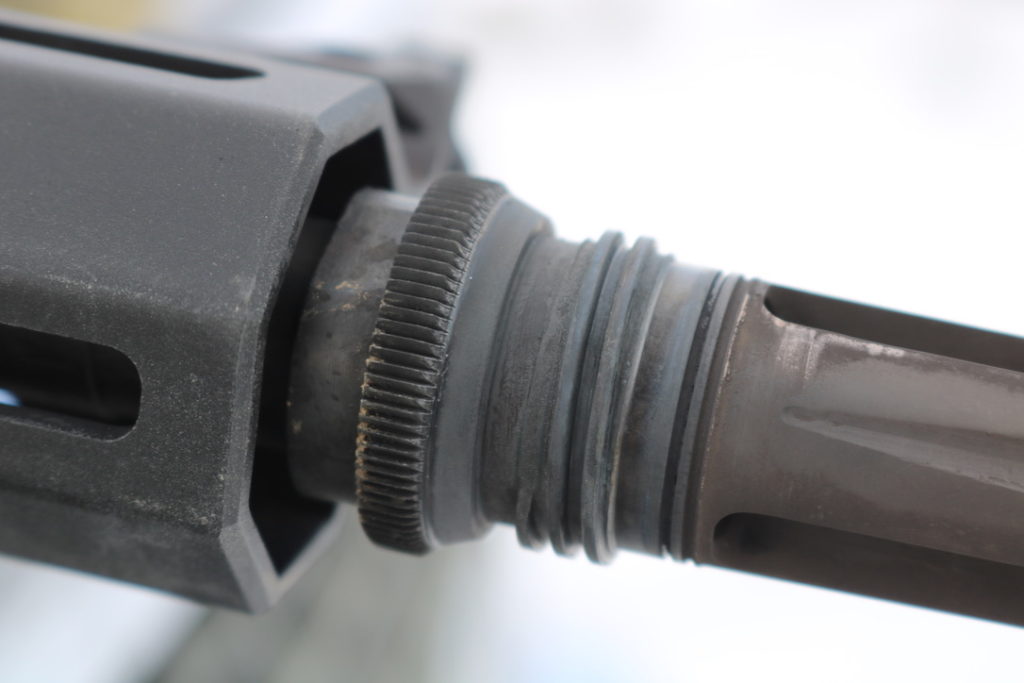 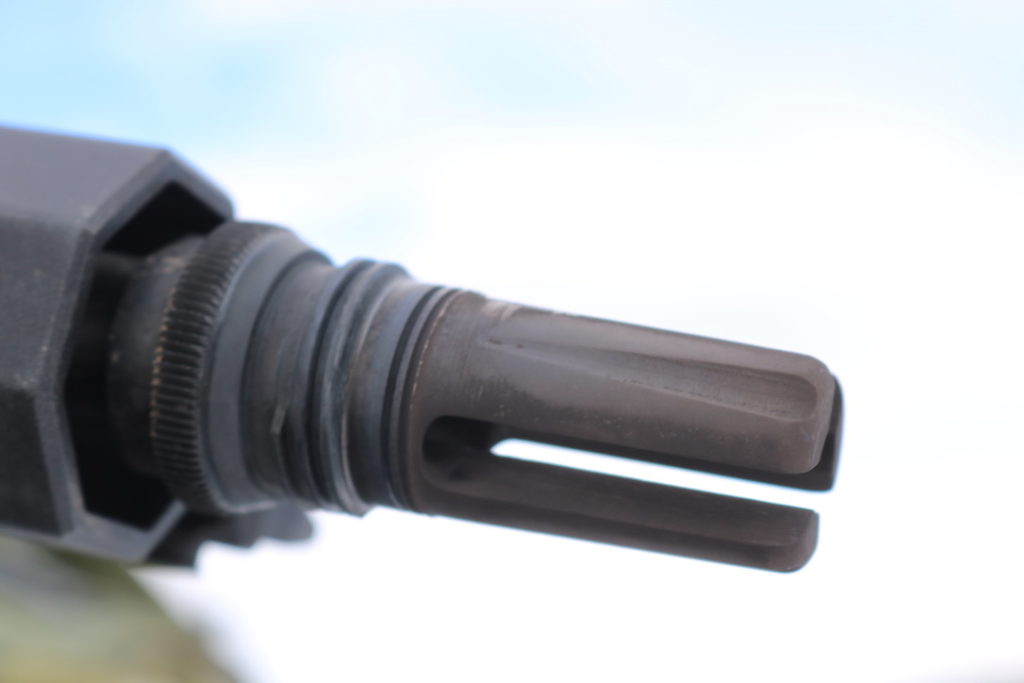 Previous post: The Army is Gearing Up for a Large-Scale War with Its ‘Big Six’