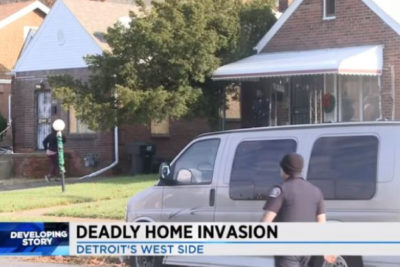 The woman refused to be a victim, and police say no arrests were made. (Photo: Screenshot, WDIV4)

A 55-year-old woman shot and killed a man who attacked her, her daughter, and another 75-year-old woman while they were leaving for church, Detroit local media reported earlier this month.

In what police are describing as a self-defense incident, the man approached the women in their driveway, forced them back inside the house, and refused to leave. The 55-year-old fired two rounds into the man’s chest, and he died at the scene.

“I didn’t hear nothing but a gunshot, and then I seen the police officer come down the street,” a man who identified himself as Fraser told local media.

He said at first he thought his neighbors had been shot but was relieved when he discovered the truth. Though robberies in that neighborhood have been on the rise in recent months, Fraser said he’s not worried.

“I still feel safe because I got something to arm myself with too, so I’d do the same thing,” he said.

The suspect, who police have not identified, was in his 30’s. Lt. Ron Lockhart of the Detroit Police Department said the women did not know the man, and it’s still unclear why he accosted them.

Other neighborhood residents say incidents like these have forced them to think about arming themselves, the Detroit Free Press reports.

“I don’t have a gun, I don’t want a gun, but I might have to have one,” Cynthia Wright told the paper. “They’re getting desperate. You can give them what they want, and they’ll still kill you. … You’re leaving out the house and they charge you back in.”

Another neighbor, Daryl Eckridge, told the Free Press that the women who were attacked are “real nice people” who stay to themselves. Eckridge says he owns a gun because criminals have gotten bolder in recent years. They used to rob empty homes and stay away from the elderly, but now “they figure you’re just an easy target.”

SEE ALSO: Chicago Woman Shoots Attacker with His Own Gun

“You have to do what you have to do. I hope it doesn’t bother her what happened,” Eckridge said. “Who knows what would have happened if she hadn’t (fired the gun). … I think it’s more than justified.”

The rise in criminality has prompted more women in the Detroit area to seek training in armed self-defense.

Firearms trainer Rick Ector told the Free Press that he’s seen a twelvefold rise in the number of women who participate in his free annual training classes. In 2012, 50 women signed up. In 2017, that number grew to 600.