Auction for James Bond Walther Blows Up Amid Controversy 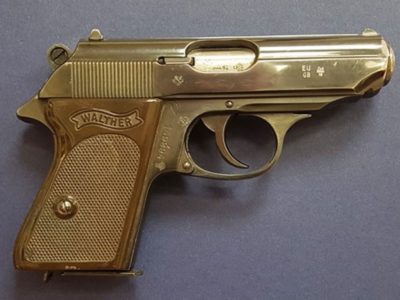 Was this the original Bond Walther? Turns out, that’s up for debate. (Photo: Humbert and Ellis)

What at first appeared to be the original Bond gun was headed for auction later this year at the Humbert and Ellis house, but that auction got canceled. It might just have been a scam. Or at least, an honest mistake.

The auction was for Bond’s first Walther pistol. It appeared to have all the necessary provenance, including a letter from its owner, none other than Bernard Lee. Lee played M in the classic Bond films.

According to the auctioneers, the filmmakers couldn’t get a prop gun on set in time, so he offered his own personal Walther for use. It was a real, working firearm, and as such, was later swapped out.

Lee later gave the gun to a friend, with an enclosed letter.

“Dear Jane, I know you will not accept anything in return for all your help and the kindness that you and John have shown to me throughout these trying times but my conscience will not let it go unrewarded.”

“Enclosed is a small token of my gratitude that I would like your boy to have as and when you see fit,” he continued. “This Walther pistol numbered 149894 is a small piece of 007 history.”

“As you are aware I have played the part of M in several of the James Bond films. The first of these, ‘Doctor No’ contained a scene in which Sean was scolded by myself about his choice of firearm.”

“His Beretta pistol was replaced by a Walther pistol. On the day of the take the pistol that was to be used was not going to be available, so I took into the studio and used for the scene this pistol which I have had for many years.”

“This pistol is there for the first one ever to appear in a James Bond film. Yours very sincerely, John Bernard Lee.” 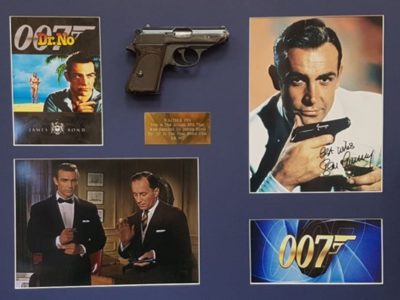 According to enthusiasts and experts alike, Bond’s first on-screen Walther was with the original PP, not the PPK. (Photo: Humbert and Ellis)

There’s just one question: did Bond first use a Walther PPK in the first film “Dr. No,” or did he use a Walther PP? The debate has people scrambling to pause footage everywhere.

The auction for the handgun, which includes a signed photograph of Sean Connery, the first James Bond, was for a PPK. However, film buffs say that the first Walther Bond picked up on screen was the PP, not the PPK.

Even with the solid provenance, the auction house quietly pulled the offering. “Given such a tide of differing opinion, the only course was to regretfully withdraw it, pending further diligence and investigation. Even the experts cannot agree.”

This may be a real Bond gun, but is it his first Walther? We may never know.

Next post: Scalise Explains to Whoopi Goldberg of ‘The View’ Why He is Still Pro-2A

Previous post: Accufit for an Ambush – a Savage Success!