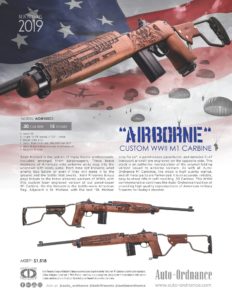 The “Airborne” is a laser-engraved tribute to the paratroopers of World War II. (Photo: A.O.)

“Kahr Firearms Group and Outlaw Ordnance worked closely together on the ‘Airborne’ M1 Carbine and other custom projects,” said Auto Ordnance in the announcement. “Outlaw Ordnance, based out of West Monroe, Louisiana, is a growing firm, changing the firearm industry with custom designs and innovations.”

All of the embellishing is laser-engraved to ensure top quality across the production run. The forend showcases a battle-worn American flag with “WWII” carved beside it. The left side of the stock carries the image of St. Micheal, asking him to “Pray for us.”

On the right, on the pistol grip, is a C-47 with paratroopers streaming out of it and one safe on the ground. The stock is true to the designs used during World War II, making this collectible and shootable at the same time. 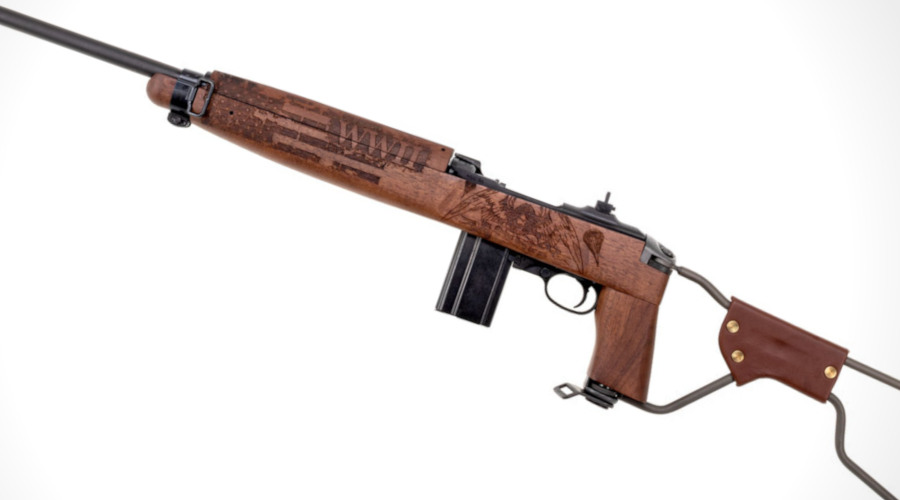 The Airborne has an 18-inch barrel with a flip-up rear sight and front blade sight. All of the wood parts are walnut and the steel components have a parkerized finish. Each gun ships with one compact 15-round magazine.

Like the originals, these are chambered for .30 Carbine and they accept standard M1 magazines including 30-rounders. The suggested retail price is $1,518 but in-store prices are typically less.

The “Vengence” pays tribute to those who served at Pearl Harbor. (Photo: A.O.)

Another laser-engraved option is the “Vengence” carbine. The Vengence is a World War II commemorative M1 with a fixed stock. It too features the American flag and WWII engraving without the image and words for St. Micheal.

The stock depicts the B-29 Enola Gay Superfortress and a battle scene in remembrance of Pearl Harbor.

The Vengence carbine runs a little less at $1,391. It too has an 18-inch barrel and comes with one 15-round magazine.

See Also: The M1 Carbine and the Story of War Hero Jack Lucas

Of course, if you’d rather not have an engraved model but still would like a new-production M1 Carbine to knock around, or maybe even personally engrave, Auto-Ordnance makes those too. Auto-Ordnance makes standard M1 Carbines and Paratrooper replicas starting at $1,036. They also have compliant models for restricted markets.

The M1 Carbine in all of its forms is still an effective and fun rifle. Combined with modern ammo it’s a handy, lightweight gun for small game hunting, plinking and self-defense.

Next post: NRA and Second Amendment Foundation File Suit in Washington over I-1639