The rifle is engraved with poetry written by Parker while on the run from the law. (Photo: Auto-Ordnance)

Auto-Ordnance, the company behind today’s Thompson rifles and carbines, is teaming up with Outlaw Ordnance to bring us the Bonnie & Clyde Tommy gun. This limited edition rifle is based on the 1927-pattern Thompson engraved and dressed up with a custom rust Cerakote finish.

“The Roaring Twenties created fame and notoriety for a new breed of outlaw,” said Thompson Auto-Ordnance. “These ‘motorized bandits’ roamed open roads, committing crimes and engaging in battles with lawmen devoted to their capture. Perhaps the most famous among them were the outlaws Bonnie Parker and Clyde Barrow.”

“These two criminals committed a long string of murders and robberies, ultimately leading to their demise in a fiery ambush by law enforcement officers. Despite their evil ways, both bandits became symbols of the time period and earned a role in American popular culture,” it continued.

Parker, with Barrow at her side, led a violent gang of killers and thieves at the height of the Great Depression. The two were openly romantically involved which drove them into notoriety almost as much as their high-profile murders.

The gang was made famous for killing police officers violently and in cold blood, as well as pulling off several bank robberies. But their bread and butter was holding up small businesses, especially gas stations. 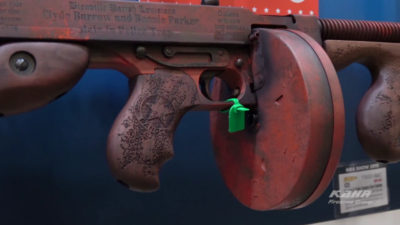 The rifle features engravings of the criminal duo, taken from photos and a wanted poster, as well as headlines of their escapades. The engravings also showcase the Texas Rangers and Frank Hamer, the lawmen that brought the pair down in a fiery showdown.

While Auto-Ordnance offers Thompsons in many caliber options this one’s chambered, rightly, for .45 ACP. The rust finish is actually a protective layer that will ensure that the steel receiver and 18-inch barrel stay in prime condition even if the gun sees a lot of use. The stock, grip and forward pistol grip are all American Walnut.

The Bonnie & Clyde gun was teased earlier this year at the NRA Annual Meeting and is now shipping with one 50-round drum magazine and one 20-round stick. Suggested price is $2,583 although real-wold pricing may be less than that. It is a special edition and probably won’t see the same type of discount as standard models.

Auto-Ordnance has been busy with special editions lately. The company released a series of World War II-commemorative M1 Carbines earlier this year, all with precise laser engravings.

By partnering with Outlaw Ordnance they are taking their finish to the next level. Outlaw Ordnance specializes in custom Cerakote finishes, laser engraving and stippling. The company does one-off work as well, so if you like what you see with the Bonnie & Clyde rifle but have your own gun in mind you can contact them yourself.