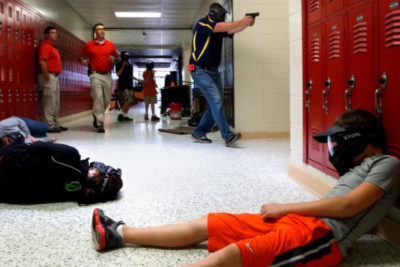 The Baltimore City School Board voted unanimously last Tuesday to oppose legislation that would have allowed school police officers to carry weapons during the school day.  The Board’s vote effectively killed HB31, a measure proposed by Del. Cheryl D. Glenn, a Democrat who sponsored the bill.

“I can’t move a bill that doesn’t have the support of the school board and the mayor,” Glenn said.  “The votes wouldn’t be there.”

Without a change in the law, the school police officers are only allowed to carry their service weapons while patrolling the exterior of school buildings before and after school hours.  At other times, all weapons are required to be secured.

Baltimore is the only jurisdiction within Maryland that employs a sworn school police force.  In all of the surrounding counties, local police or sheriff’s departments are responsible for patrolling schools.  They are allowed to carry weapons in schools during the performance of their duties.

The opposition vote took place during a public forum in which parents, students and members of the police union spoke both in favor and against the proposal.  The discussion was spirited.

Those who spoke in favor of the bill, including parents, law enforcement officers, and school principals, argued that the students in Baltimore deserve the same protection as students in outlying school districts.  They pointed to the lack of problems in those jurisdictions where officers regularly carried firearms and suggested that failing to allow Baltimore’s school officers to carry their weapons is a violation of the 14th Amendment’s requirement that all citizens be entitled to equal protection under the law.

The Baltimore Police Department is currently operating under a federal Consent Decree due to misconduct including widespread discriminatory practices focused on poor, black neighborhoods.  The Baltimore City schools are comprised of 78.6% African American, 11.3% Hispanic/Latino, and 7.8% white students.  One parent in opposition noted that of 90 arrests made by school officers, 89 of the students arrested were black.

Near the end of the public input portion of the meeting, students in a group called the Baltimore Algebra Project formed a line with their backs to the board members.

“No guns in schools,” the students chanted in unison.  “We gonna fight for our lives.”

The students refused to return to their seats.  As a result, the Board was forced to take a break from the proceedings.  Upon returning, the Board voted unanimously to oppose the bill.

Glenn, the bill’s sponsor, indicated that she was “very disappointed” by the decision.  She believed that the Board had given in to the pressure from the student group.

“I think this is a very unwise decision,” Glenn said.  “These are sworn police officers.  They are not security guards.  They have more training than Baltimore police.”

Next post: Kamala Harris Wants Congressmen in a ‘Locked Room’ with ‘Autopsy Photographs’ of Children Killed in Sandy Hook