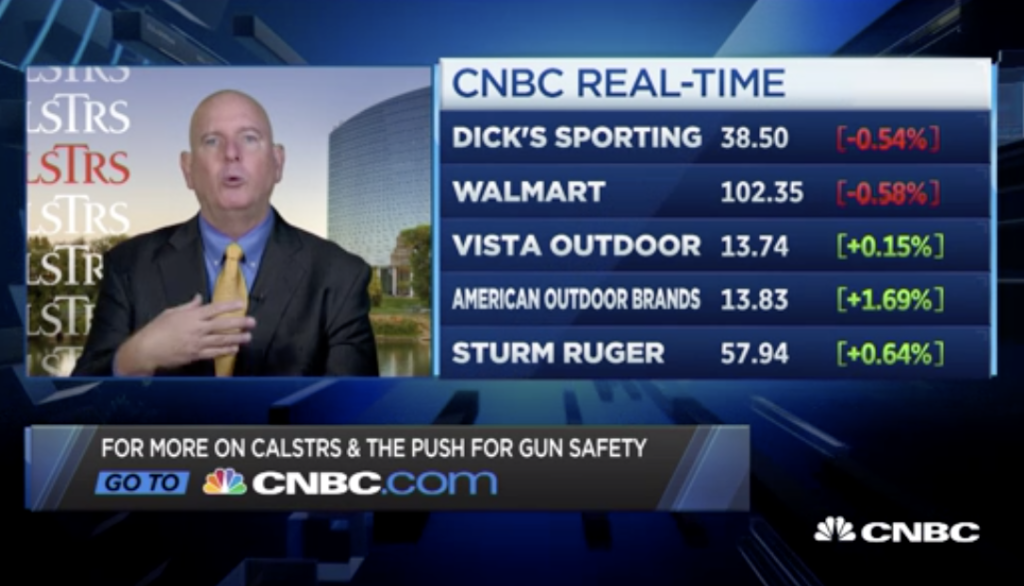 The CIO from CALSTRS pension fund calling on the firearms industry to be more responsible.  (Photo: CNBC)

The investors (see complete list below) who collectively manage more than $4.8 trillion (that’s “T” as in Trillion) released the five “Responsible Civilian Firearms Industry Principles” on Wednesday, saying in a statement that they “are meant to be sensible and not intended to be prescriptive in nature.”

Sounds good until you get to the part of the letter which states that those gun companies who fail to “publicly demonstrate and publish their compliance with each of these principles” will face apparent consequences as the signatories will “consider using all tools available to us as investors to mitigate these risks.”

Meaning what exactly? Probably that if you don’t fall in line they’ll cut ties. We’ve seen similar tactics recently in the banking industry. Citigroup and Bank of America have adopted anti-gun policies designed to put the hurt on gun owners and gun companies.

BoA, for example, announced that it would stop lending money to AR manufacturers. Citigroup said it would no longer do business with companies that sell bump stocks and “high capacity” magazines while also prohibiting its clients from selling firearms to any adult under the age of 21.

We’ve seen faith-based investors pull similar stunts in 2018. The Interfaith Center on Corporate Responsibility, in conjunction with investment firms like BlackRock and Vanguard, bullied Smith & Wesson and Ruger this year into putting together reports on the companies’ role in “gun violence” and what they’re doing to address the “risks” associated with their products.

Gun-rights advocate Alan Gottlieb sees this latest effort as nothing more than a thinly-veiled attack on the 2A.

“American firearms manufacturers, distributors and dealers are already extremely responsible,” said Gottlieb, the founder of the Second Amendment Foundation in an email to GunsAmerica.

“The groups and individuals behind this scheme are not friends of private gun ownership. They want to open a new front in the attack on Second Amendment rights,” he added.