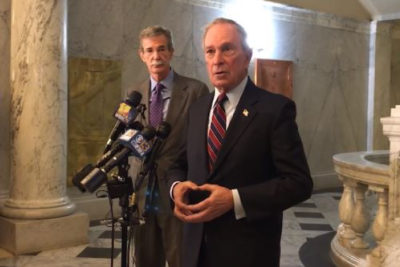 The gun control advocate has changed his tune when it comes to his alma mater.

Anti-gun kingpin and gun-ban bankroller Michael Bloomberg said in a press conference on Tuesday that his alma mater, Johns Hopkins University, should have an armed private police force to defend students and faculty from the more unsavory elements of Baltimore’s crime-ridden streets.

When asked about the current security force already working on campus, Bloomberg replied, “Yes, we have one, the question is, are they armed? When you have a city that has the murder rate that Baltimore has, I think it’s ridiculous to think that they shouldn’t be armed.”

Bloomberg argued that all of the other schools in Baltimore have privatized police departments where “they do carry weapons,” and Johns Hopkins should have the same.

His rationale is twofold. First, he believes that an armed security force can help reduce crime, which could draw more students to the university and patients to the hospital.

“Anything we can do to help the city reduce the crime rate… it’s irrational not to have it.”

He also believes that arming the police force currently on campus will help save the lives of the officers.

“I’m also worried about just the lives of the cops,” he said. “Police officers devote their lives to helping us, but they do have families. They want to go home to their families. I think trained police officers who are well-supervised and well-managed is the right thing to do.”

Bloomberg gave the press conference during a trip to the Maryland state capitol, where he met with lawmakers to discuss gun control, according to the Baltimore Sun.

While the former mayor of New York City believes good guys with guns might reduce crime and save lives at Johns Hopkins, he doesn’t believe the same about average American citizens. He’s bankrolled several groups that oppose gun rights in the United States, including Everytown for Gun Safety and Moms Demand Action.

Backed by the billionaire, both groups have spent millions in states around the country pushing for more gun control laws—including laws that restrict an individual’s right to carry a firearm for self-defense. Bloomberg has also funded a “news” organization dedicated to curtailing the Second Amendment rights of American citizens.

Most recently, the shortest man in gun control helped pass a massive gun ban initiative in Washington State that bans the sale of semiautomatic rifles to adults under the age of 21, creates a registry of gun owners, and establishes a 10-day waiting period for certain purchases.

He is reportedly planning a 2020 presidential run as a Democrat.