The MK1 Bullpup Chassis is made by MK Machining and allows you to shorten any Remington 700 pattern rifle by nearly a foot without cutting precious inches off of the barrel. There are several reasons this can be advantageous which include the ability to add a suppressor without the gun becoming unreasonably long, putting the weight further back toward the shoulder, making the gun easier to shoot unsupported and shortening the gun to be easier to store and carry. Because it is a chassis, this product also will further add to the accuracy of any rifle due to the innate nature of the design and construction. Although bullpup chassis is superior in theory, I put the MK Machining MK1 Bullpup Chassis through the wringer in order to get quantitative results on its performance and a qualitative opinion of its ergonomics because, no doubt, many of you will be skeptical. 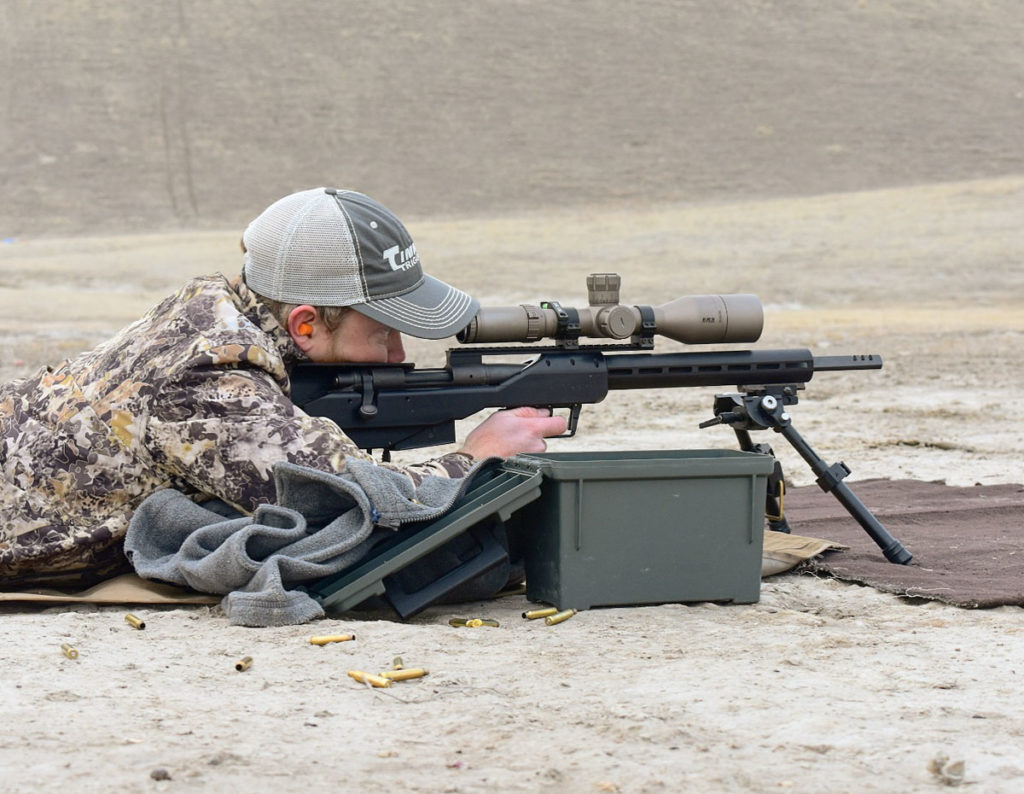 I found the MK1 Bullpup Chassis to be a pleasure to shoot. Although totally different from a traditional rifle, it was very comfortable and about 50% shorter (so it seemed). Long range shooting with this rifle was a new and great experience because of the way the gun recoiled, yet stayed on target.

A bullpup rifle is one where the action has been pushed back behind the trigger. Mechanically, this is the source of a few challenges around the trigger mechanism. Because of these difficulties, bullpups have gained a reputation for having mushy or heavy triggers. However, MK Machining has remedied this issue by designing their MK1 Chassis with a low friction linkage system and a custom Timney Calvin Elite trigger. Because of this, the MK1 Chassis has one of the lightest triggers I have ever felt on any rifle

With the trigger being the star of the show, the chassis is made from anodized 6061 aluminum and comes with an AR style grip and ambidextrous safety. The handguard comes with M-LOK style slots in it for the use of mounting any desired accessories such as bipods and lasers. The scope rail has a 20 MOA slope and is mounted at two contact points, one being the action of the gun and the other being the chassis itself. Naturally, the MK1 Bullpup Chassis takes AICS style magazines and uses a paddle style mag release. The cheek piece and butt of the chassis are fully adjustable with the pad having a bag rider built into it. And forgetting nothing, there is a spring loaded bolt release behind the magazine well. Overall, this package comes in around the 5-pound mark but carries its weight deceivingly well. The MK1 chassis was only produced for short actions, as is the MK2. However, I would expect a long action design to be produced in the future. 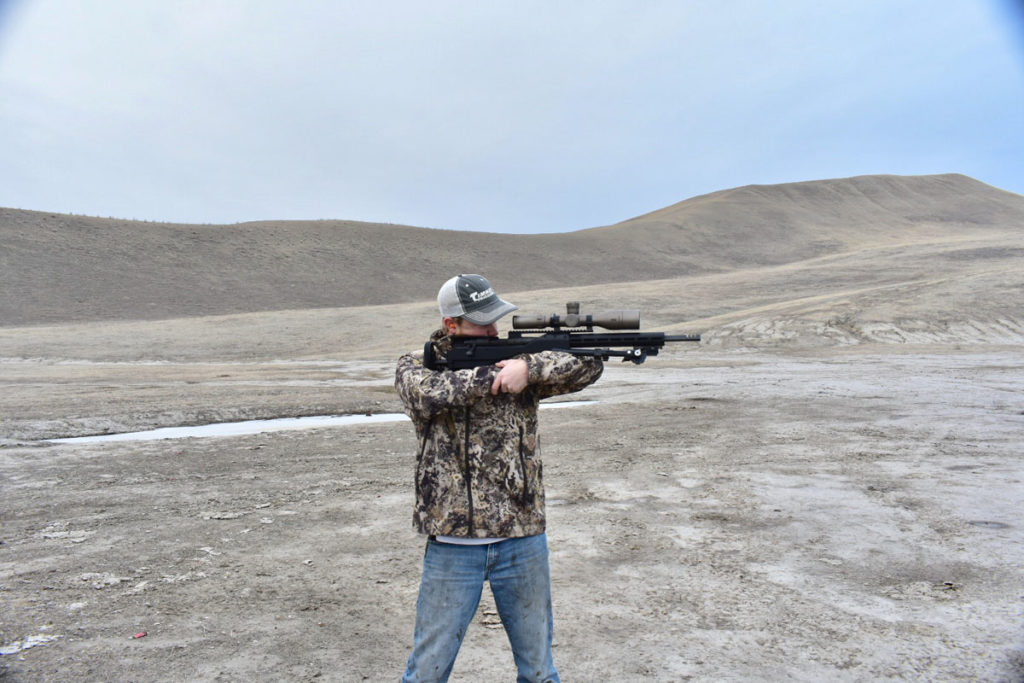 Because all of the weight is near the back of the gun, it felt like the barrel just floated in the air when “free-arming” the gun. I took this opportunity to try some different stances and found some of the less conventional to be more comfortable for myself.

Most chassis systems will improve the base level of accuracy for any rifle that is slapped into it. Because of this, I was curious if the accuracy of my Remington 700 VTR in 223 Remington would change between the factory stock and the MK Machining MK1 Bullpup Chassis. To test this, I set up a target at the 100-yard line and fired a couple of groups out of the bullpup and the same rifle in its original stock. (Here, I will apologize because I managed to show up to the range with only 7 bullets to test this with, so I opted for 3 shot groups.) With the factory stock, the rifle put down a 0.99 MOA 3 shot group. I do not consider this to be a great group, but it is typical of what I see with this rifle from day to day. But once I switched the barreled action over to the MK1 Bullpup Chassis, the groups improved to an amazing 0.29 MOA! My hunch was correct, but in this particular instance, the precision of my rifle grew by a substantial amount. 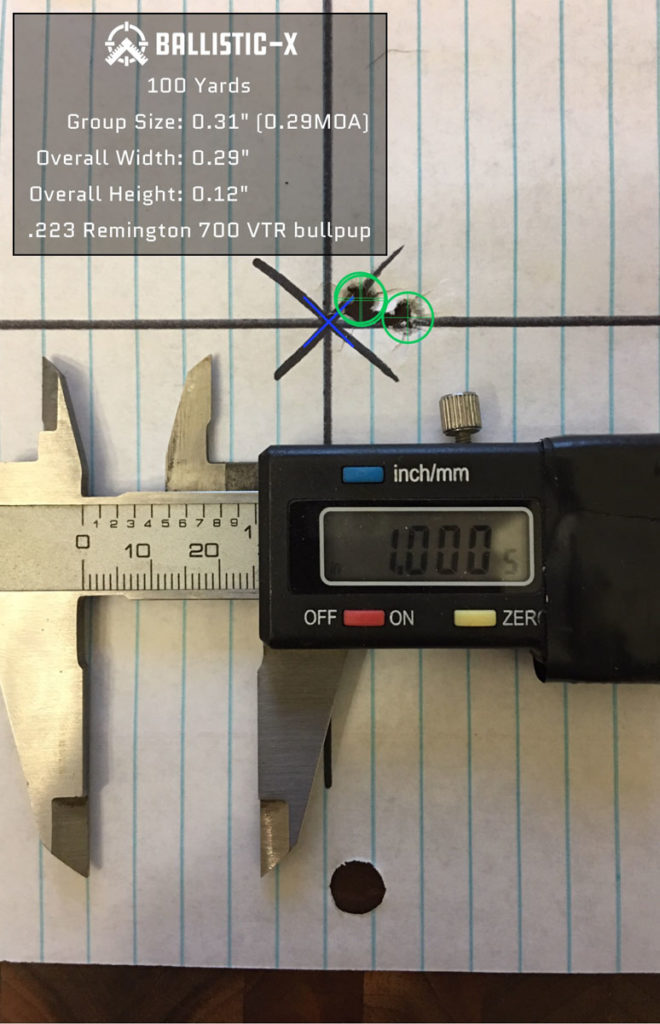 Comparing the rifle in the factory stock vs. the MK1 Bullpup Chassis showed that the chassis improved accuracy. This is important no matter what style of shooting you enjoy. 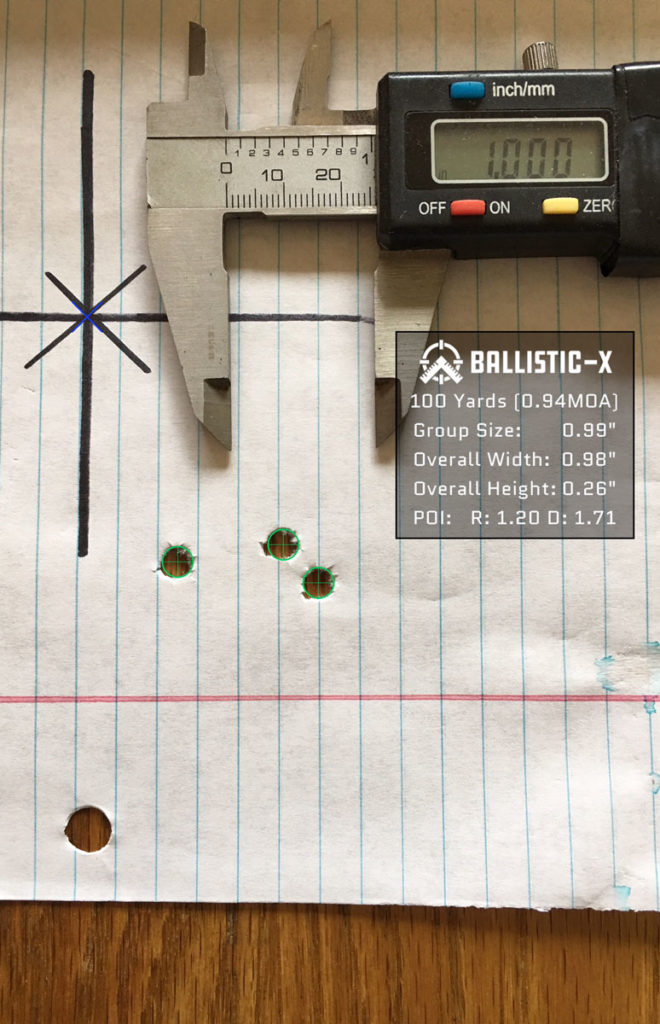 Because I am focusing on this being a precision rifle stock, it is only fair that I did some long range shooting with it. Compared to the traditional stock, the MK1 Bullpup Chassis was a completely different shooting experience. Yes, obviously reloading (working the bolt) is different, but the way the gun recoiled, the stability of the gun and sound of the gun is completely different too. To address reloading first, I will begin by saying that it is different from what my muscle memory is used to, but not in a bad way. I found that after using the bullpup chassis for a while, the motion from the grip to the bolt handle became natural. Because my hand moves rearward away from the grip, it was already heading in the direction of the bolt handle and in the direction I needed to pull the bolt at the beginning of the process. Due to this, I found the motion to be very smooth and efficient. MK Machining also includes a bolt extension which I opted to not use on this gun. However, it would bring the bolt handle closer to the grip of the chassis.

The other difference that I noticed was the way the gun recoiled. Because the bullet went off further back and in line with my shoulder, I found that the bullpup tended to have less vertical “jump” than the traditional rifle. This is useful in long-range shooting applications because the user is better able to keep the scope on target through the shot and spot hits or misses. Also, because of the weight being further back on the gun, I was able to more efficiently use my rear bag to its full potential. Placing more pressure on the rear bag lead to more stable shots and less wobble from my heartbeat and breathing as well. 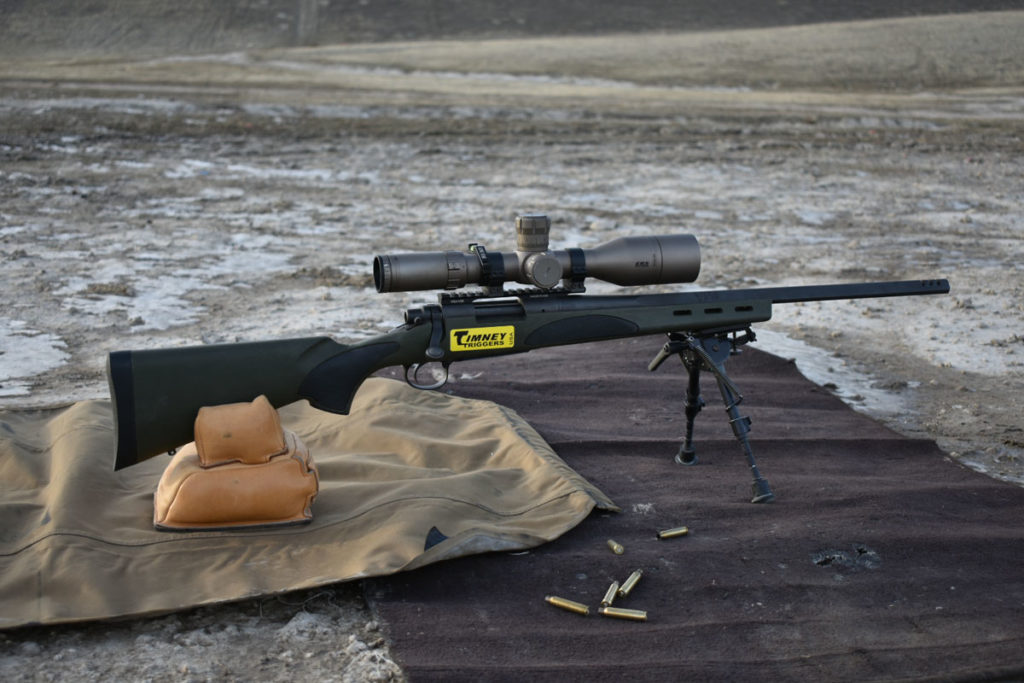 The original factory rifle that I was using to test the MK1 Bullpup Chassis is noticeably longer and obviously has less “cool factor” if that is important to you. In all seriousness, this gun is very front heavy because of the heavy barrel and plastic stock; the bullpup just feels better in the hands.

I shot the MK1 Bullpup chassis with different optics, optic mounts and from different positions which require different cheek piece height in order to use the gun properly. Because of the full adjustability of the cheek piece, this was not a big deal and I found myself able to get in the most comfortable position successfully with the turn of a knob or two. Also, the buttpad of the stock is adjustable for length of pull between 14.25 and 16.5 inches as well as 360 potential degrees of cant and 2 inches of vertical buttpad adjustability. Because of these features, the MK1 Bullpup Chassis will fit nearly anybody. 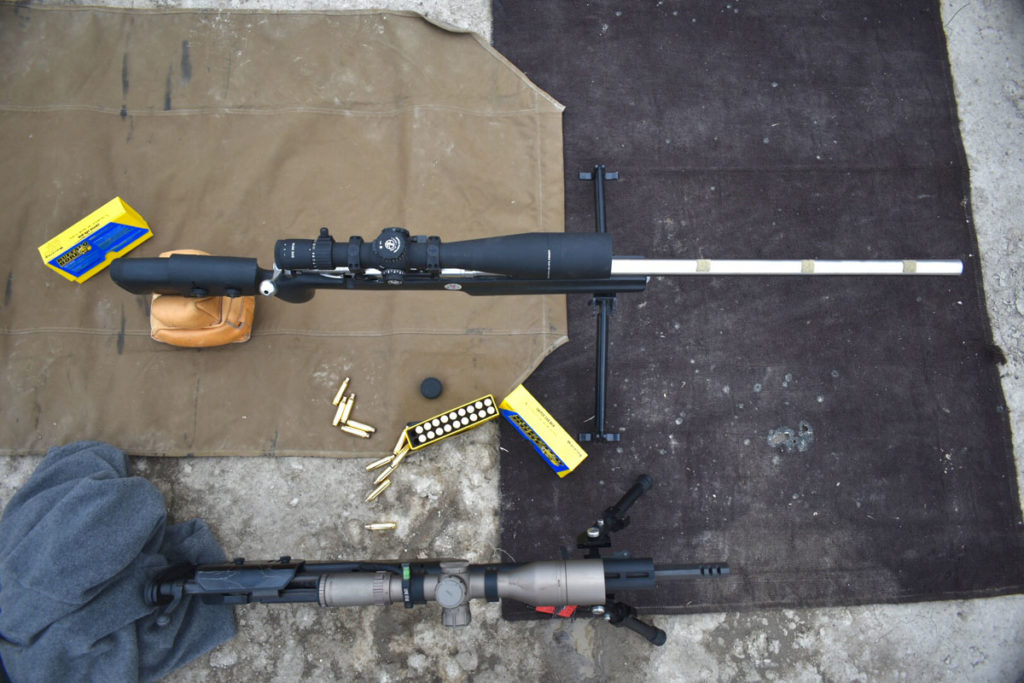 Whether you prefer the traditional long gun or the bullpup platform for long range shooting, both perform well although the bullpup acts differently upon the pull of the trigger. The traditional rifle tends to buck upward, but the bullpup seems to do less of that.

At the time that I am writing this article, MK Machining is currently producing an MK2 version of their bullpup chassis that has been revealed, but nobody has had the opportunity to really use it. This MK2 chassis will be available for pre-orders. Yes, pre-orders, because MK Machining is a relatively small company and they have to get a feel for the demand of their product before they fire up the machines.

This MK2 version is lighter, better looking and has improved ergonomics from the MK1 accompanied by the same great trigger system. 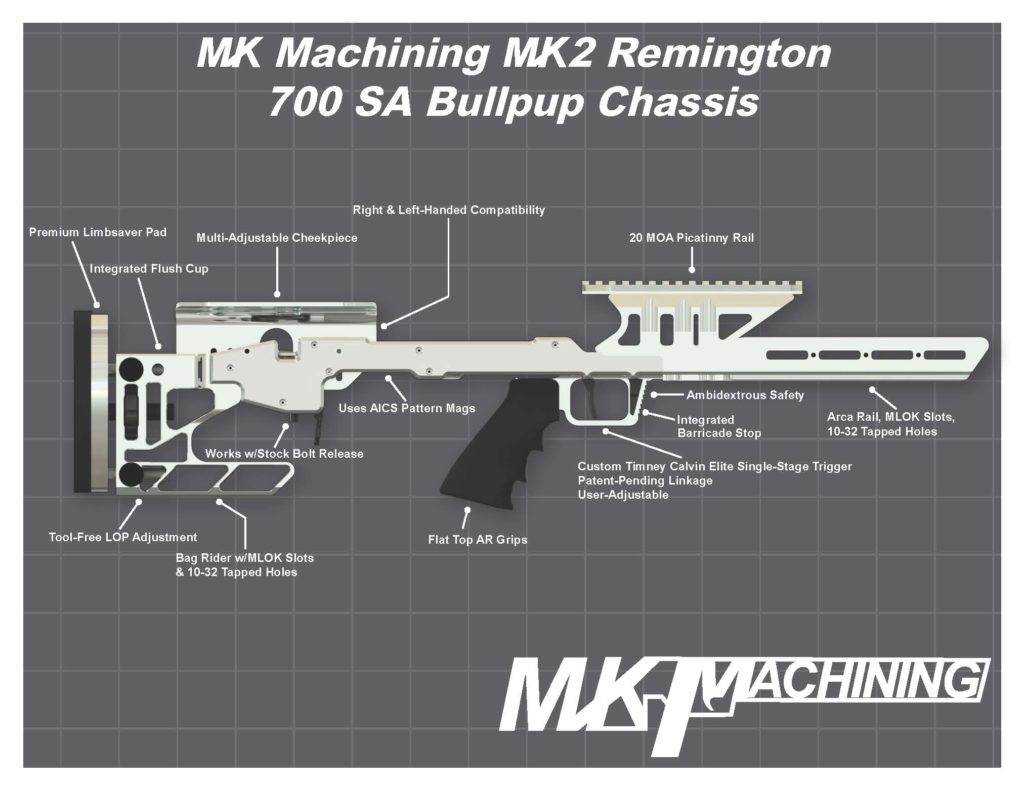 The MK2 chassis is a huge improvement on an already incredible product. This chassis boasts the same adjustability and length shortening qualities as the MK1 with a few added extras such as an Arca Swiss rail integral to the forend, a much more solid Picatinny optic rail and a streamlined design with a large weight reduction. The MK2 also comes standard with the Custom Timney Calvin Elite trigger so you can be assured that pulling the trigger will be a great experience. The MK2 chassis is available for preorder right now and consequently, the MK1 is no longer offered by MK Machining. 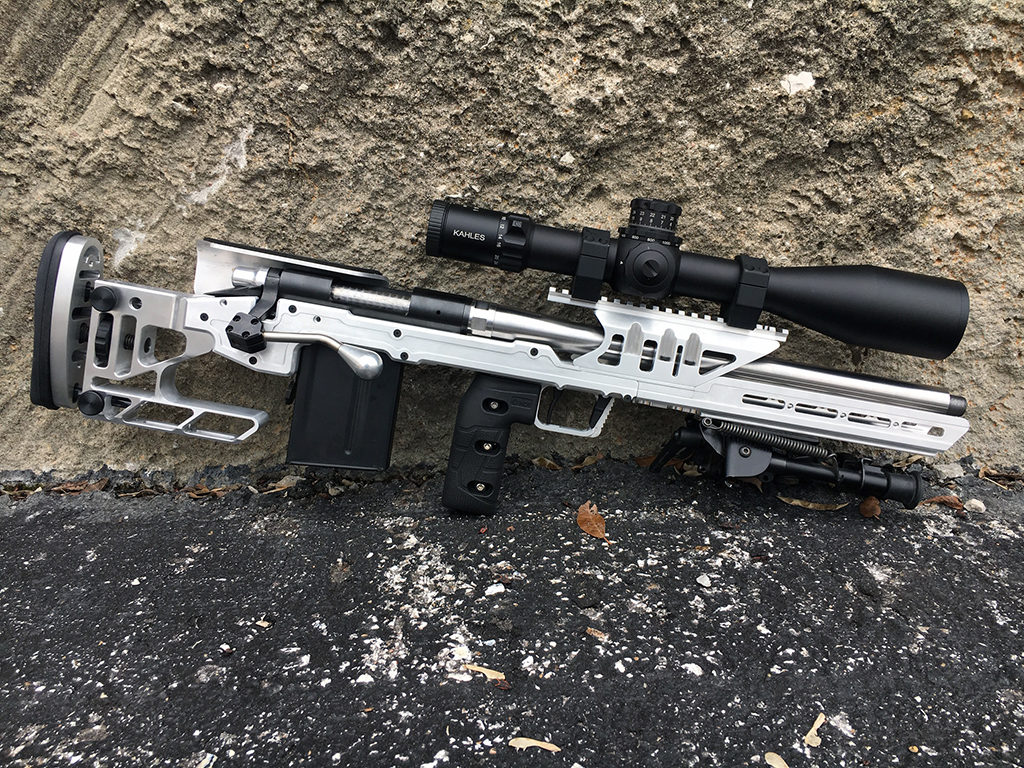 The MK2’s Bullpup design keeps the overall length down to a minimum on this 16″ barreled rifle. 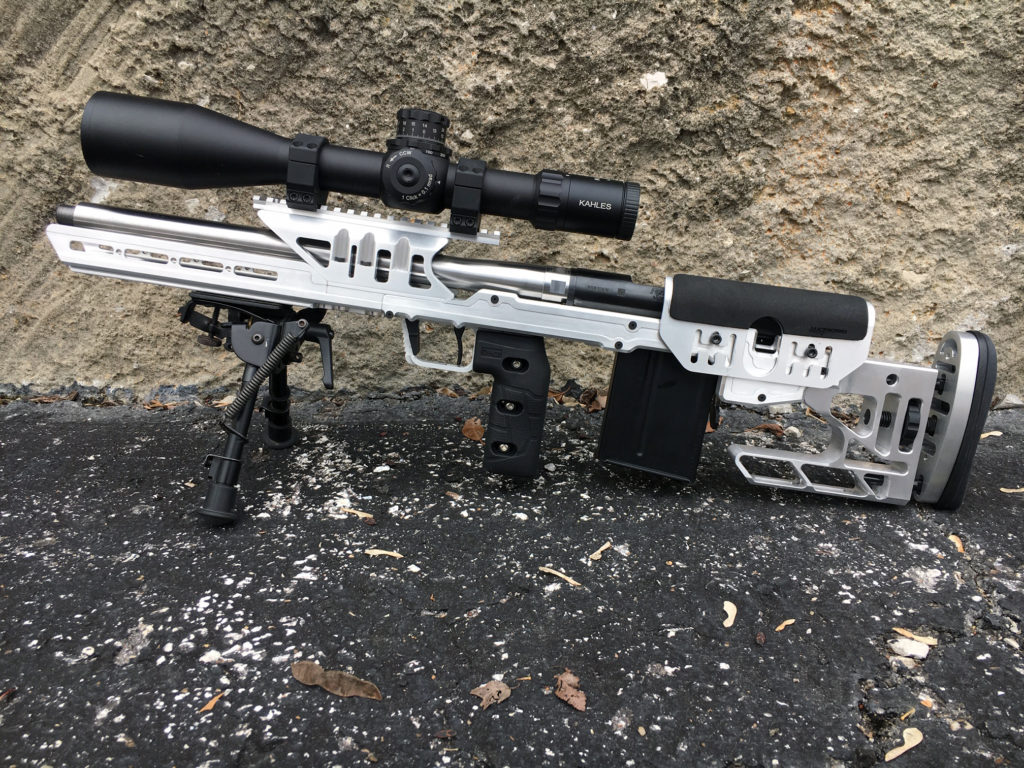 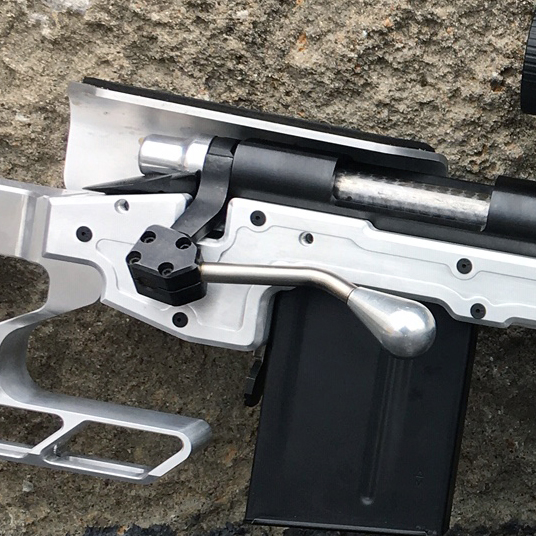 A close up of the included bolt extension. This add on brings the bolt handle further forward and closer to the shooter’s reach for ease of operation. 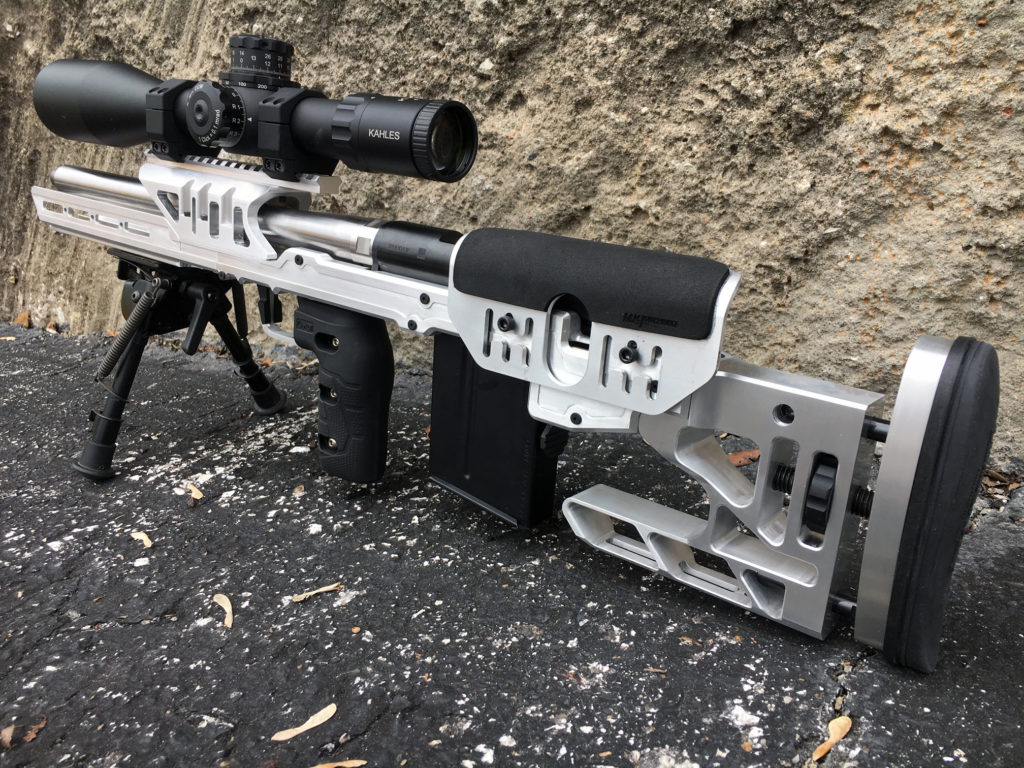 Next post: Three Shots That Doused the Light: The Assassination of Yitzhak Rabin