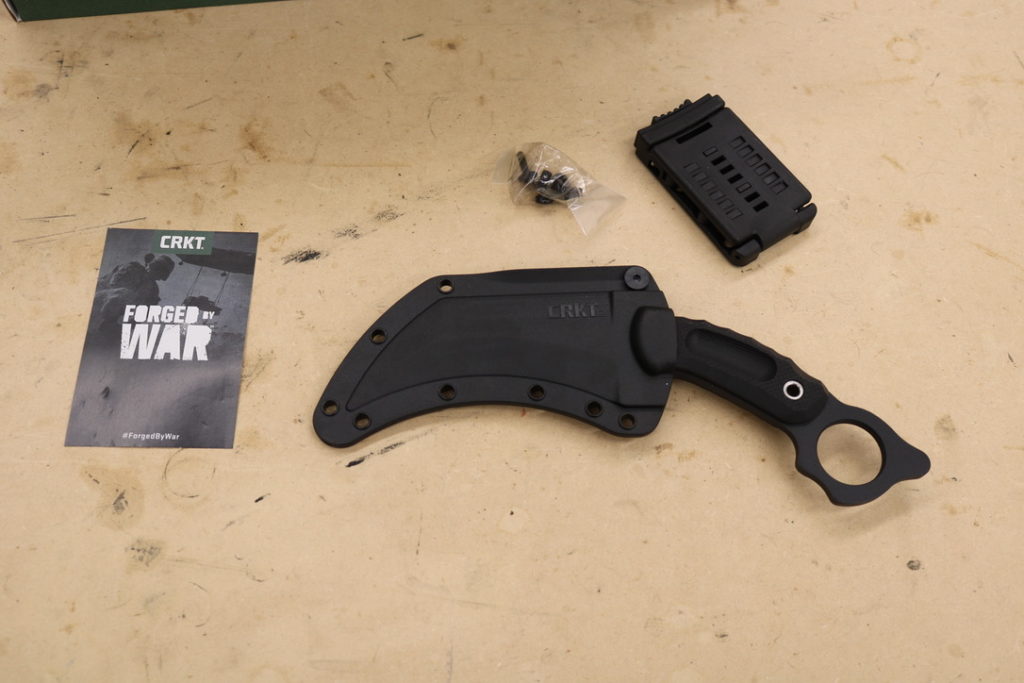 The Du Hoc from CRKT.

This week, we are taking a look at something a little different, the Du Hoc from Columbia River Knife and Tool (CRKT). I have said in the past, I generally think of a karambit as being an ideal weapon, if you are restricted to small blades. When we get up to large fixed blades, I say the jury is still very much out. I hesitate to argue with the classic Fairbairn–Sykes design, should one want a “fighting knife,” as in a knife that is only good as a weapon. And karambits definitely suck as utility knives. But reading the story on the Du Hoc, I had to check it out.

The Du Hoc comes from the CRKT “Forged by War” collection, same as the Tecpatl we reviewed last year. This is an awesome initiative by CRKT, with all the knives in the collection created by veterans. The new Du Hoc was created by Austin McGlaun, a veteran of the 101st Airborne and a police officer. While Austin has designed a few knives for CRKT, this one is special. Along the way of his own warrior path, Austin discovered that his late uncle won a Silver Star at Pointe Du Hoc in WWII. The Du Hoc Karambit was created and named in honor of Austin’s uncle. 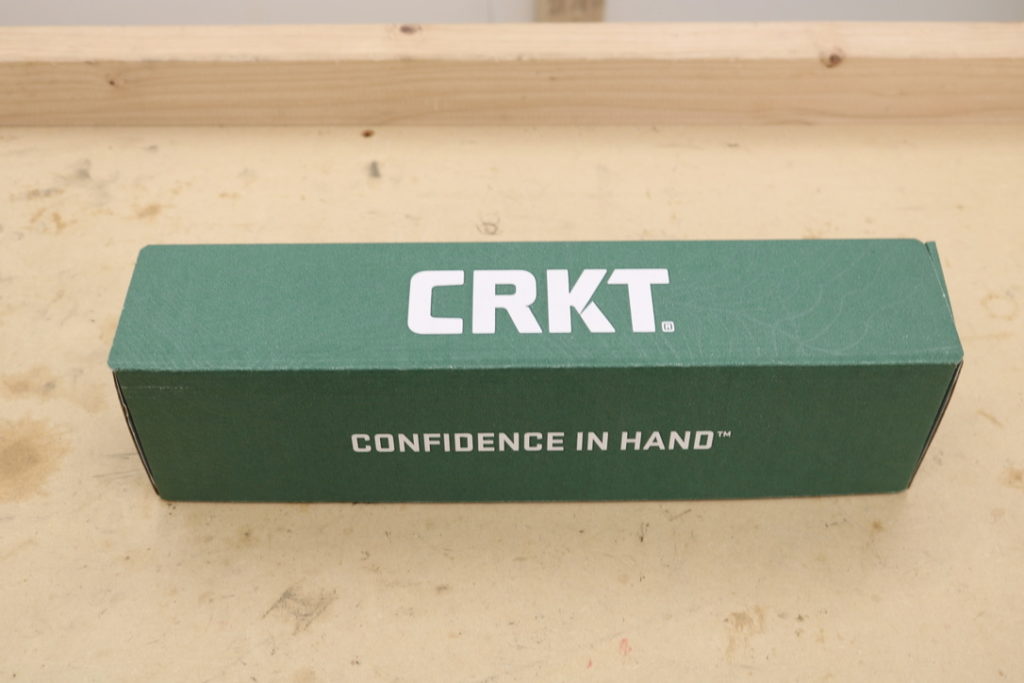 “Confidence in hand” is a very fitting slogan for the Du Hoc.

Pointe Du Hoc was an objective during the Invasion Normandy, critical to the landings at Omaha and Utah beaches. 2nd Ranger Battalion was assigned the task of scaling 100-foot cliffs and capturing German artillery positions at the top. Failure to do so would mean open season on main landing areas. Despite a near-impossible task and heavy casualties, the Rangers succeeded in taking the guns. Not only did they knock out the German artillery, but they also repelled counterattacks for two days until they were relieved by troops of the 29th Infantry. It is one of the greatest stories in U.S. Army history and absolutely part of the legend of modern Rangers. 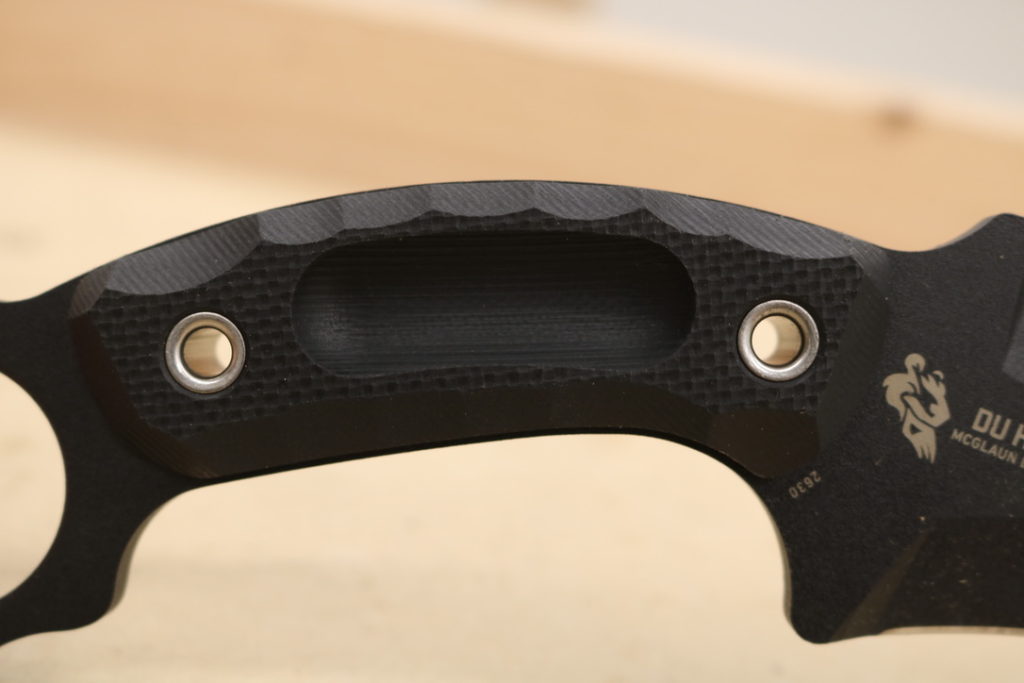 The G10 handles up close.

And the Du Hoc knife is a fitting tribute to those men. It is big and ugly, and nothing but business. It weighs in at a beefy 9.3 ounces, nothing dainty about this one. The blade is over 5 inches long, .2 inches thick, and sharp on both edges. Out of the box, mine was like a razor. The handle scales are G10, with a rough texture fitting to the job. 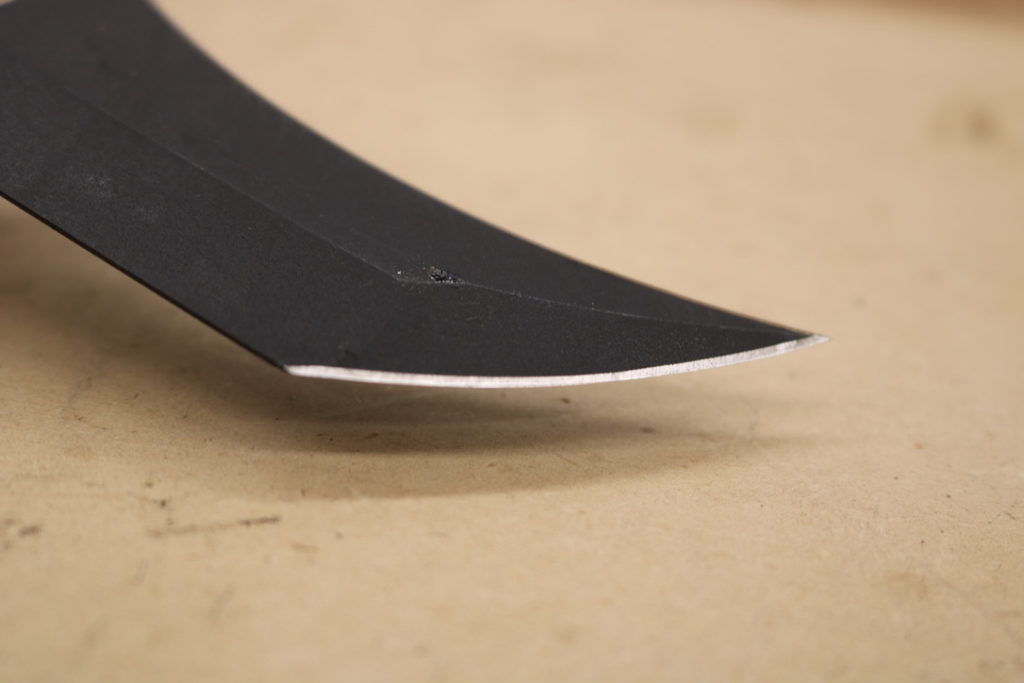 The outer edge is sharpened as well.

All that put together gives the knife a vibe. Like it talks to you when you hold it, which is a rarity among weapons. The feel from this one is all primitive. The claw-shaped blade screams saber tooth tiger. The handle is on the thicker side, but perfect for this piece. You won’t mistake that you are holding a weapon. And the size definitely says, “ Not one to be trifled with.” 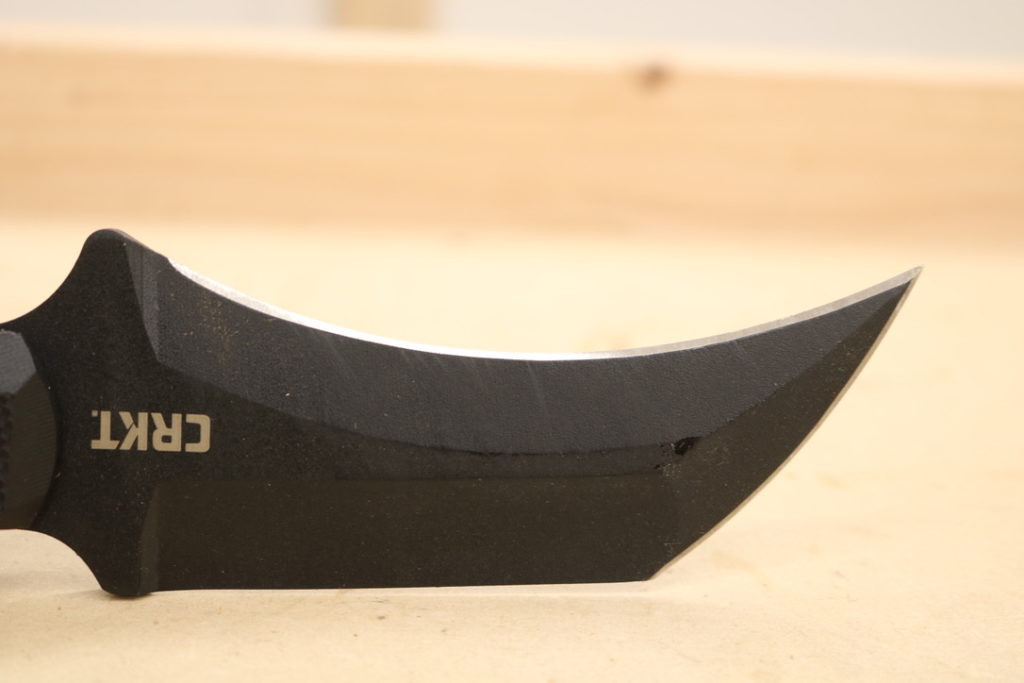 The sheath gets an A+ rating, a rarity even for high-end knives. It has enough retention that the knife won’t shake out, even upside down. The sheaths lines are clean and simple, nothing in the way. It has lashing holes for paracord, if that is your preference. But it also has an included Tec-Loc belt attachment, and the hardware to mount it. 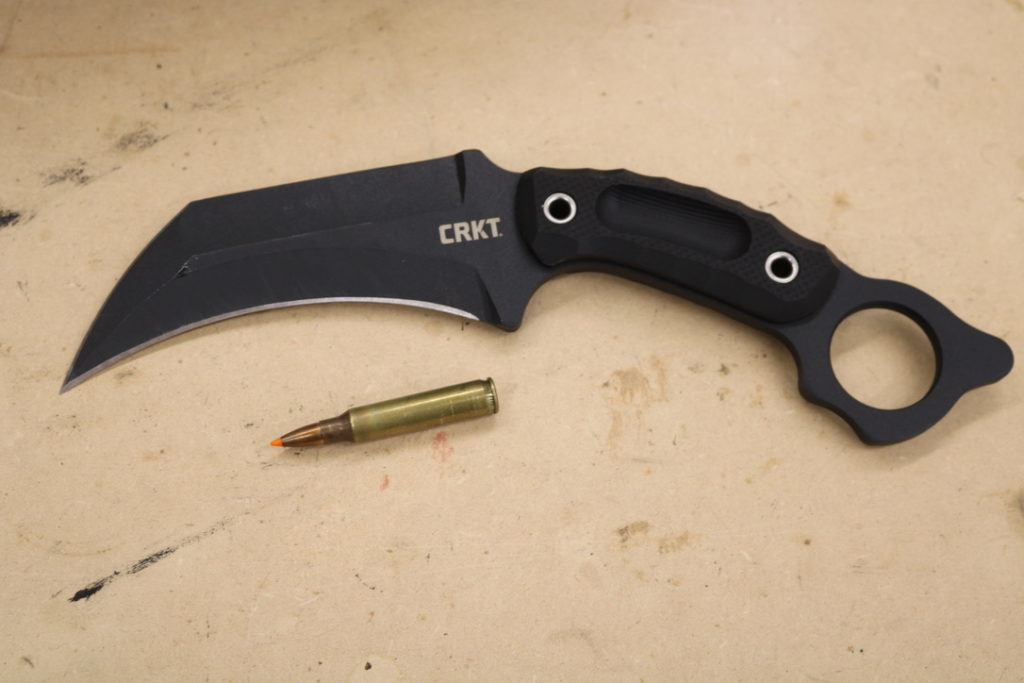 Pictured with a 5.56 round for reference.

In use, this knife is just vicious. It cuts like a razor, with blade geometry designed to do damage. It’s width would make stab wounds very hard to patch up. And it has a nice balance of size and weight, making it very agile. Combine that with power behind the karambit reverse grip, and you have a very capable weapon. 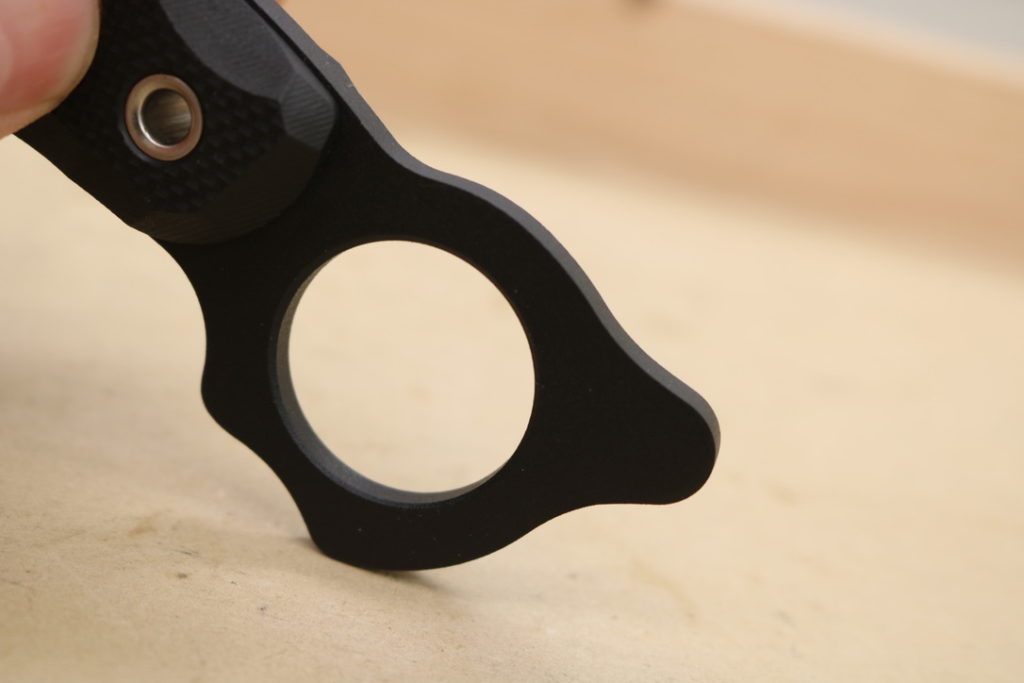 Loved the ring pommel on the Du Hoc.

This isn’t for everyone, that is for sure. But man is it cool. If you prefer your knives single-minded, this one is for you.  For more information visit CRKT.com. 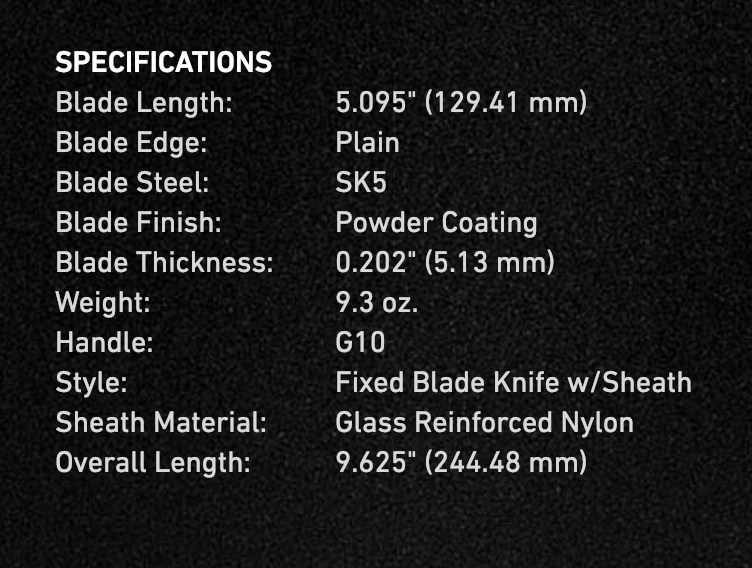 Previous post: H&P Manufacturing Admits They Have the Ugliest Suppressor and They are Proud of It – SHOT Show 2019