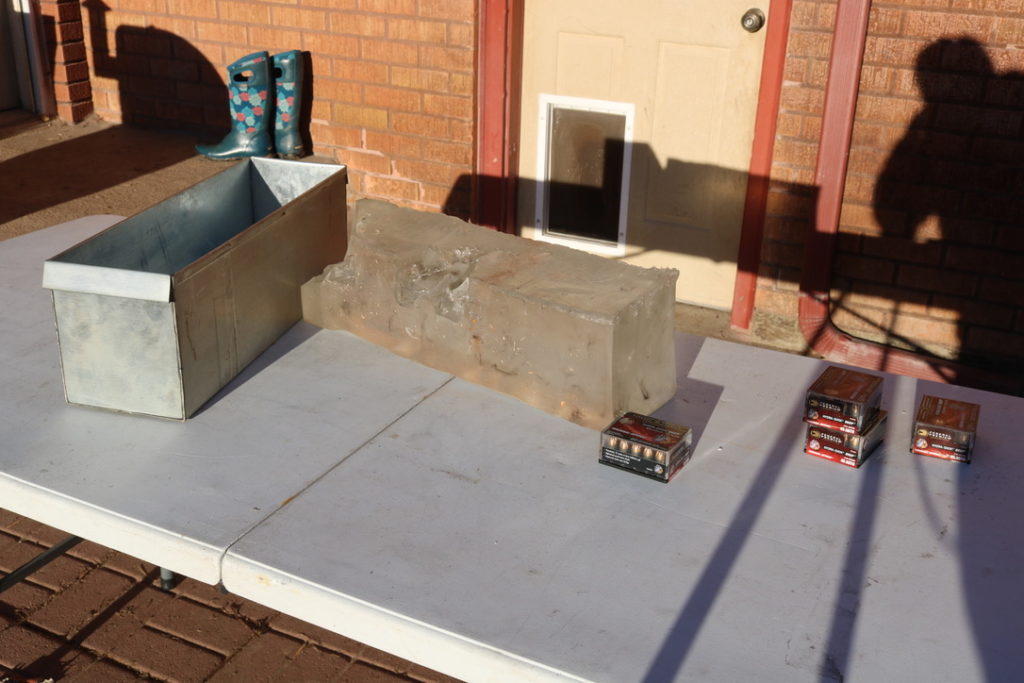 I am often wary of homemade testing protocols, made for internet consumption. “Bathtub gin is not only good, but it’s also good for you.” I guess I was employed by the government too long, with its hundred-page test parameters for a new pair of issue socks. But obviously, the government lab boys don’t always get it right either. “Works in any field conditions” comes to mind. This is particularly true when it comes to terminal ballistics.

Terminal ballistics is a subject near and dear to my heart, having performed some “field tests” myself. I would venture a guess most gun nerds have the same curiosity, it kind of comes with the territory. We all want to know how far it will fly, what it will penetrate, and if it will turn an enemy combatant into something that looks like it was poured out of a blender. Pellet rifle to tank main gun, we want to know all the answers.

Gel ready to melt for re-use.

But no subject is harder to test when it comes to bullets. Even the best of lab tests don’t perfectly replicate the human or animal body, nor take all factors into account. Nor has a bullet manufacture ever once released a test that says their product sucks. Things get murky quick when dollars are on the line. Statistics can and do lie, and a test can be designed to make anything look good. So what are we left with? 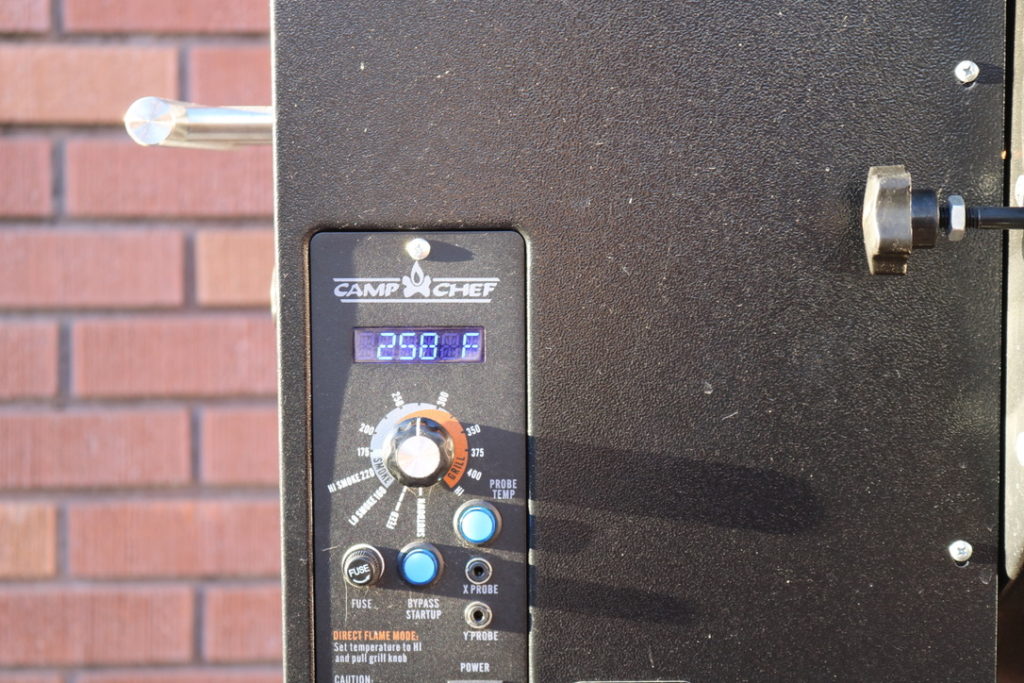 Temperature is important, but avoid the oven if possible.

In my opinion, we are left with a combination of data from reputable sources (FBI labs, outside of email investigations?) and what we can do ourselves. Mix those in a jar with hopefully some real-world data on shootings, and we get a decent idea of what our bullets will do.

Today we are concerning ourselves with self-testing and a new product I have been trying out. If you have been watching the channel over the last 8 months, you have seen me testing bullets in Clear Ballistic Gel, from clearballistics.com.

Clear Ballistic makes a great product that does a pretty good job of replicating tissue to test expansion and penetration. It meets the FBI test standards in 10% gel and the NATO standards in 20%. And best of all, it is economical enough for most peoples budgets.

Now let us be honest up front. Not once have I pretended to meet all the FBI standards 100%. I shoot outdoors, as most of you do. Even if it is indoors, I’m betting you can’t control the air temperature to a specific degree. (Unless Warren Buffett is also a ballistics nerd, in which case, yes, I would like to come over.) My Clear Ballistics product was calibrated with a 17 caliber pellet before it left the factory, but I have never attempted the same after a re-melt. 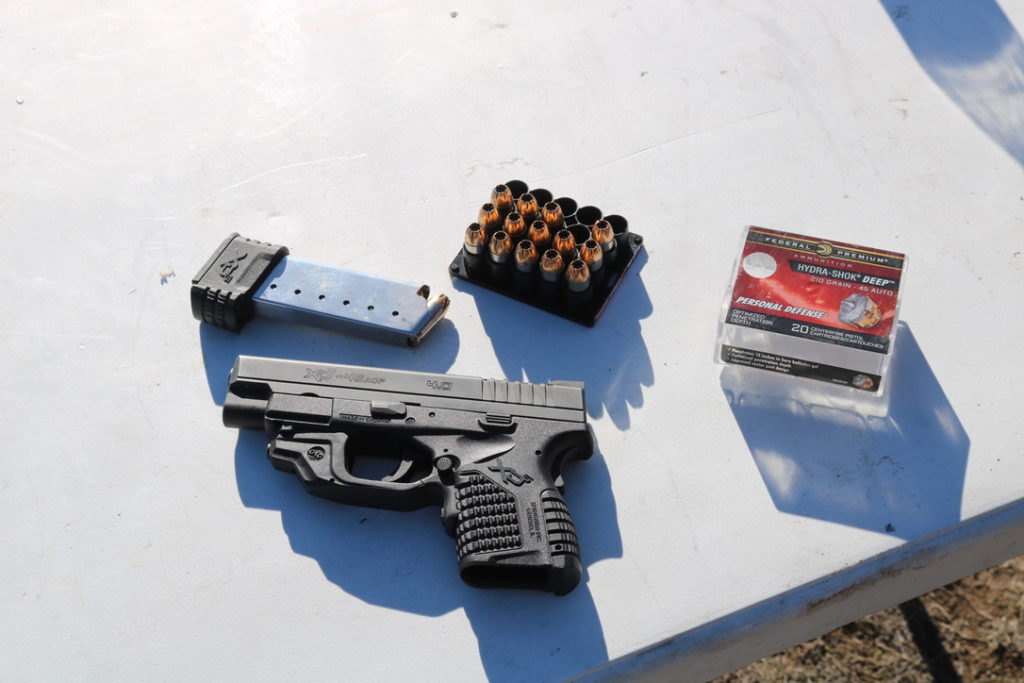 XD-S and Hydra-Shok, ready to prove themselves.

But deep down, do I care? Or should you? I say, in this case, no. Pretty close is good enough, and it still gives you some good data. If your bullet of choice won’t open in the gel, over several test samples, it is probably just not a good bullet. Besides, I have been around enough to know that human tissue composition isn’t the same across the board either. If we had the cadaver of a bodybuilder and a malnourished crack head, do you think the bullets would perform exactly the same in both? Me too.

I still like the gel over any other media I can acquire on the cheap to test with. Water jugs aren’t bad, but they aren’t great either. I have tried the wet newspaper bundles, which work, but give no idea of real penetration depth. At the end of the day, at least the gel blocks I had delivered to my house have some kind of consistency. 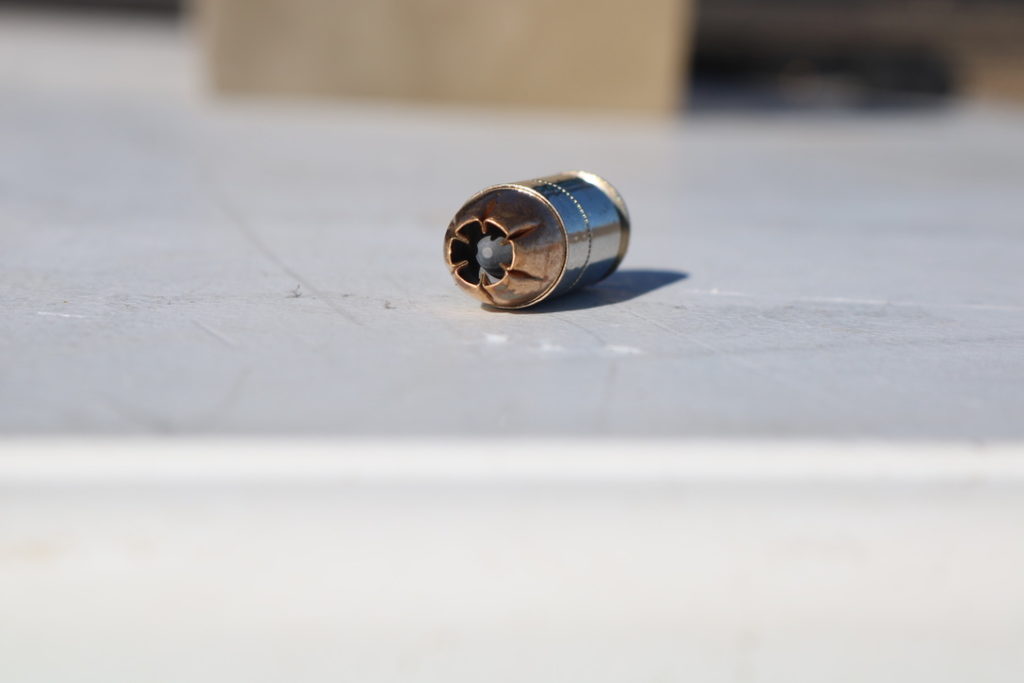 I am sure someone just clicked over to the Clear Ballistics website and thinks I am nuts for calling a $128.98 block economical. Oh, and most handguns will require two of them for good measure. It is all a matter of perspective. Because the best part about Clear Ballistics, with its synthetic gel, is that it is re-usable.

Unlike real gel, the Clear Ballistics stuff is not only shelf stable, but you can also use it over and over. No refrigeration and with just a BBQ grill or oven, you can melt it down at least ten times.

Now, do you need to buy your own gel? Not necessarily. If you trust me, I do a lot of testing for you. Guns to optics to bullets, me and the rest of the GunsAmerica crew put in some hours testing. But if you ever doubt us, $100 is a pretty cheap price of entry to find out. But for my money, there are other reasons you might want to drop a couple of coins on some ballistics gel.

First, it is a lot of fun. Maybe that is just the pocket protector and taped glasses in me, but I find this fascinating. Two, there are some things video doesn’t do justice to. This does look cool on YouTube, but it is way better in person. Insert your own joke here. And three, it is educational. If you are trying to get your kids into shooting or hunting, this is a great way to do it. Even as just part of safety training, the gel provides something that is hard to capture. If you are flushed up on cash, this is a product I can highly recommend.

Now we can’t go melting down ballistics gel and not use it, that would be un-American. John Moses Browning (peace be upon him) would not approve. Even if they didn’t have gel back then. Probably just shot bootleggers and convicts when they needed test media. Anyway, we have the gel melted, so what to use on it? 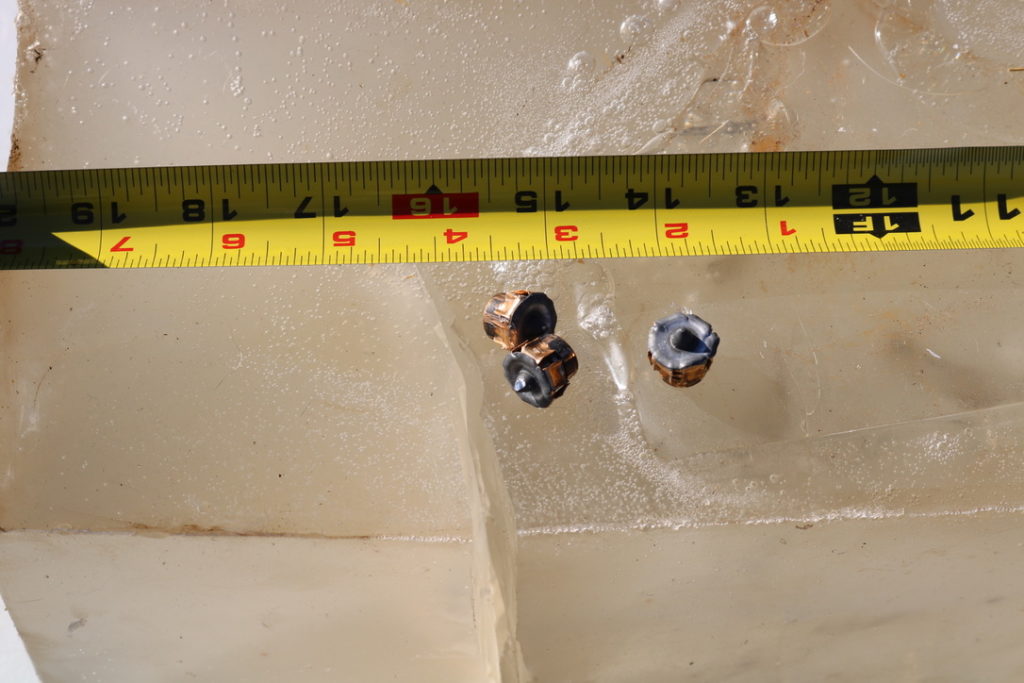 Fortunately, we were in possession of the new Federal Hydra-Shok Deep. (Insert deep joke here.) Hydra-Shok is one of the most storied names in personal defense ammo, but it was getting a little long in the tooth. It was first introduced in 1988, after an FBI request for a better hollow point. Hydra-Shok has remained a favorite ever since and is the duty round choice for many still today. But alas, bullet technology has come a long way since 1988. 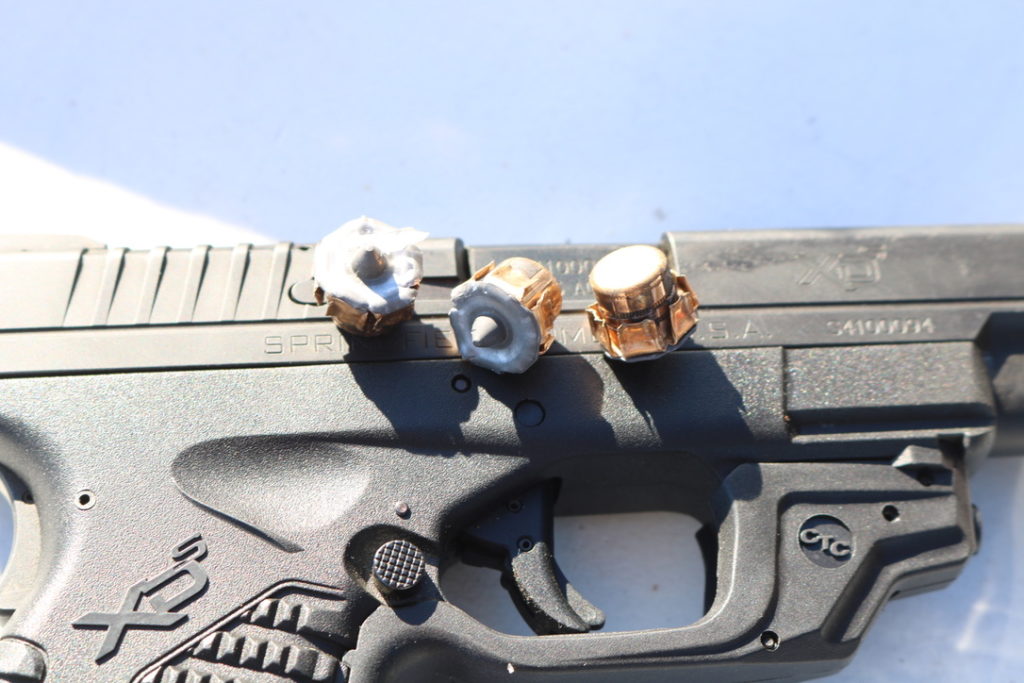 Federal went back to the drawing board with updates to keep the Hydra-Shok relevant. The classic center post in the hollow point remains, but is much more robust. The core has been redesigned to better defeat barriers, in line with other modern bullets. 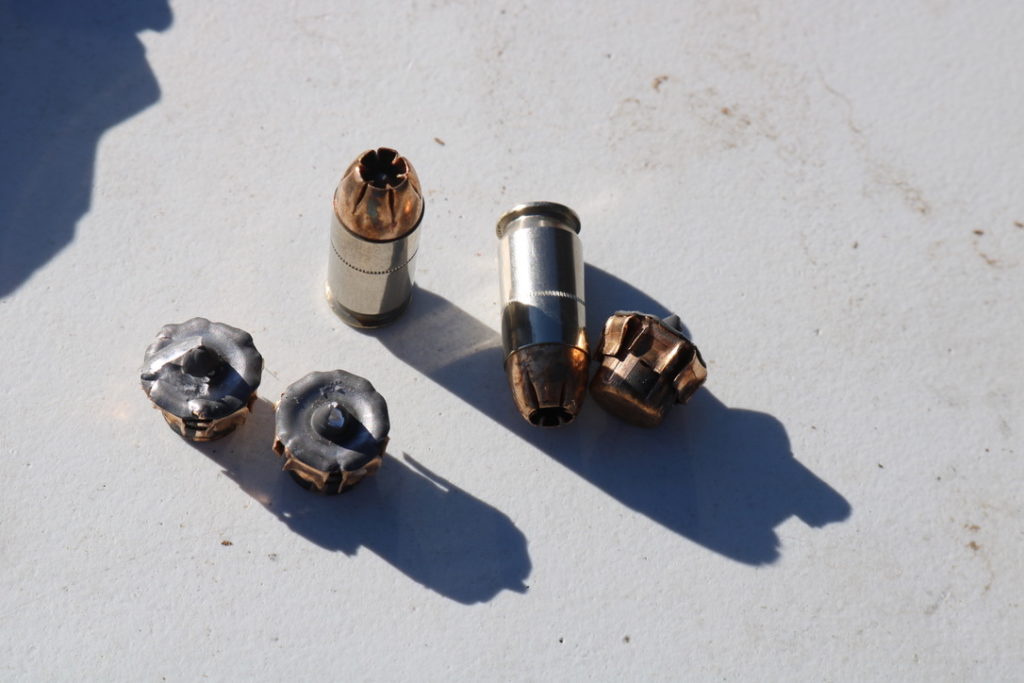 Do they work? Absolutely. Not only did they penetrate to 15.5 inches, very nearly exactly the Federal claim of 15, all three landed in the same spot. The consistency is on point, a reassuring fact in self-defense ammo. In our gel, they also opened every time like clockwork and retained full mass for all 15.5 inches. And the new center post design kept it’s integrity the entire way.

I am proud to see Federal retaining the Hydra-Shok name, but updating the bullet for the modern world. If it is time to cycle out your defensive carry magazines, the new Hydra-Shok Deep is one to take a look at.

Visit Federal to learn more about the Hydra Shok Deep