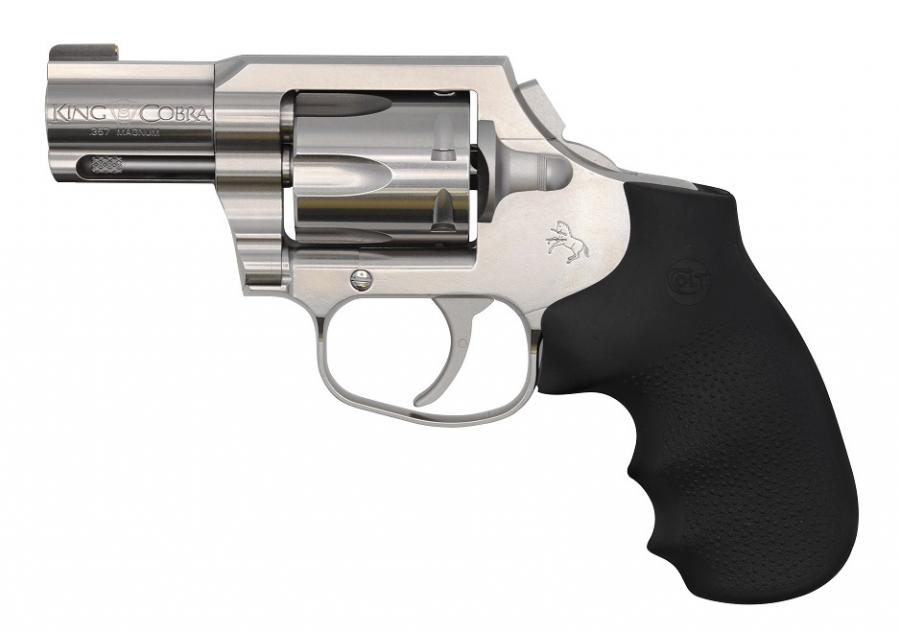 Colt’s Manufacturing is following up on their recently redesigned and relaunched King Cobra with the new Carry model. Capable at the range but built for every day carry the King Cobra Carry is a snubnosed 6-shot .357 Magnum revolver.

The King Cobra Carry is a double-action-only revolver with a bobbed hammer and a 2-inch barrel and full underlug. It has a full-size grip to help with recoil firing hot-loaded ammunition and accepts other grips for people who want a little more concealability.

Like all of the new-production Cobras, the King Cobra Carry has a user-interchangeable front sight held in place with a small set screw. The Carry model comes with a bead front sight and U-notch cut in the topstrap for rear sights. Other sights are offered separately including fiber optic and tritium night sights.

The updated Cobra design features a linear mainspring that provides an even trigger pull without stacking. This is especially important for double-action triggers since stacking can make shooting for accuracy more difficult. Colt wanted to make sure that their double-action triggers, in particular, stand out.

The King Cobra Carry has a brushed stainless finish that falls between their matte stainless on the standard Cobra and the high-polish finish on the Bright Cobra. It’s priced right in line with the 3-inch King Cobra with a suggested price of $899. The King Cobras are in fairly high demand and usually sell close to MSRP.

While some people may question the relevance of a compact revolver for self-defense and concealed-carry today, the King Cobra Carry does give you one more shot than other similarly-sized revolvers, and at 26 ounces, it’s heavy enough to shoot regularly and develop confidence with.

With the right grip revolvers can be easily concealed, especially for people who need to maintain a certain dress code. The Carry’s bobbed hammer will help reduce the chances of snagging on the draw.

Being chambered for .357 Magnum also gives shooters more flexibility with ammo selection. In addition to full-house magnums the Carry can fire every kind of .38 Special from paper-punching wadcutters to extremely over-pressure .38 made for self-defense.

And of course there is a fun factor with these guns. There is something about shooting compact magnums that appeals to a lot of gun owners and Colt fans are no exception.

Still, there are plenty of people who will be left waiting following this announcement. We, along with everyone else, have our fingers crossed that the next Cobra will have a nice, long barrel with sights to match. That seems like the obvious next step for Colt.