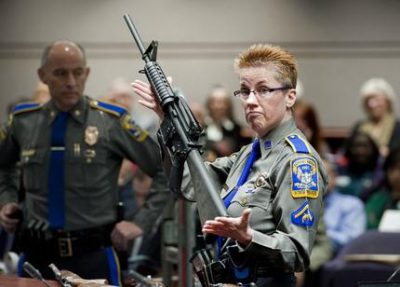 In what could be a major blow to the firearms industry in the United States, the Connecticut Supreme Court ruled today that parents of Sandy Hook massacre victims can move forward with a lawsuit against Bushmaster Firearms International, a subsidiary of Remington.

The court ruled in a 4-3 decision that while Remington cannot be held liable for simply selling its AR-style Bushmaster XM15-E2S rifle, the company’s advertising may have been unlawful under Connecticut’s Unfair Trade Practices Act.

The majority argued that a federal statute that protects firearms manufacturers from frivolous lawsuits includes an exception that allows for a suit to be brought under Connecticut’s trade law.

Referencing this statute [known as the Protection of Lawful Commerce in Arms Act (PLCAA)], the court stated, “Congress did not intend to immunize firearms suppliers who engage in truly unethical and irresponsible marketing practices promoting criminal conduct. It falls to a jury to decide whether the promotional schemes alleged in the present case rise to the level of illegal trade practices and whether fault for the tragedy can be laid at their feet.”

“This ruling strains logic, if not common sense,” said Second Amendment Foundation founder and Executive Vice President Alan M. Gottlieb. “The court dismissed the bulk of the lawsuit’s allegations, but appears to have grasped at this single straw by deciding that the advertising is somehow at fault for what Adam Lanza did that day in December more than six years ago.

“This is like suing Ford or General Motors because a car they sold was stolen and used to run over a pedestrian all because the car manufacturers advertised that their car had better acceleration and performance than other vehicles,” he added.

“The majority’s decision today is at odds with all other state and federal appellate courts that have interpreted the scope of the exception,” the National Shooting Sports Foundation (NSSF) said in a statement.

At trial, Sandy Hook families argued that Remington marketed the rifle in an “unethical, oppressive, immoral, and unscrupulous manner by extolling the militaristic and assaultive qualities of the rifle and reinforcing the image of the rifle as a combat weapon that is intended to be used for the purposes of waging war and killing human beings.”

They cited examples of advertisements for the rifle depicting soldiers and using language that described the firearm as “the ultimate combat weapons system.”

The Sandy Hook murderer, furthermore, was “especially susceptible to militaristic marketing” due to his aspirations of being in the military, according to the families’ lawyers.

“Remington may never have known Adam Lanza, but they had been courting him for years,” Mr. Koskoff, one of the lawyers representing the families, told the panel of judges during oral arguments in the case in 2017.

“Did the advertising even remotely suggest that the Bushmaster is best for murdering people?” he asked. “That’s a stretch of credulity worthy of surgical elastic.”

“There is no evidence the killer was driven by any advertising whatsoever,” he continued. “This is an affront to the First Amendment as well as the Second. Even hinting that the killer was motivated in some way by an advertising message is so far out in the weeds that it may take a map for the court to find its way back.”

Lawyers for Remington argued that the PLCAA’s exception should not apply to advertising campaigns like those promoting the company’s rifles. In addition, they argued that the weapons were marketed as tools for home defense and target practice, not for committing criminal acts.

James B. Vogts, a lawyer for Remington, said in court that the shooting “was a tragedy that cannot be forgotten.”

“But no matter how tragic,” he added, “no matter how much we wish those children and their teachers were not lost and those damages not suffered, the law needs to be applied dispassionately.”