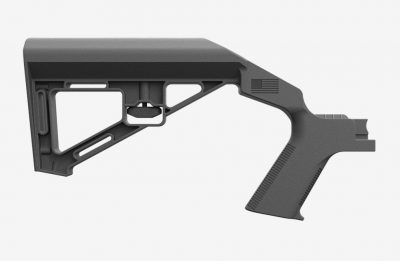 So far no court has granted a nationwide injunction on the new bump stock ban. Time is running out. (Photo: Slidefire)

The federal bump stock ban will go into effect tonight at midnight, and gun rights groups are running out of avenues to get enforcement suspended until the courts have a chance to review the case in detail.

At least four lawsuits were filed after the Bureau of Alcohol, Tobacco, and Firearms (ATF) decided to reverse their interpretation of the National Firearms Act (NFA) and classify bump stocks as machineguns. The suits asked that the courts to suspend enforcement of the new rule until the cases have been finalized.

GunsAmerica has learned that in two of those four cases, the courts ruled to grant injunctions to the plaintiffs in the suit but not to the hundreds of thousands of bump stock owners nationwide. In the D.C. Circuit Court and the 10th Circuit Court, the judges ruled to give the named plaintiffs a stay but denied the request for a nationwide injunction.

GunsAmerica spoke with one of the lawyers on the D.C. Circuit case, Stephen Stamboulieh, who explained that there’s still a chance the 6th Circuit Court will grant the nationwide injunction requested by Gun Owners of America, but time is running out.

“We’re hoping for a systemwide injunction, but there’s no guarantee we’re going to get that,” he said. “Bump stock owners have invested property rights in their stuff. Tonight at 11:59pm, are people going to get their doors kicked down? I hope not.”

Without an injunction, bump stock owners will have to decide whether they want to risk a federal felony conviction and keep their device or risk destroying their property needlessly if a court rules that ATF rule is unconstitutional.

Stamboulieh pointed out that the courts have treated this case differently from the get-go.

“If only we treated bump stocks like we treat all other types of cases about abortion and immigration,” he said. “[The courts will] jump over themselves to grant a nationwide stay. But it’s not like that. I don’t have good news.”

The court’s ruling came as a surprise to Stamboulieh, who thought the hearing on Friday was a slam-dunk for the pro-gun side.

“It went great for us. The DOJ had absolutely no clue what they’re doing,” he said. “The DOJ couldn’t answer questions by the judge. I don’t know how to explain how bad they did. There are no words for it. It went terrible for them.”

SEE ALSO: Only 2 Bump Stocks Turned Over To Vermont State Police Ahead of Deadline

But the court still denied Stamboulieh’s team a nationwide injunction. If they don’t get good news from the 6th Circuit, they can still ask the U.S. Supreme Court for an emergency stay. But the new rule goes into effect in less than 12 hours, which likely doesn’t give them enough time.

“We’re trying to go through the process,” Stamboulieh said. “But the government didn’t give us a lot of time, and they did it during a shutdown.”

If one of the circuit courts grants an injunction, they have the power to apply the stay nationwide. If they don’t, bump stock owners will be required to destroy their property per ATF guidelines.

Check back here for the latest throughout the day.

UPDATE (7:04 p.m. EST): The 6th Circuit has refused to grant the injunction.  Looks like the ban will take effect tonight…

UPDATE (3/26 9:35 a.m. EST): The D.C. Circuit Court clarified that all bona fide members of gun rights groups involved in the suit are also covered by the injunction. Those include the Firearms Policy Coalition, the Madison Society Foundation, Inc., and Florida Carry, Inc.

UPDATE (3/27/19 10:26 p.m. EST): The U.S. Supreme Court has declined to get involved in the case, according to the Associated Press. Chief Justice John Roberts declined the initial request, and a second request is pending in front of Justice Sonia Sotomayor. (We’re not holding our breath.)