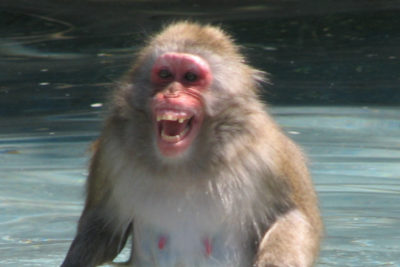 A crazed monkey escaped its enclosure last week in North Carolina and attacked a woman before being killed by a CCL holder. (Photo: Wikimedia Commons)

Crazy can happen anywhere, but one HVAC repairman in North Carolina was ready.

The Charlotte Observer reported last week that a pet Japanese macaque had escaped its enclosure and attacked a neighbor woman in the coastal town of Shallotte, NC.

The primate “just went bananas,” Shallotte Detective Sgt. John Holman told the Observer. The monkey bit and scratched the neighbor’s arms and legs as she stood talking to an HVAC repairman outside her home. After the monkey began to draw blood, he ran across the street to a different neighbor’s house and started beating on a glass door.

The HVAC repairman, who police have not named, approached the macaque, who turned and began moving towards the man. That’s when the CCL holder pulled out his Glock handgun and shot the monkey once, killing it.

Police say the man’s license is in order, and he won’t be charged with a crime.

“He was protecting the citizen and the neighborhood,” Holman told the Observer.

As for the owner of the monkey, police say he owns several other exotic pets, but he was properly licensed to own them. He did admit to police that the now-deceased macaque was particularly “aggressive.”

In that the primate wouldn’t be unique. Macaques frequently attack tourists in New Delhi, India, where they live in large numbers and interact with humans daily. If you find yourself facing down an angry macaque (and you’re less prepared than our HVAC repairman), experts say you should surrender your food, avoid eye contact, and not show your teeth.

While monkeys remain an unlikely adversary in the continental United States, pet dogs account for about 10,000 hospitalizations and 25 deaths each year. In 2015, for example, a woman was attacked by a neighbor’s pit bull while walking to her mailbox. The animal had escaped through a window and may have been riled by a storm rolling through the area.

The dog killed the 48-year-old woman and continued to attack neighbors until police arrived and shot the dog.

The woman who was attacked by the macaque last week went to the hospital but is expected to be OK, thanks in large part due to the quick action of the CCL holder.