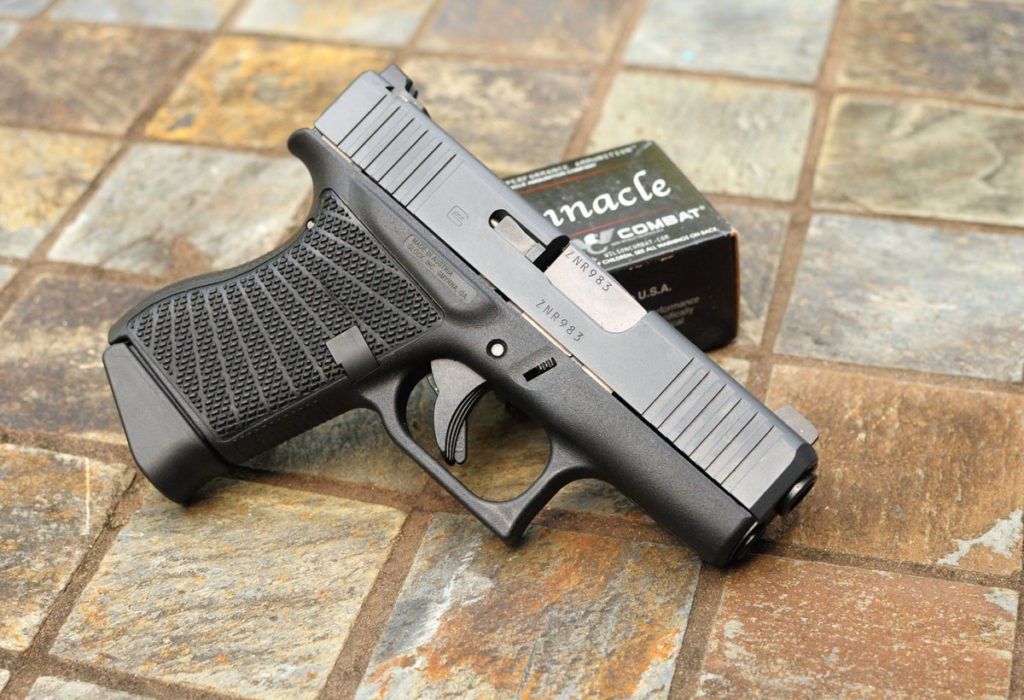 Wilson Combat has introduced a complete line of Glock modifications that can be ordered ala cart. The modifications are affordably priced and turnaround time is very reasonable.

In early 2018, Bill Wilson surprised the pistol market by announcing a line of modifications for Glock pistols. Bill actively resisted working on Glocks for some time but finally recognized that a large percentage of shooters, who owned one of his 1911 pistols, probably owned a Glock. There were also a lot of Glock shooters who were Wilson Combat fans and wanted their pistols enhanced.

As with all of Bill’s projects, he took on the Glock project full force! A lot of time went into what modifications were popular and would fit with the Wilson Combat philosophy. That philosophy is that the pistol is designed for personal defense of you and your family. The Wilson Combat Glocks would be tastefully functional and practical. The next priority was to make the packages affordable while ensuring that quality was up to Wilson’s standards. Part of the project entailed improving the level of automation.  This required an investment in building fixtures, writing code, and programming a laser. Only when everything was in place and met Bill’s approval, did Wilson open their shop for Glocks.

The final project resulted in an a la carte build sheet that gives customers some 88 options. Last year, I visited Bill at his ranch in Texas. He was kind enough to give me a guided tour of his vault. One of the things he showed me was a prototype of a Glock 19. I decided, then and there, that I would get a pistol to Berryville as soon as I could. I sent my back-up Gen4 Glock 19 to Wilson to do their magic. The pistol I got back was so impressive that it has become my daily carry pistol. Shortly after receiving my G19, Wilson expanded their offering to include the Glock 43. I just happened to have a bone stock 43 in the safe so I was immediately all in. 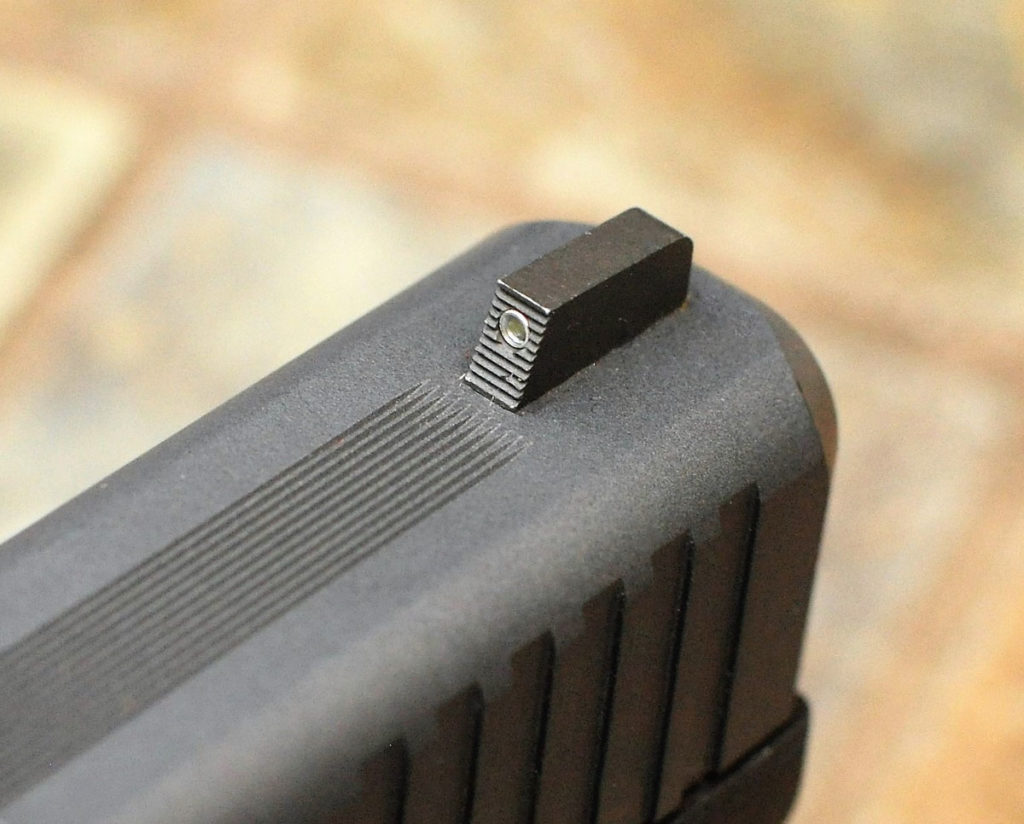 The author ordered a Wilson Vickers Elite serrated front sight with a Tritium insert for his G43. 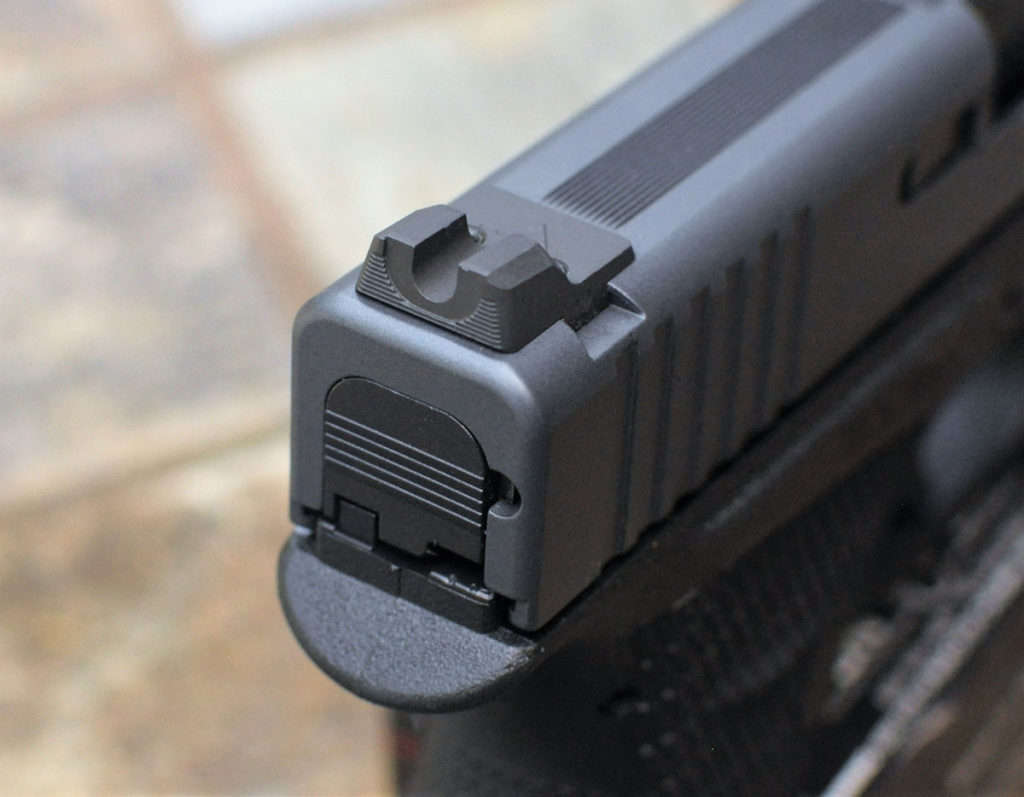 The stock rear sight was replaced with a “U” notch Wilson Vickers Elite rear sight.

I based my G43 build on my G19 build with a couple of exceptions. I wanted the G43 to reflect Wilson’s quality and appearance. My build sheet was not all inclusive but included the most popular, and affordable, options for a personal defense/carry pistol. I also added a few cosmetic options.

The slide received most of the attention. The shop machined six forward cocking serrations that replicate the factory rear cocking serrations in number and width. The serrations on the left side of the slide are cut around the “Glock” logo. The end of the slide was radiused in a manner similar to the new Gen5 Glocks.  This aids in re-holstering and also is advantageous when carrying appendix. The top of the slide was machined with 28 LPI serrations from the front sight, rearward to just in front of the rear sight. The factory sights were replaced with Wilson’s “U” notch rear Battlesight and a Tritium front sight. Finally, the slide was finished in gray Armor-Tuff to complement the black frame.

Wilson also carries the Vickers Tactical extended magazine release and the extended slide release for Glocks. These improve the operating controls on the little G43. 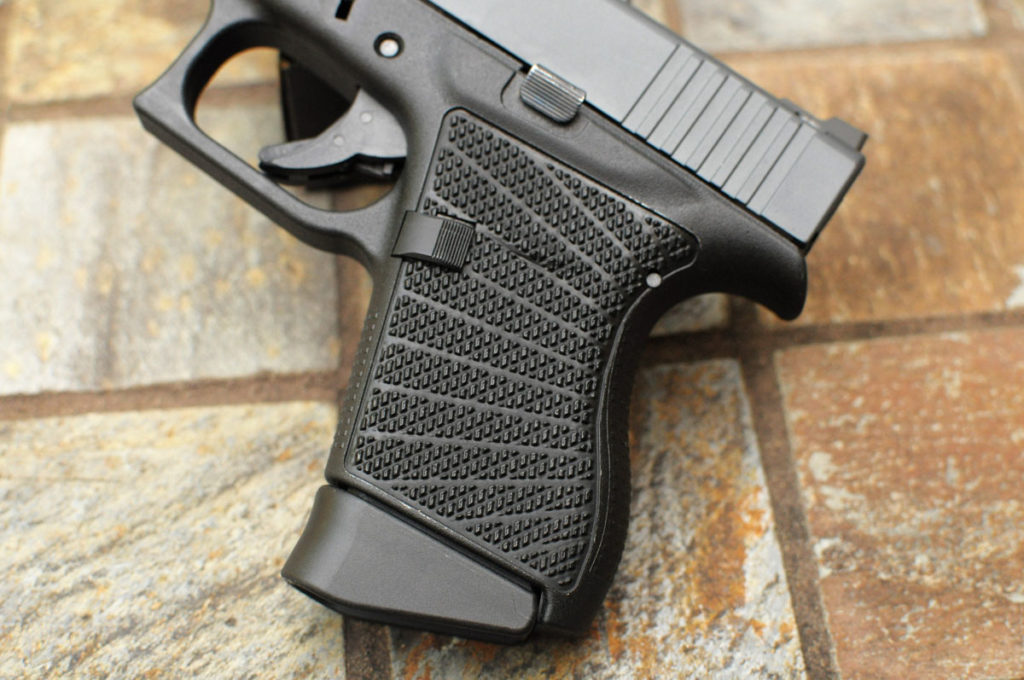 Wilson uses a computer-controlled laser to cut their Starburst pattern on the Glock grip. 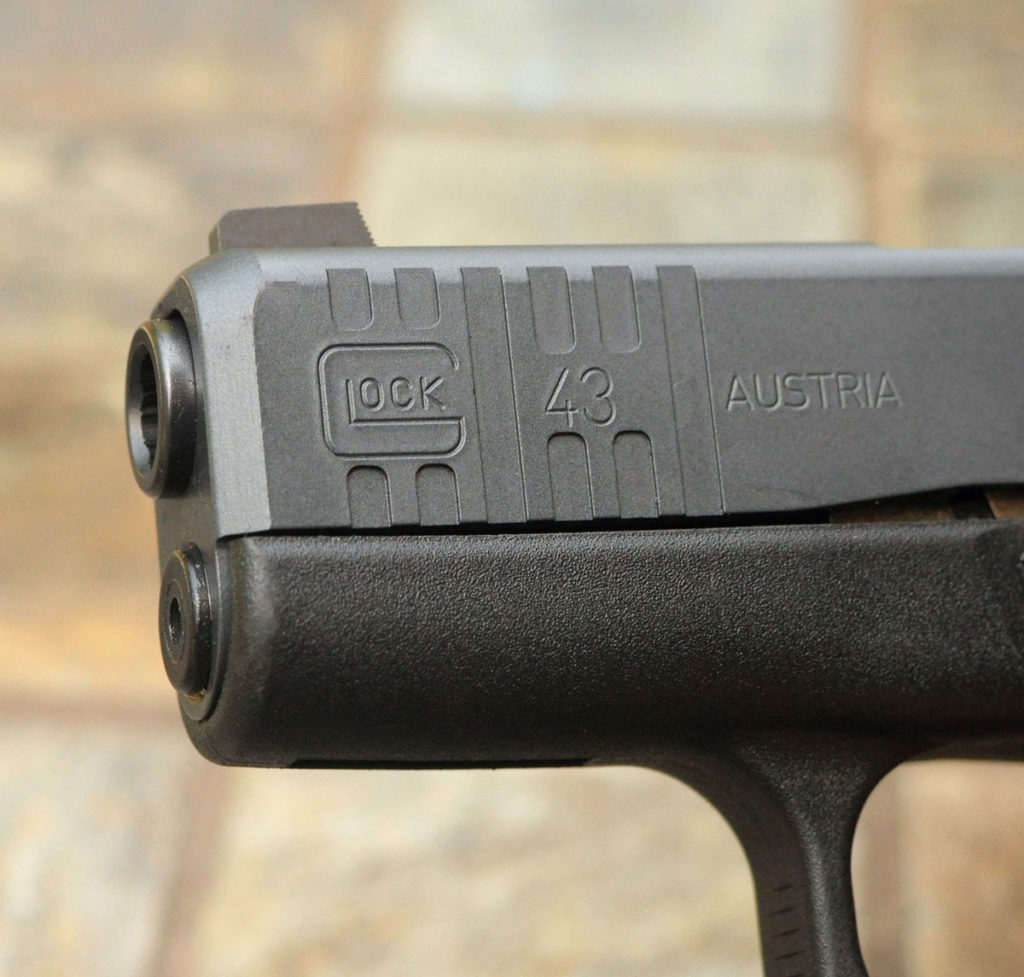 The front cocking serrations on the G43 are cleanly machined and match the factory rear serrations. They are a very functional addition to a compact pistol like the G43.

The frame received a laser cut stipple in Wilson’s Starburst pattern. The laser allows the pattern to be very clean and consistent. I had the base of the trigger guard high cut with a single relief for a higher purchase on the pistol.  I also added the Vickers’ extended magazine release and slide stop.  I kept the stock trigger that I had previously improved with the installation of a Ghost Edge Connection from Handgun Combatives.

With the addition of the Ghost connector, the trigger on my G43 breaks at 4 lbs., 10 oz. with the customary over-travel found in the 43.

Since my 43 is only an occasional carry piece, I passed on a few options, in order to keep the build within budget. I did not have the barrel crowned and the ejection port lowered.  And, as previously noted, I did not go with Apex trigger components.  As shown in the photos, the G43 is the perfect companion piece to my daily G19.

I admit that when I first shot my G43, I was unhappy with the combination of my performance and the performance of the pistol. I simply could not shoot it as well as I expected. So, I set about diagnosing the problem and then attempting to solve it. I determined that the small diameter of the frame, combined with a hard trigger break and significant over-travel, was resulting in my pulling shots. The Ghost Edge Connector helped, along with more range time.

For more formal testing, I selected to test the G43 with three of Wilson’s premium personal defense loads.  We started with the 95 gr. copper TAC-XP load that is optimized for compact pistols. Despite averaging 1,165 fps, this load was soft shooting and is ideal when over penetration is a concern. The next load was the copper, 115 gr. TAC-XP +P High-Performance Tactical load.  This is my favorite load and is normally in the G43.  The 115 gr. +P load averaged 995 fps. We also shot the 124 gr. XTP-HP +P load. This is a traditional, lead core, jacketed hollow point that averaged 1,095 fps. Federal’s HST loads are considered, by many, to be the king of the hill for traditional JHP bullets. We tested the 150 gr. HST Micro load in the G43. This load is designed specifically to give good terminal ballistics in small pistols. The HST Micro load averaged 862 and had a very mild recoil impulse. Finally, we ran around 200 rounds of Wilson’s remanufactured 135 gr. Hollow Base Flat Nose. This is a match load that averaged 873 fps and shot very well.

I previously mentioned that I have had difficulty shooting the G43 as well as I would like. As a result, I have carried it very little. I took this opportunity to increase my round count and work on my fundamentals.  The accompanying chart reflects the accuracy testing of the five different loads, at 15 yards. During the testing, my first groups ran around 3” with a number of flyers. As I settled down, I managed to shoot a few respectable groups to include a 1.25” group with both the Federal HST Micro load and the Wilson 135 gr. HBFN.

After the formal testing, I ran a modified Hackathorn 10-10-10 drill. The original 10-10-10 drill is shot from 10 yards with 10 shots being fired in 10 seconds. The target is an NRA bullseye target. Given the magazine capacity of the G43 and its small size, I shot the drill from 7 yards instead of the normal 10 yards. The challenge is to remember the fundamentals and not let the clock beat you. I fired two sequences of five rounds with a five-second par time to meet the 10 shots in 10 seconds criteria. My first run was 4.27 seconds with all hits in the 10-ring. My second run was 5.13 seconds and, even though I shot slower, I managed to drop one round into the 10-ring. My final score was a surprising 99/100. What I found was, I actually shot the G43 better when shooting at speed. I shot a Bill Drill from five yards with all six rounds in a 3” group. While my time was not blazing, I was pleased with the way the G43 tracked. 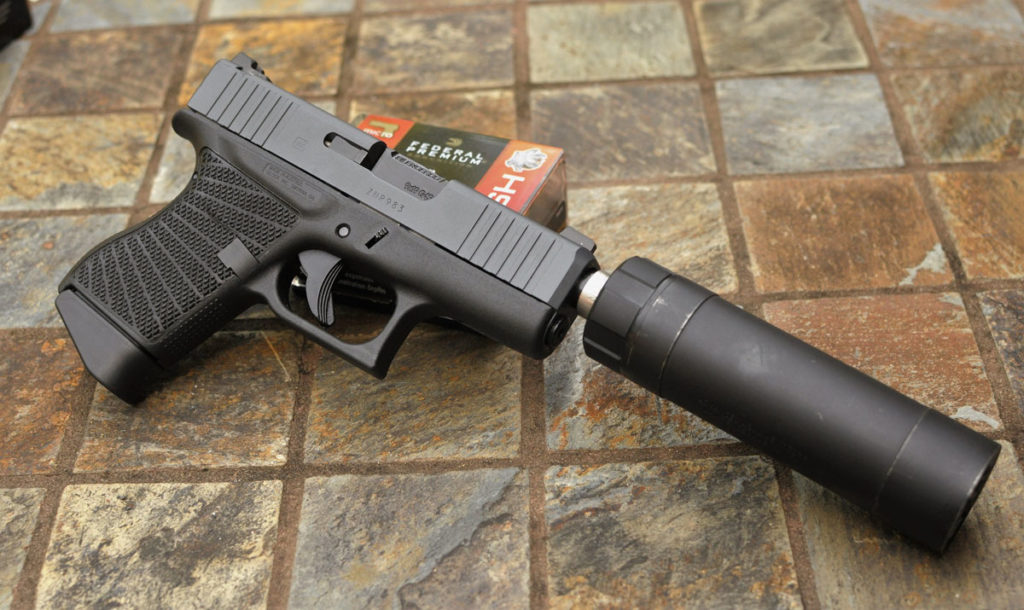 The author found the AAC TiRant 9S suppressor to be a great accessory to the G43. The pistol was 100% reliable with the suppressor installed.

I then swapped the factory barrel out for a Silencerco threaded barrel and installed my AAC TiRant 9S suppressor. For those not familiar with the TiRant 9S, it is a compact 9mm suppressor with an overall length of just 5.07” and is designed to be used with an ablative. Both the Wilson 135 gr. HBFN load and the Federal HST Micro load averaged 873 fps and 862 fps respectively. Both performed well with the TiRant 9S. While the Wilson Battlesights did not clear the suppressor, we were able to make solid hits by shooting with both eyes open and superimposing the sight on the target. 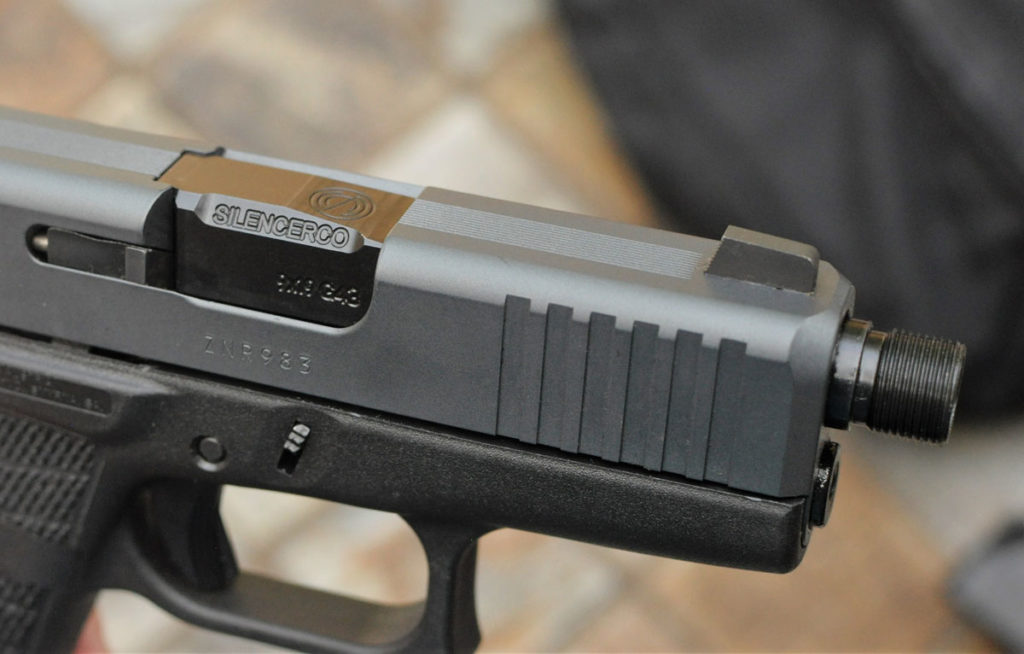 The author installed an extended/threaded barrel from Silencerco for use with the TiRant 9S suppressor. 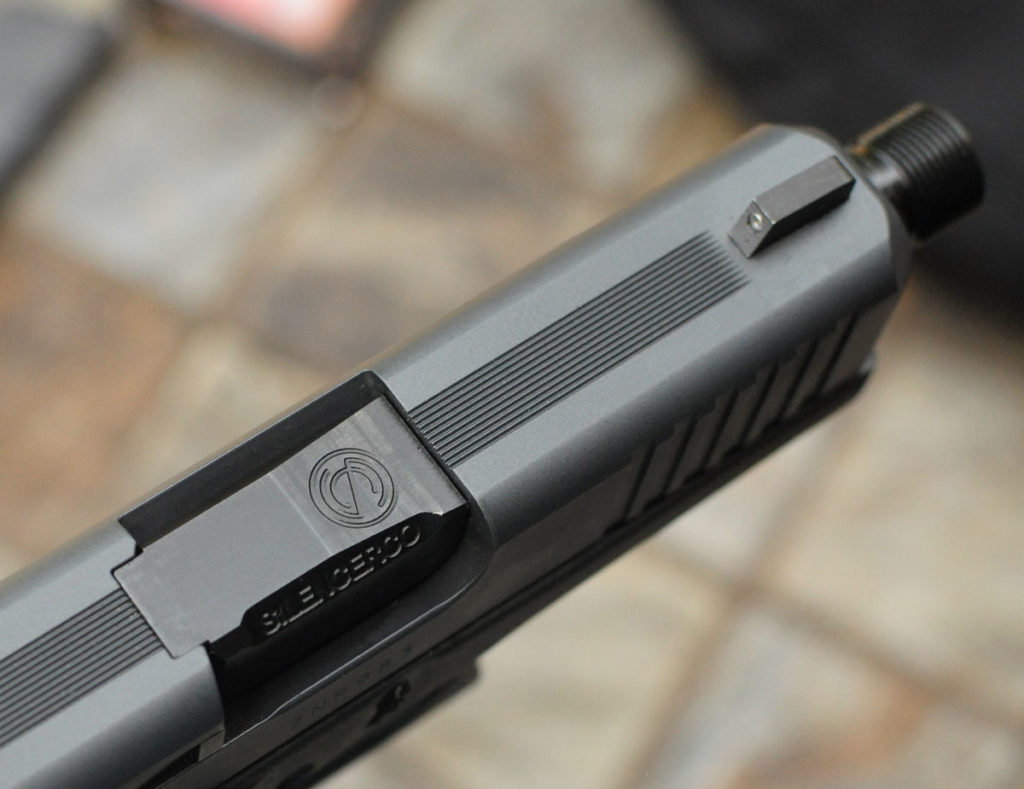 The serrations on the top of the slide are a nice addition and assist in reducing glare. 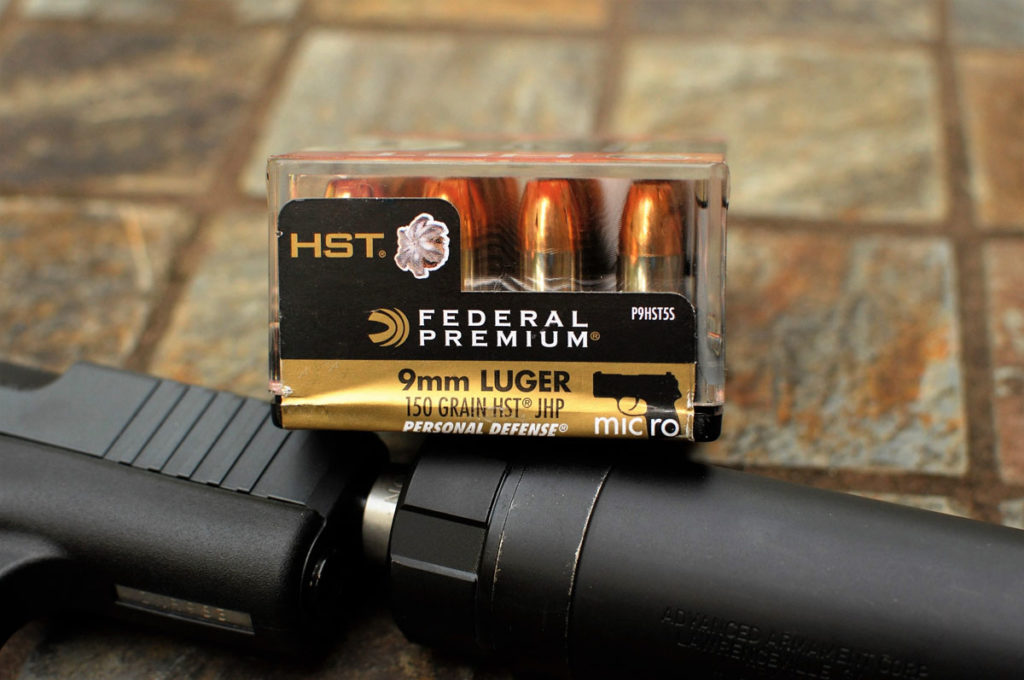 Federals 150 gr. HST Micro load was designed to provide effective terminal ballistics from a compact pistol. With an average muzzle velocity of 862 fps, it is also a very quiet round when used with a suppressor. 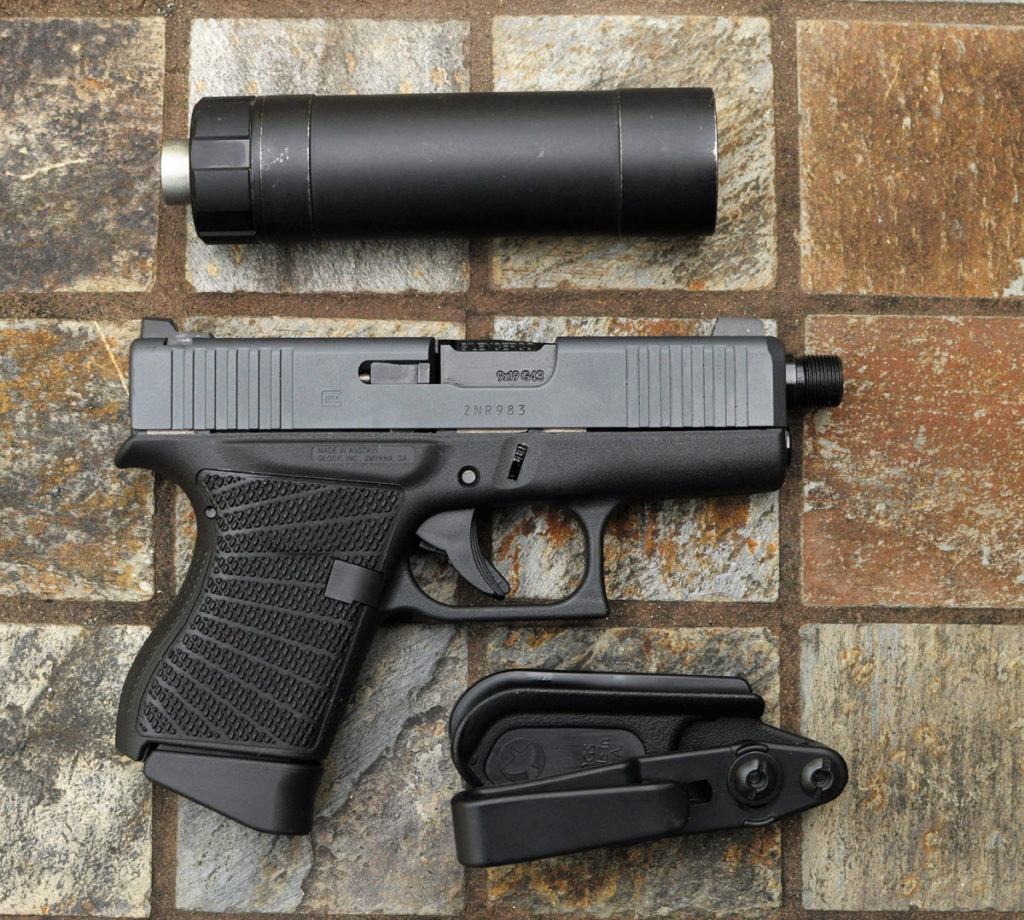 The Wilson Combat G43 is shown with the author’s AAC TiRant 9S suppressor and a Raven Vanguard 2 holster. The entire kit is compact and very efficient.

Because of the compact nature of the G43, I generally keep a Raven Vanguard 2 holster close by.  The Vanguard 2 clamps around the trigger and has an integral belt loop. It also serves as a safety by covering the trigger when the G43 is not being carried. For belt carry, I have an older Valkyrie OWB rig from Veil Solutions. For those who elect to carry the G43 in a pocket, Blue Force Gear has the new ULTRAcomp Pocket Holster. 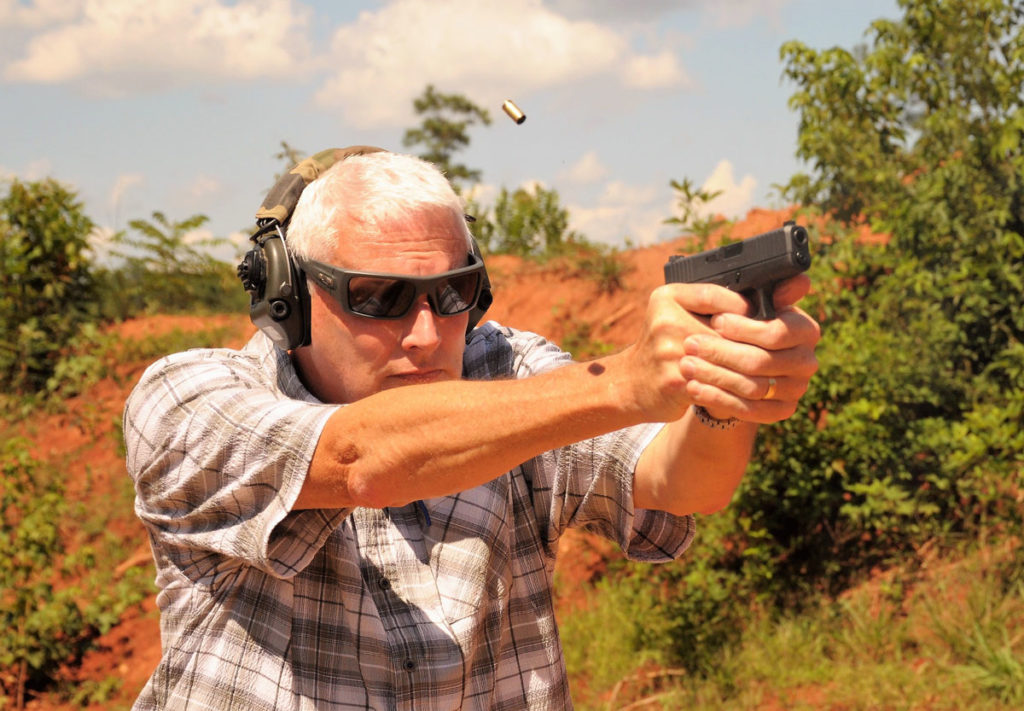 By the end of this evaluation, I felt more confident in my abilities with the little G43. I also came to several conclusions. The Starburst stippling works well without being overly aggressive for concealed carry. It also provided a very positive gripping surface for the fingers of the firing hand. I have also come to like the contour of the Wilson rear sight and the “U” notch. I have come to appreciate forward cocking serrations and I now find myself wanting them on my other carry Glocks. They are especially helpful on the abbreviated G43. Finally, the gray slide over the black frame is very attractive. 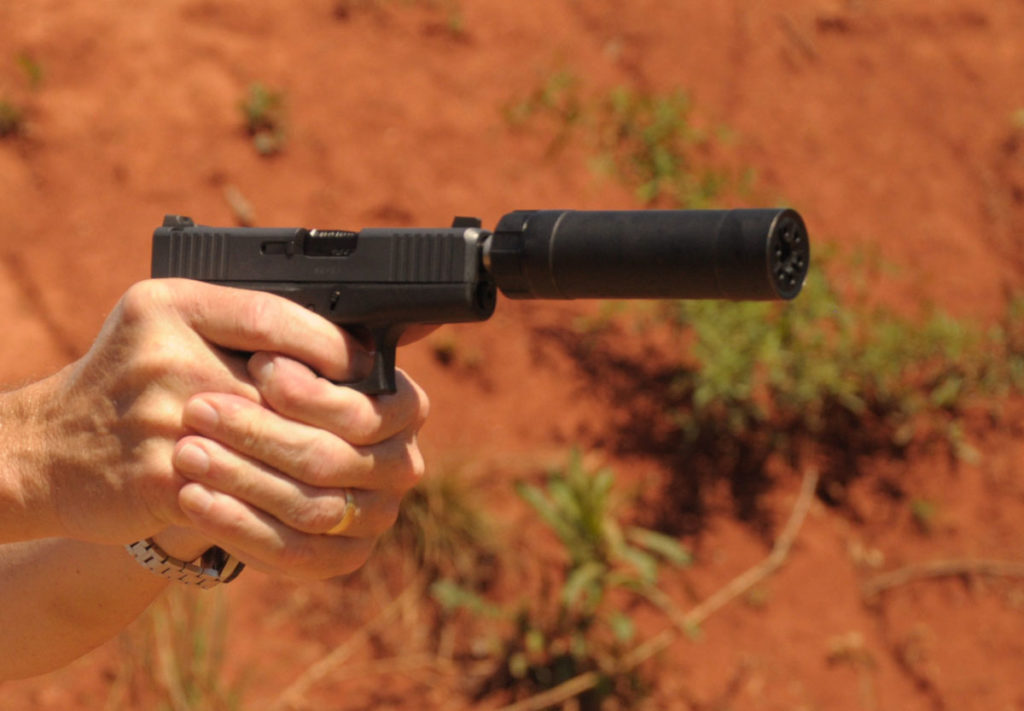 The TiRant 9S compact suppressor is an ideal suppressor for the G43. The G43 was 100% reliable with, and without, the suppressor.

Wilson’s Glock modifications are extremely reasonable. For example, the Starburst frame treatment is $139.00 while the cocking serrations and slide serrations are only $75.00 each. The gray Armor-Tuff finish for the slide is $100.00, but, for those who would like to have the entire pistol refinished, the cost is $350.00. This is considerably less than some other shops. 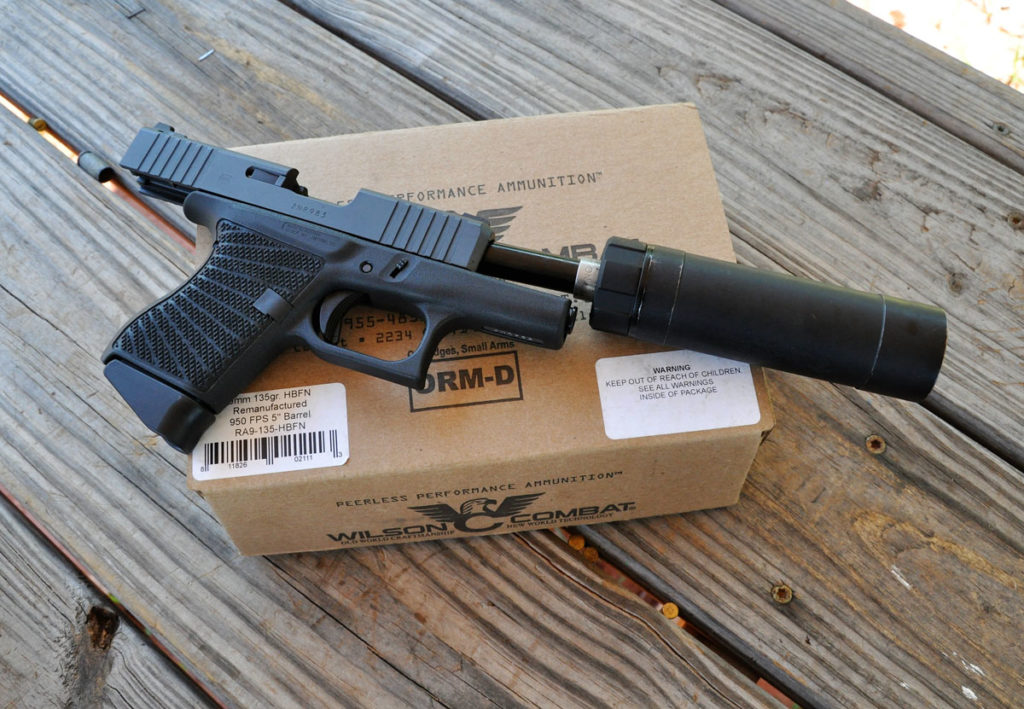 No one has ever accused Bill Wilson of half-stepping anything, and he certainly has a winner with his Glock packages, even if he doesn’t personally like the gun! For those who are interested in having a Wilson Combat Custom Glock, please visit their page on Glock Customization. When you click on the price list, a PDF build sheet will load showing all the options that are available. You will be glad you did! 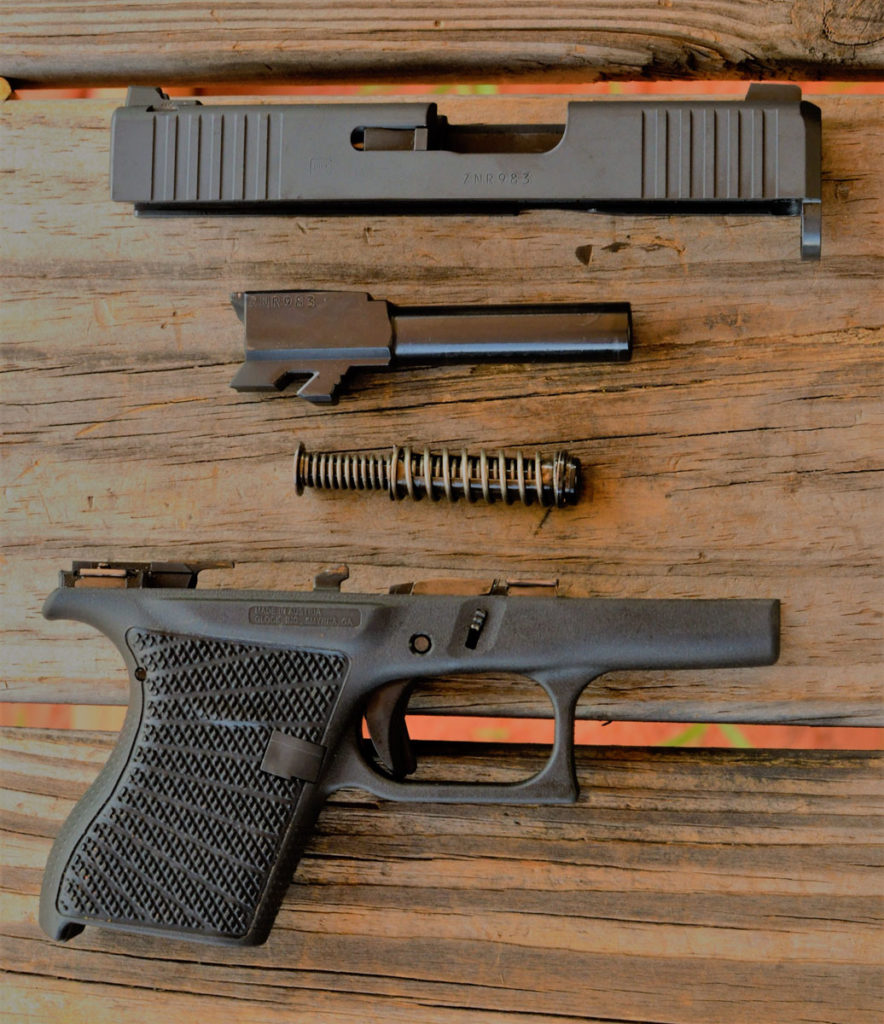 The Glock 43 breaks down for cleaning in the same components as all other Glocks. 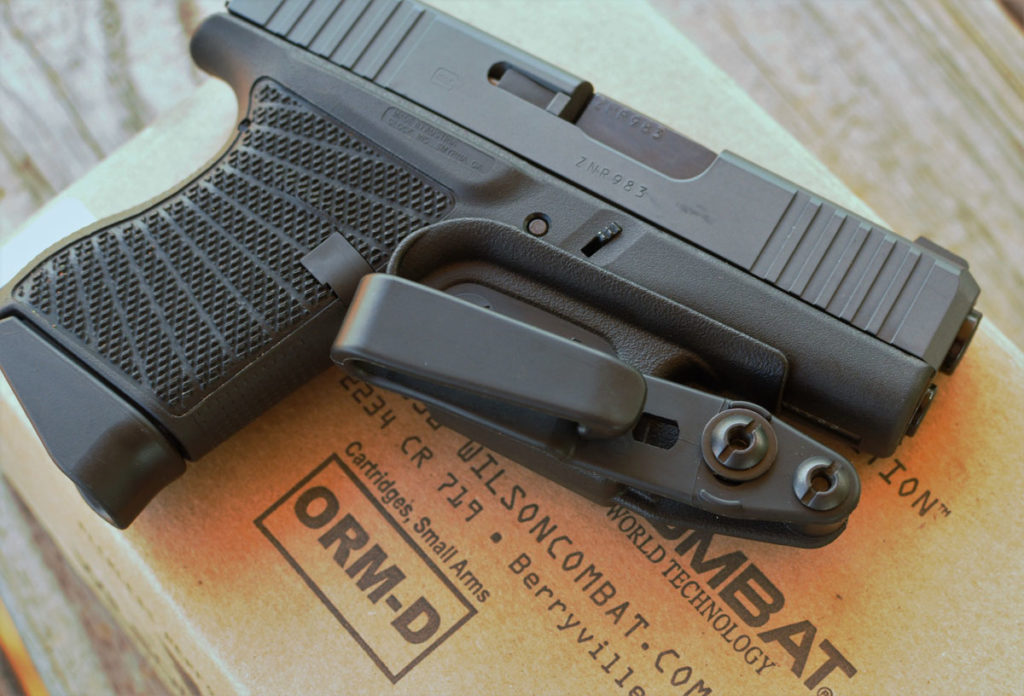 The Raven Vanguard 2 is the ideal holster for the G43 and can be used for Appendix or traditional IWB carry. 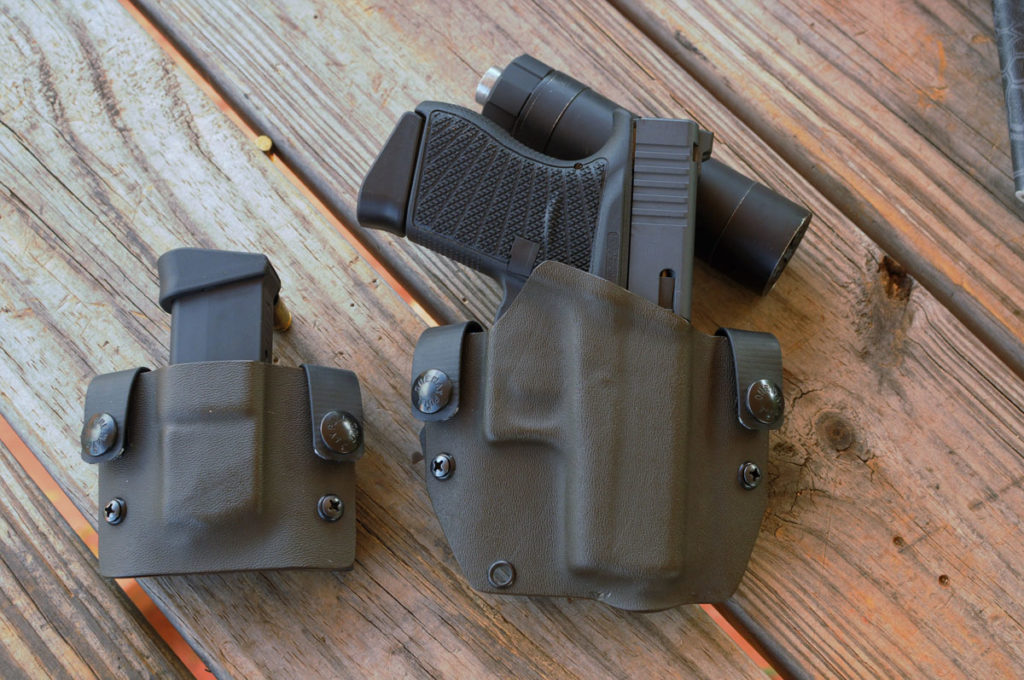 The author also tested an older kydex rig by Veil Solutions. It worked very well. Notice the holster has been modified to carry the G43 with an extended/threaded barrel. 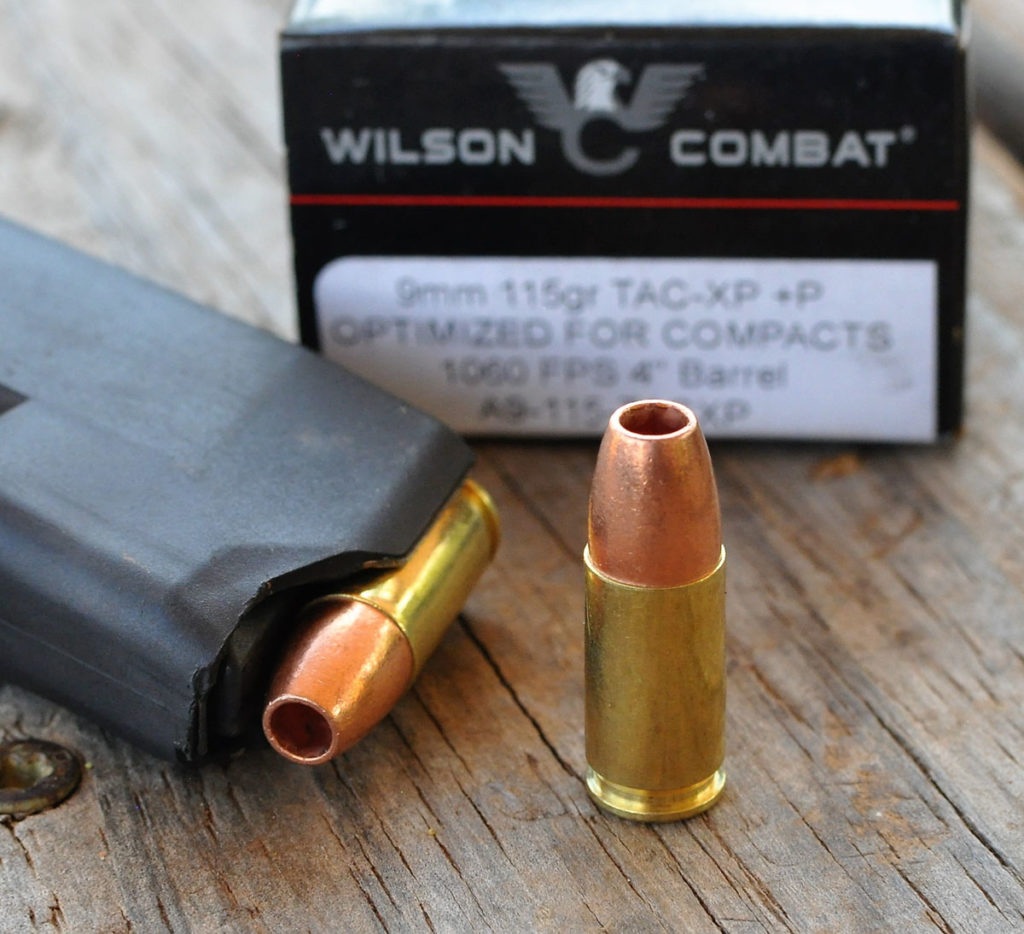 The author’s favorite load for the G43 is the Wilson Combat 115 gr. TAC-XP +P load. This load shot well in the G43 and the solid copper projectile provides excellent terminal ballistics. 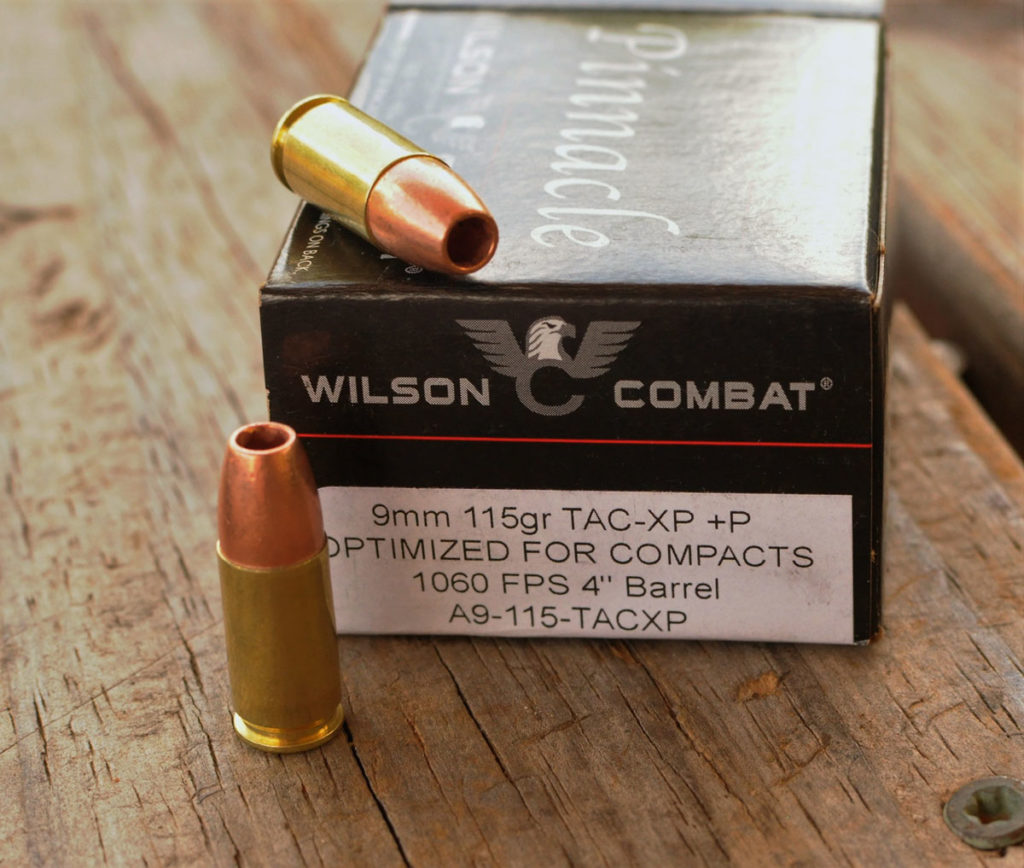 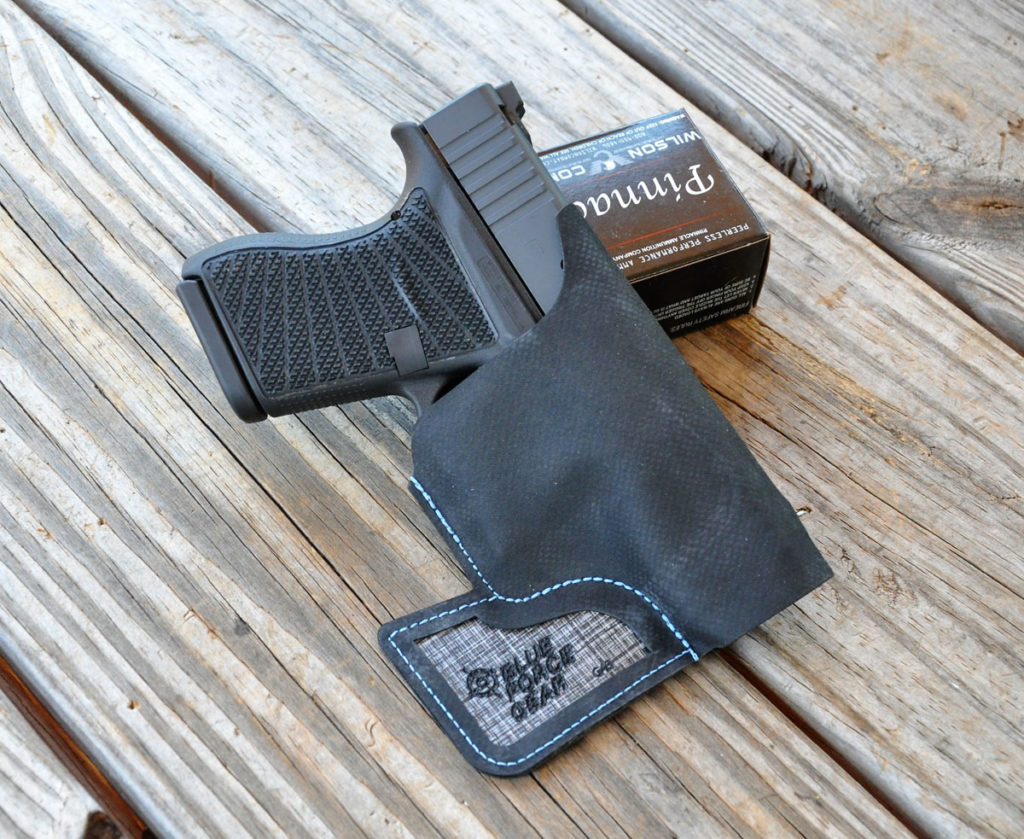 Blue Force Gear has recently launched a line of pocket holster for popular compact pistols. The ULTRAcomp holster is made from a polymer-based laminate that resists abrasion and water. 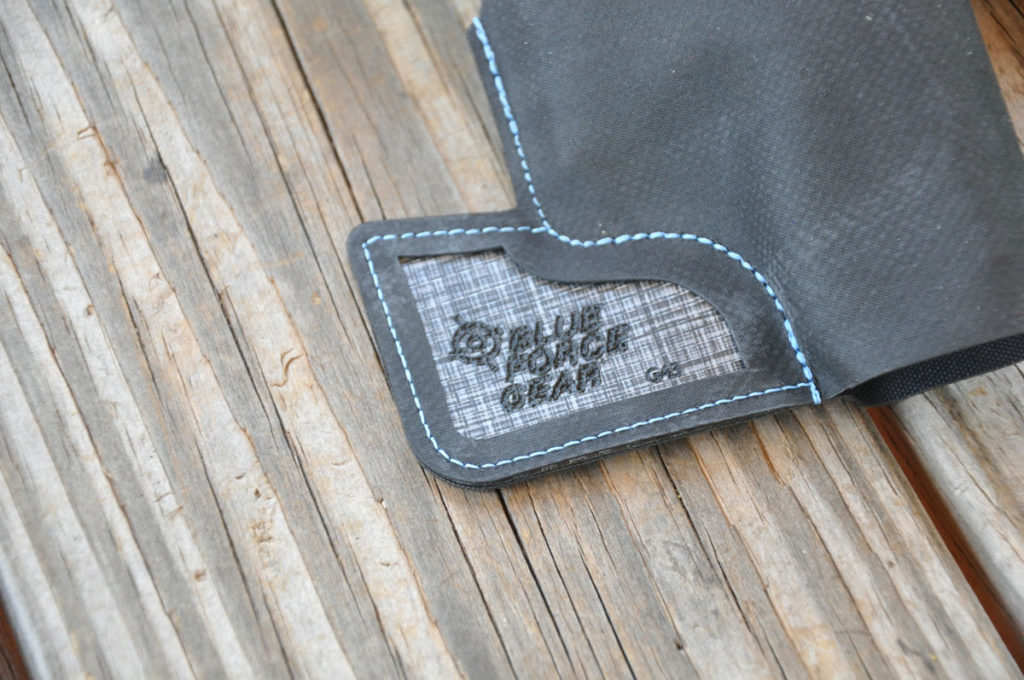