Introduced in 1975, the CZ 75 pistol was designed and manufactured by the Czech Republic’s Ceska zbrojovka a.s. Uhersky Brod or CZ. The CZ 75 and its many variations are still made by CZ today. But the basic design has been copied and tinkered with since the 1980s, and an estimated 1 million pistols are descendants of the CZ 75.

Among the newer versions of this workhorse pistol is the Defiant STOCK I, made in Italy by Tanfoglio and imported to the USA by the Italian Firearms Group (IFG) of Amarillo, Texas, under the brand name FT-Italia. Tanfoglio/FT-Italia set up this pistol model specifically for Practical Shooting Production Division as well as IDPA SSP and ESP Classes.

Accurate and very comfortable in the hand, the Defiant STOCK 1 clearly has many uses beyond competition, including home defense, hunting, law enforcement use, open carry, and just plinking. It strikes me as a little large for concealed carry, but there are people who no doubt would find this full-sized handgun just right for that purpose, too. 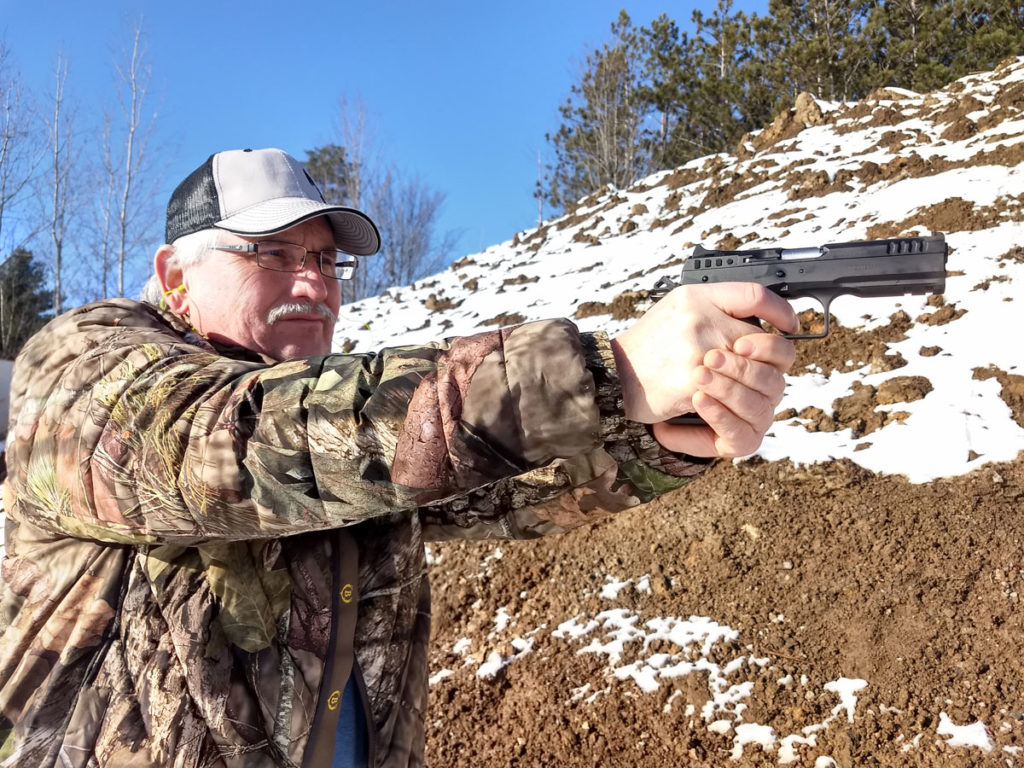 I received a new Defiant STOCK I chambered in .45 AUTO, and it was a pleasure to use.  Very accurate and extremely comfortable in the hand, I had zero malfunctions with the pistol through three hundred rounds and various brands of ammunition. In fact, I like the Defiant so much, I’d like to keep it. But if I bought all the first-rate firearms I reviewed, I’d soon be asking a judge for bankruptcy relief.

Mechanically, one thing that sets apart the CZ 75 design from other semi-automatic pistols is the internal slide rails. That is, the slide rides on cuts inside the frame unlike most semi-autos—including 1911’s—where the pistol’s slide rides outside of the frame. 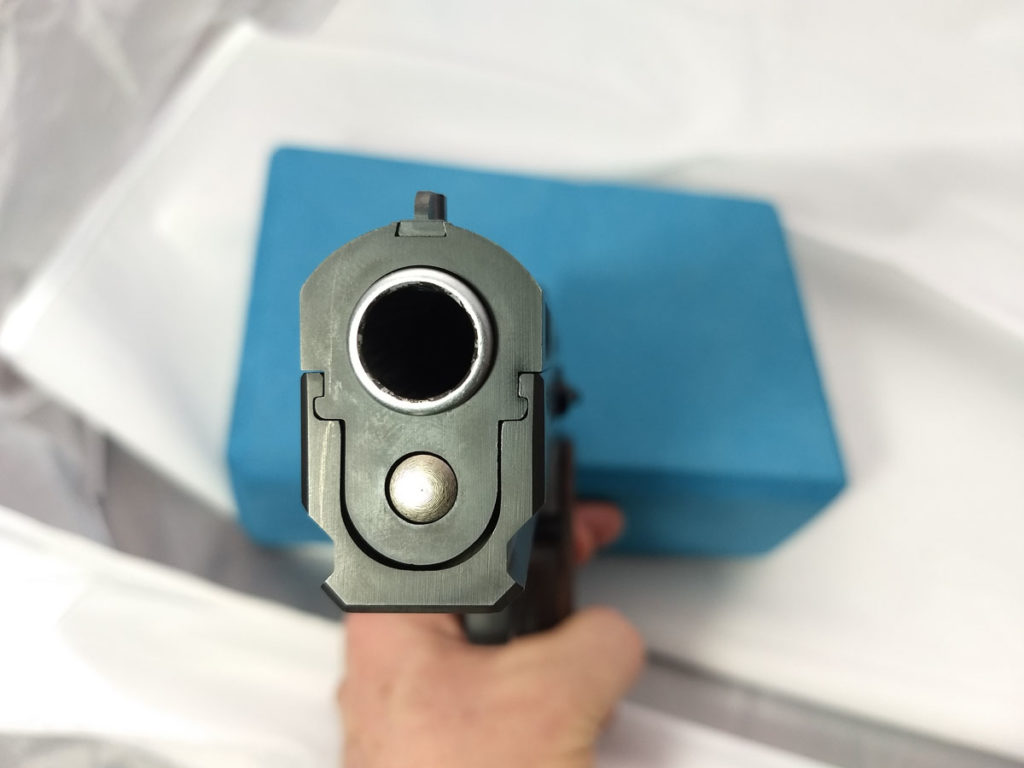 The Defiant can also operate in single- and double-action. The pistol can be carried cocked-and-locked in a single action, like a 1911, or with a round in the chamber and the hammer down, ready to go in double action.

At 25 yards and shooting from a rest, the two range/practice ammunitions placed five-shots at about 2.5-to 2.75-inches. At this distance, I really don’t expect greater accuracy from range ammo. 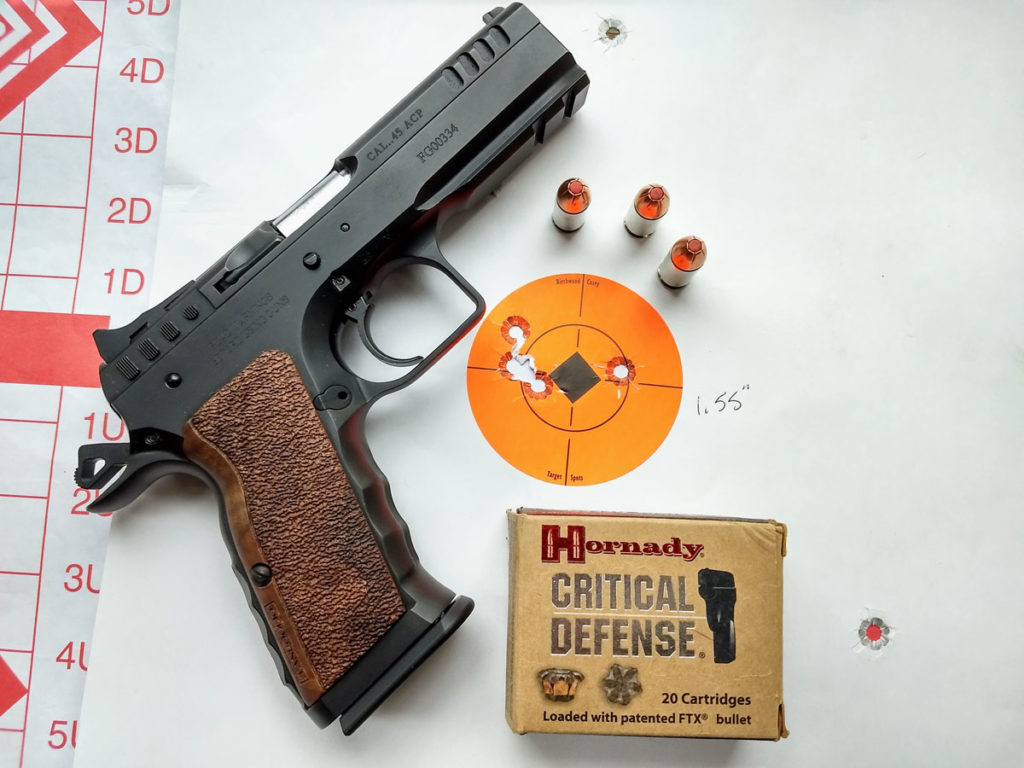 Hornady’s Critical Defense scored the best five-shot group at 25 yards, from a rest, with an impressive 1.55-inches.

Tim Crawford is a U.S Army-trained gunsmith with over 30 years of experience. He has worked on several CZ 75’s, including the original pistols.

Asked about the CZ 75-style slide system, which rides insides the pistol’s frame, Crawford said, “The original CZ 75 system required more moving parts to operate than standard semi-autos that have the slides running outside the frame. The CZ design used a roller bearing system, which required constant lubrication, more so than a 1911, for example.”

The Defiant design doesn’t use roller bearings. Tanfoglio simply cut grooves inside the frame on which the slide’s guide rails run. While this system doesn’t require the constant lubrication the original roller bearings did, it still looks like a great idea to keep the grooves well lubed.

Crawford added, “The CZ slide and frame assembly is much tighter [than most semi-automatics] and keeps a lot of the dirt and debris out of the interior that can happen with field use.”

This is a very solid pistol. “They’re built like a Soviet tank!” said Crawford. That tank-like construction comes with some weight, though. At 42-ounces unloaded, the Defiant weights approximately three to four ounces more than most full-sized 1911’s.

As you would expect from a pistol made with competition in mind, the sights on the Defiant STOCK 1 are good-sized and easy to pick up. The rear sight is adjustable, though it requires you to loosen the whole sight via two Allen screws and then tap over the sight itself. The rear notch is generously sized, making the front post easy to locate and center. 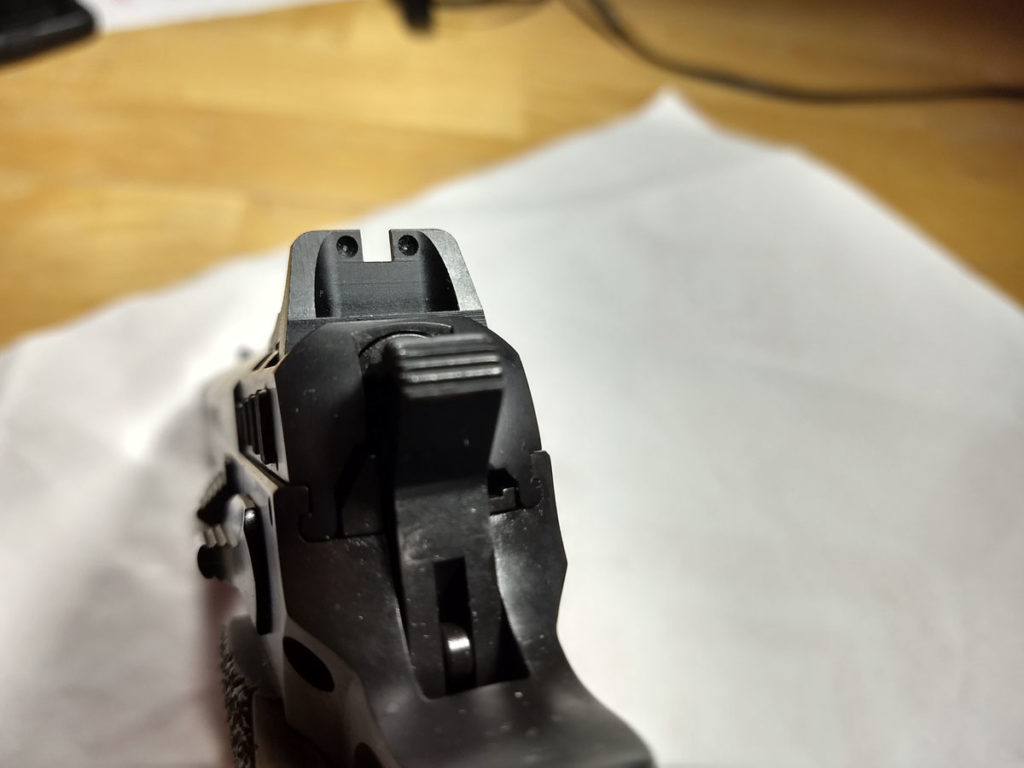 The rear sight of the Defiant is adjustable and features a generous notch for getting on target fast and centering the front post easily.

The Defiant STOCK 1 has a manual safety located on the left, rear of the slide. It is very easy to reach and manipulate with your right thumb, and a red dot shows when the safety is in the “FIRE” position. Other versions of the CZ 75 have a decocker, instead. For the U.S. market, the manual safety is likely the better choice given that so many pistols made and sold here have flip-up manual safeties. 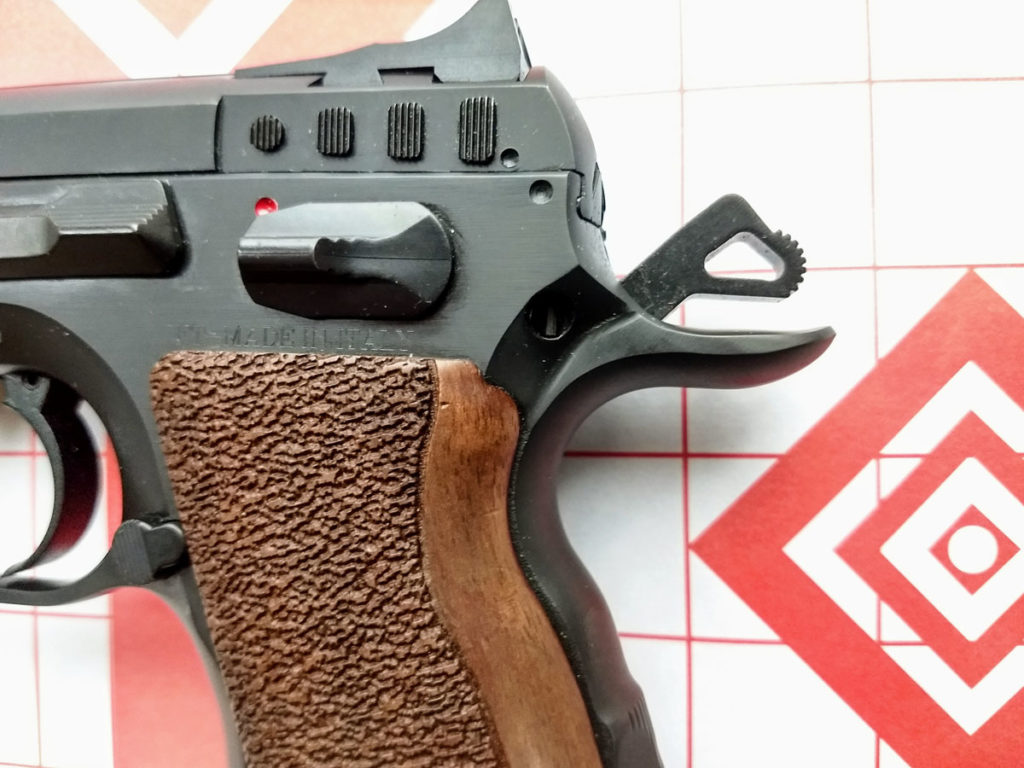 The manual safety shows red when the pistol is in the “FIRE” condition.

As mentioned, the Defiant can be carried with a round in the chamber, the hammer back and safety on. In a self-defense situation, a Defiant with the hammer back would require the shooter to snap off the safety before firing. This maneuver could easily be forgotten in a high-stress situation and carrying the pistol with the hammer down and double-action ready would be the more reliable option.

According to my Lyman Digital Trigger Pull Gauge, the Defiant’s trigger pull in single action averages just 2.5 pounds. The trigger in single action, however, has about .25-inches of take-up before engaging.

The double action pull is much longer and heavier—as you’d expect! I measured the pull weight at an average of 7.38-pounds. In the double action mode, the take up is approximately half of what it is in a single action.

The Defiant features stippled walnut side panels that provided a nice grip, an extended beavertail, and a checkered frame and back strap. A rail under the barrel allows a shooter to attach a light or laser. 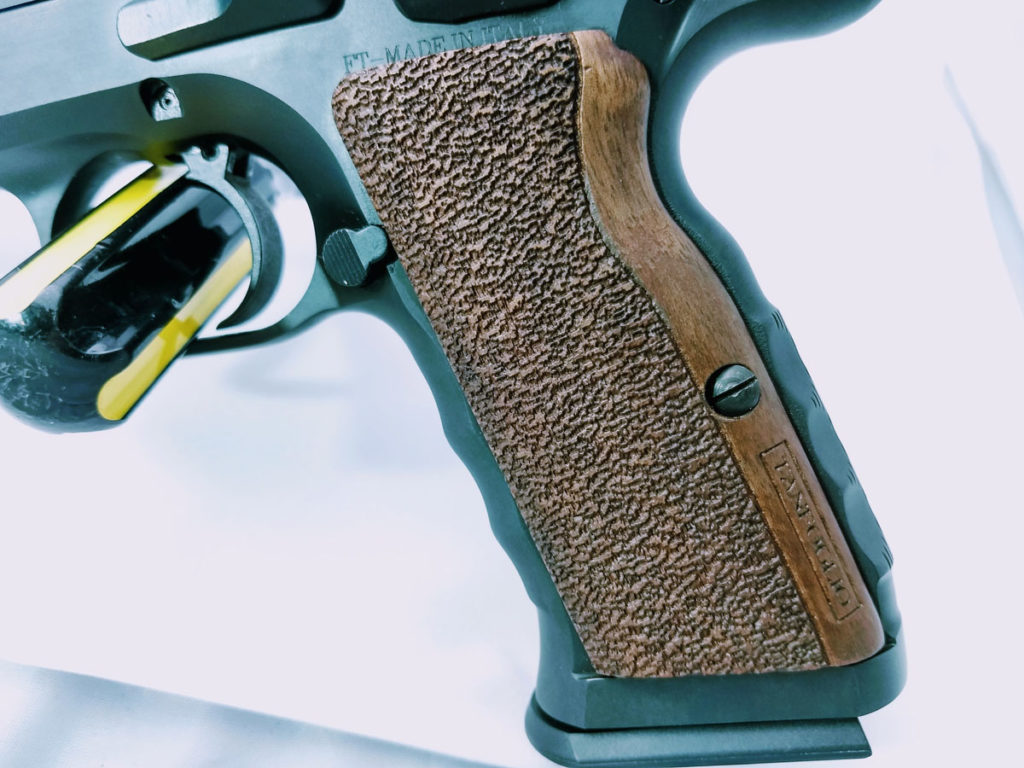 The walnut grip panels are stippled for a firm grip. 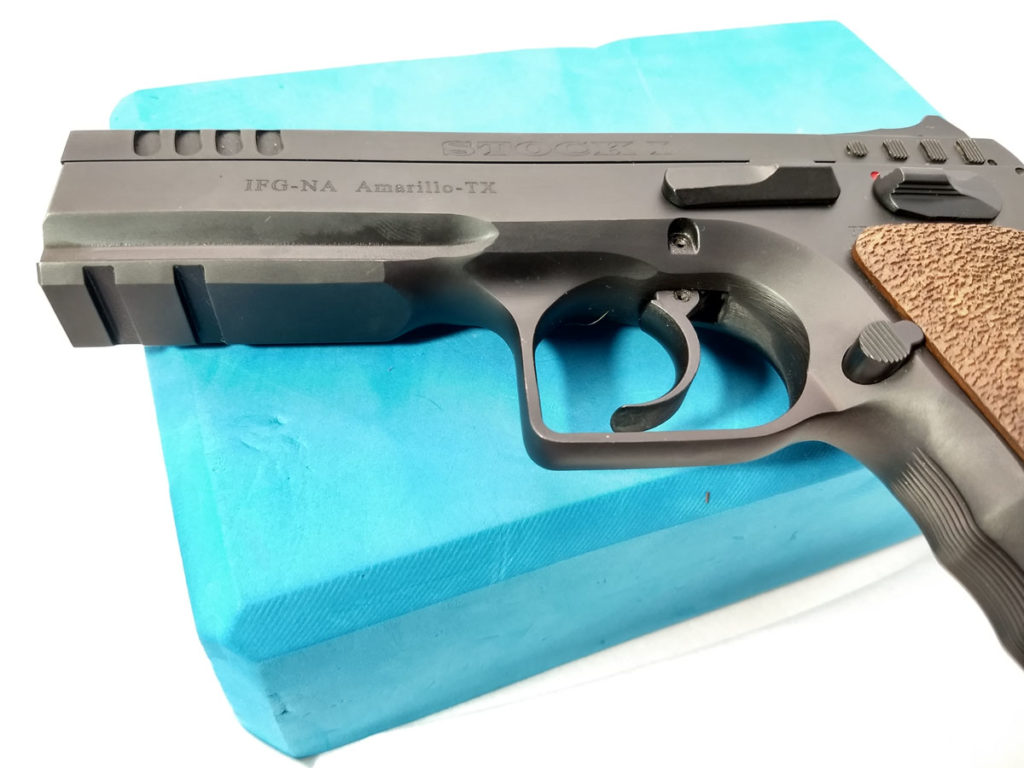 Disassembly of the pistol is easily accomplished. First, cock back the hammer all the way. Next, line up the two take-down marks on the left side of the slide and frame.  Now, push against the end of the slide stop that sticks out of the right side of the frame and removes slide stop. Move the slide assembly forward and off the receiver, remove the recoil spring and guide, and drop out the barrel. You are ready to clean the pistol. 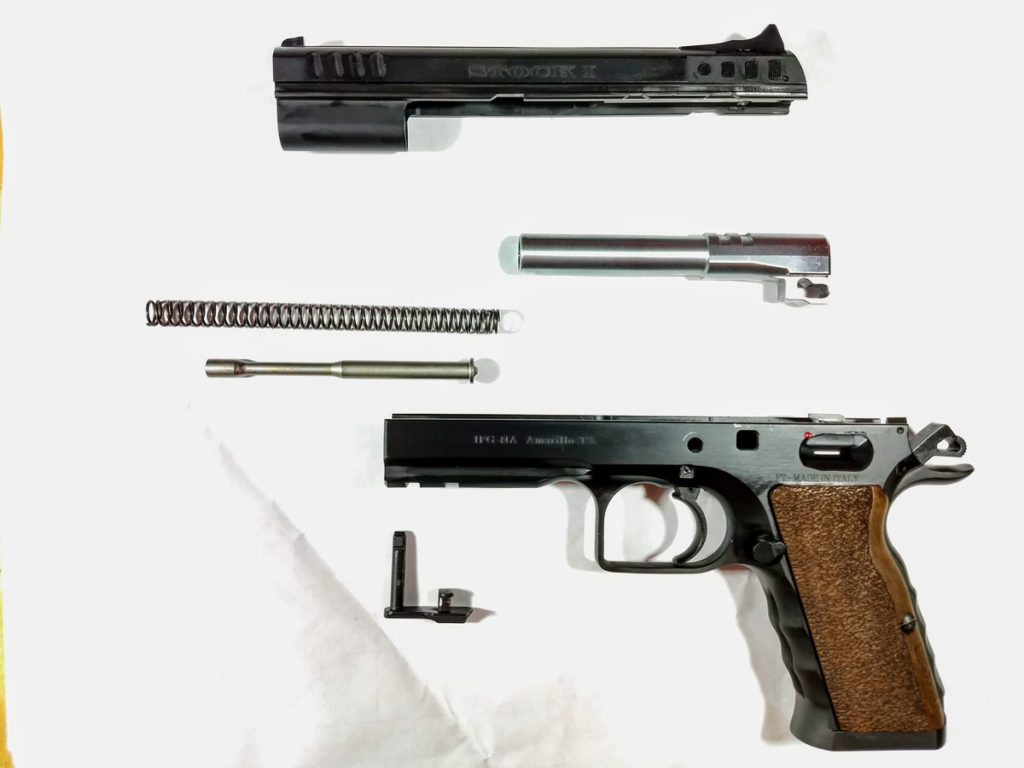 Field stripping of the Defiant is fast and easy.

The Defiant STOCK 1 is a first-rate pistol. It’s not inexpensive, but it is solid, reliable, and extremely accurate. I’d bet that any Defiant purchased now and cared for properly will be around for many generations to come. 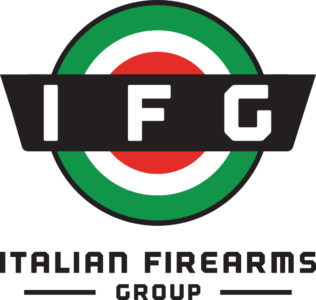 ***Shop GunsAmerica for your next pistol***

Next post: Che Guevara and the M2 Carbine: The Gory Death of a Paradox