Getting a new reloading press is a pretty exciting thing! And there is so much to do – from finding the right work area and getting the machine assembled, to deciding what caliber(s) you want to start making. If you are new to handloading then there is also the overwhelming nature of the complexity of the task and the volumes of information to sift through. We’ve all been there! But even for a seasoned veteran whose loads might be legendary at the local gun club, there can be intimidation anew when changing equipment – or simply adding a new caliber to the lineup. 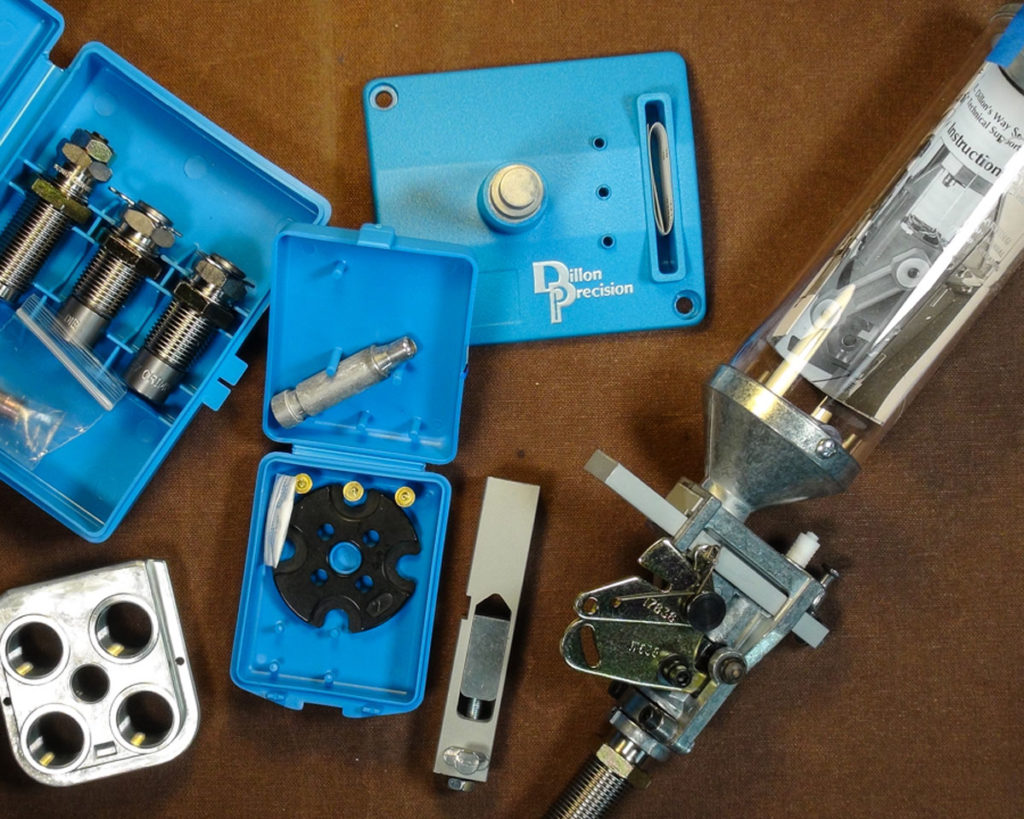 All of this new gear can be intimidating to the unfamiliar. Don’t worry – it’s not so bad – let’s walk through it.

Dillion Precision has made things about as simple as possible with their quick-change tool head systems and the “set it once and forget it” potential. But that also has a downside if you go a year or so without doing any setup… you simply can forget the steps. And if you’re like me, visual instructions and tips are far easier to follow than even the best-written instructions. This time of year, a lot of folks get either a full Dillon 550 press system or a new Caliber Conversion Kit and set of dies as gifts. And it can be a real buzzkill when you lay out all the parts and realize you need some help getting started. That’s where this article – and mostly the companion video comes in. Take a half hour with a fresh cup of your favorite holiday cheer or hot coffee and watch the video. For those who like words and pictures, there are some of those below too for reference – but trust me – the video is far more detailed. 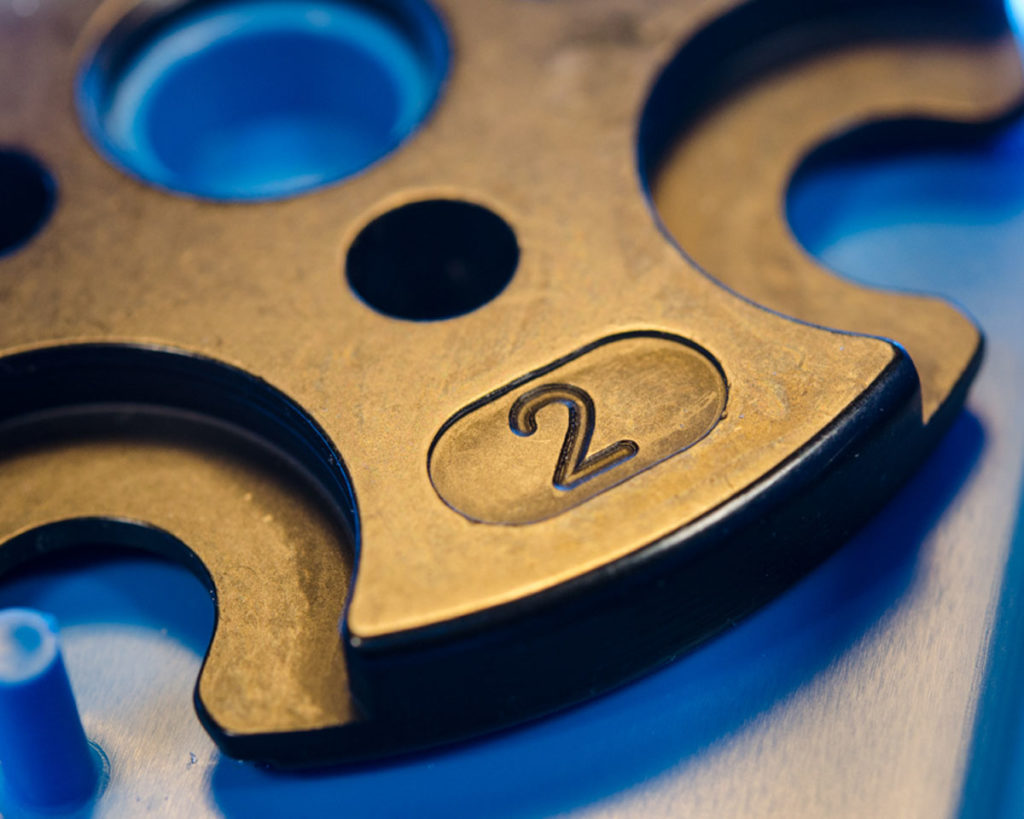 Installing the new shell plate is the first step. Did I mention how handy the Dillon toolkit is? 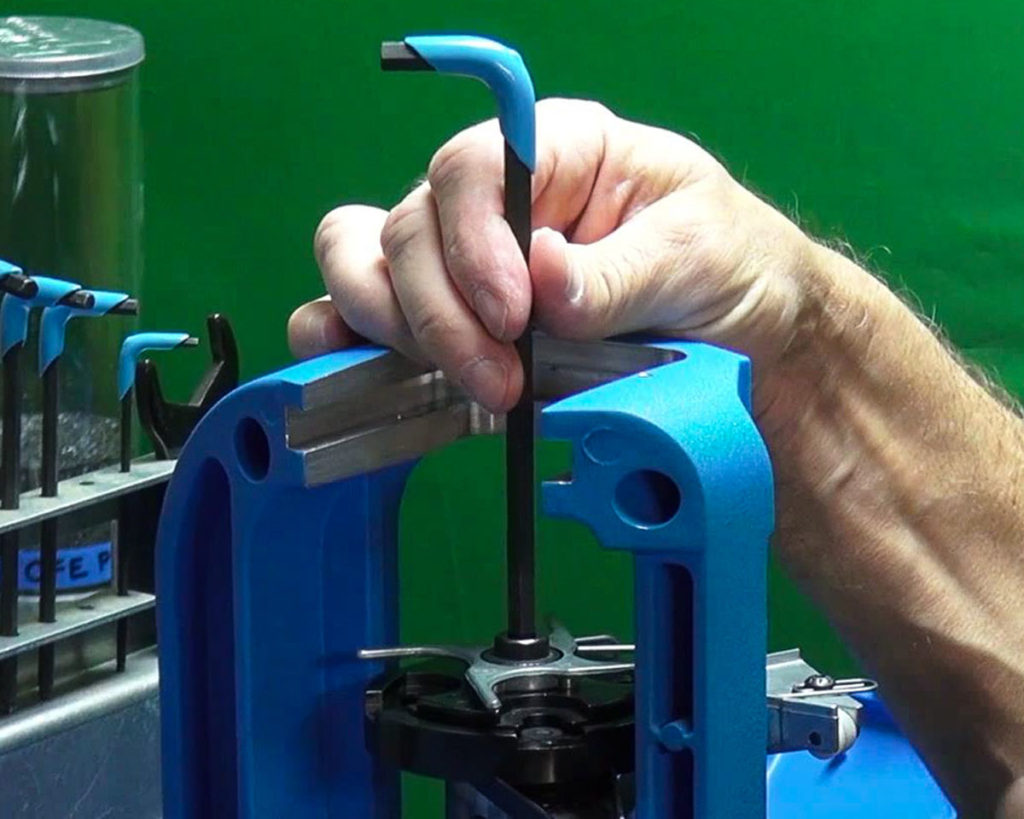 Dillon provides some pretty good instructions with their products. But you might be like me – and learn much better by watching someone else do it. That’s the purpose of this article (and the video, especially). But to be clear, what this article is NOT, is a tutorial on how to reload or in any way any specific load information about any specific caliber, etc. Whether you’re new to handloading altogether, or just adding another caliber to your repertoire – find good load data (preferably from the powder manufacturer) and follow it to the letter. 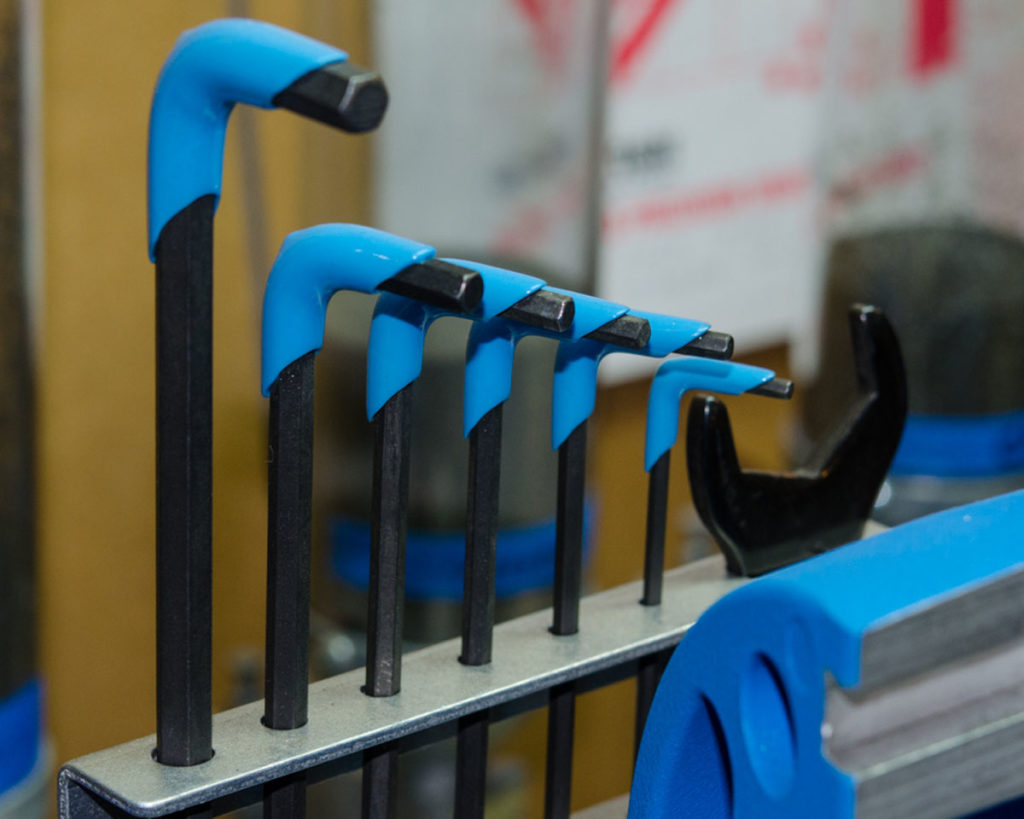 The author strongly recommends the Dillon Tool Kit for the 550 press. It will more than pay for itself in convenience over the years.

You’ll need your Dillon 550 to be ready to accept the new caliber conversion, which includes the tool head and its components, the shell plate, and the primer feeding system. If you have a press that is currently set up to load another caliber – remove the tool head and shell plate. If you’ll be using the same size primers you have the option of leaving the primer system in place. Now that you have a clean slate – and hopefully your tools ready – let’s get started! 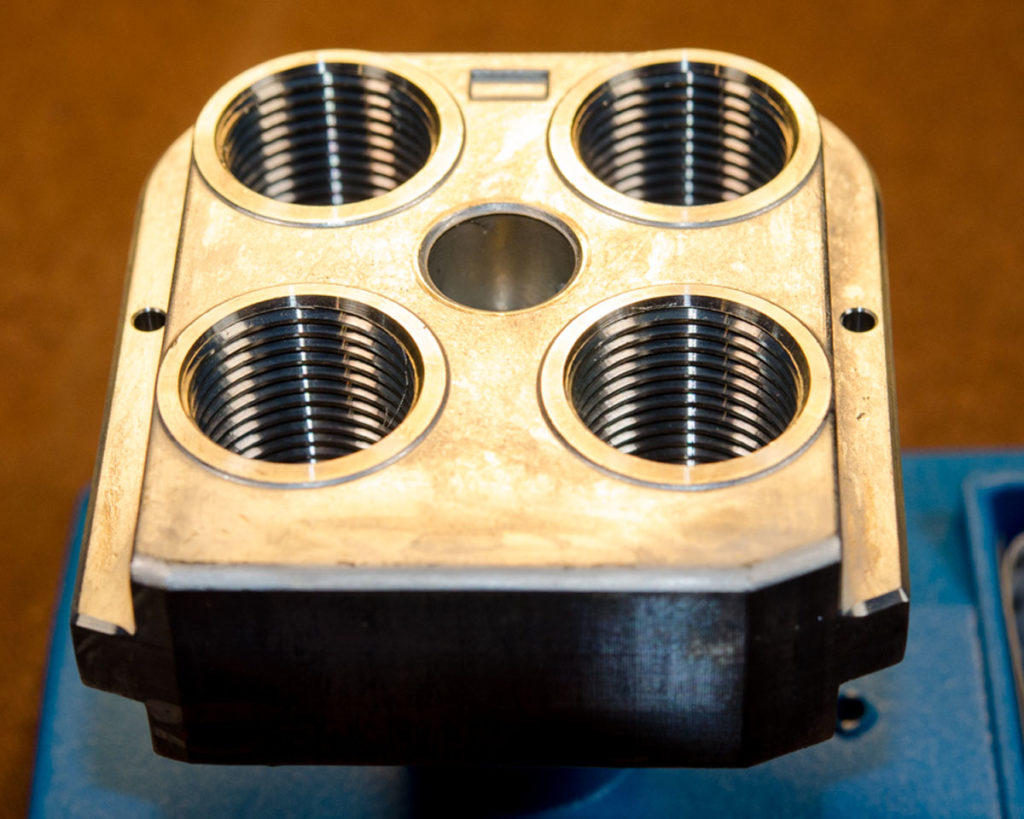 The Dillon system uses a removable tool head that simply slides into the top of your press and is held by two pins (not shown). 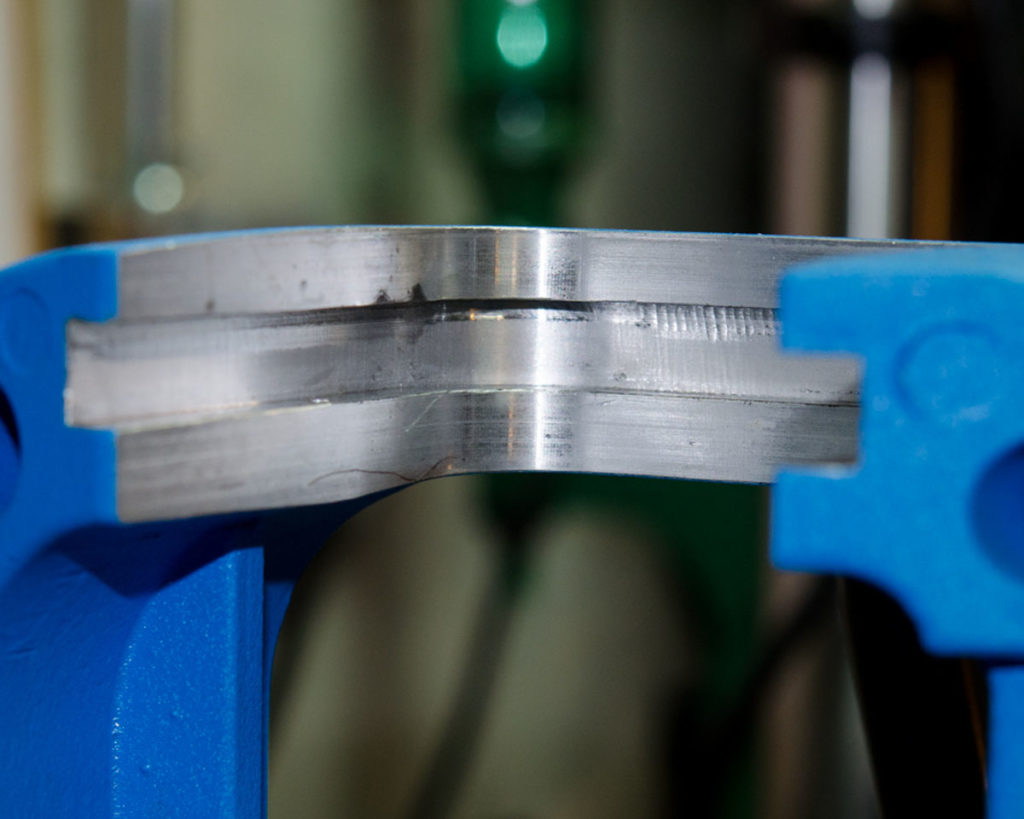 The sizing die is the easiest to set up. With the shell plate extended fully to the top position, screw the die down until it contacts the shell plate – then back it off about ½ turn. Secure the locking nut and you’re done. 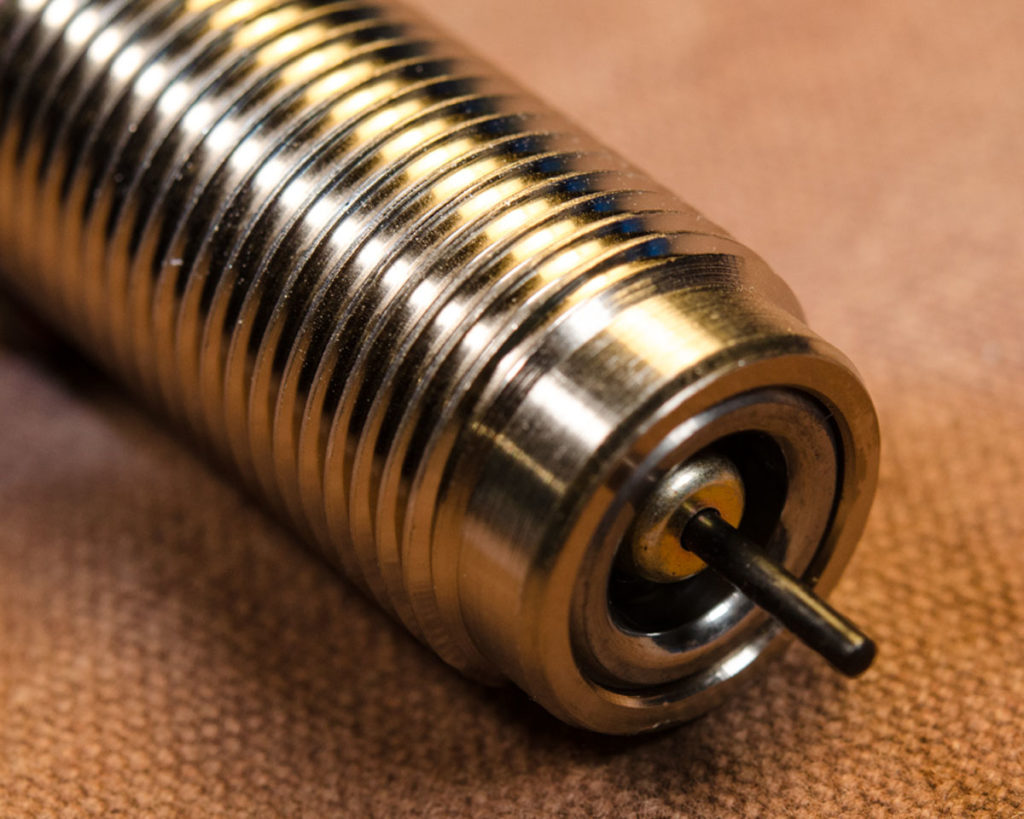 The resizing die is plug-n-play but has two parts that will break eventually – the decapping pin and the snap ring that holds it. Dillon provides a spare of each in the kit. 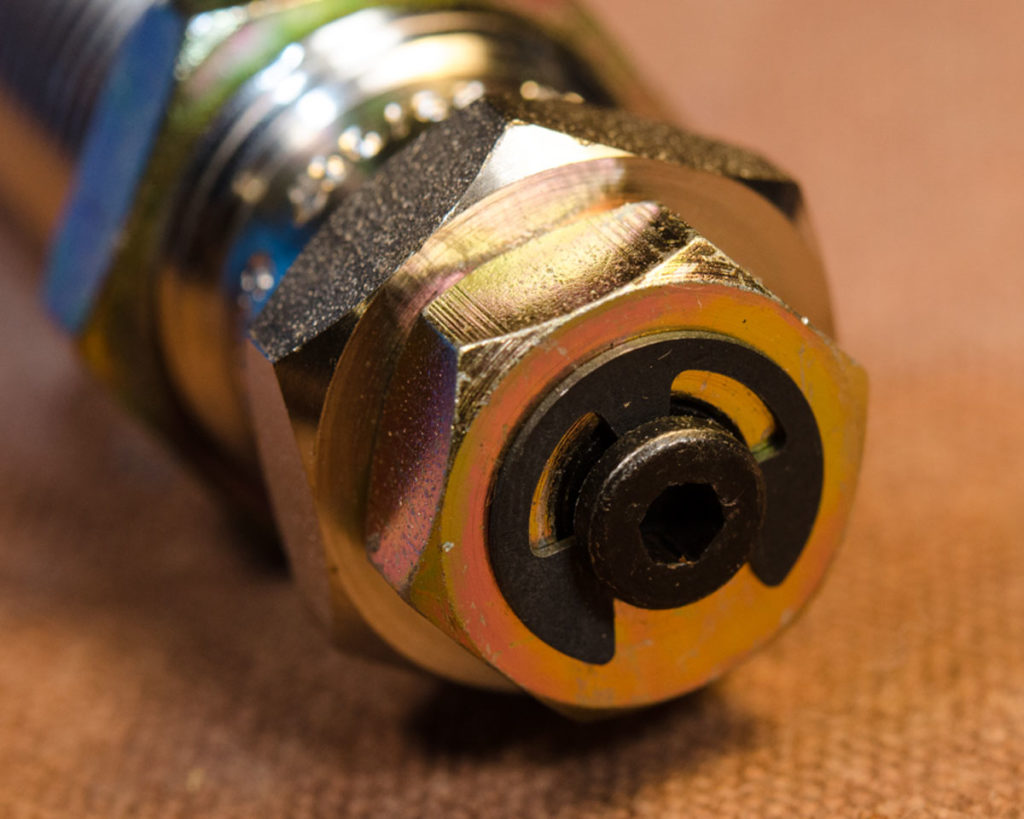 The second position on the tool head is for the powder measure system, which is the most complicated component of the group. In part because it has several moving parts, and in part, because it performs two important functions. The first function to set up is the case mouth flare (or “bell” as you may often hear it referred to). The die is easiest installed without the powder hopper attached (easily removed via two screws – see the video). 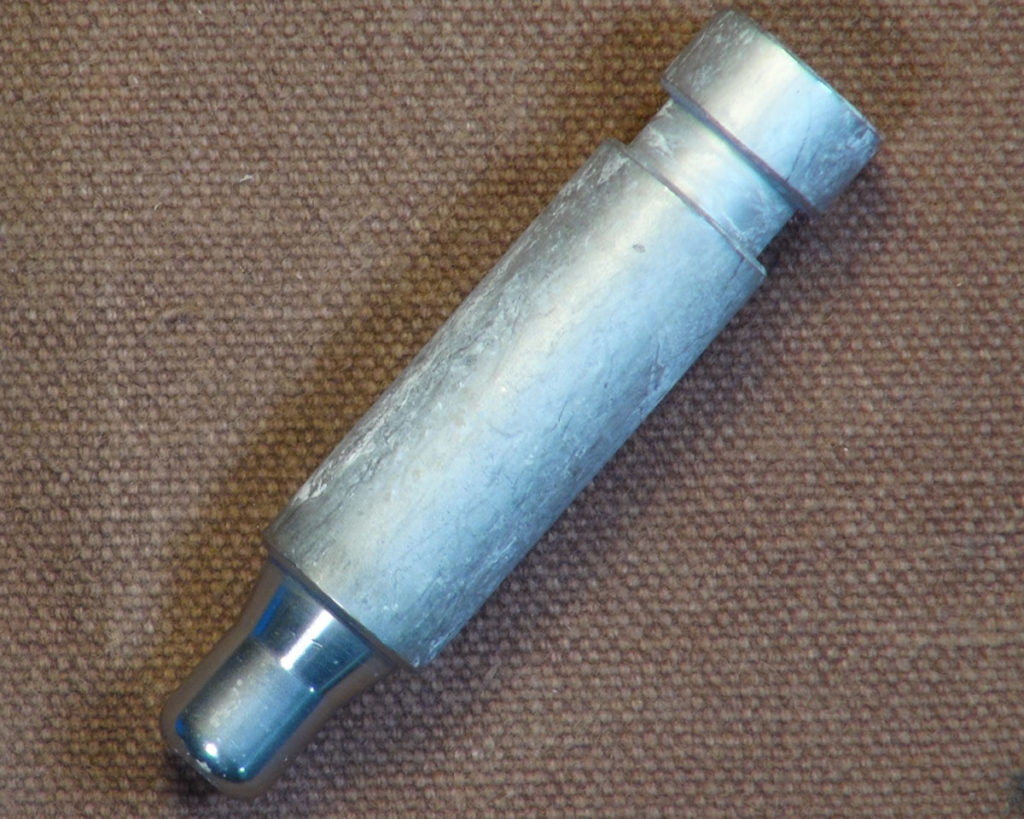 The powder funnel also provides the flare to the case mouth. 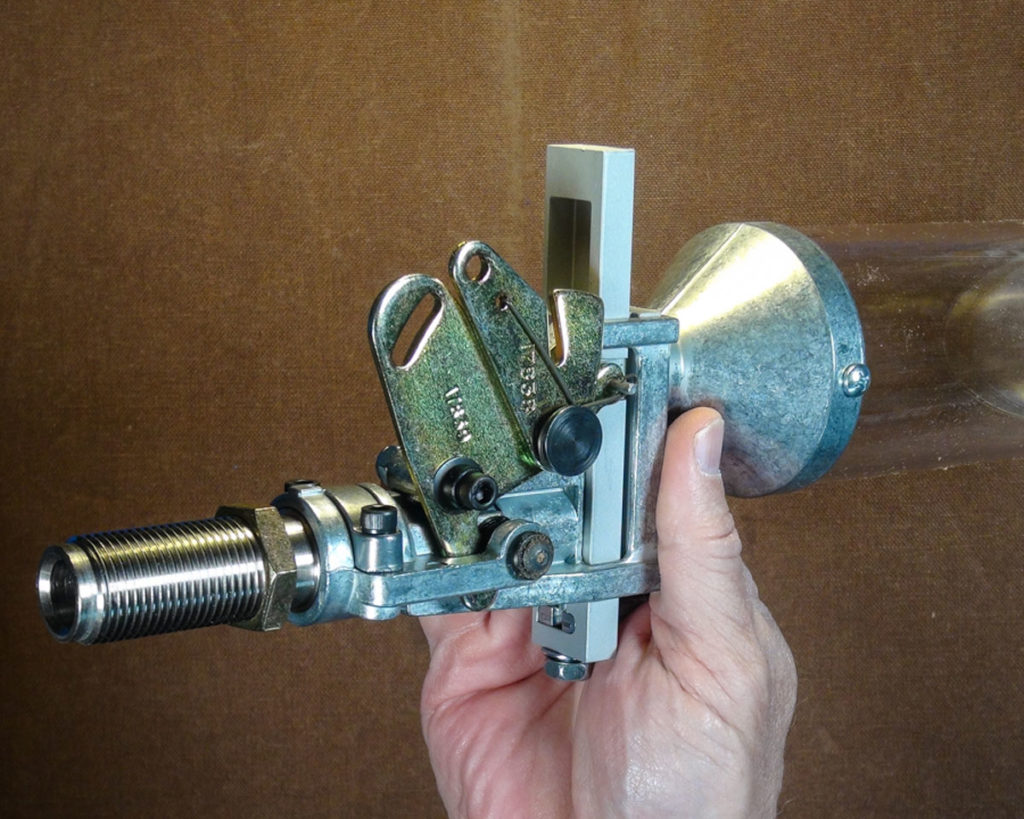 The powder charging station is the most complex and intimidating. It’s easiest to tackle in multiple steps.

With the shell plate fully raised and an empty and sized case in place, screw the die down – with the powder funnel inserted – until the case mouth pushes the funnel nearly all the way up. From that point, make slight adjustments and tests until the proper flare is achieved and secure the die with the locking nut. ½ turn or ¼ turn adjustments are best to start with. Next, mount the powder hopper/dispenser unit back on and make the screws finger tight. Position the safety rod that attaches to the tab beneath the shell plate and moves the powder measure so that the rod is straight and does not bind as the ram moves up and down. The purpose of this rod is to ensure that the powder dispenser fully closes with each operation of the handle. 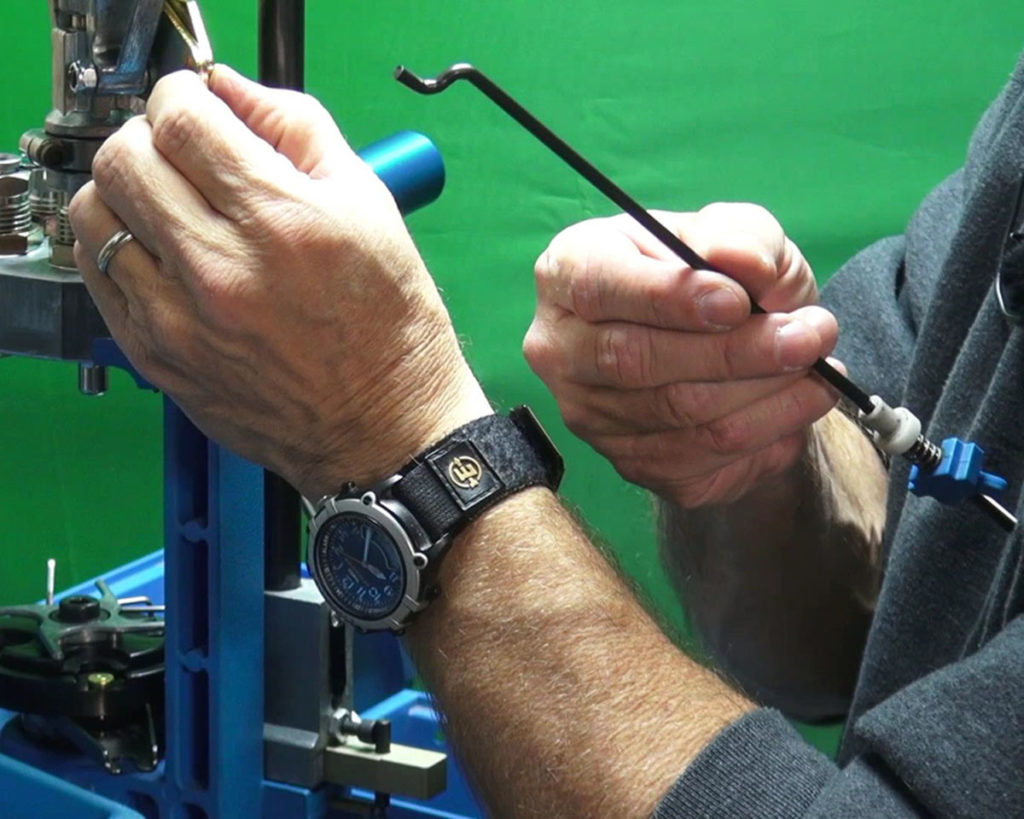 The safety rod ensures that the powder station dispenses only one charge and that it returns to its home position every time.

Once set, tighten the two screws to a snug fit. It’s anyone’s guess how much powder will dispense when you start to make those adjustments, but using the small bolt head on the rear of the unit (the Dillon wrench small end is used for this) turn the volume “up” or “down” as necessary to increase or decrease. Measure twice as often as you think you need to – and verify consistency with a dozen measured drops. There is no room for error here. 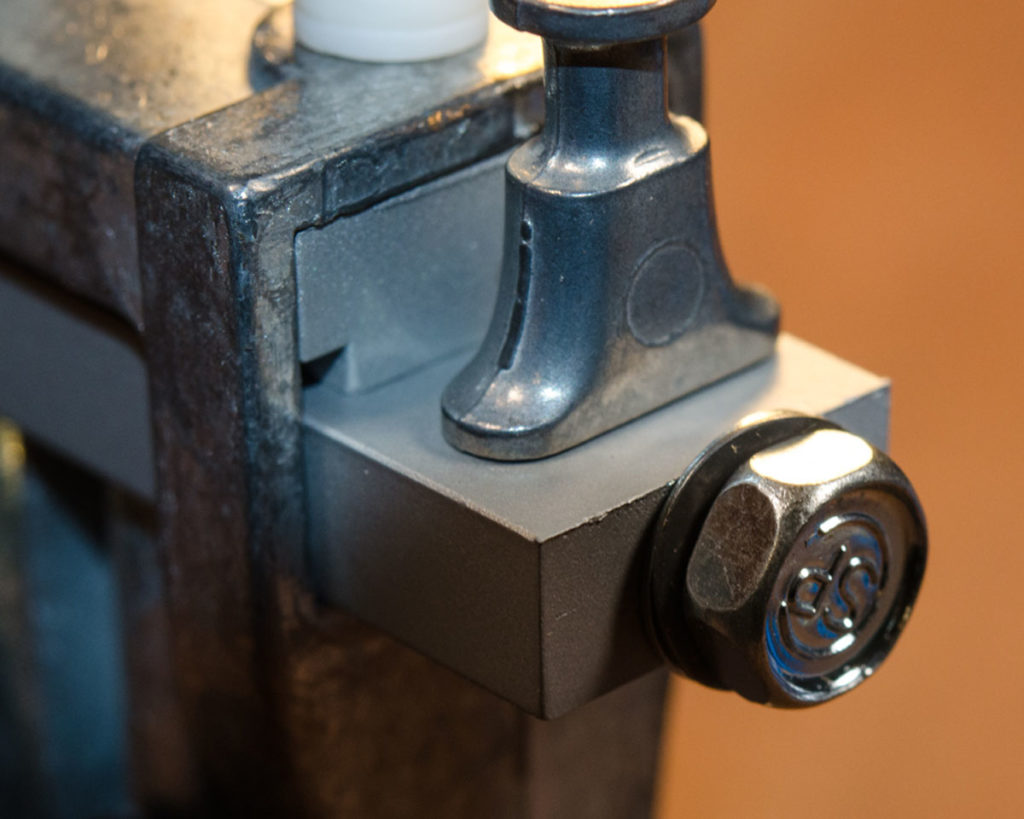 This adjustment screw is best thought of as the volume knob for your powder charge. Once set, it is incredibly consistent and reliable. 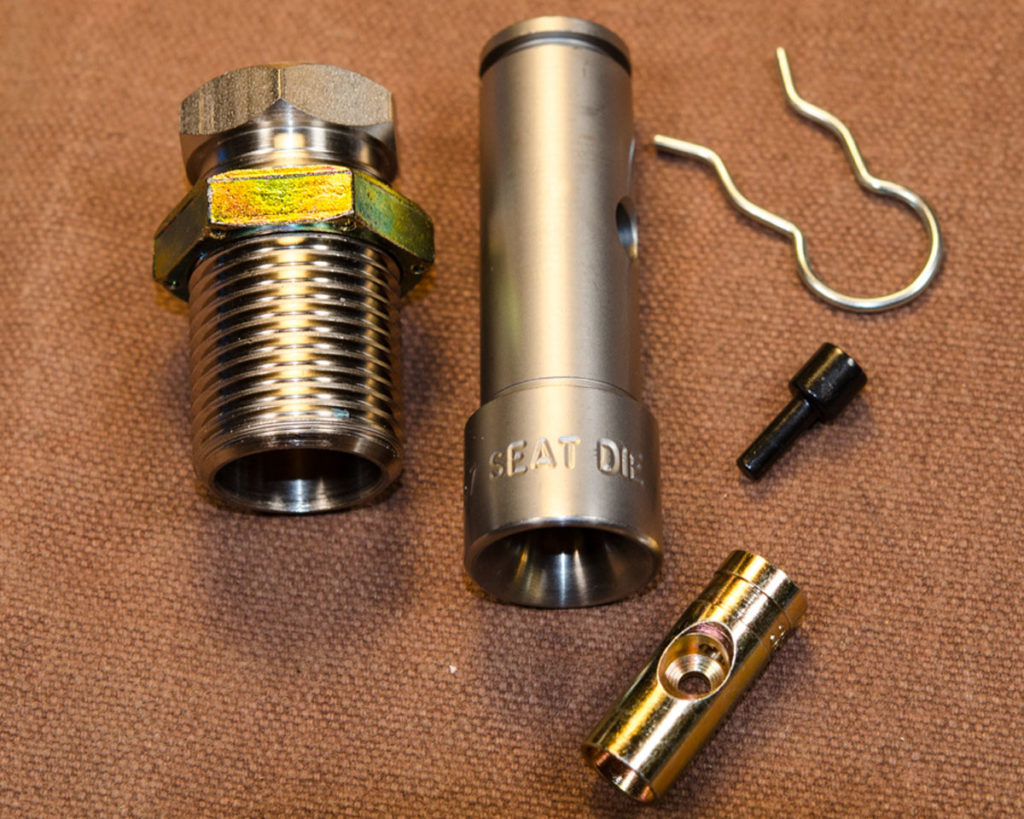 The seating die has many parts, and should be pre-configured to your bullet type.

Just as its name says, the seating die will place the bullet at the proper depth in the case. The best way to start is by having the die ready to seat the type of bullet you plan to use. There are at least two options, sometimes more (depending on caliber). There is a small “die within a die” that actually seats the bullet. Generally, there is a rounded cup and a square-bottom cup at opposite ends. The inner die is accessed by removing the retaining clip at the top of the die, allowing the inner portion to come out, and then removing a small pin that holds the inner section in place. It is designed so that this can be easily accessed without removing the die from the tool head, but I like to start with the seating end I need at the beginning. 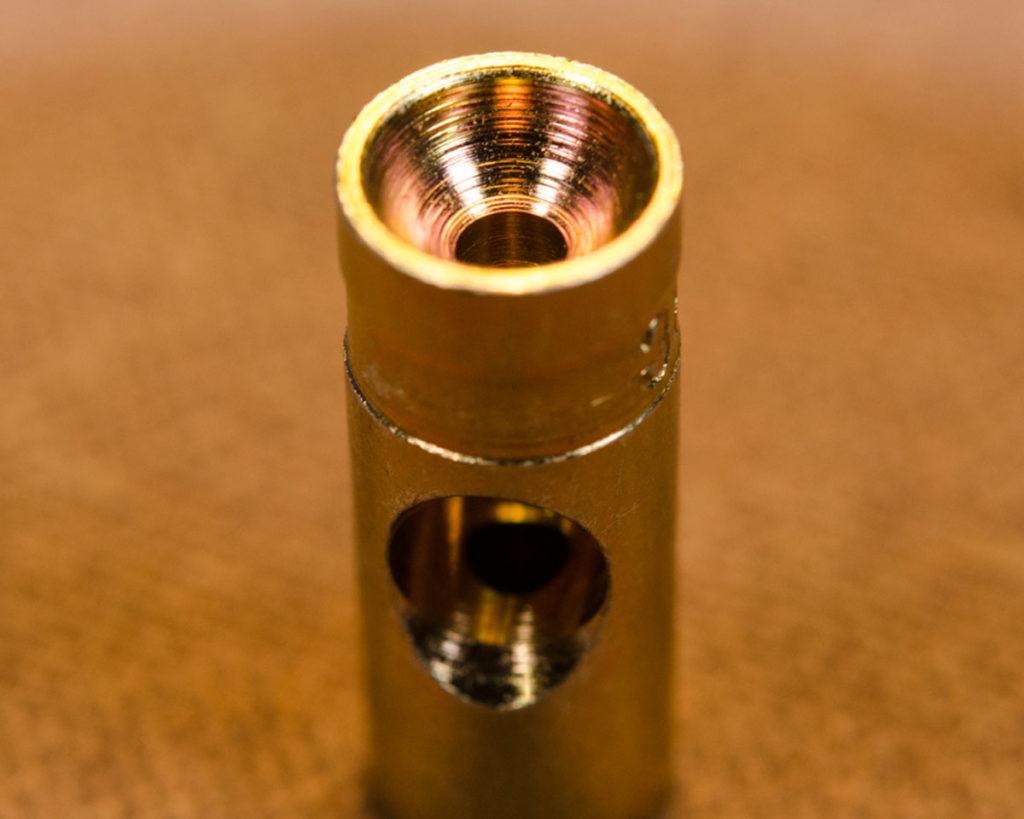 The inner portion of the seat die has a rounded end and a squared end. Match the best end to your bullet type.

Place the end that best fits the shape of your bullet downward, and re-install into the die. Screw the die down onto a fully extended case with the bullet resting in the flared case mouth, until it just makes firm contact. Move the ram down to its resting position, and start the adjustment process of setting the die to seat at the desired depth. Tip: Dillon says that each turn of the die equals approximately .070” of depth. I find this a good rule of thumb for starting, but the shape of the bullet can play a part. Once you have it where you need it – lock the die in place. 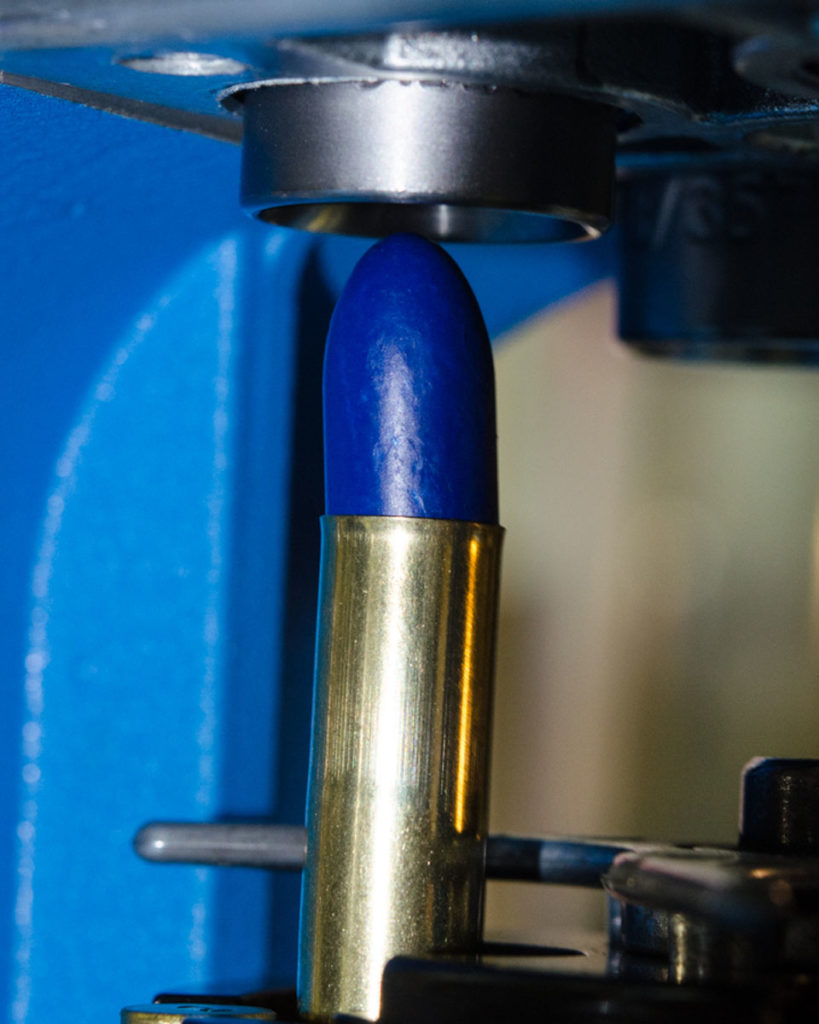 To set up the seat die, a flared case with a bullet rested on its mouth is used. 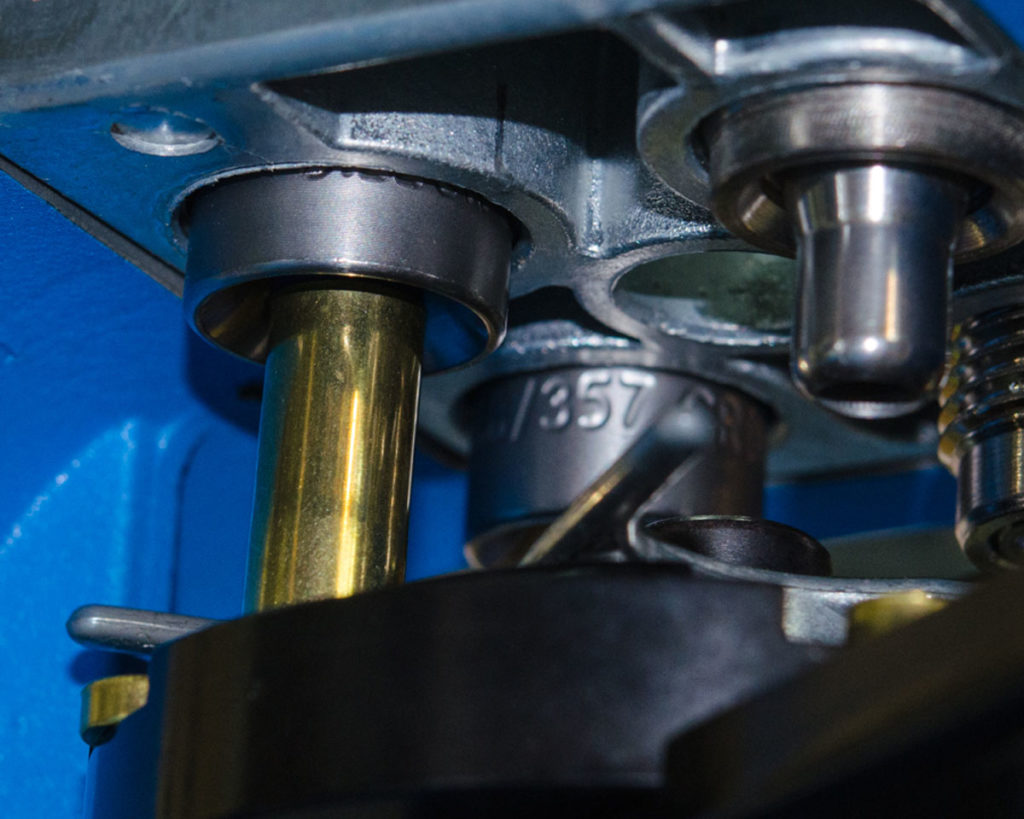 Make small adjustments to the seat die. Once you have gone past the desired depth, you’ll have to pull the bullet. DO NOT have powder in the case for this setup process.

The final step in the creation of your hand loaded new round is to crimp the case mouth. The crimp seems like a simple step and one that many hand loaders “ballpark”, but it’s important to understand what purposes this process serves. First, it reverses the flare we created to accommodate the bullet. It ensures that the case wall is sufficiently sized to be freely fed and enter the chamber of our gun – be it a semi-auto or a revolver. It is also there to hold the bullet at the precise depth we seated it to. This is very critical, and a subject worthy of further study. As with all our steps, we’re after the Goldilocks setting here – too loose and it won’t hold our bullet and might not fit our chamber – or worse, it will sink further down and potentially create a catastrophic increase in pressure. Too tight and it could deform our cartridge and the bullet, which would cause extra wear and likely ruin our accuracy. The easiest way to start the setup is to mimic the steps for the seating die and make our adjustments very small. The best test is to use a certified case gauge for your caliber and look for any special instructions from the bullet manufacturer. Tip: Most modern bullets that are plated rather than jacketed or polymer coated don’t need as much crimp as those heavy copper jackets require. In fact, it’s best to treat them like lead bullets. 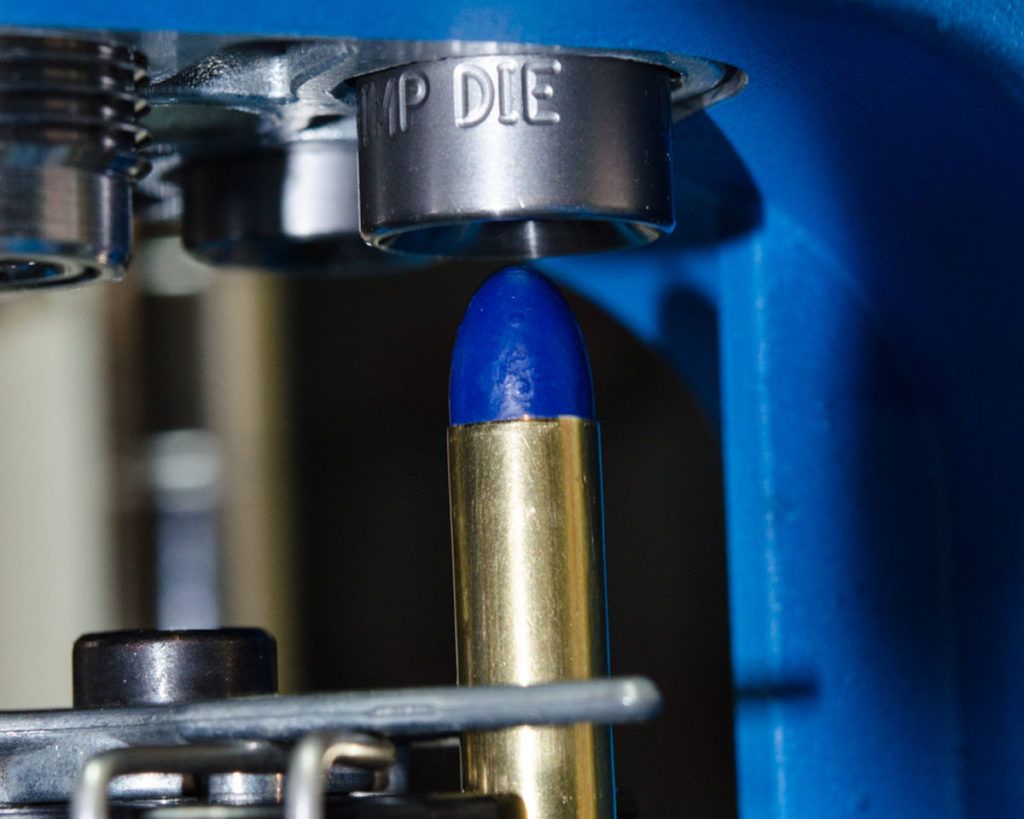 Crimp die setup is similar to seat die setup. The amount of crimp desired can vary by bullet type and planned use for the cartridge.

Now that you have your tool head and dies set up, you can become productive at loading your new caliber! Now, changing calibers is just about as easy as sliding one tool head out and a new one in!

Previous post: A Devil of a 1911: The 5 Tactical From Devil Dog Arms