Interim President Juan Guaidó of Venezuela is admitting that the populist push to remove the Nicolas Maduro regime from power is losing ground. Without military backing, the largely disarmed population has little to fight Maduro and his renewed forces.

MSNBC reporter Kerry Sanders pointed out that the balance of power may possibly have never been in the hands of the protesters in the first place. Under Hugo Chavez, Venezuela passed a gun ban in 2012 leading to confiscation and arrests as early as 2013.

“Not only hanging on but he appears to still control the military,” said Sanders. “You have to understand, in Venezuela gun ownership is not something that’s open to everybody. So if the military have the guns, they have the power and as long as Nicolás Maduro controls the military, he controls the country.”

The realities of fighting a military regime unarmed was not unnoticed by Venezuelans.

“Guns would have served as a vital pillar to remaining a free people, or at least able to put up a fight,” said Javier Vanegas, a Venezuelan teacher of English now exiled in Ecuador, late last year. “The government security forces, at the beginning of this debacle, knew they had no real opposition to their force. Once things were this bad, it was a clear declaration of war against an unarmed population.” 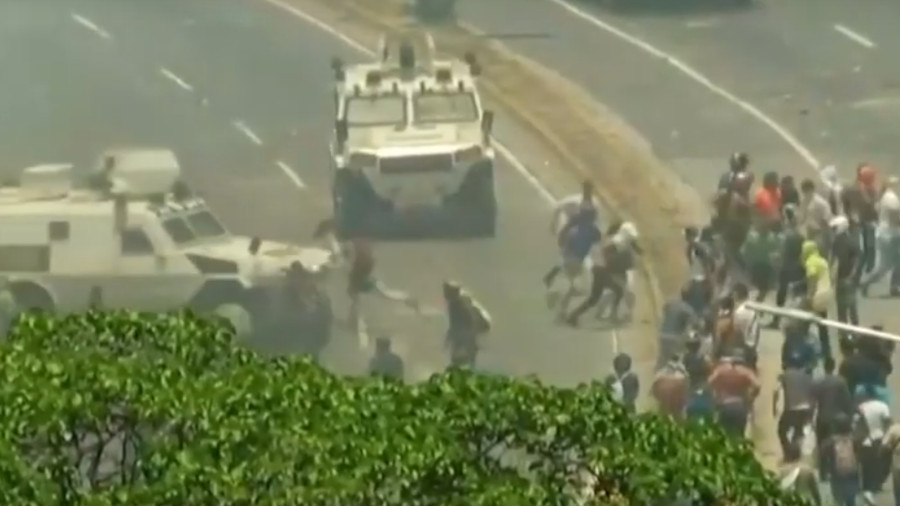 Video showing what appears to be Maduro forces running down protesters. (Photo: NYT)

See Also: How Gun Control Became an Instrument of Tyranny in Venezuela

“It was never easy to obtain a handgun permit in Venezuela but at least before 2012 it was possible,” said Daniel Di Martino, a Venezuelan expatriate, to the Daily Caller. “Since Venezuelans are unarmed we now depend on a military uprising for our freedom rather than a popular uprising.”

Earlier this week pro-Maduro forces opened fire on the protesters. Videos of an armored personnel carrier running over protesters has also surfaced (graphic). Tens of thousands of protesters turned to the streets to protest in an attempt to convince the military to split from the Maduro regime.

In a national address, Maduro said that the armed forces remain “united, cohesive and subordinate to their constitutional mandate,” in a display of leadership and military solidarity.