DIY: Convert Your A2 Gas Block to a Low Profile Gas Block 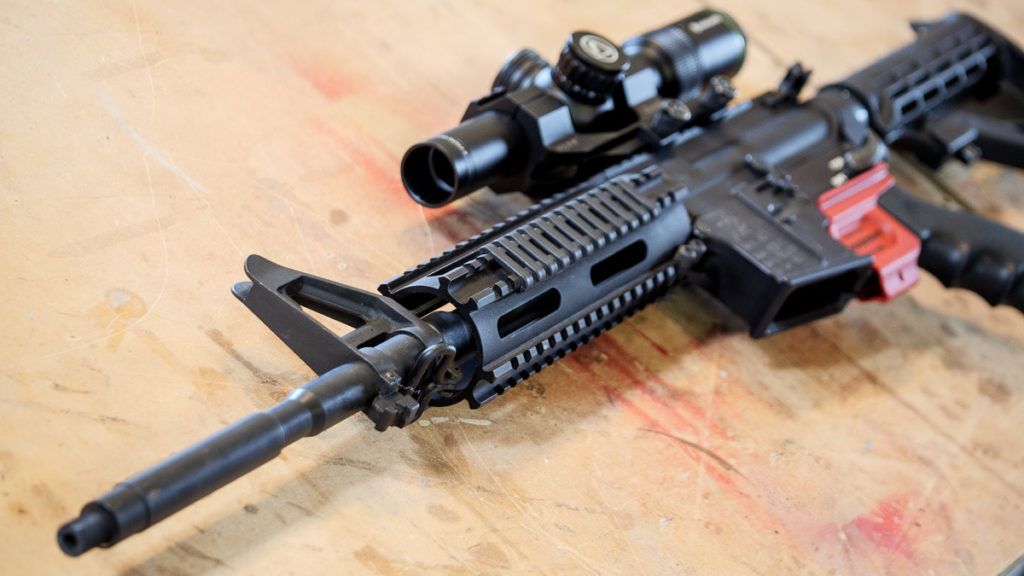 An A2 gas block interferes a little with the view through a scope, but mostly it just looks dated. Let’s chop it off.

My AR-15 is a Frankenstein gun. It’s got parts from at least five different guns I’ve owned. Overall, I like it, but the one thing that bugs me is the A2-style gas block. It’s that huge triangle at the front of the handguard. It was designed to be the front iron sight combined with the carry-handle rear sight. Now I’ve got a scope on my gun. The front sight actually sticks up in front of the scope, and while it’s visible, it doesn’t negatively affect the view through the scope.

I have to admit that my annoyance toward the A2 gas block is purely cosmetic. Still, it’s gotta go.

Why not just buy one?

You could simply buy a new low-profile gas block and install it on your AR, but if there’s one thing that’s almost as much fun as using explosives to launch projectiles from your gun, it’s making tons of sparks and pretending to be a metal worker. So, yeah, a new gas block would only cost about $30, but this is a fun project that’ll take less than an hour. Heck, if you want to, you could take the $30 and spend it on the tools to get this done and end up with a low profile gas block and a few handy tools. 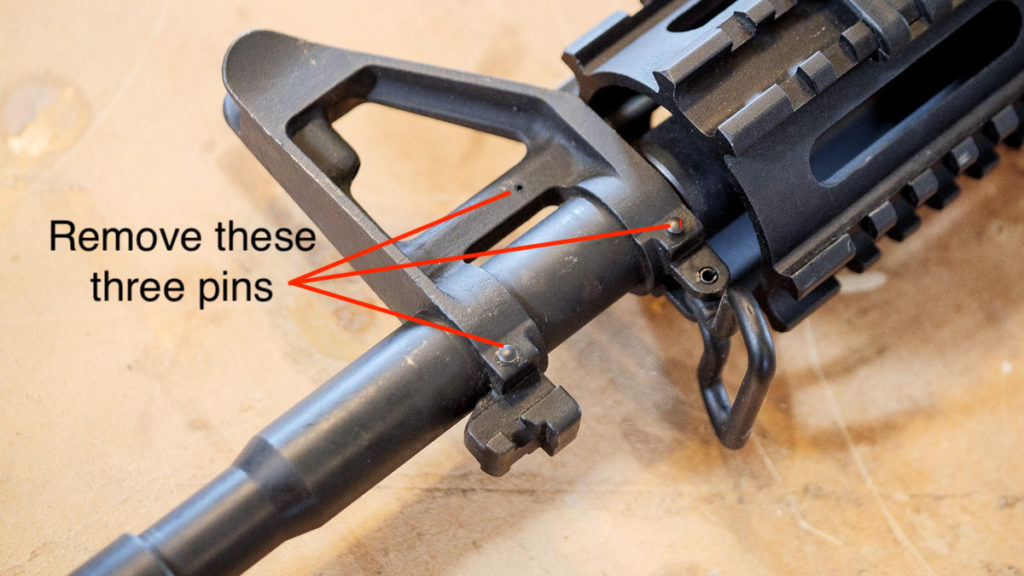 You need to remove these three pins in order to detach the gas block from the barrel.

You’re going to need a few specific tools. Don’t even start unless you have these because you’ll end up going to buy them anyway and then it’ll take a lot longer than an hour. Or, go to your uncle’s house, as I did; uncles have loads of good tools.

Use a 1/16″ punch to remove the roll pin. A roll pin punch is nice to have, but not totally necessary. Leave space behind it to push through.

The first thing you need to do is remove the roll pin that keeps the gas tube in place. Use the scrap wood to prop up the sight and support the rest of the gun: The idea is to make sure your force is all applied to the pin, and not to another part of the gun–like the scope. Prop it up and leave space behind the pin to push it out. The gun should be oriented so its left side is up, probably with the barrel pointing to your left.

Use the 1/6″ punch to push the roll pin out. Use a small hammer so you don’t apply too much force. The thing to avoid is deforming the roll pin, but don’t be too dainty with it, either. You might even apply a little CLP to the pin and let it set a minute to help it loosen up. Once it’s out, keep the pin oriented so you know which way it was in the hole so you can put it back that way. Oh, and don’t lose it. 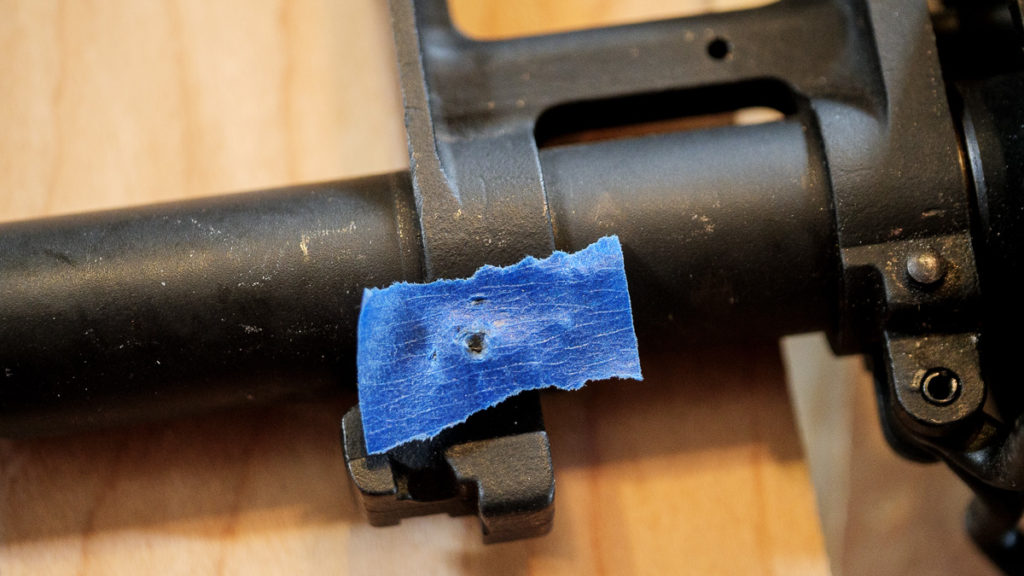 Use a little masking tape to add a little grip for your punch to keep from slipping off and marring the surrounding metal.

Now remove the two pins under the barrel. These are tapered so they only move one direction. Make sure you’re working on the weapon’s left side and pushing the pins toward the right side. I used a little masking tape to help keep from marring the block. Keep these pins in the right orientation when you remove them so they go back in the right way, too. 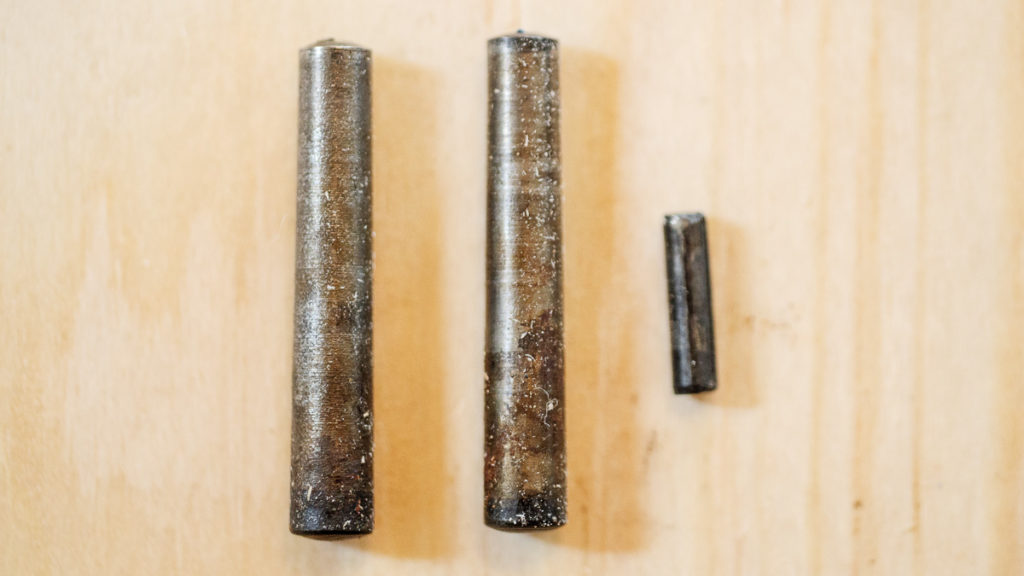 After you’ve removed them, keep the pins in the same orientation they came out in. The larger pins are tapered and will only fit one way, and it’s just good practice to keep the small roll pin the same direction.

Remove the gas block, but remember that there’s a tube going into it so don’t twist it too much until the tube is clear. If you have a flash hider or break on the front, you’ll need to remove that, too, and an adjustable wrench should do it.

If you have a flash hider or break, remove it from the barrel to get the block off. 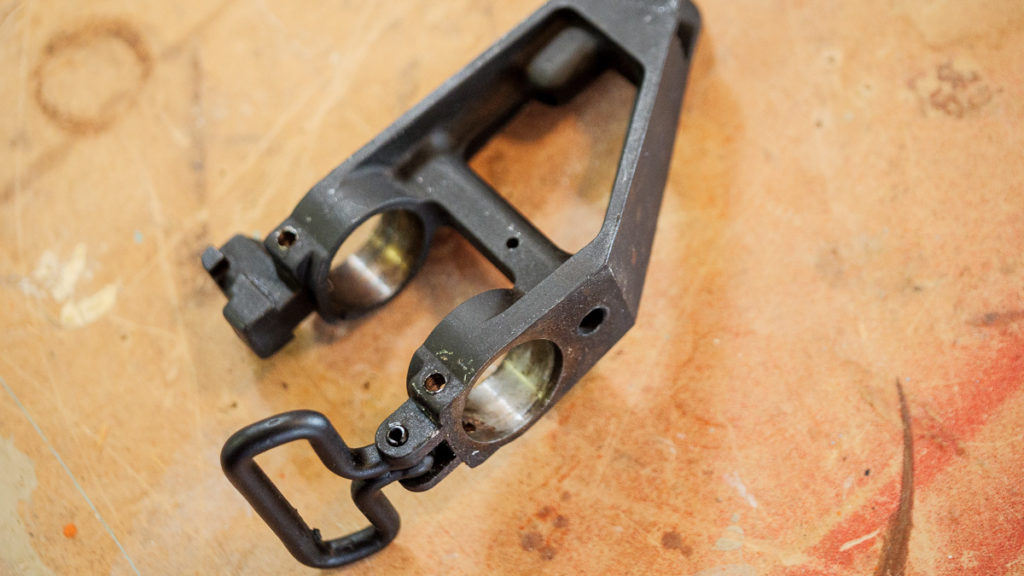 Now you’re ready to trim off the extra bits from the gas block, but don’t get carried away–stay away from the holes.

4. Trim the sight off

Now you’re ready to cut off the top of the block. Lock it down in a vice, or clamp it to an edge and get to work. Just a few things to remember: Don’t get so excited making sparks that you trim too much–the gas tube still has to go back in there, so don’t trim into its cavity. Also, take a look and make sure you trim it low enough to fit under the handguard. I’ll probably get a rifle-length handguard in the future, so I want it to fit under that. Lastly, I was surprised at how easily the metal cut away so start gently and work into it.

Be careful–it’s hot from grinding.

Use your file or emery paper or rotary brush to clean up the edges and remove burs produced by cutting. This is purely cosmetic–you could just assemble the gun back together, but you’ll be glad to have smooth edges in the long run.

6. Paint or blue the block

The raw steel you’ve exposed is now susceptible to rust. You should paint or use some bluing agent to protect the steel. I chose to paint it, but I think if I did it again I’d buy some bluing (like that from Birchwood Casey) because I think it will have better coverage. But, I had some automotive spray paint on hand, and so I tried it out. 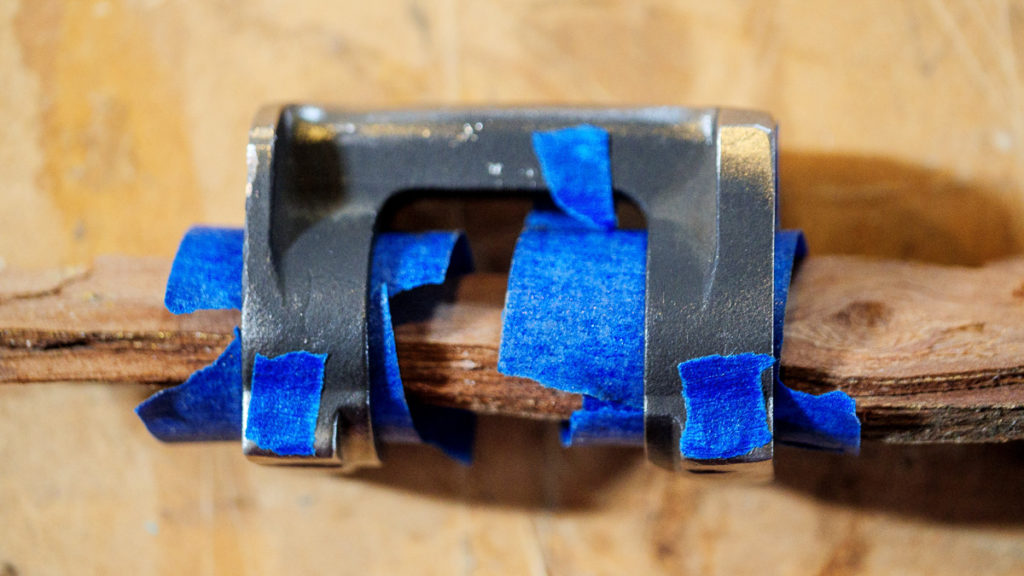 A tough automotive enamel will protect the raw metal; be sure to mask off all the holes. If I did it again, I’d use bluing fluid instead.

If you choose to paint, be sure to completely mask the holes and bushings so the block will fit back on the barrel and the pins will fit back in their holes. 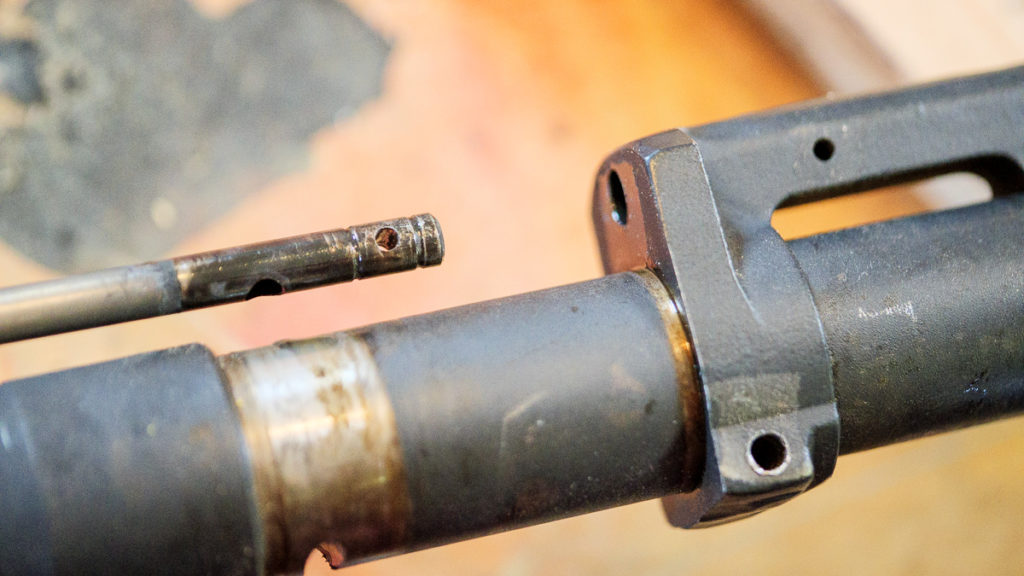 Align your new low-profile gas block with the gas tube.

Now position the gun so its right side is up on the bench. Put it up on the blocks again so that your hammer strokes will drive straight down on the block and not put pressure on the rest of the gun. Put the gas tube back in the gun, and the slide the gas block onto the barrel and fit the tube in place. Align it so the roll pin fits through both the block and the tube and use your light hammer to gently drive the roll pin back though.

Make sure the right side of the gun is now facing upward so you’re driving the pins back in the way they came out. 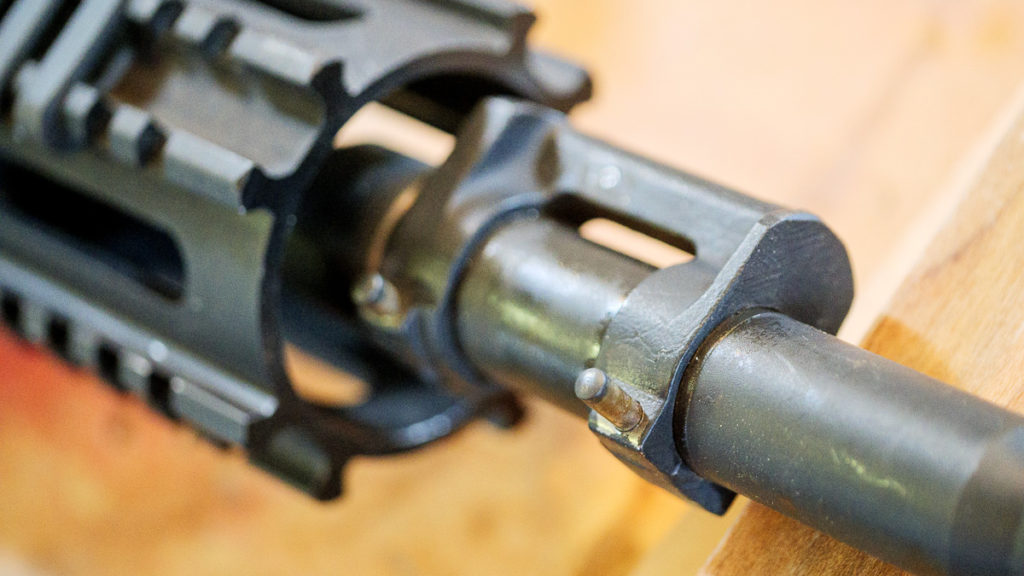 Tap the pins back into place a little at a time and at the same time. Continually check the position of the block and the handguard so that they stay aligned. Tap one pin, then the other until they are all the way back in.

8. Quit drooling and zero your weapon

Nice work! Now quit admiring your work and go out and check you zero–whacking a gun with a hammer could potentially make other things move. It wouldn’t hurt to do a little cleaning and lubing while you’re at it. 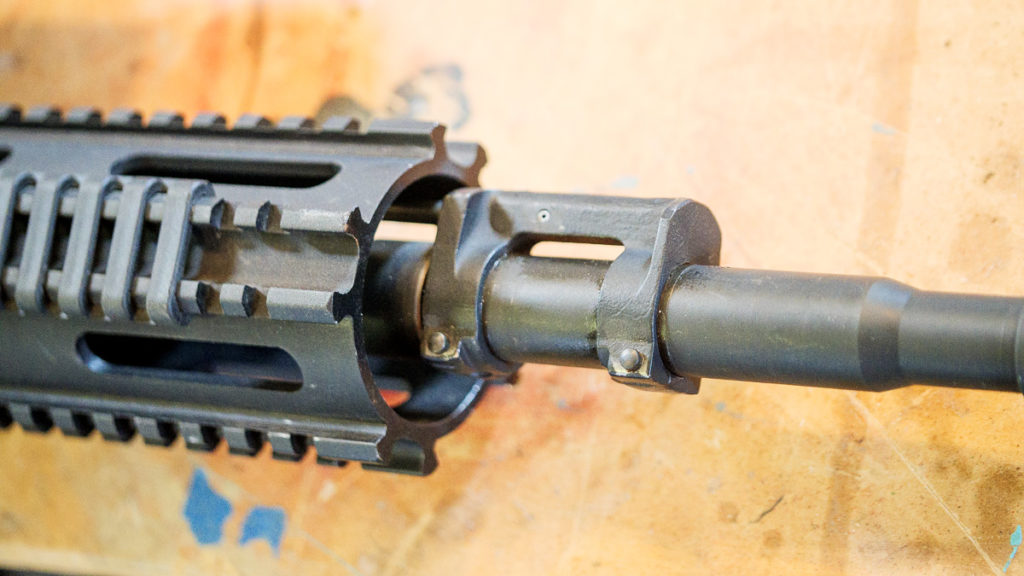 That’s it. A new low-profile gas block, and $30 saved–or spent on new tools 😀

It’s not the prettiest gas block in the world, but it was a fun project with satisfying results and you either saved yourself $30, or you justified $30 worth of tools: Either way, I call it a win.