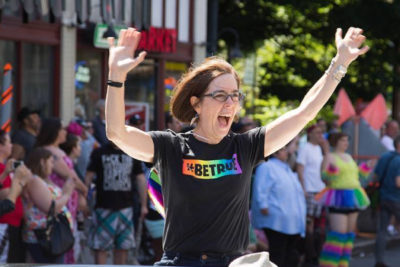 The Democrat-controlled Oregon legislature would become the most restrictive state in the Union with a new raft of gun-control measures set to be considered in this year’s legislative session.

Among other restrictions, SB 501 would require a permit to purchase any kind of firearm, cap magazine capacity at five rounds, limit ammo purchases to 20-rounds per month, and delay firearm transfers for 14 days.

The bill is being sponsored by Senator Rob Wagner (D-19) and Representative Andrea Salinas (D-38) at the behest of a Portland-based student group called “Students for Change.”

Wagner said that it’s “probably a long shot that something like this passes in whole cloth,” but he submitted exactly what the students wanted. Wagner also admitted that the students did all the research for the bill, and he hasn’t looked much into its constitutionality.

Democrats hold supermajorities in the House and Senate and are backed by a Democratic governor. But Republicans in the Oregon legislature are still encouraging their constituents to visit the capitol in opposition to the bill.

“Oregonians need to show up to the Capitol and express their concern over their personal safety and the harm caused by this kind of legislation,” Rep. Bill Post (R-Keizer) said in a statement.

Post pointed out that the ammo restrictions will severely limit how much gun owners can practice with their firearms. Hunters may not be able to meet their bag limits with 20 rounds per month, and the mag restrictions would outlaw six-shot revolvers.

“The Oregon Constitution is clearer about the Second Amendment than the United States Constitution. We value and respect firearms in Oregon — and this is not a partisan issue,” Post concludes. “The bill is culturally blind to the heritage of our state and Oregonians’ values.”

The bill would also require permission from a county sheriff to purchase any kind of firearm.

To qualify for a permit, a gun owner would need to be at least 21 years old; have no criminal convictions; not have violated a restraining or stalking order; not use illegal or controlled substances; and provide proof of completing a firearms safety course.

Even if a person meets all those requirements, a sheriff could still deny the permit if he or she believes the person is “likely to be a danger to themselves or others.”

The legislation would also limit firearm purchases to one handgun and one long gun per month, require firearms be stored in a locked container or with a trigger/cable lock, require reporting of lost or stolen firearms within 24 hours, and require background checks for purchasing ammunition.

If passed, many of Oregon’s new policies would likely be held up in state and federal courts. Article I, Section 27, of Oregon’s Constitution (to which Rep. Post alluded) states, “The people shall have the right to bear arms for the defence [sic] of themselves, and the State, but the Military shall be kept in strict subordination to the civil power[.]”

Previous post: Improve Your Beretta with Langdon Tactical’s ‘Trigger Job in a Bag’