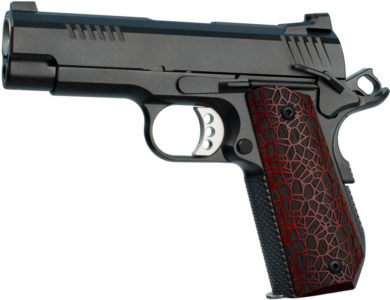 The Evolution series is thinner and lighter than standard 1911s. (Photo: Ed Brown)

Ed Brown, one of the best 1911 custom shops in the world, has been tinkering with a new take on the 1911 specifically optimized for 9mm Luger. They’re rolling it out using a new batch manufacturing process that delivers guns at a much lower price, too.

The new guns, based on the Commander-size Kobra Carry Gen 4 design, make up the Evolution series, starting with the KC9. These guns are built for everyday carry and concealed carry, weighing less than standard 1911s with a smaller footprint. They do use standard 1911 magazines and have a 9+1 capacity.

Some weight is shaved by going with a 4-inch slide and barrel and bob-cutting the grip, but most of the weight loss is thanks to a narrower slide built for 9mm ammo. Unloaded with a magazine Evo pistols weigh 34 ounces. Another slimming touch is a redesigned, recessed slide stop for a snag-free draw. 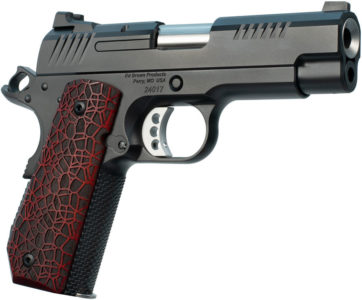 In addition to the extremely popular Bobtail grip, the Evo series includes many modern 1911 improvements. The guns feature external extractors, high-visibility machined U-notch night sights and a flat wire recoil assembly. The barrel has a bull profile and a recessed, target crown.

The “7-Top” contoured slide has front and rear slide serrations and the grip frame has deep “Snakeskin” scalloping on the frontstrap and mainspring housing for a positive grip. Helping with that are Ed Brown’s Labyrinth Grips which not only improve handling, they give these guns a very unique look.

“We have made it our goal to make Ed Brown the first choice in custom 1911s,” said marketing director John May. “Why settle for less, when you can own the best. This is another step to make sure that our customers have the best quality product, at the best possible price. Just one more reason – if you have not looked at Ed Brown in a while – it is time to look again.”

Because these are semi-custom guns made in batches with a fixed feature set Ed Brown can deliver them at a significantly reduced price point. The retail price for these is $1,895. That’s about 30 percent less than a fully custom Ed Brown. Delivery is expected in 90 days.

Right now the KC9 is available with a black finish but Ed Brown is teasing a stainless pattern to follow. The only major option right now is an ambidextrous safety, which pushes the price just over $2,000. Still, that’s a far cry from the original Kobra Carry line which runs in the mid $3,000 range.

If you’re looking for the best in 1911s for everyday carry or just for barbecues, it’s hard to beat Ed Brown for top quality and fantastic fit and finish. We look forward to what’s next in the semi-custom Evolution series.