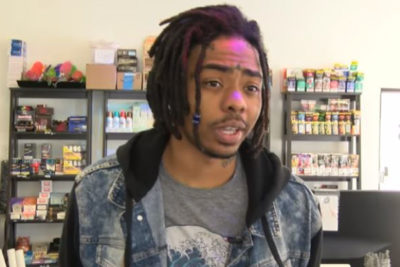 Jerry Lawrence was fortunate he hadn’t had a chance to disarm before the robbers entered the store. (Photo: Youtube/Screenshot)

A harrowing incident at a smoke shop in Savannah, Georgia, offers several key takeaways for practitioners of armed self-defense.

Jerry Lawrence had just opened Mary Jane’s Vape and Smoke Shop when two customers entered the store. Thinking they were innocent patrons, Lawrence turned his back and walked behind the counter while speaking on the phone with the store’s owner.

“I opened up the store that morning,” Lawrence told local media. “It was maybe around 10:20, 10:30 when they came in. I thought they were just regular customers.”

The two men donned masks and gloves and one of them approached Lawrence from behind with a gun.

“When I turned my back, all I hear is someone say ‘go ahead and give it up. Turn back around,’” Lawrence said. “They already have their masks on, gloves on.”

Lawrence says he always carries a firearm for self-defense, but while he’s working he usually keeps it in his bag at the back of the store. Fortunately for him, he hadn’t had the chance to unholster his weapon after opening the store, and he still had it when the robbery began.

Security footage shows Lawrence create distance between himself and the men, which allowed him to pull out his gun and chase the men out of the store.

But once the men exited the building, they appeared to Lawrence to reconsider their retreat.

“When they got to the edge of the street, they kind of acted like they were about to turn around,” Lawrence said. “So, I just fired two warning shots.”

Warning shots, despite the advice of our former Vice President, aren’t considered an effective or responsible means of self-defense. Warning shots can endanger innocent bystanders, and prosecutors can use them to prove that the situation didn’t necessitate deadly force.

Rather than indicting the perpetrators of violence, state attorneys sometimes charge victims with “wanton endangerment”  or “reckless discharge of a firearm.” While Lawrence appears to have escaped prosecution, his actions could have landed him in hot water.

He didn’t escape unscathed, however. He told local media that the experience has him concerned about future customers.

“It was a very traumatizing experience cause, you know, they walked in as customers but turning my back for a few seconds turned into a movie scene really fast.”