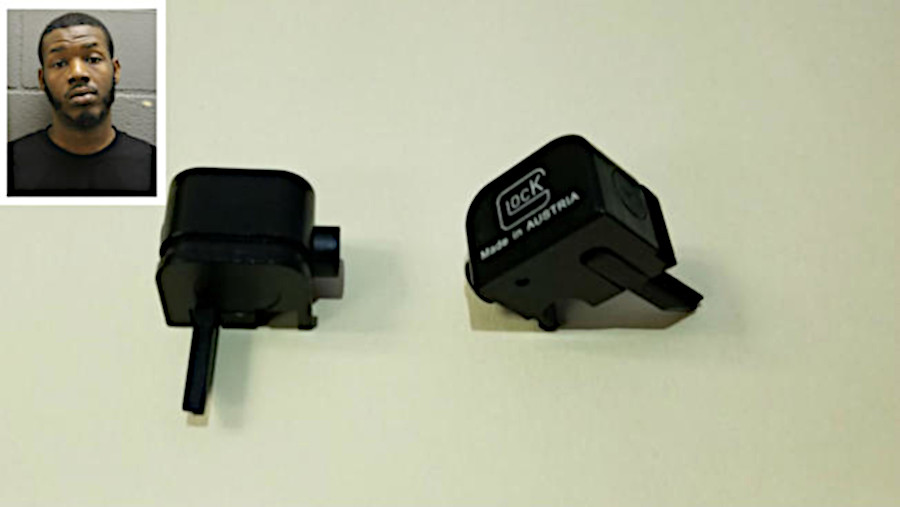 Devante Murphy, 26, was arrested after jumping off a balcony to escape investigators. He had two machine gun conversion kits with him. He was arrested by Homeland Security. (Photo: Cook County Sheriff’s Office)

These parts include 80 percent conversion kits, kits marketed as airsoft parts that work with actual firearms and plainly illegal machine gun parts. The 80 percent kits and airsoft parts aren’t illegal as sold, but can, in some cases, be used illegally.

Because Glock pistols are so common, it’s easy to make universal parts to convert them from semi-automatic pistols to machine guns. While this is legal for certain manufacturers — and obviously airsoft enthusiasts — it is generally illegal for regular gun owners to build machine guns even if it’s legal for them to own firearms.

While some of these prosecutions are related to other crimes, two of the cases involved the federal agents investigating sales specifically, in Chicago and St. Louis.

In one case the ATF discovered a Chinese website that was selling full-auto conversion kits and requested a record of kit sales. The ATF opened an investigation on Garnell August Carter, 19, who used PayPal to purchase 13 conversion kits.

This in and of itself shouldn’t worry most gun owners, but it may indicate what steps the ATF and other law enforcement agencies could take under the new bump stock ban.

The President’s recent bump stock ban re-classified all bump stocks as machine guns. Few owners have complied with the ban, with hundreds of thousands of owners refusing to hand over their stocks.

The ban is facing legal challenges but so far, courts have sided with the President and the ATF. If the ATF or other agencies decide to dig into sales records, things could become ugly for anyone who bought a then-legal bump stock under current law.

For now, it appears that these agencies are focusing on people intent on committing serious crimes, not people caught up in the controversial bump stock ban. Time, and the courts, will tell what this means for formerly law-abiding citizens.

Previous post: Tucker Takes a Stand Against Gun Confiscation: ‘I would never give up my gun’