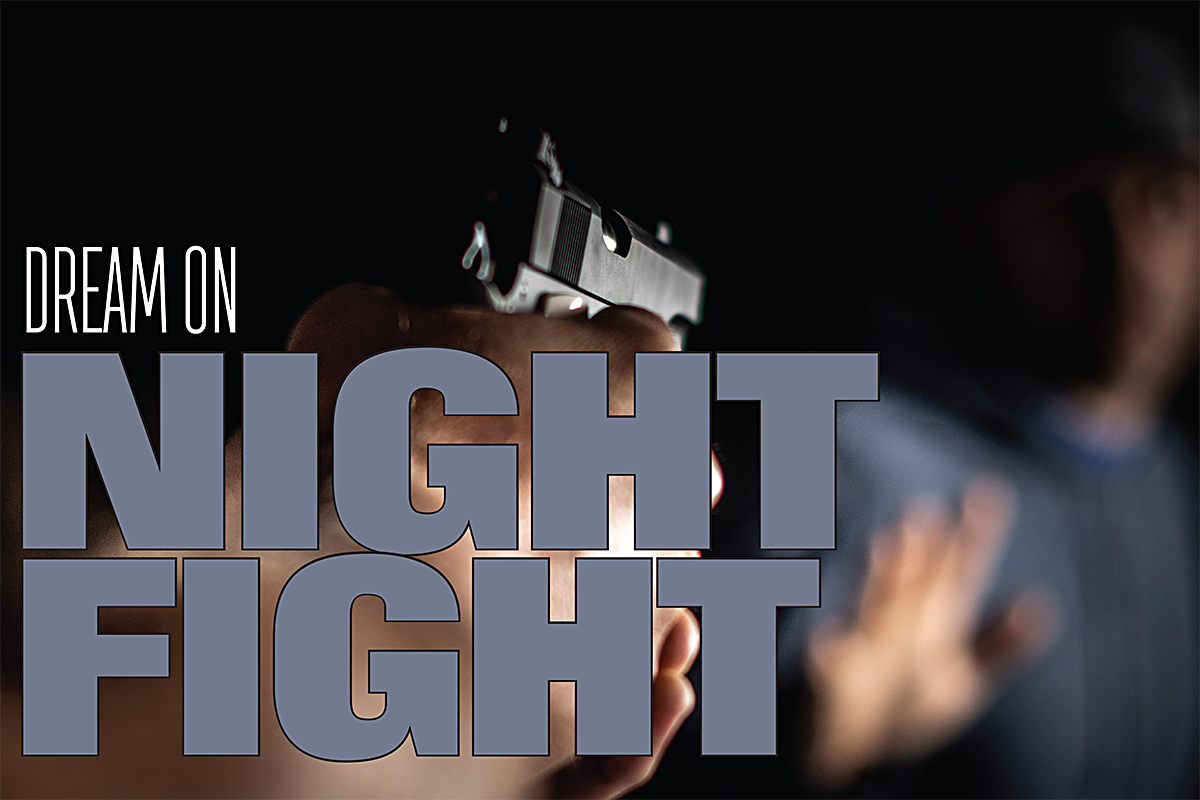 Editor’s Note: The following is a syndicated article by author Ed Combs that first appeared in USCCA’s Concealed Carry Magazine Volume 15, Issue 8, November/December 2018 under the title, “Night Fight: Dream On.”

Humans spend about a third of their lives sleeping, and that’s a reality that some violent predators take into account when plotting their assaults. It’s no secret that bad things have a tendency to happen in the dark, and it’s just as well-known that the criminal who forces entry into a residence under cover of darkness is understood to be a mortal threat. Most people are home sleeping in the middle of the night, and the kind of man who would commit what he’d have every reason to believe is a home invasion rather than a burglary is sending a very specific, very clear signal.

We here at the USCCA and CCM spend a lot of time talking about the training, tactics, equipment and legality involved in the self-defense equation, but those are really just a few of the variables in a far more complicated situation. Some free radicals are almost entirely out of human control, chief among them your need for sleep and what your body does while it is sleeping.

Legendary Royal Marine Major Phil Ashby has personally faced down more danger than a thousand average men. The highlight (or lowlight) of his military career was his 2000 escape from a cannibal warlord while in Sierra Leone as an “observer and peacekeeper” during that nation’s civil war. The UN sent Ashby and others to the war zone with the best of intentions, and, in what I’ll admit is the understatement of this issue, things went south.

He and the few other men who survived the initial rebel attack were up against it: running for their lives through thick, steamy jungle trying to keep ahead of coked-up monsters who had stated their intention was to literally skin and eat Ashby and the other men alive. One of the worst aspects of the situation? I quote from his interview that aired in a 2009 episode of National Geographic Channel’s Locked Up Abroad:

This was our sixth night with no sleep. In the Staff Officer’s Handbook, they tell you that, after 96 hours without sleep, a soldier is effectively useless. We’d gone almost double that period. There was this big African lady in a white shawl who was along by our side, and I had no idea what she was doing there, and I knew it was a hallucination … but it didn’t make it go away.

Ignoring the fact that Ashby’s survival of such an ordeal betrays him as not a mere man but a wayward Terminator lost in time whose battery hasn’t died yet, it forwards an important question: When does sleep deprivation go from a mere annoyance to actual impairment, and how person-specific is its impact?

By some circumstance or another, most American adults have been forced to operate without sleep for at least 24 hours. Some adults, particularly those who have served in this nation’s armed forces, have had to function for many more hours than that, and I’m not even taking things like combat deployments, Ranger School, disco veterans or over-the-road trucking into account.

In fact, these kinds of situations are not rare. Next time you’re in a hospital or emergency room, understand that caffeine and a natural disinclination to admit defeat are the two substances keeping most of the staff upright. Any responsible parent knows the reality of everything still having to get done regardless of how little sleep he or she has had over the past few days (or years). So it’s not that sleep deprivation is anything new to most Americans, let alone most Americans who read this magazine.

However, what used to be considered nothing more than hazing or training for the realities of combat is beginning to be understood as a greater threat than initially thought. In study after study, physicians have proven over and over that a sleep-deprived person suffers the same motor-reflex impairment as a similar person who is intoxicated on alcohol to the point that it would be illegal for him or her to operate a motor vehicle. In fact, sleep deprivation is a serious enough consideration for concealed carriers that if you even suspect you might be too tired to make decisions and react to stimuli as you normally would, it’s probably time to ground that sidearm and figure out where you can get some shut-eye.

A lack of sleep is one consideration, but it isn’t the end of the sleep concerns. One instructor for whom I have great respect shocked his class when he revealed that he does not actually keep a loaded sidearm in his home unless it’s physically attached to him. When he was asked why, his answer was embarrassingly concise and caused no small number of reassessments among his students:

Well, I carry whenever I’m not going to bed, and when I am, I keep a dry [completely empty] Glock with a loaded magazine next to it in my nightstand. It’s there if I need it, and the time it will take me to insert that magazine and charge that weapon will allow me to get awake enough to be certain I know what I’m doing and not take the wrong shot on the wrong person.

He was acknowledging what many in the firearms training world are loathe to admit: Doesn’t matter if you never even touch an alcohol prep pad while giving blood; there’s a significant chance you could find yourself impaired at the moment you need to use your firearm in defense of self or family.

If you’re up for a little physicality, try this tomorrow morning: As soon as you wake up, jump out of bed, run to the bathroom and change the roll of toilet paper. You’ve probably changed out a roll of toilet paper thousands of times, but the chances of you being adept at it within two seconds of waking up are pretty low.

Understand and internalize the fact that the instant you’re roused out of REM sleep isn’t necessarily the best time to be holding a loaded gun. There isn’t any real way around this. All you can do is understand that it’s something you’re going to have to factor into your reactions to alarms in the night. Worse yet, if you work nights and are at home sleeping during the day, you are statistically far more likely to have to mitigate a deadly threat when roused from slumber than those who do their sleeping at night. Most burglars prefer to burgle during the day while almost everyone is at work, and bungled burglaries have a nasty habit of going sideways very quickly.

There are a few basic steps you can take to better your chances of successfully responding to a late-night emergency in your home. If you remember that you will not, by any means, be as sharp and action-ready as you normally are in the few seconds immediately after you wake up, these several reminders will keep you and yours as safe as possible.

IF YOU NEED CONTACTS, YOU NEED GLASSES

I am fortunate enough not to have to wear either, but it still surprises me that some Americans think they can ditch corrective glasses altogether in favor of contact lenses. If you have to wear contacts to be able to see past your nose, and if you take those contacts out when you go to sleep, you need to have something you can don at a moment’s notice in case of emergency. Some of you may be snickering right now, but I’ve met more than a few folks, generally younger than 30, who consider eyeglasses to back up their contacts an unnecessary expense. Never be that foolish.

THE SANDMAN IS NOT YOUR FRIEND

If you intend to announce that you’re armed and that an intruder needs to get the heck out of your house, that’s your call. What I would ask is that you not do so until you are 100 percent, by which I mean you’re not going to issue a verbal warning (if you’re into that sort of thing) until you are prepared to defend yourself. If you issue a verbal warning and the invader responds by charging the direction from which he heard sound, fight’s on — and that isn’t the time to still be rubbing sleep out of your eyes.

Several issues back, I responded to a letter from a reader who asked about my feelings surrounding weapon-mounted lights.

You need a hand-held flashlight and, if possible, a weapon-mounted light. All kinds of shenanigans happen during deadly force incidents, from hand fights to panicked reactions. If something causes you to drop your hand-held flashlight, it’s awfully nice to have another light attached right to the frame of your pistol. It is always imperative that you never shoot anyone or anything that doesn’t need to get shot, especially in your own residence.

There isn’t any question that training in the dark is the most-neglected skill set in defensive handgunning, and I’d be willing to bet that basically no one (outside of a military context) has ever trained in shooting within seconds of waking up. Since there isn’t any practical way for most private citizens to do so, all we can do is acknowledge that we’re not going to be at our absolute best the moment we wake up and then work forward from there. Like so many other challenges, the first step toward overcoming it is admitting that it exists in the first place.

Next post: Missouri Considers Banning all Federal Gun Control Laws within the State