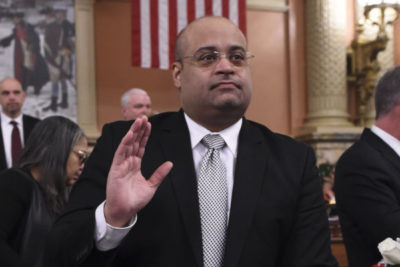 A bill making its way through the Pennsylvania General Assembly would require gun owners to register their firearms, notify the state police of any firearms transfer, and impose a yearly fee to renew a valid firearms registration card.

The bill, HB768, was introduced last week and has been referred to the Republican-controlled House Judiciary Committee. The Firearms Registration Act would force anyone who controls, transfers, offers for sale, sells, gives, delivers or accepts a firearm to obtain a “registration certificate” and renew that certificate for each firearm on an annual basis for a fee of $10 per firearm.

The bill also requires the Pennsylvania State Police to keep a permanent, updated record of all firearms registered in the state.

“I think the act as it is proposed is quite dangerous,” Alan Bernardi, a firearms instructor for the Harrisburg Hunters and Anglers Sports Club, told local media. “It leads to total gun confiscation. “In my opinion, it serves no good purpose. It accomplishes absolutely nothing.”

“How does it make you feel safer? Because you know who has a gun?,” Bernardi continued. “That doesn’t mean anything because the criminal, the violent person, isn’t going to comply with the law anyways.”

In order to obtain a registration certificate, applicants must provide their name, home and business address, telephone number, date of birth, Social Security number, age, sex and citizenship, along with two photographs taken within 30 days immediately prior to the date of filing the application showing the full face, head and shoulders of the applicant in a “clear and distinguishing manner.”

In addition, the applicant must provide the name of the manufacturer, the caliber or gauge, model, type and serial number of each firearm to be registered.

Finally, each applicant must submit fingerprinting to the Pennsylvania State Police and pass a criminal background check.

The bill would add to the list of Americans prohibited from owning a firearm by disqualifying anyone who has been convicted of any violent crime (as opposed to just felonies) and anyone convicted in the previous five years of a crime related to the “use, possession or sale of a narcotic or dangerous drug.”

Any registration certificate holder must notify the State Police within 48 hours if the registered firearm has been stolen, lost, destroyed, sold or transferred.

The new law also sneaks in a safe storage requirement by forcing registered gun owners to keep their firearms “unloaded and disassembled or bound by a trigger lock, gun safe or similar device” unless in the owner’s immediate possession.

Anyone who violates the registration requirement would be charged with a “summary offense,” which is the most minor type of criminal offense in Pennsylvania and usually comes with a fine but could result in up to 90 days in jail.

Republicans control both the House and the Senate in the Pennsylvania General Assembly.

Next post: DIY: Convert Your A2 Gas Block to a Low Profile Gas Block