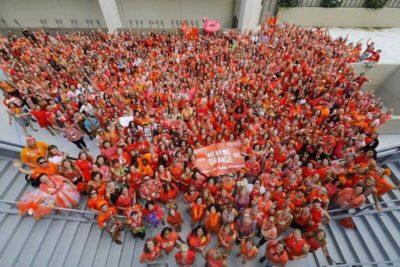 The Florida Legislature voted to arm teachers as part of an existing school safety plan — and anti-gunners this week are urging Gov. Ron DeSantis to veto the bill.

Known as SB 7030, the bill would augment the voluntary Guardian Program passed in the wake of the mass killing at the Marjory Stoneman Douglas High School in Parkland, Florida.

Under the current Guardian Program, school staffers, coaches and other personnel whose primary job doesn’t involve teaching are allowed to bear arms during school hours provided they undergo extensive training (144 hours in total), pass a psychiatric evaluation and clear a drug screening.

SB 7030 gives the same option to full-time teachers, which anti-gunners argue is a “risky” proposition.

“Armed teachers have no place in our kids’ classrooms,” said Gay Valimont, a volunteer leader with the Florida chapter of Moms Demand Action for Gun Sense in America, in a press release obtained by GunsAmerica.

“The risks of arming teachers are well documented, as is the research indicating there are much better ways to keep our kids safe in school, Valimont continued.  “We implore Gov. DeSantis to listen to Floridians and veto this risky bill. We will remember which lawmakers stand on the side of public safety at this critical time.”

Proponents say that expanding the program to include teachers creates a last line of defense against a would-be attacker.

“It allows the good guys to stop the bad. The bad guys will never know when the good guys are there to shoot back,” Rep. Chuck Brannan (Lake City), a retired law enforcement officer, told Time Magazine. “The guardian is the last line of defense. He or she will be there when a police officer is not.”

Anti-gun student activists oppose the measure.  Volunteer Jovanna Liuzzo, with the Florida chapter of Students Demand Action for Gun Sense in America, said Wednesday upon learning that SB 7030 cleared the House, “Students across Florida sent a clear message to Tallahassee: We don’t want our teachers to be armed.”

“We are frustrated and angry that members of the House ignored that message today, and as we register to vote we won’t soon forget that they turned their backs on us,” Liuzzo added. “We call on Gov. DeSantis to veto this bill.”

All signs suggest that Gov. DeSantis, a Republican, will put pen to paper and enact SB 7030.  Critics of the bill should not be too concerned, however.  The Guardian Program is optional.  School districts are not required to participate.

In other words, those who believe that gun-free zones are the best way to stop mass murderers from killing innocent school children are free to continue to test that theory.  Sane folks, meanwhile, can adopt a strategy of armed resistance that is time-tested and utilized, ironically, by the very same people who are leading the charge to disarm the country — anti-gun politicians.

Feinstein and Schumer and Obama, et al., believe they need good guys with guns to ensure their safety.  But when it comes to the safety of school children, they believe a sign on the wall that reads, “No Guns Allowed,” is good enough.  Funny how that works.