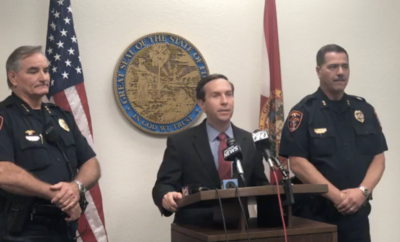 The Florida official who fatally shot an alleged shoplifter earlier this month is being charged with second-degree murder after being indicted by a Polk County Grand Jury.

State Attorney Brian Haas said at a press conference Friday that 47-year-old Michael Dunn’s use of deadly force against Christobal Lopez, 50, falls “outside the protection” of Florida’s stand-your-ground law, which allows one to use force, including deadly force, without a duty to retreat if one reasonably fears imminent death or great bodily harm.

Surveillance footage released last week shows Dunn confronting Lopez as he makes for the exit of the Lakeland city commissioner’s military surplus store on Oct. 3. Dunn grabs Lopez by the shirt as he tries to leave with the $16 hatchet he was suspected of stealing. Seconds later, Dunn fires two shots, killing Lopez.

An Attorney for the Lopez family told Channel 9 that they were “pleased” with the grand jury’s decision to indict Mr. Dunn.

“There is no way to undo the life-shattering harm that Mr. Dunn caused, but we are pleased with the grand jury’s decision for such an unnecessary and egregious use of deadly force,” said the attorney.

“We want to thank the State Attorney’s Office and the Lakeland Police Department for their swift and thorough investigation. We are hopeful that through both this criminal proceeding and the civil suit we plan to file, Mr. Dunn will be held fully accountable for the senseless killing of Christobal Lopez,” continued the statement.

Meanwhile, an attorney for Dunn said that the video footage doesn’t tell the whole story and that his client was acting in self-defense.

“We will offer evidence in this case that (Dunn) was confronted by an armed shoplifter with an ax,” Rusty Franklin told the Ledger. “It was in his hand. A video only shows 10 seconds of what happened. There were other witnesses in the store. I don’t know what they said to the grand jury or to the police, but I have conducted interviews of them and they believe that Michael was acting in self-defense.”

If convicted of second-degree murder Dunn could spend the rest of his life in prison. Dunn is being held in Polk County jail without bond.

Well, what do you think?  Will Dunn be found guilty of 2nd-degree murder?  Or is there room to make a credible case of lawful self-defense?