The SCAR 20S is overbuilt and made for accuracy. It weighs a little extra at just over 11 pounds, but it’s also a hard-use rifle with a 1 MOA accuracy guarantee. (Photo: FN)

FN America is releasing a commercial variant of their Mk 20 called the FN SCAR 20S. Originally developed for military use, the 20S is a precision rifle with a 1 MOA accuracy guarantee at 100 yards with premium ammo.

“The FN SCAR 20S is the latest addition to our battle-proven line-up of FN SCAR products and the first commercial SCAR release since we launched the 17S in 2010,” said FN CEO and president Mark Cherpes. “Customers will notice that the FN SCAR 20S shares more commonalities than differences with the Mk 20 SSR and reaffirms our commitment to producing commercial versions of our iconic military firearms.”

Like the Mk 20 SSR – Sniper Support Rifle – which is in use with the U.S. SOCOM today, the 20S is chambered for 7.62x51mm NATO. It was purpose-built for accuracy at longer ranges, without sacrificing any of the reliability of its short-stroke piston system.

The Mk 20S has an extended 20-inch-long barrel and elongated handguard. The barrel has a 1-in-12 twist. The rifle achieves much of its accuracy thanks to its heavy-profile barrel, barrel extension and monolithic receiver. The extended receiver allows for more flexibility with optics and enables users to add forward-mounted accessories in front of the scope without modification.

One of the biggest differences between the SCAR 20S and the other SCAR rifles is the new style of stock. The new stock is more appropriate for a precision rifle and can be adjusted for length of pull and comb height.

Also, every Mk 20S comes with a Geissele Super SCAR trigger factory-installed. The match trigger has a 3.5-4.5-pound trigger pull. The guns are shipping with 10-round magazines but are of course compatible with 20-round SCAR mags. Flat dark earth is the color option for now.

See Also: FN SCAR Review – The Most Refined Fighting Rifle in the World 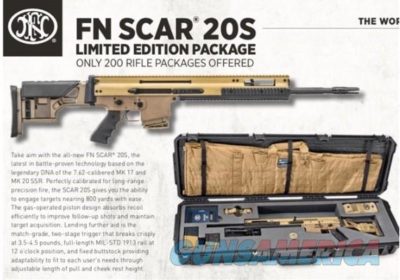 If you feel like you have a SCAR 20S hole in your heart don’t wait because these will completely sell out, and sooner than you think. FN is also releasing a limited edition of 200 “Sealed in the Factory” collector’s rifles.

The collector’s rifles come in a custom SKB hard carry case that includes FirstSPear R37 Rifle Wrap Soft Case and shooting mat, an FN SCAR 20S Field Kit with cleaning supplies and SCAR tools, a limited-edition patch, a limited-edition coin and a coupon for a free copy of the ARS Mechanica Ultimate FN Book, in addition to the rifle. The rifle also comes with one 10-round and one 20-round magazine and Harris bipod.

If you’re interested in either of these get ready for a little sticker shock. The standard 20S runs around $4,499 while the limited edition is a cool $6,999. Even at these prices FN will have less trouble selling ’em than buyers will have finding ’em, so act fast!

Next post: Jon Stewart on Buying ARs: ‘It’s Harder to Adopt a Cat’