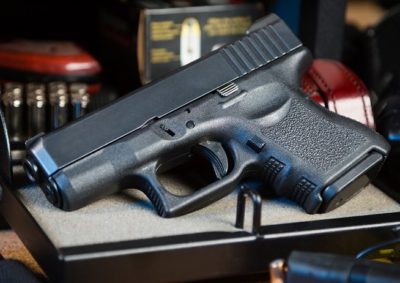 Constitutional Carry allows one to bear arms in the manner the founders intended. No permit, fees or background checks required. (Photo: NRA-ILA)

Georgians may soon be able to carry a concealed firearm in public without a permit.

Under the status quo, residents must pay a fee of around $75, register with Big Brother and pass a background check before they are given a license that allows them to bear concealed arms.

Rep. Gurtler believes that this Shall-Issue process flies in the face of the Second Amendment.

“As it stands now, law-abiding Georgians are taxed millions of dollars annually for exercising their God-given natural rights of self-defense,” Gurtler said, as reported by The AJC. “Under the (U.S) Constitution and in accordance with our Founding Fathers, ‘shall not be infringed’ is a no-compromise statement.”

While HB2 faces an uphill battle in the Legislature, it does have the backing of governor-elect Brian Kemp, a Republican.

“I’m just really thrilled that we actually have a governor that has gotten behind constitutional carry,” said Gutler in an interview with 11Alive News.

“I don’t believe it’s radical at all. I think it’s conservative. It’s constitutional,” Gurtler continued. “In the constitution it says (the right to keep and bear arms) ‘shall not be infringed.’ We believe that’s a no-compromise statement.”

SEE ALSO: Why Do Alabama Sheriffs Oppose Constitutional Carry? It’s All About the Money!

The permitting system wouldn’t be completely upended if HB2 were to become law. Permits would still be available for those who wanted to carry outside the state where Georgia has reciprocity agreements in place.

It also wouldn’t change the law on who can lawfully carry firearms. felons, minors, mental defectives, among other prohibited persons, would still be prohibited from possessing firearms let alone bearing them.

11Alive News ran a poll in the Spring, presumably after the shooting in Parkland, Florida, that found most Georgians preferred stricter gun laws. According to the poll results:

“The polling data, the constituencies, the voting does not support more guns, more days, more places for any purpose. That is not what the will of Georgia is,” said Rep. Oliver, who represents Decatur.

Gurtler filed a Constitutional Carry bill last year. It was ultimately sidelined. Maybe this go-around things will be different and Georgia will join the 13 states that have enacted permitless carry.

Next post: Tulsa Homeowner on Dead Intruder: ‘He brought this on himself. I have no sympathy’