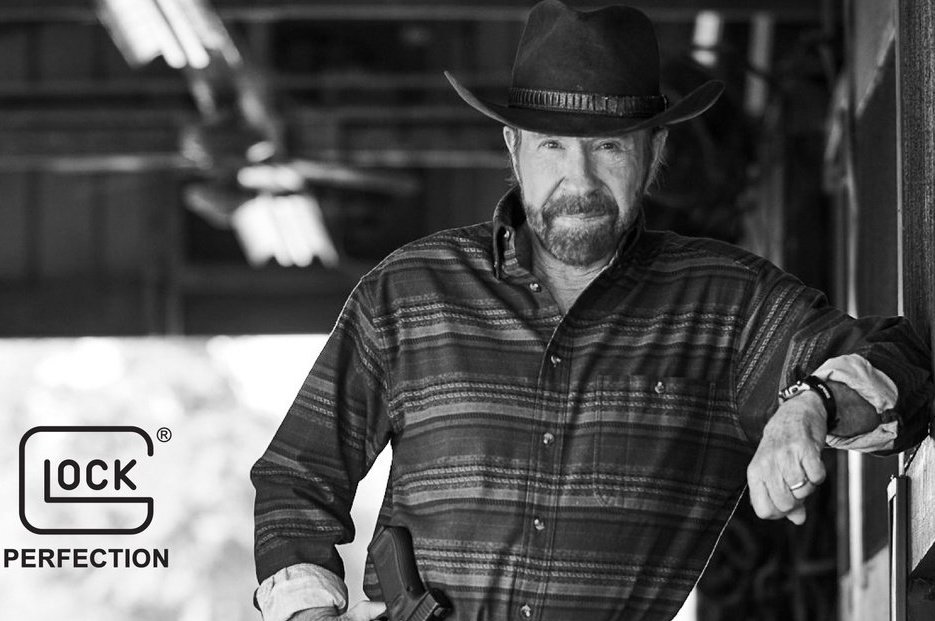 Chuck Norris, an all-American badass, is now a spokesperson for Glock. (Photo: Glock)

The king of the polymer pistol has a new celebrity spokesperson!  Carlos Ray Norris.  Better known as Chuck Norris.  Maybe you’ve heard of him?

“Having him represent the GLOCK brand brings two iconic names together that are mutually committed to perfection and their fan base,” continued Dorsey. “We couldn’t be more excited about this partnership.”

With the passing of R. Lee Ermey aka “Gunny” in April of 2018, Glock was no doubt looking for someone to fill the role of public ambassador for the brand.  The problem is how do you replace a legend like Gunny?  You don’t, I guess is the answer.

Instead, you have to find someone who will proudly continue the legacy of what was started. And, I ask you, who better to carry that torch than Chuck Norris?

“I’m honored to partner with this world-renowned brand,” said Norris. “The values that I have built my life and brand on—tough, real, constant and powerful—are echoed in everything that GLOCK does and creates.”

“Let me put it this way, if I ever decided to go into firearms, there would be no point—I would just be recreating what GLOCK has already built,” he added. “The only thing that would change is the name.”

Norris will be making his first public appearance as a Glock spokesperson during the 2019 NRA Annual Meetings & Exhibits in Indianapolis later this month, April 26-27, 2019.  We’ll be there.  Hopefully, we get a chance to meet this Hollywood icon.

Next post: JAMMED: How An Adversary Can Cause a Failure