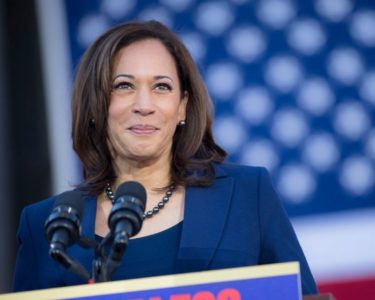 Democratic presidential hopeful Kamala Harris told a crowd at a CNN town hall on Monday that, if elected, she plans to use executive action to implement near-universal background checks, revoke the licenses of firearms dealers who break the law, close the so-called “boyfriend loophole,” and prohibit people with arrest warrants from buying guns.

“There are people in Washington, D.C., supposed leaders, who have failed to have the courage to reject a false choice which suggests you’re either in favor of the Second Amendment or you want to take everyone’s guns away,” Harris said.

“Upon being elected, I will give the United States Congress 100 days to get their act together and have the courage to pass reasonable gun safety laws, and if they fail to do it, then I will take executive action.”

Harris’s background check policy is among her most detailed to date. She wants to use her executive powers to force anyone who sells more than five firearms per year to conduct background checks on all future gun sales.

“Millions of guns are sold each year with no questions asked in the 30 states without universal background checks,” according to a copy of Harris’s proposal. “This is how dangerous people buy guns: about 80% of all firearms acquired for criminal purposes are bought through unlicensed sellers.”

Harris’s plan also promises to take executive action against firearms manufacturers and dealers that break the law. She claims that the Protection of Commerce in Arms Act (PLCAA) “prevents victims of gun violence from holding law-breaking gun manufacturers and dealers accountable,” and she vows to act if Congress does not repeal the PLCAA within the first 100 days of her presidency.

The PLCAA is often targeted by anti-gun politicians, but the facts don’t back up Harris’s claims. The PLCAA doesn’t protect members of the gun industry from product liability suits for manufacturing or design defects, or certain types of negligent conduct. It merely prohibits lawsuits against gun makers for damages resulting from the third-party criminal misuse of their firearms.

This isn’t the first time Harris has used a CNN town hall to make incendiary anti-gun comments. At another event in January, she said that congresspeople should be forced to look at images of the children killed in the 2012 Sandy Hook massacre.

“I think somebody should have required all those members of Congress to go in a room, in a locked room, no press, no one, nobody else, and look at the autopsy photographs of those babies,” Harris said at the time. “And then you can vote your conscience. This has become a political issue.”

Harris consistently ranks third in national polling behind Bernie Sanders and Joe Biden. But while Biden and Sanders consistently garner over 20 percent of the vote, Harris has yet to break double digits.

Previous post: Giddyup! Ruger’s Made A New Cowboy Revolver (Only $249!)