Harvard Student Gets the Boot Over Legally Owned, Stored Firearms 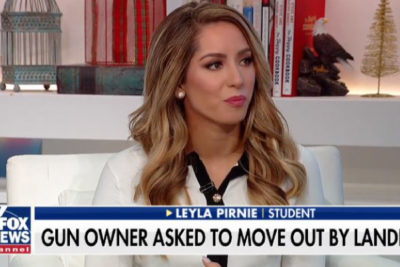 Leyla Pirnie is being asked to move out because her roommates feel “uncomfortable” with guns in the house. (Photo: Screenshot Fox News)

A graduate student at Harvard University is being forced out of her apartment because her roommates feel “uncomfortable” about her legally owned and stored firearms, according to a new report from the Washington Free Beacon.

Leyla Pirnie, 24, believes her political beliefs and her background motivated her roommates’ actions. They searched her room while she was away on a weekend trip, and, when they claim they found her firearms, they sent their landlord an email requesting that she move.

“When I asked them why they were in my room to begin with, they each came up with completely contradicting stories (none of which made any sense), but one comment struck me in particular: ‘We saw that you had a MAGA hat and come on, you’re from Alabama… so we just kind of assumed that you had something,’” she said. “I asked why they didn’t just call me and ask me before intruding. One of the girls responded that fear took over her body and she felt compelled to search my room until she found proof… I cannot make this up.”

SEE ALSO: Twitterverse Explodes After College Senior Poses with Gun in Her Waistband

The Free Beacon obtained the email that Pirnie’s roommate sent to their landlord, Dave Lewis.

“All of us are uncomfortable having the firearms in the house, and… their presence causes anxiety and deprives us of the quiet enjoyment of the premises to which we are entitled,” the email says. “Please take appropriate steps to confirm the firearms are being maintained legally, and that they were locked and kept in a secure container.”

Lewis asked Captain James Donovan of the Somerville Police Department to inspect Pirnie’s firearms and their method of storage. According to another email from Lewis, Donovan determined the firearms are being “safely and legally stored” and that Pirnie is in compliance with all state laws. Massachusetts has the nation’s strictest safe storage laws, requiring that all firearms be kept under lock and key when not in use.

Despite Donovan’s findings, Lewis and Pirnie’s roommate still want her to leave.

“Since it’s clear that Leyla wants to keep her firearms, it would be best for all parties if she finds another place to live,” Lewis says. “I’m truly sorry that this has occurred but i (sic) think it’s a (sic) important to remember that we are all human beings and we need to try to respect one another, irrespective of one’s beliefs and lifestyle choices.”

Those choices, apparently, do not include firearm ownership.

“What I find uncomfortable is coming home to find out that six people I barely know went into my bedroom without permission and went through every single one of my drawers, without any regard to my privacy whatsoever,” Pirnie said. “My landlord’s e-mail, though carefully crafted, showed tremendous prejudice against my right to legally have firearms.”