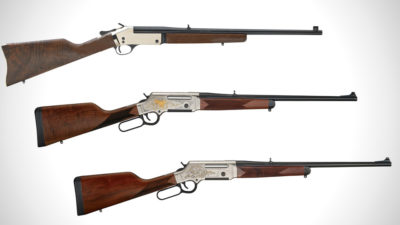 Henry has several new wall hangers that are still plenty effective in the field. (Photo: Henry)

Henry Repeating Arms is adding a flight of new rifles and shotguns that run the gamut from entry-level long guns for youths to high-polish, engraved premium guns. New guns include Deluxe Long Rangers and break-action single-shots.

The company has two new series of the Deluxe Long Ranger, the Engraved Edition and the Wildlife Engraved Edition. Both are available in .223 Remington/5.56 NATO and .243 and .308 Winchester. They have light alloy receivers with a bright nickel plating. They’re engraved with scrollwork and finished with 24 karat gold inlays.

The Wildlife edition features nature and game animal engravings. It is also chambered for .223/5.56 and .243 and .308 Win. The .223/5.56 model is coyote-themed with a single coyote face on the left side of the receiver and a pair of coyotes on the right. 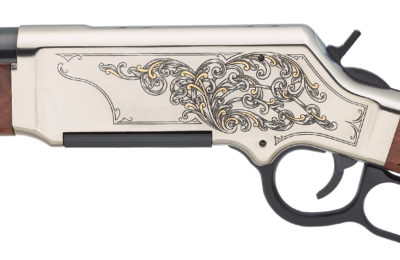 Similarly, the .243 model has a pronghorn head on the left side of the receiver and a full-figured couple on the right. The .308 has bull elk on the left and a grazing pair on the right. Both premium editions command an $1,850 MSRP with lower prices in the real world.

The other new guns all expand on Henry’s single-shot family of rifles and shotguns. Henry is adding new single-shots in .357 Magnum, .30-30 and .243 Win. as well as in 20 gauge. The .243 Win. and 20-gauge long guns are additions to their youth series with compact stocks for shorter lengths of pull.

The .357 Mag. can of course chamber .38 Special as well, making it a great all-around gun for marksmanship practice, plinking and hunting smaller game. Henry offers this model in two versions, one with a blued steel receiver and the other with a hardened brass receiver. The .30-30 Win. model is only available with a steel receiver.

The 20-gauge shotgun and .243 Win. rifle are the first centerfire single-shot youth guns from Henry. Until now, all of Henry’s youth models were chambered for .22 rimfire cartridges. With these two guns young shooters can progress from rimfire guns to centerfire with light-recoiling options to learn different shooting styles without having to switch to a different manual of arms.

These single shots have an approachable $448 MSRP. The brass version of the .357 runs a little more at $576. In-store pricing will vary, but should be less across the board.