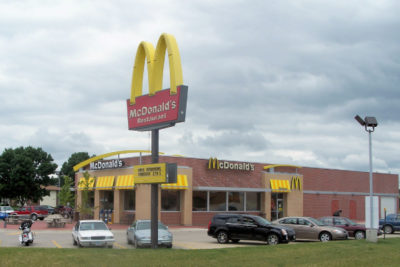 An Alabama man is being hailed as a hero after he used his concealed firearm to stop a masked gunman at a McDonald’s in southwest Birmingham.

The suspect entered the restaurant as it was closing on Saturday night around 10:45pm, according to local media. He gained access by entering just as an employee was unlocking the door for a father and his two sons to leave. The suspect opened fire as soon as he entered, but the father drew his own concealed weapon and returned fire.

“He’s my hero,” Markus Washington, a McDonald’s employee, told WBRC. “Because I can only imagine how it would’ve went if he wasn’t armed. We might not be here having this interview.”

When police arrived they found the father, one of his sons, and the suspect suffering from gunshot wounds. A witness told AL.com that she heard eight or nine shots ring out as she was waiting for her food in the drive-through. She heard two more shots as she watched people running from the restaurant, including children.

Washington, who found cover in one of the restaurant freezers, told a similar story.

“All we hear is like different gunfire, so in my mind, I’m imagining everybody is dead. He’s looking for us,” Washington said.

SEE ALSO: Jews Speak Out on Guns and Pittsburgh

Police say the father and son are both still alive and being treated at a local hospital, according to WBRC. The suspect died from his injuries.

“It’s truly sad, but it’s something as a community we can overcome,” Birmingham police spokesman Sgt. Bryan Shelton told AL.com. “We just have to work together to find a solution to our issues without resorting to violence. Right now it appears the victim made a decision that cost his life and the father made a decision that preserved his and children’s life.”

Police aren’t sure whether the suspect entered the McDonald’s to rob it or to target an employee. Police scanners initially reported the incident as a robbery in progress, but that might not explain the suspect’s decision to open fire immediately.

Washington said he’s grateful for the father’s intervention, but the experience has left him shaken.

“Wrapping my head around it all, I was just wishing someone would come wake me up from this nightmare,” he said.

Police have yet to release the name of the father who stepped in to stop the suspect. According to initial reports, police say they have no plans to charge the father with a crime.

Previous post: Jews Speak Out on Guns and Pittsburgh