As the New Year rings in every Dec 31, most hunters believe that they will have to wait until September to get the opportunity to chase fur and feathers again, as most of the big game seasons have closed and for the most part the only season open is waterfowl. Although waterfowl hunting is a great pursuit, the barriers to entry can be steep with the cost of decoys and equipment. But luckily for most Americans, there is a large game bird that offers quite the challenge, the ringneck pheasant.

Although this introduced species from Asia is not a Native American game animal it has become so much a part of our culture that many Americans view it as such. With long seasons and generous bag limits, they can offer some great late season hunting opportunities.

Most states’ pheasant seasons open up in the latter parts of September or early October and run through the end of January. There are huntable pheasant populations in many states. We have all heard of the famous South Dakota pheasant hunts, but the abundance of pheasants isn’t limited to the Dakotas. Well established populations can be found from coast to coast including California, Utah, Washington, Colorado, Nebraska, Indiana and Pennsylvania just to name a few. A full list of states with hunting seasons and where to start can be found at pheasantsforever.com. 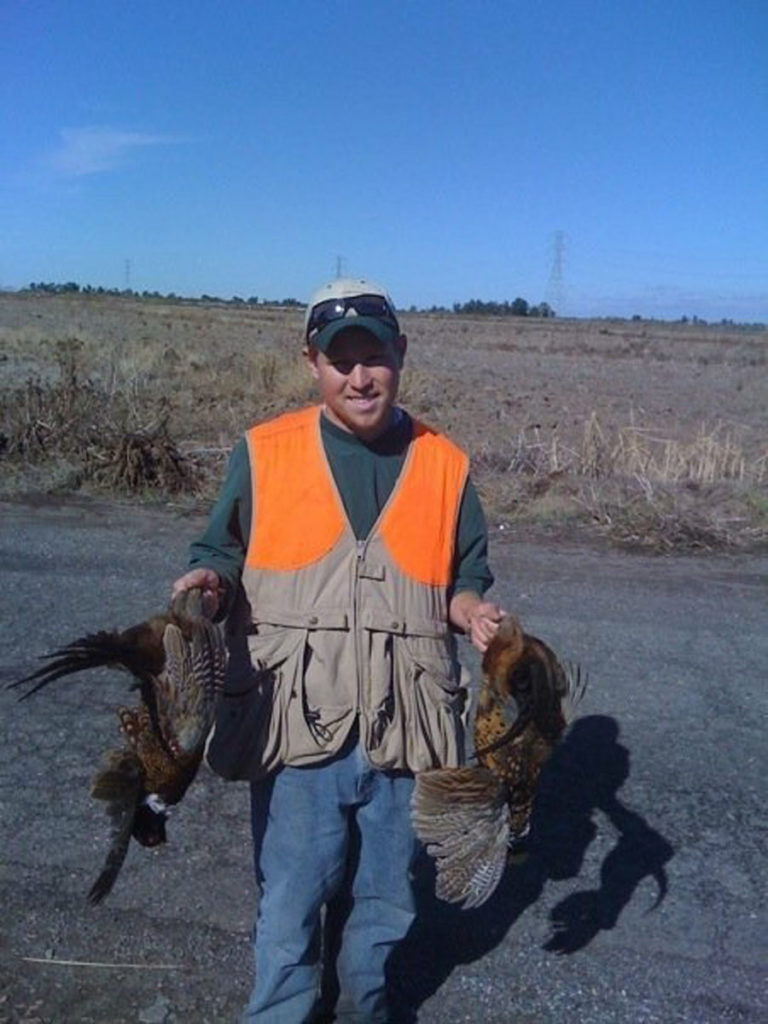 This is a picture of the culmination of a Californian Pheasant hunt which ended with a mixed bag. Hunting pheasants in California often mean hunting in rice fields which can be messy and unproductive. 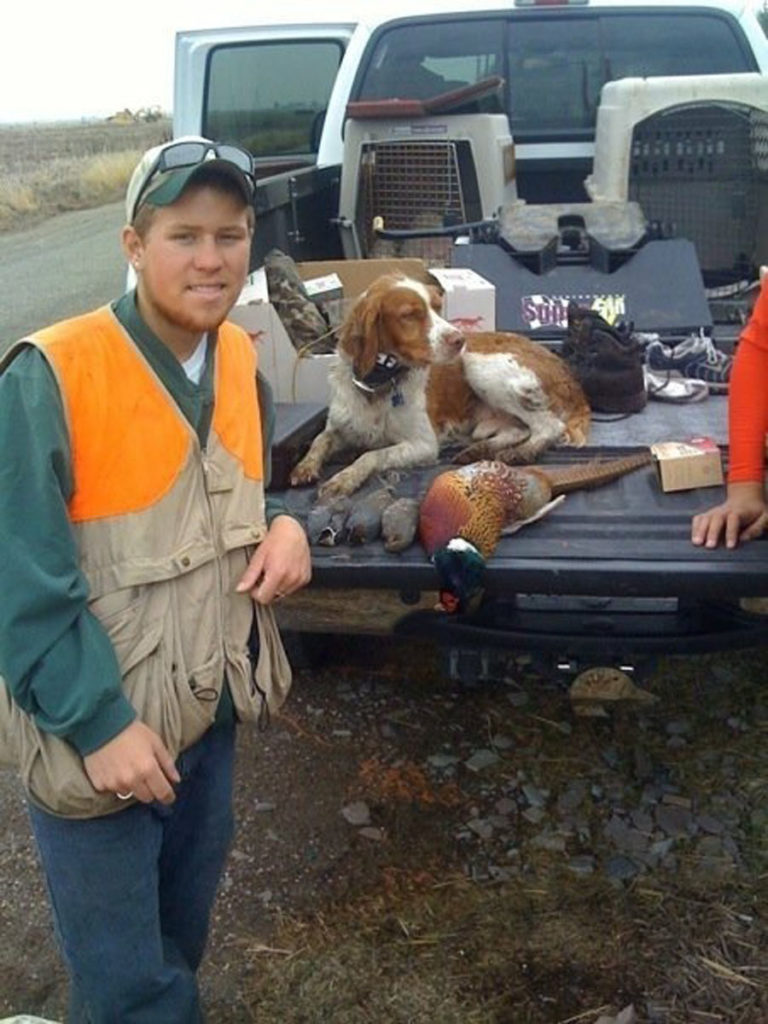 I personally think of pheasants as a “late season” animal. The reason for this is that living in Colorado, September and October are dedicated to chasing bucks and bulls. It is hard to leave the promise of antlers for the thought of feathers. But to be honest the hunting is much more productive in the late season. For the most part, the crops are out of the fields, making finding birds much easier and the majority of weekend warrior hunters are fed up with chasing the birds all season long, so there is less pressure, even on weekends. I have also found it much easier to get permission to hunt on private land. Most farmers are not worried about your truck tearing up their fields or knocking over stalks because the crops are up.

The lack of crops in the field also helps to concentrate the birds. In the early season, there is so much cover and food that the birds are spread out and can be difficult to hunt without a dog. However, when the crops are out of the fields the birds can be concentrated in fence rows and patches of cover between the large muddy plowed up soil. 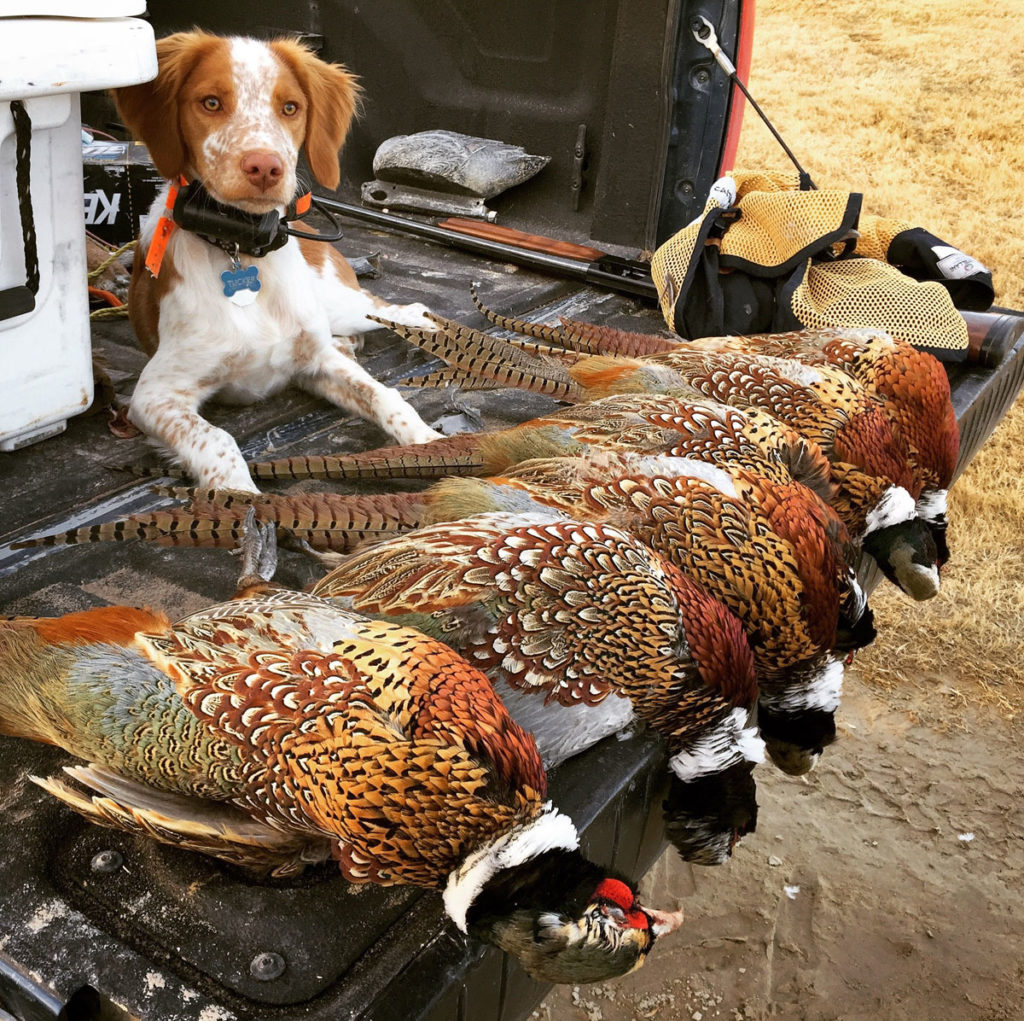 This is a Colorado Pheasant hunt. The extreme eastern plains can be very fruitful to hunt once you find a landowner to give you permission.

Weather can also be much better as the season progresses. Although it is much more comfortable to hunt early in the season when the weather is mild, the birds have a tendency to run much further when the weather is nice. As the season moves into late December and early January, the birds are using more energy to move and stay warm. This makes them much less inclined to run long distances, because of the amount of energy that it costs them. They may not be able to replace with it with the lack of food. As most pheasant hunters know, they have much more propensity to run than fly, but late in the season, they are much more likely to hold tight and flush rather than run. If you can couple cold weather and snow, then you are likely going to have quite a few opportunities to fill your bag limit. 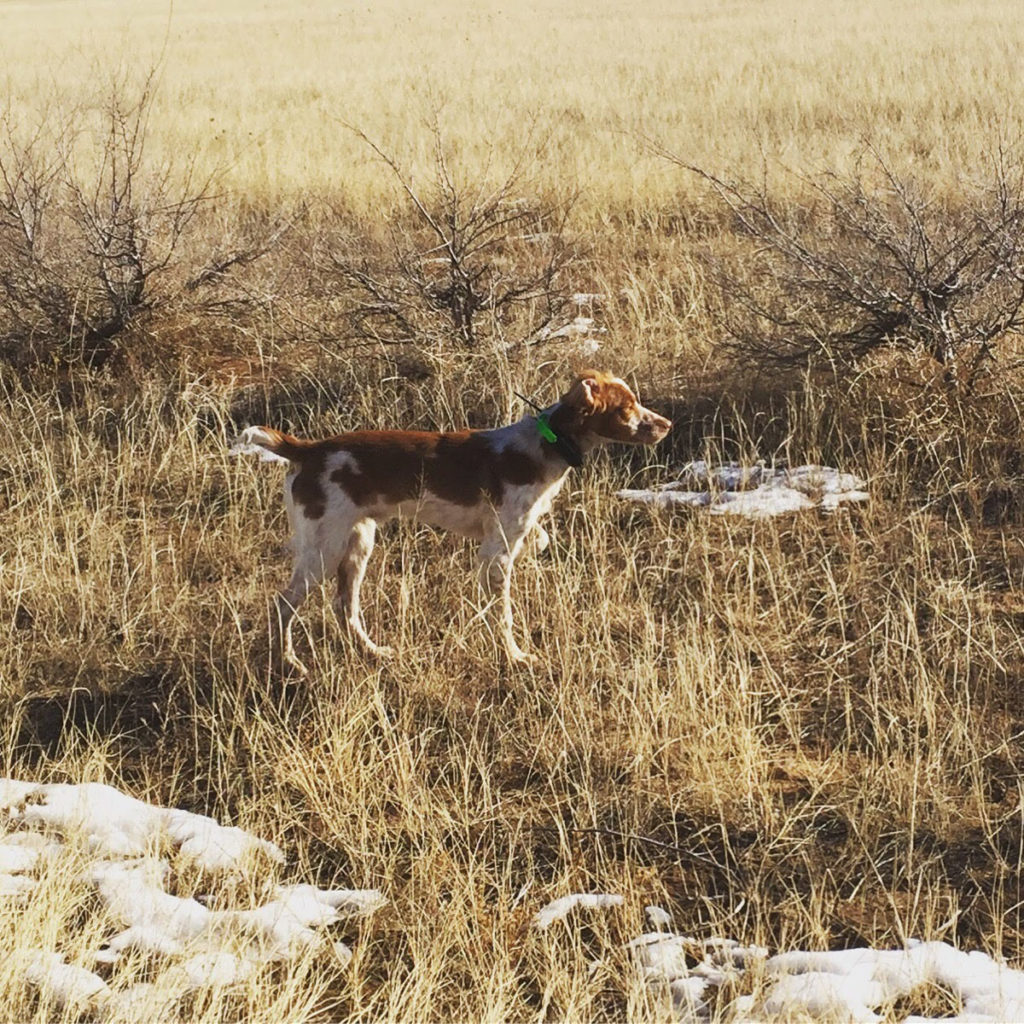 For me, the greatest part about pheasant hunting is the dog work. I usually run Brittany’s. These are two dogs, 10 years apart, but they both know how to hold a bird. 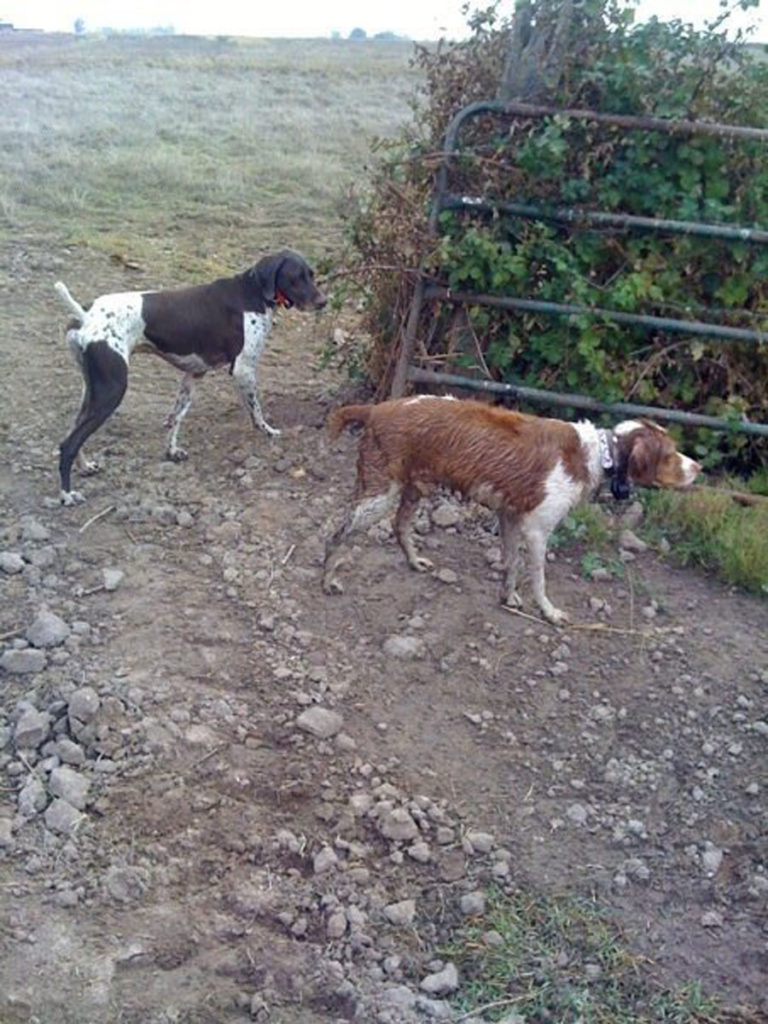 I have a good dog to hunt over, but I know that most hunters don’t have this luxury and many a pheasant hunter has walked endless miles with not so much as a feather to show for it. If you can pay a little attention to the weather you can mitigate the chances of walking miles with nothing to show and potentially have a great shoot. 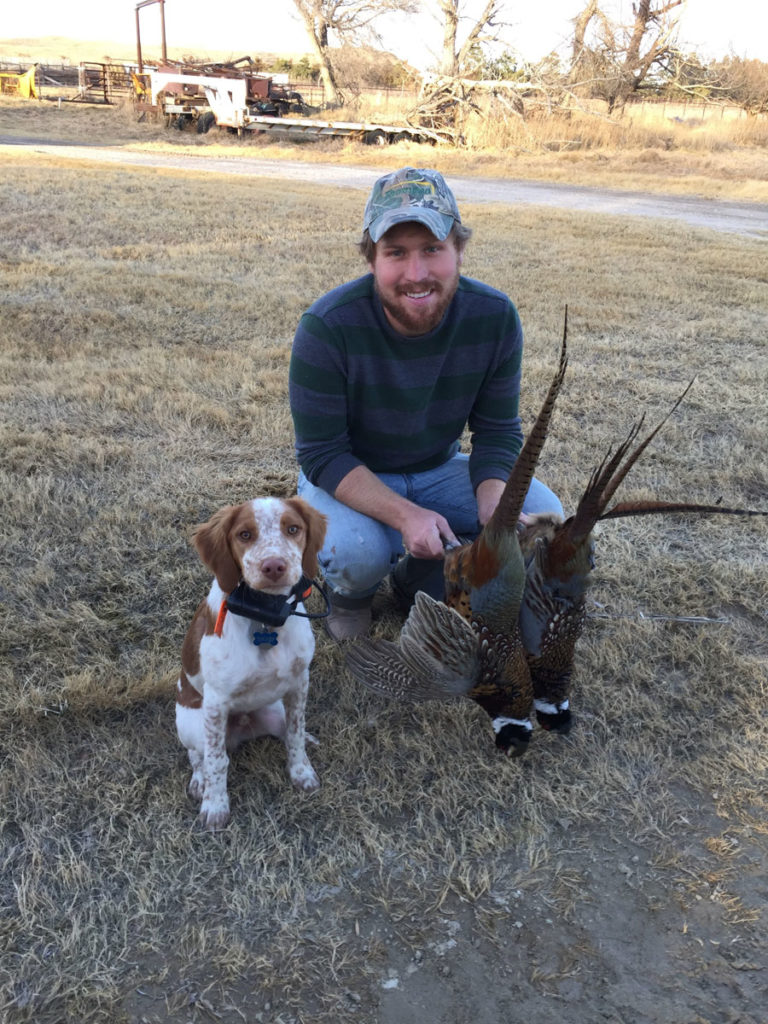 A great state to hunt Pheasant in is Nebraska. The transition areas between crop fields and CRP can offer a great opportunity.

If you find yourself going a little stir crazy in the middle of January, take a look at your local hunting regulations and chances are that the opportunity to get out after some great tasting and challenging birds isn’t too far away. These long seasons offer a great opportunity to grab your shotgun, dog and a few good buddies and get outdoors in the late winter.