Accufit for an Ambush – a Savage Success! 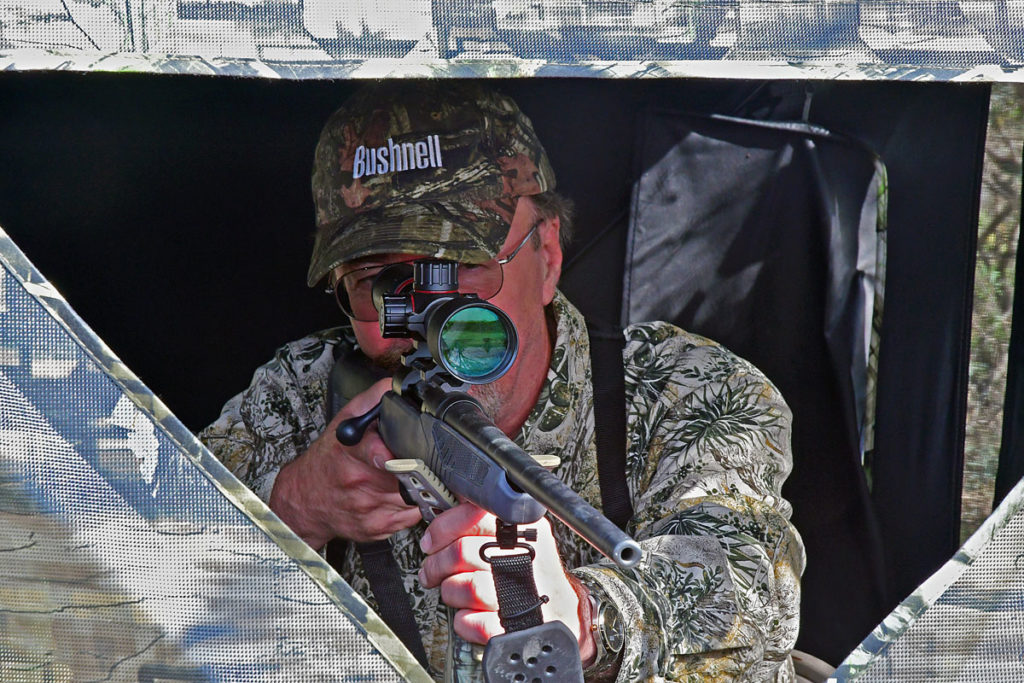 The view from the popup blind, a SurroundView model from Primos, was more entertaining than any big-screen movie. Set up on the edge of a large, open field on the 20,000-acre Canyon Ranch in central Texas, the blind overlooked a marshy area fed by a stock tank that trickled water into the field. The water, along with the lush vegetation it fed, was a magnet for wildlife.

A group of hogs wandered past mere feet away at first light. I held my breath and let them go. I was hunting axis deer, and Canyon Ranch has a well-deserved reputation for producing axis bucks of trophy proportions. I watched some red stag come and go, along with numerous whitetail deer and one sneaky raccoon. I’d been in the blind for an hour when, glancing to my right, I was surprised to see a huge-bodied axis buck materialize, seemingly out of nowhere, at the edge of the field. One quick glance at his headgear was all the convincing I needed. 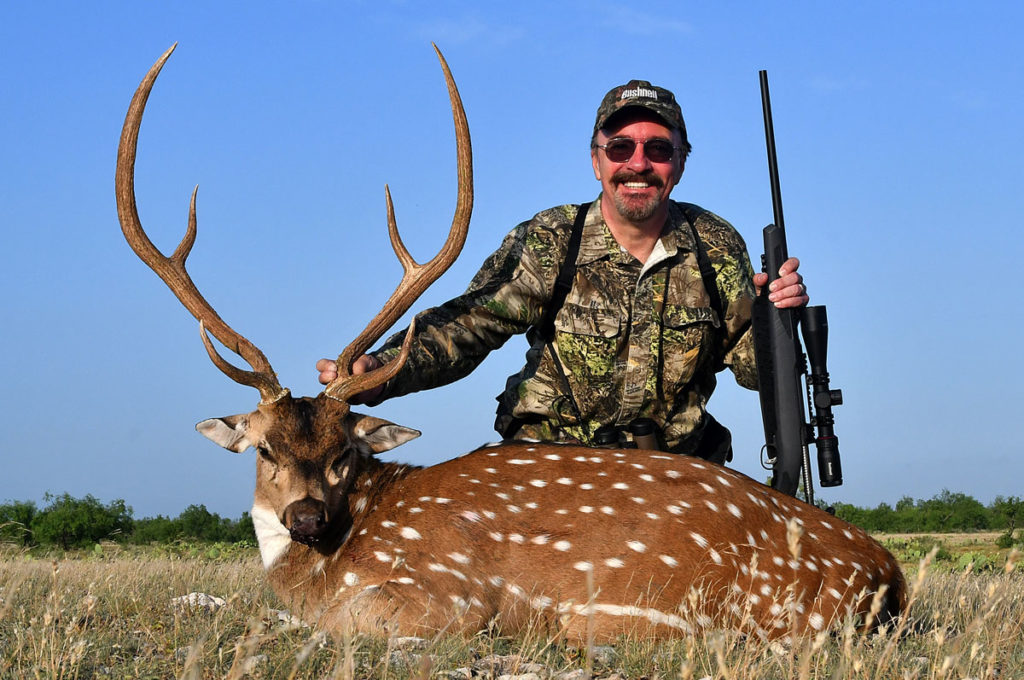 The author collected this big-bodied trophy Axis deer, which had 32-inch main beams, with a 30-06 175-gr. Federal Edge TLR round.

As the big axis buck advanced into the open, I slowly positioned a Savage 110 Hunter Accufit rifle, chambered in 30-06 Springfield, for the shot. My finger tightened on the trigger and I touched off a 175-gr. Federal Edge TLR round, making the beautiful buck, which had 32-inch main beams, mine forever.

The Savage 110 Hunter has been around for some time, but it has never before been offered with the aesthetics and versatility embodied in the new AccuFit version. Most shooters are familiar with the company’s innovative AccuStock and AccuTrigger designs, but the AccuFit stock system turns the 110 Hunter into a rifle that anyone can shoot comfortably. 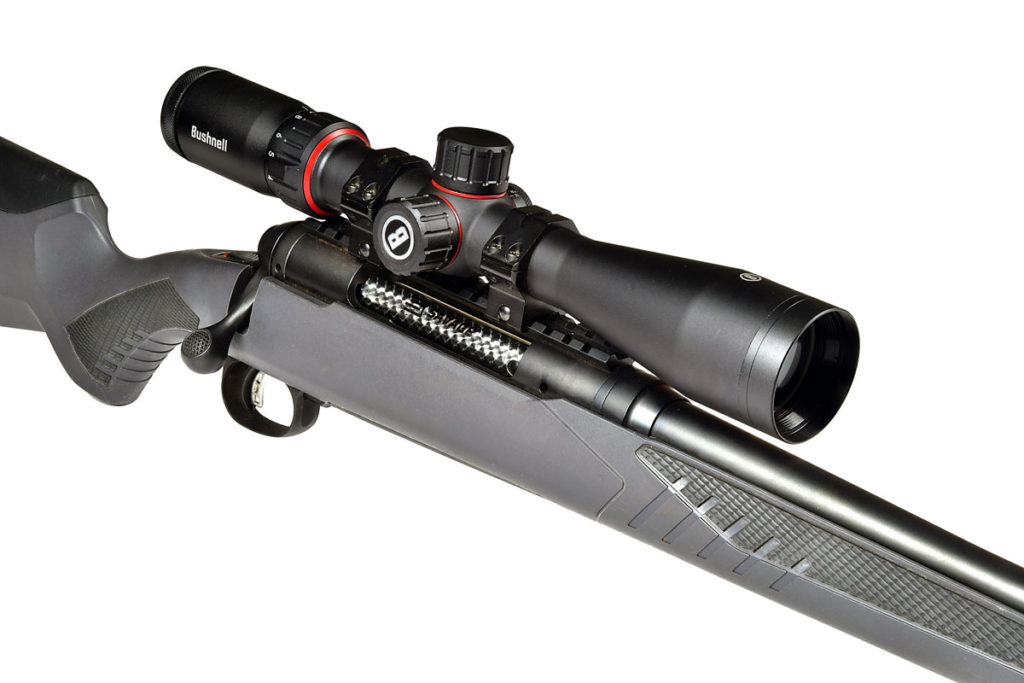 With the AccuFit series, Savage has given the venerable 110 series of rifles a makeover resulting in more modern aesthetics and greater practicality.

The AccuFit system is just one component of a complete makeover of the Savage 110 series of rifles, but it’s one that has the biggest visual and practical impact. The stock gives the 110 a new, fresh and somewhat modern appearance. Sculpted, flowing lines are complemented by the visual contrast between the grey stock and black inserts used to give the shooter a custom-fitting gun.

Included with the rifle are five different risers to adjust comb height, in 1/8-inch increments, and four different inserts to adjust length of pull, from 13 inches to 14 inches, in 1/4-inch increments. All that’s required is a Phillips head screwdriver. The net result is a rifle that provides a tailored fit at an affordable price. It’s a gun that a youngster can grow into, one that more comfortably fits female shooters or one that simply allows a hunter to adjust fit when wearing bulky winter clothing. The stock has soft-grip overmolded fore-end and pistol-grip surfaces, for a solid grip in inclement weather, and a soft rubber buttpad soaks up recoil nicely. 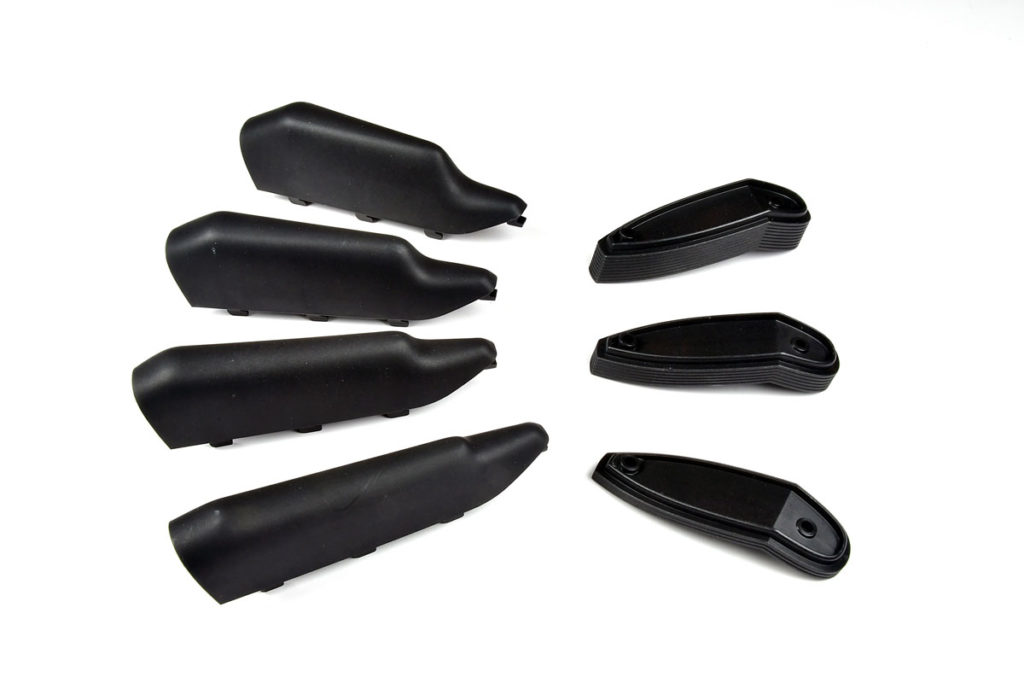 The AccuFit system includes numerous risers and inserts to adjust comb height and length of pull for a custom fit to the shooter.

This new version of the 110 Hunter is relatively light, weighing 7.25 lbs., thanks to the synthetic stock and a sporter-profile 22 in. barrel. The barrel is button-rifled and hand-straightened and has a matte black protective finish.

The gun is equipped with all the standard features shooters have come to expect from Savage, including the much-copied Savage AccuTrigger, which is adjustable down to a pull weight of about 2.5 pounds. As it arrived for my hunt, the trigger on my test rifle broke at an average pull weight of 3 pounds, 5 ounces. It broke so crisply, with no creep, that I left it at the factory setting. You can easily adjust the trigger using the supplied tool that comes with the rifle, but you’ll need to remove the barreled action from the stock first. 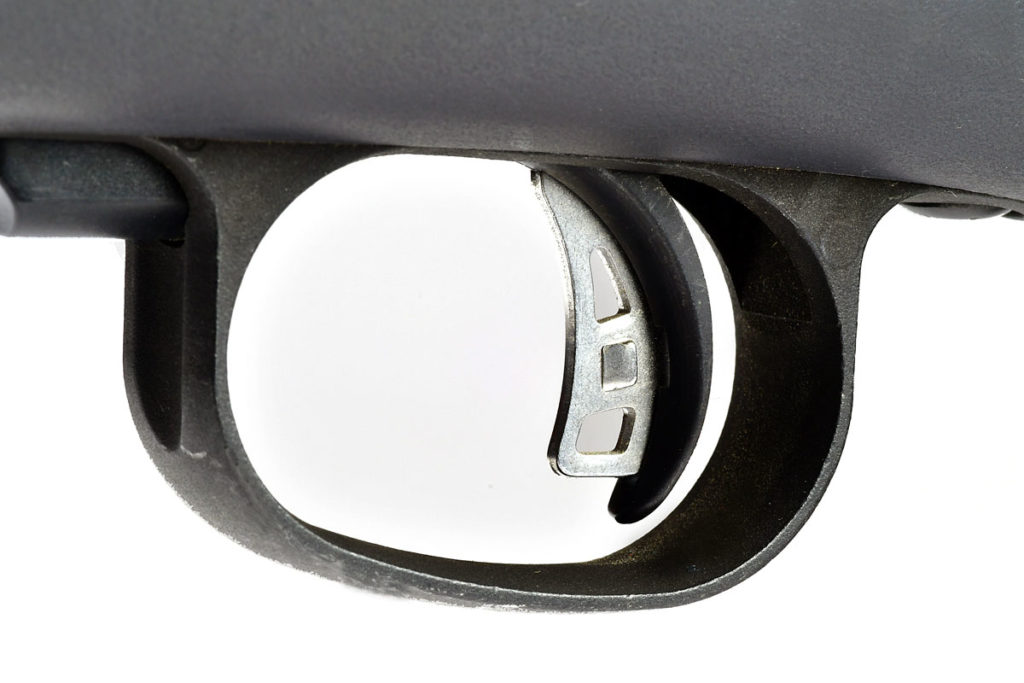 The much-copied Savage AccuTrigger is adjustable down to a pull weight of about 2.5 pounds.

The rifle also utilizes the rigid, aluminum-rail AccuStock bedding system, which engages the action three-dimensionally along its entire length. In addition to ensuring that the action doesn’t shift in the stock, the bedding system adds rigidity to what might otherwise be just another overly flexible polymer stock.

Savage employs a zero-tolerance approach to headspacing by hand-fitting barrels to individual actions, secured with a barrel locknut. Purists have long mocked the appearance of the barrel nut, but this precise headspacing contributes to the solid reputation Savage rifles have earned over the years for good out-of-the-box accuracy. The same applies to the Savage floating bolt head, which self-aligns to a degree. 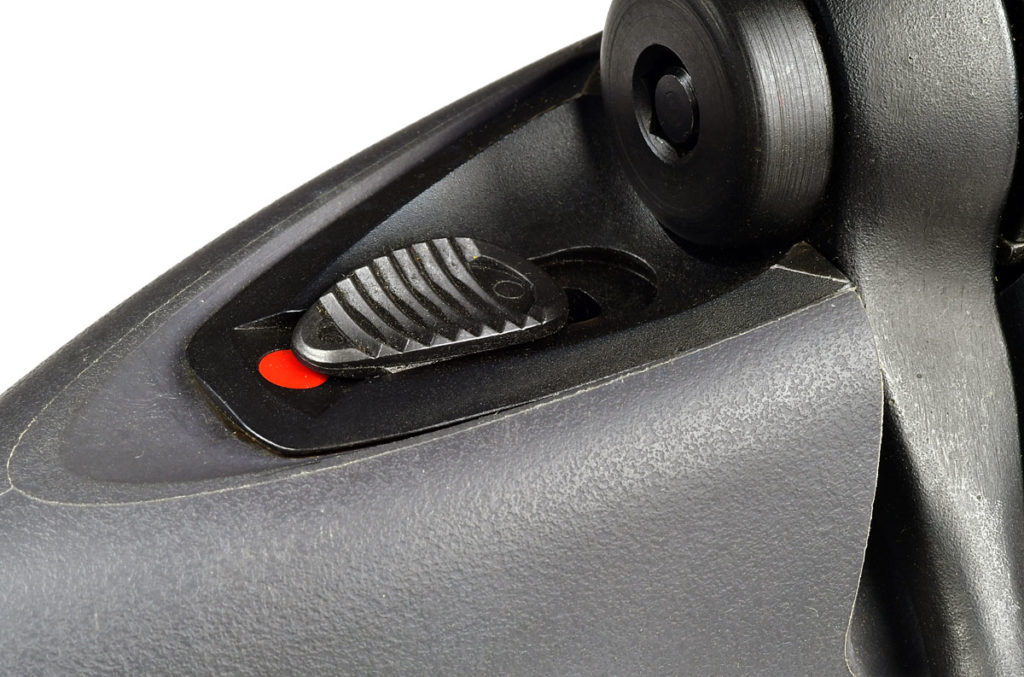 A tang-mounted, three-position safety allows you to cycle the bolt with the safety engaged.

The rifle has a detachable box magazine that is, I’m pleased to report, made of metal. Magazine capacity in the 30-06 rifle I tested is four rounds. That’s true for all but two of the 11 chamberings the rifle is offered in, ranging from 22-250 Rem. to 280 Ackley. Magazine capacity is three rounds for rifles chambered in 7mm-08 and 300 Win. Mag. The magazine clicks into place with authority and pops freely into the hand when you operate the recessed, protected magazine-release lever.

A three-position, tang-mounted safety locks the bolt down in the rearmost position but allows you to operate the bolt with the safety engaged in the middle position. To fire, you simply push the safety all the way forward, and you’ll find that easy to do since the safety is within easy, natural reach of the thumb when the trigger hand is in shooting position. The safety moves through its settings with clicks you can both feel and hear. 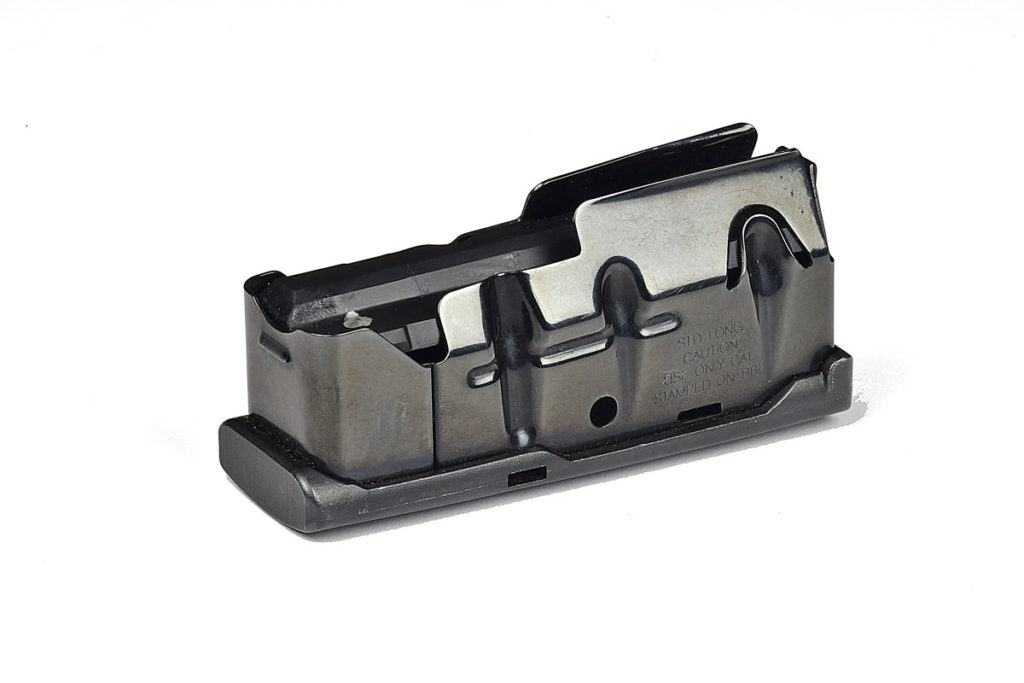 Detachable magazines, made of metal, have a capacity of four rounds in most chamberings.

With a new 30 mm Bushnell Nitro 4-10X44 scope mounted, I found that the rifle had a slight weight-forward balance in the hands, which I like. The bolt isn’t of the short-throw variety, but it still provided ample clearance for the scope.

Functionally, I found no flaws with the rifle. Bolt cycling was slick and didn’t require much effort. Rounds loaded easily into the magazine and chambered without protest. Extraction and ejection of brass went off without a hitch. 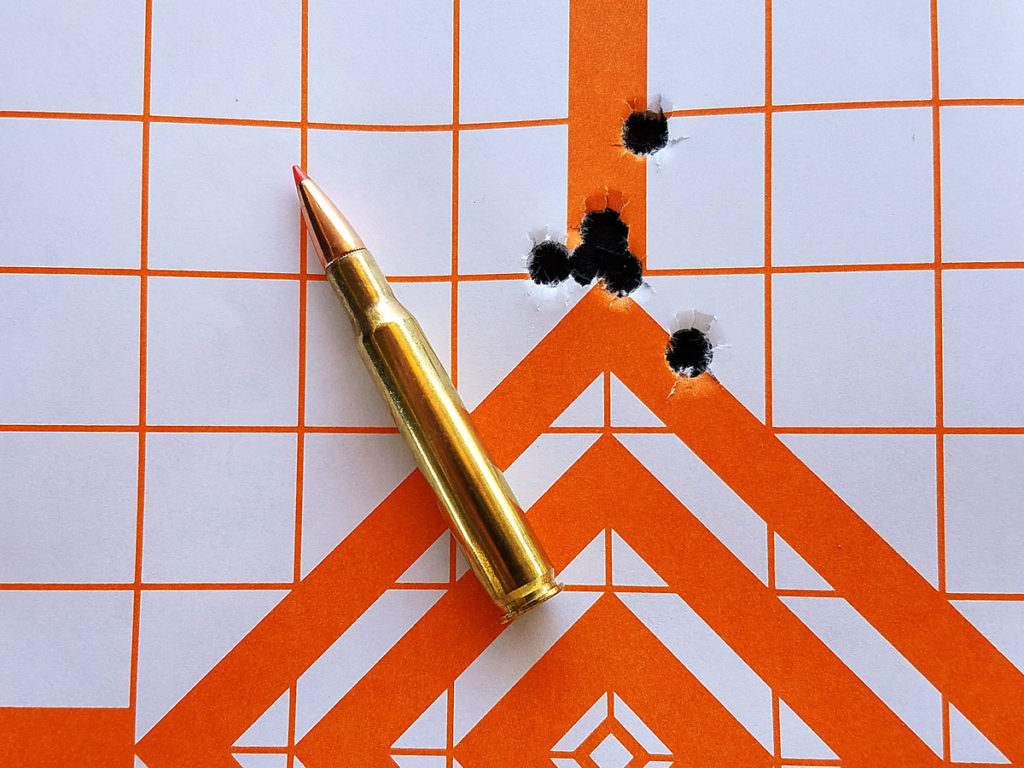 The somewhat slender barrel grouped the first several shots tightly, which is exactly what you want in a hunting rifle, with subsequent shots predictably opening groups up a bit as the barrel heated up.

With the rifle’s relatively slender-profile barrel, I expected groups to open up as the barrel heated, and that proved to be the case. If testing had been limited to groups consisting of the first three shots only, the numbers from my accuracy testing would be more impressive, as the rifle shot tighter with the first three shots. Shots four and five consistently skewed the results. That’s partly because I didn’t always give the rifle a chance to cool down much between shots in a string. Even so, results with most tested loads were perfectly fine for most hunting applications. Three of five loads delivered average five-shot groups of around an inch and a half, with best groups doing better than that, despite the fact that I was shooting in wind gusting to 14 mph.

While five-shot groups are something of a standard, they are of questionable value, to my way of thinking, in gauging the accuracy of a sporter-barreled hunting rifle. Many such rifles will have groups open up as barrels heat up because they aren’t designed for high-volume shooting. They’re designed to be light enough for hunters to carry over distance and deliver an accurate first shot, and I would gently suggest that, if you haven’t accomplished the job with three shots on deer-sized game, you likely won’t get it done with five. 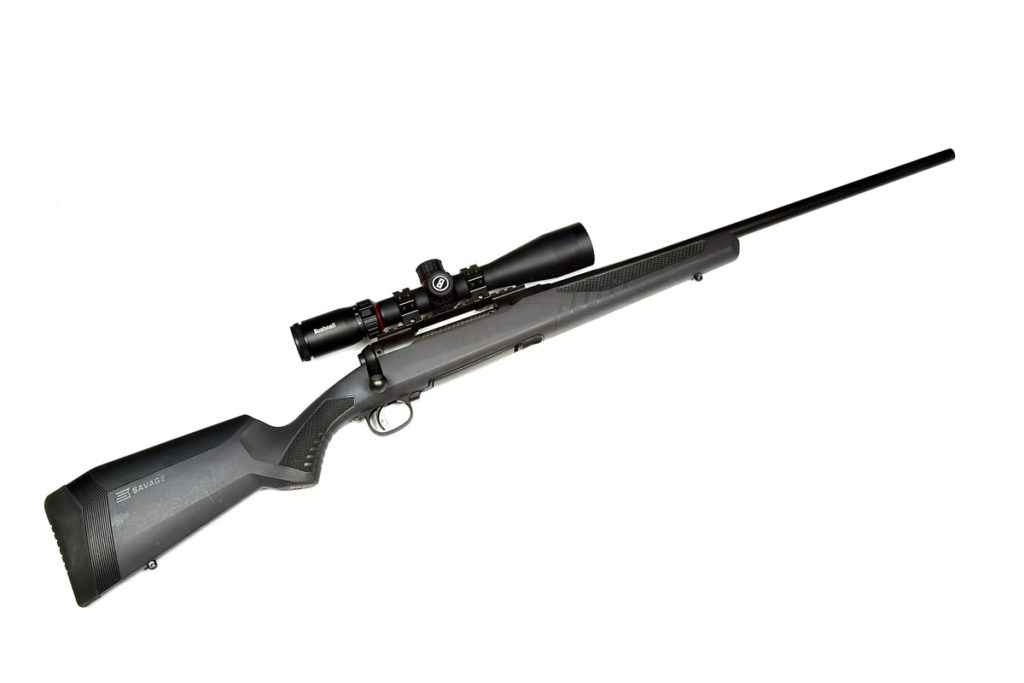 In addition to the AccuFit stock system, the new 110 Hunter comes with all the features shooters have come to expect in Savage rifles.

The proof is in the shooting. Had I limited testing to groups shot with the first three rounds, all but one of the tested loads delivered average groups measuring little more than an inch, with one load turning in average three-shot groups measuring just half an inch.

If you do your part, the 110 Hunter AccuFit rifle, with a MSRP of $749, will hold up its end of the deal, delivering custom performance without the custom price tag. 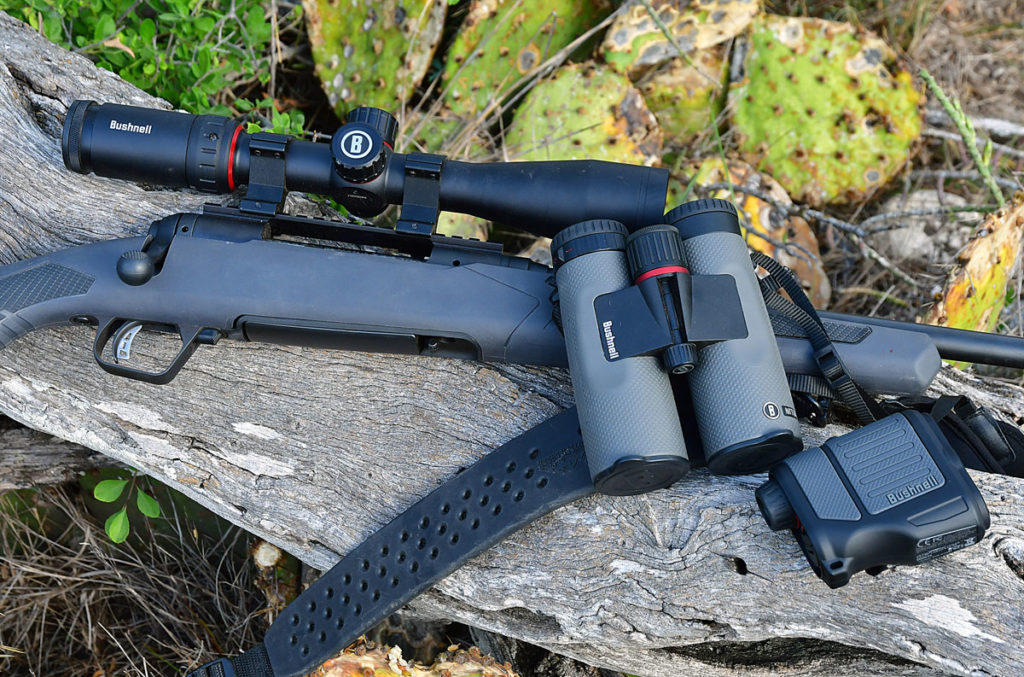 The author employed new Bushnell hunting optics on his hunt and came away impressed with their sharpness, clarity and a new EXO barrier coating that bonds with the glass molecularly to defy the elements.

Several new Bushnell hunting optics got a workout during my hunt, and I came away impressed. The high-end Forge line includes three rifle scopes, several binocular models and a couple of spotting scopes. They feature elite glass delivering 94 percent light transmission and a new EXO Barrier coating that bonds molecularly with the glass to repel moisture and dust. The Forge binoculars I used were as clear and sharp as optics I’ve used from other manufacturers costing far more.

At the intermediate price level, which many hunters will favor, is the Nitro line, which includes an extensive range of rifle scopes with 30 mm tubes, binos, and the Nitro 6X 20 mm 1-Mile rangefinder. These models have ED glass with EXO Barrier coating and deliver 93 percent light transmission.

Hunters on a budget will appreciate the new Prime line of optics. These products deliver a lot of bang for the buck with ultra-wide band coatings, side parallax adjustment on select rifle scope models, and wallet-friendly prices across a full range of rifle scopes, binos, spotting scopes and rangefinders.

There’s nothing like using products on an actual hunt to gauge their value, and the Forge binoculars and Nitro scope I used were returned with the greatest reluctance. 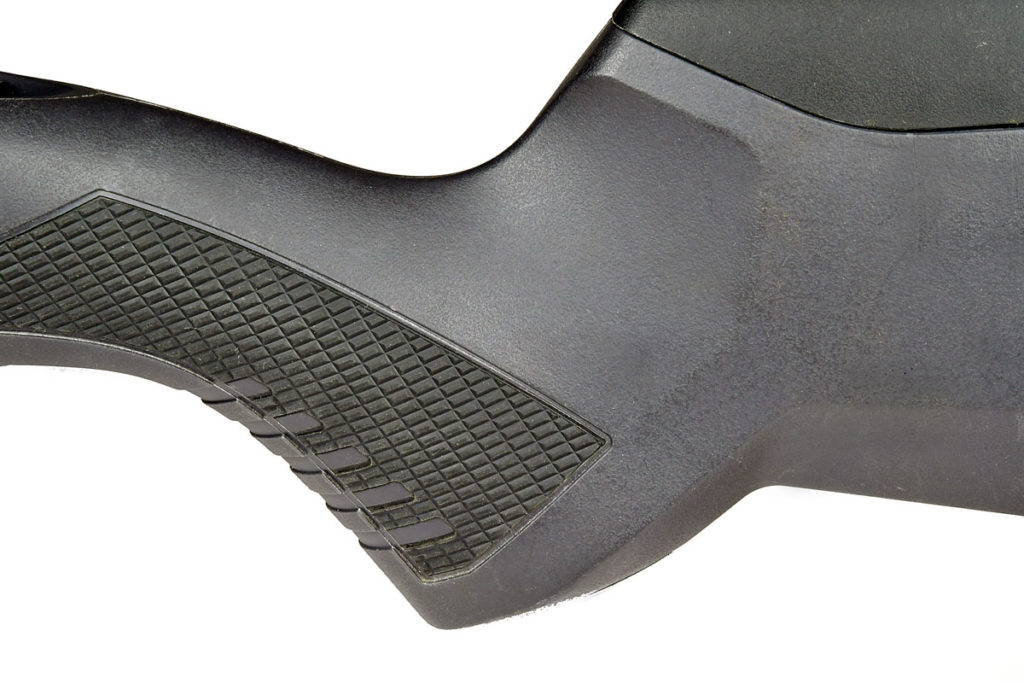 Soft overmolded fore-end and pistol-grip surfaces provide a sure grip in inclement weather. 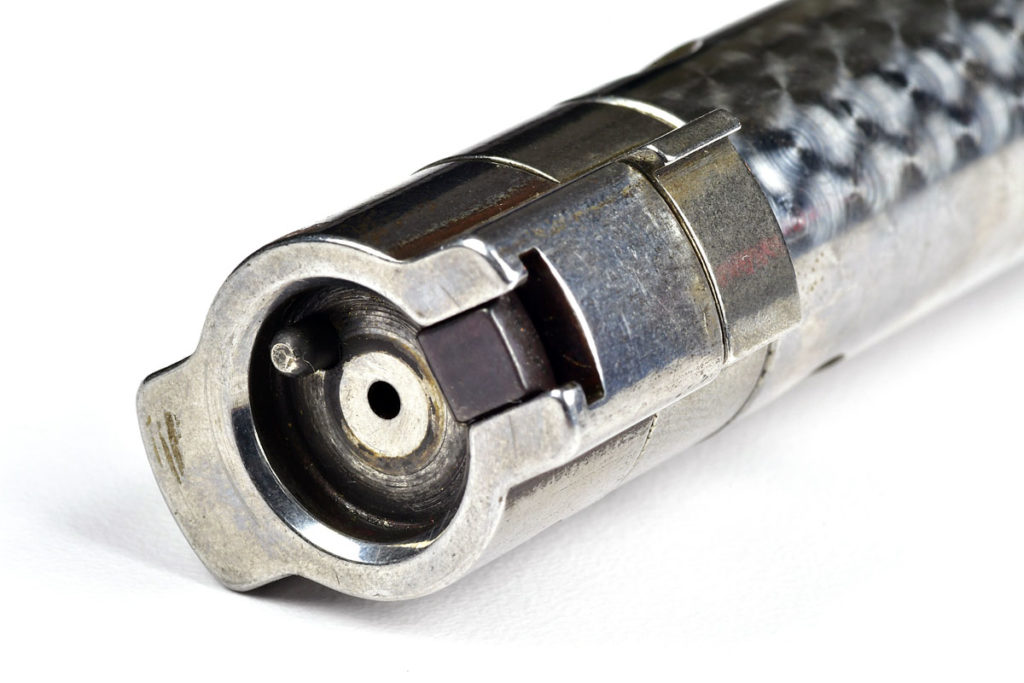 A hallmark of Savage rifles is the floating bolt head, which self-adjusts for maximum accuracy.

Visit Savage to learn more about the Savage Accufit Rifle by clicking HERE, or if you’re interested in Bushnell’s new hunting optics HERE

***Shop GunsAmerica for your next hunting rifle***