The Air Venturi Wing Shot is the first production pre-charged pneumatic shotgun. Their big innovation is a plastic shotshell system that fires shot at 1130 feet per second up to 30 yards. This is an air gun built for aerial target shooting and hunting upland game birds. It hits like a .410 loaded with 3/8 ounces of shot.

The big technical challenge in creating an effective air powered shotgun is how to make a shot casing which can maintain a tight pattern while delivering the right amount of shot at lethal velocities. The Air Venturi Wing Shot air shotgun accomplishes this with a thin plastic hull that breaks apart leaving the barrel to deliver the shot. You can purchase pre-loaded #6 or #8 shot or empty shells to fill with your own shot loads.

But wait, there’s more. You can take off the removable choke and load up slugs. Now you are good for large game hunting including predators, hogs or trophy whitetail. As an added bonus, the Wing Shot can also fire air bolts from its smooth bore barrel making the Wing Shot. 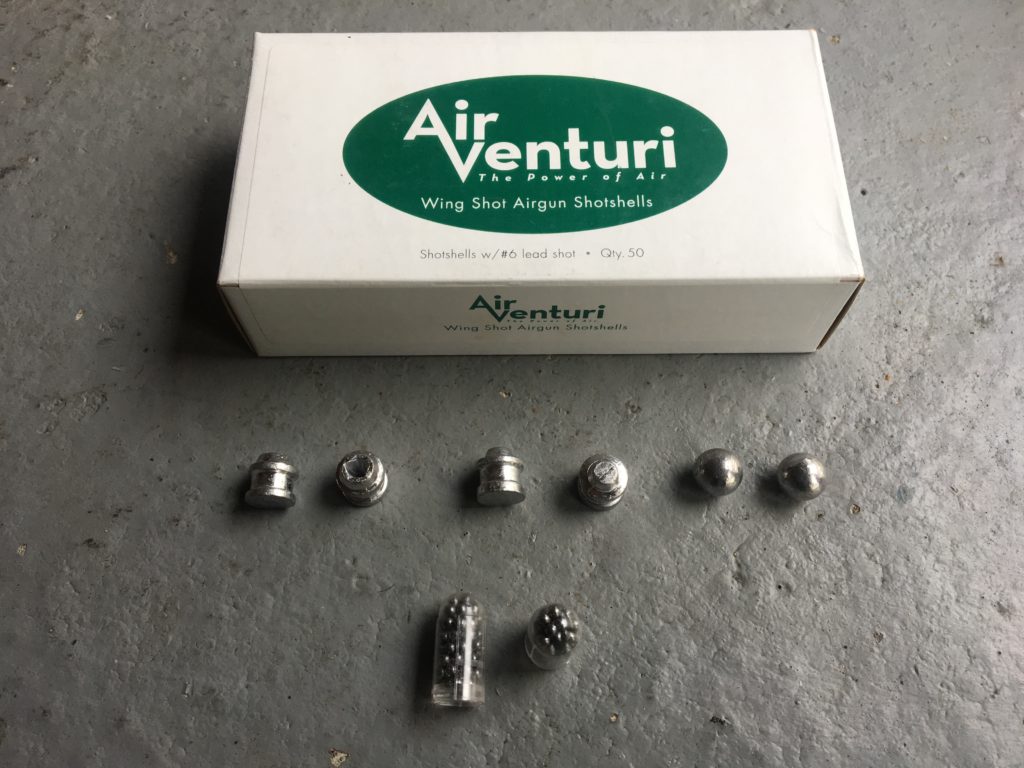 Air Venturi projectiles From Left to Right; 185gr Hollow Points and 210 Flat Points and 177gr Round Ball. They come in fifty round boxes.

Of all types of airgun power plants, the pre-charged pneumatic (PCP) system is the most versatile. The Wing Shot and other PCP guns use compressed air cylinders in the foregrip or stock to push pellets downrange with consistent accuracy. 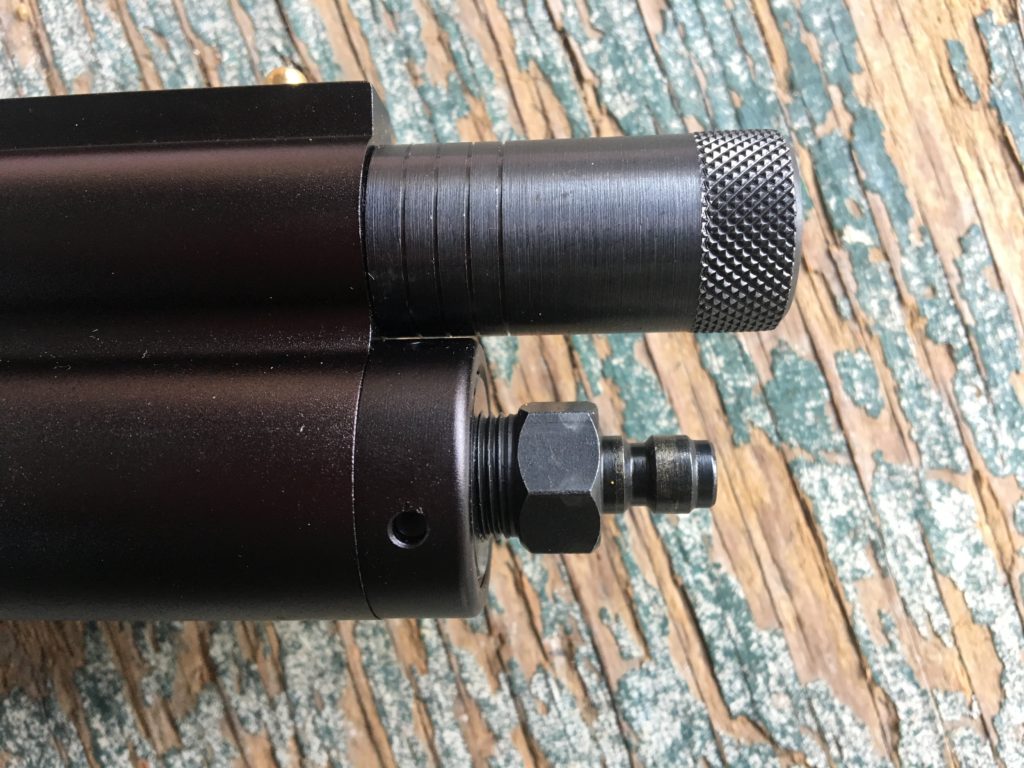 The air cylinder on the Wing Shot fills to 2,900 psi (200 BAR) with a Foster style quick connect for easy fill-ups. When not in use, a protective cap snaps in place keeping dirt and debris out of the fill port. A built-in pressure gauge located underneath the stock is marked to show effective operating pressures and overfill. 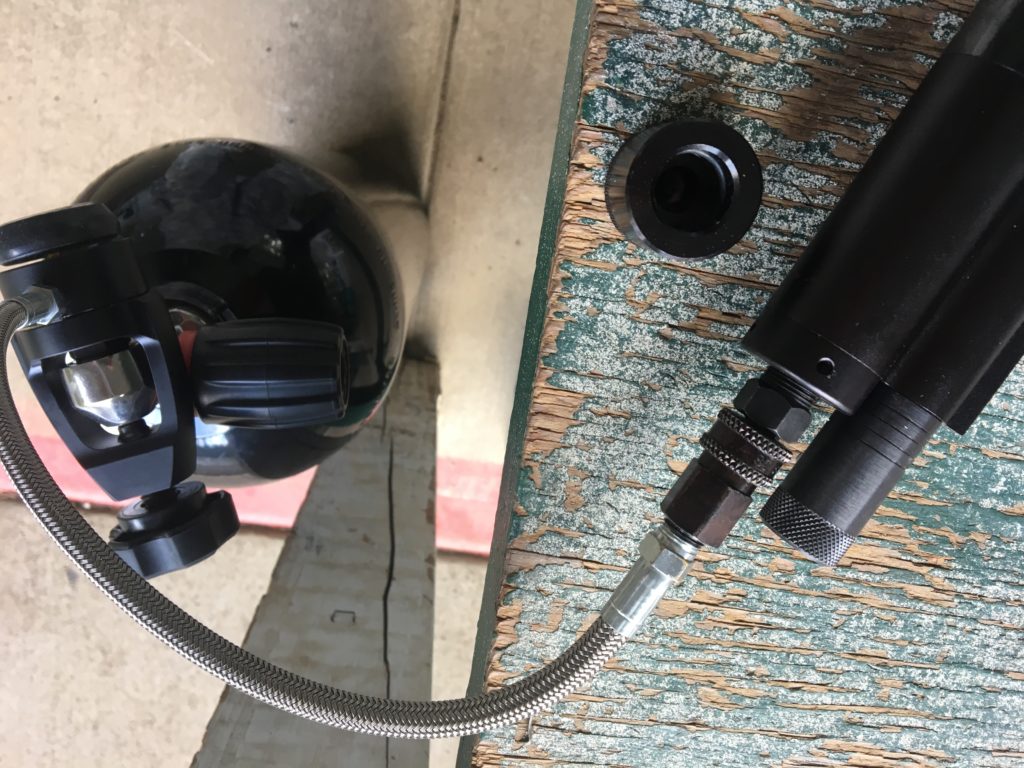 Refilling from a scuba tank

Where does the pressurized air come from? You can fill the cylinder from an air tank (SCUBA or carbon fiber), a high-pressure hand pump or a compressor. The cocking mechanism of the Wing Shot is a straight pull bolt action that features a high and low power setting. Cocking effort reduces over time and use. The Wing Shot can fire up to five rounds at the low power setting before needing a refill. 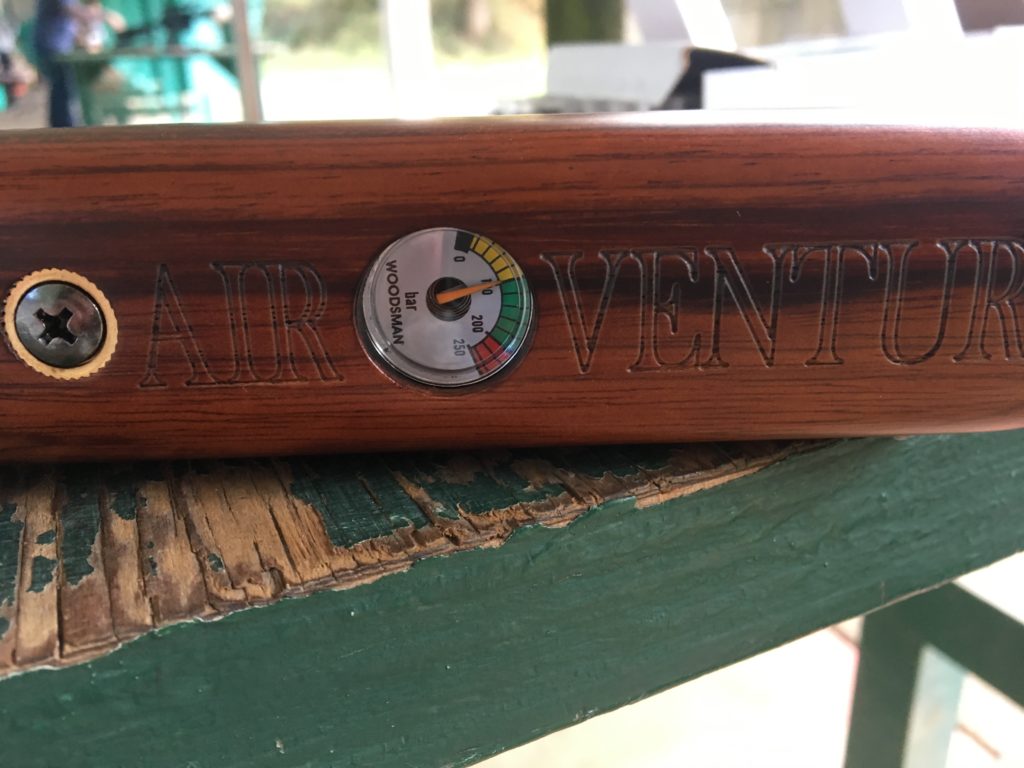 Pressure gauge in the forearm.

The Wing Shot is well balanced with a solid hardwood stock that mounts like a high dollar shotgun. The stock features a straight shotgun style grip with an ambidextrous cheek riser. It is a little front heavy but it comes up on target quick and tracks very well. 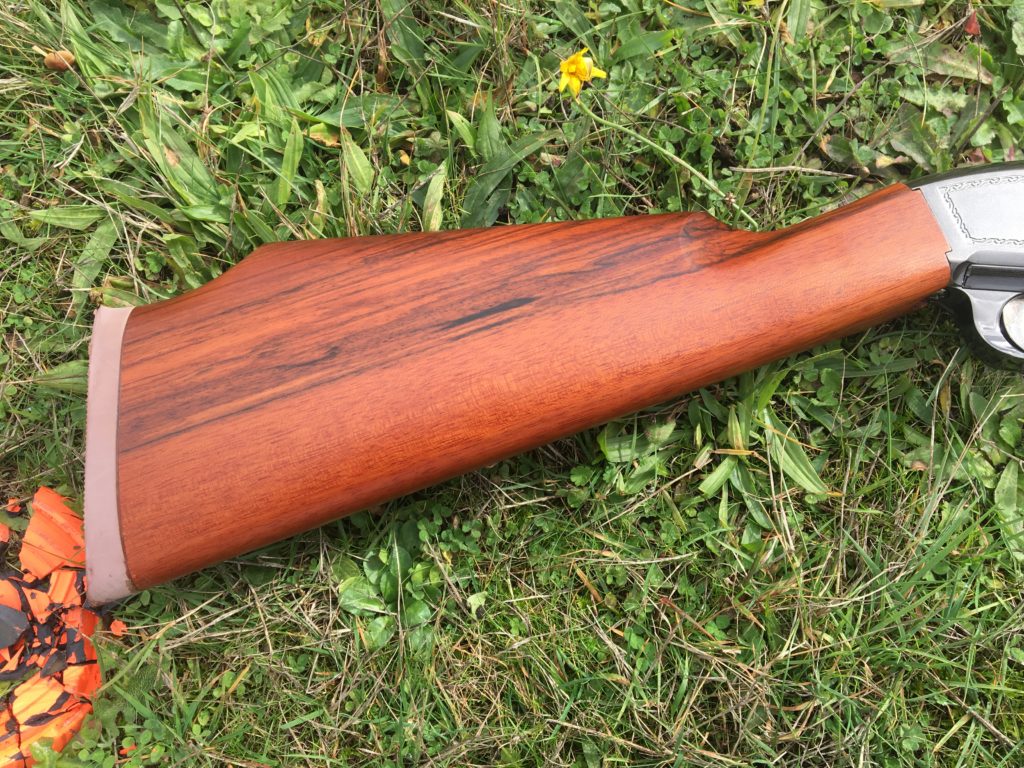 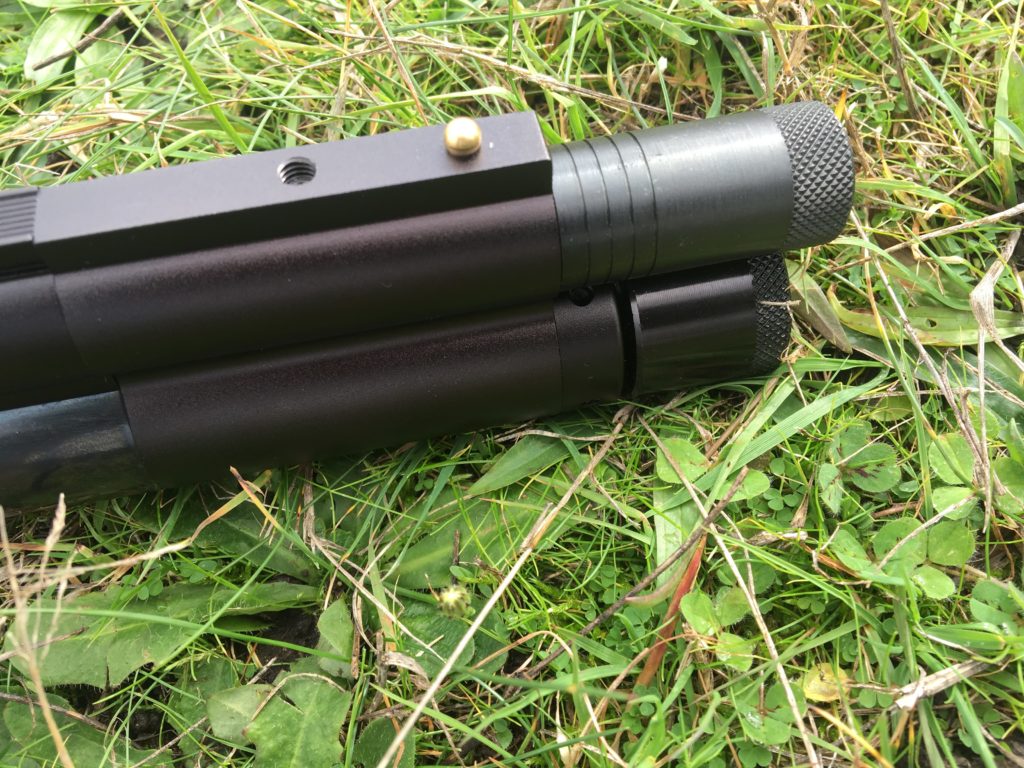 With a brass bead sight and a ventilated rib, it is very effective for wing shooting dove or quail-sized birds and small game. These sights are also surprisingly effective with slugs. 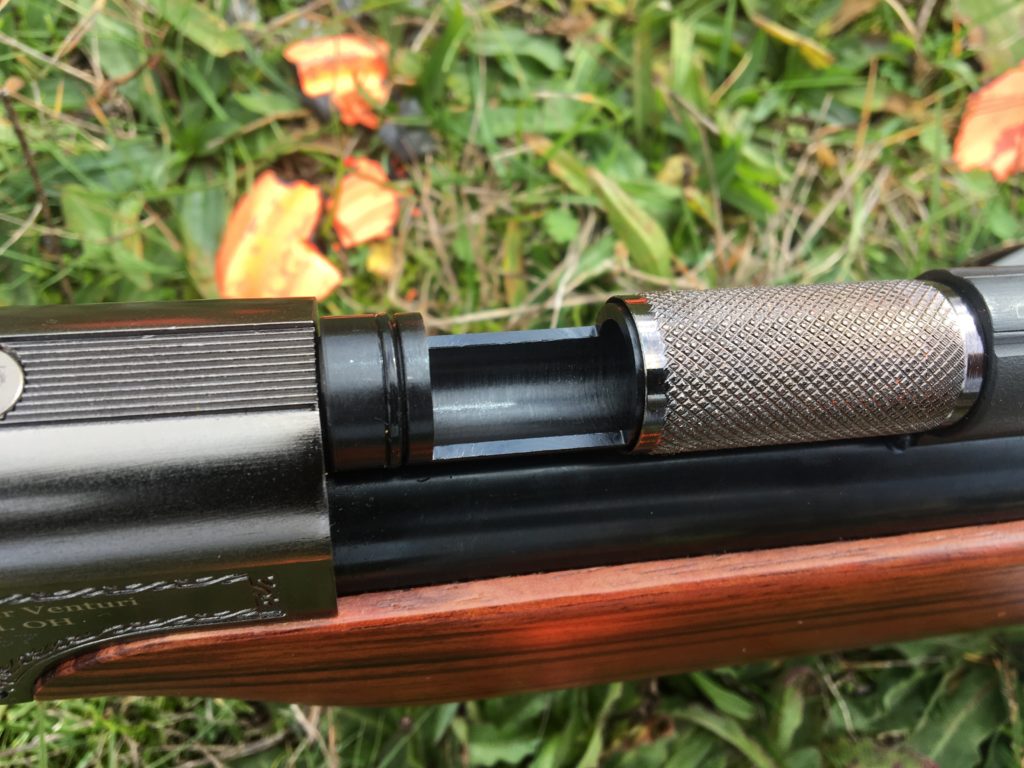 The Wing Shot is a single shot with shells loaded individually. You simply slide the loading port cover back, insert the shell or slug, then slide the port cover forward to seal the chamber. 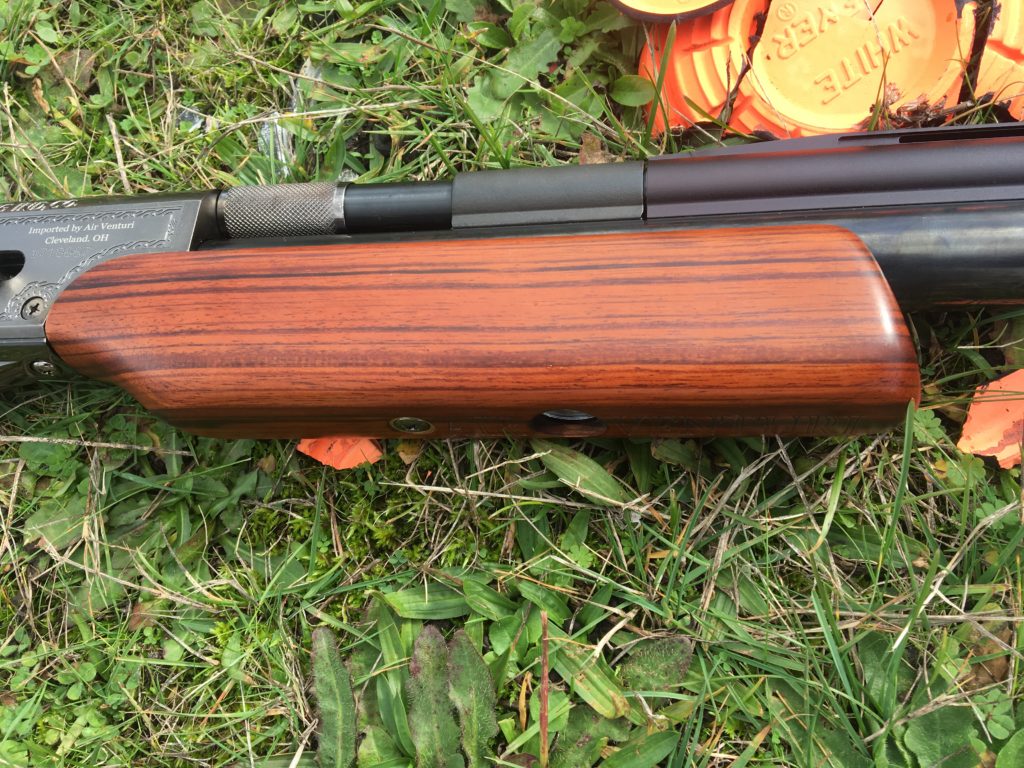 You expect air guns to be quiet, but guns this powerful are not silent. The Wing Shot makes a sound like a pneumatic hammer. You don’t need hearing protection, but your neighbors will know something is going on in your backyard. 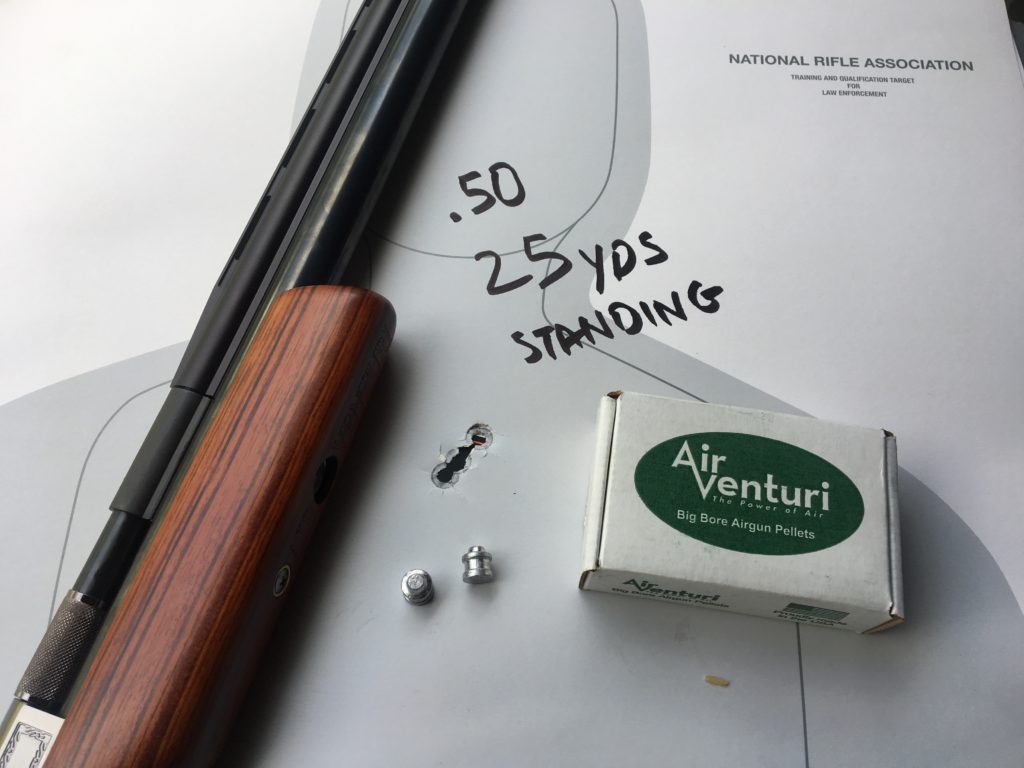 Measured in Foot-Pounds of Energy muzzle energy is the kinetic energy of a slug or air bolt as it is shot from the muzzle of the gun. Muzzle energy tends to be a more accurate representation of the power of an air gun. FPE is a critical number for determining if a gun and projectile can be used to ethically on specific prey.

You must be aware of muzzle energy when choosing an air gun for hunting pests or varmints. Most manufacturers will state muzzle velocity in feet per second (or FPS) in the product specifications, but muzzle velocity doesn’t tell the whole story. In airgun hunting, faster velocities don’t always translate into more knock down power. A light alloy pellet traveling at high velocities won’t have the same energy as a heavier pellet traveling at lower velocities. This is where the .50 cal Wingshot shines.

Shot: With the shotgun option you can get velocities of 1130 feet per second with 360-foot pounds of energy using No. 8 shot. It’s the ideal tool for upland or small varmint hunting.

Slugs: Hunting for larger game like javelina or coyote? With .50 caliber bullets, the Wing Shot II rifle offers speeds of 760 fps and over 245-foot pounds of energy (FPE). You must UNSCREW THE CHOKE BEFORE USING LEAD SLUGS.

Bolts:  With Air Venturi’s Air Bolts you can turn your air shotgun into a hard-hitting arrow launcher capable of speeds up to 500 fps and 238 FPE. 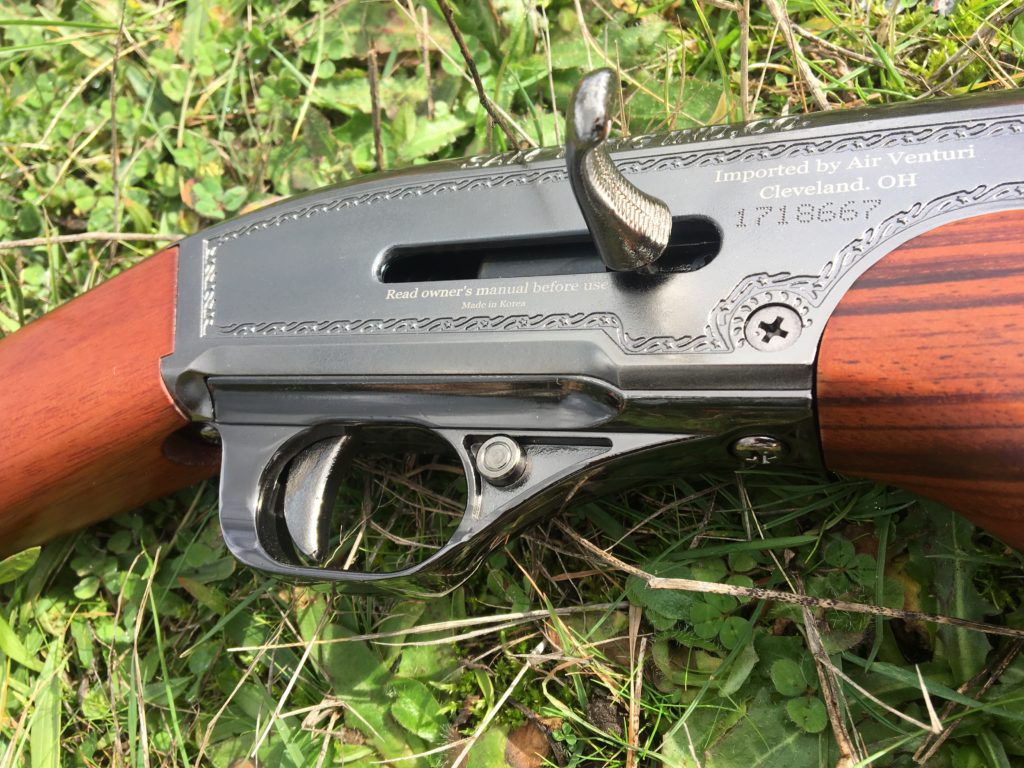 Patterning the Wing Shot, I got a spread of about 5 inches at 10 yards and about 12 inches at 25 yards. The choke is removable. I noticed that the pattern was affected by the pressure in the air tank. The pattern gets bigger at lower pressures in the gun dropped off. The pattern below was the third full power shot from a full tank. I was typically able to get three rounds at high power and five rounds at low power. 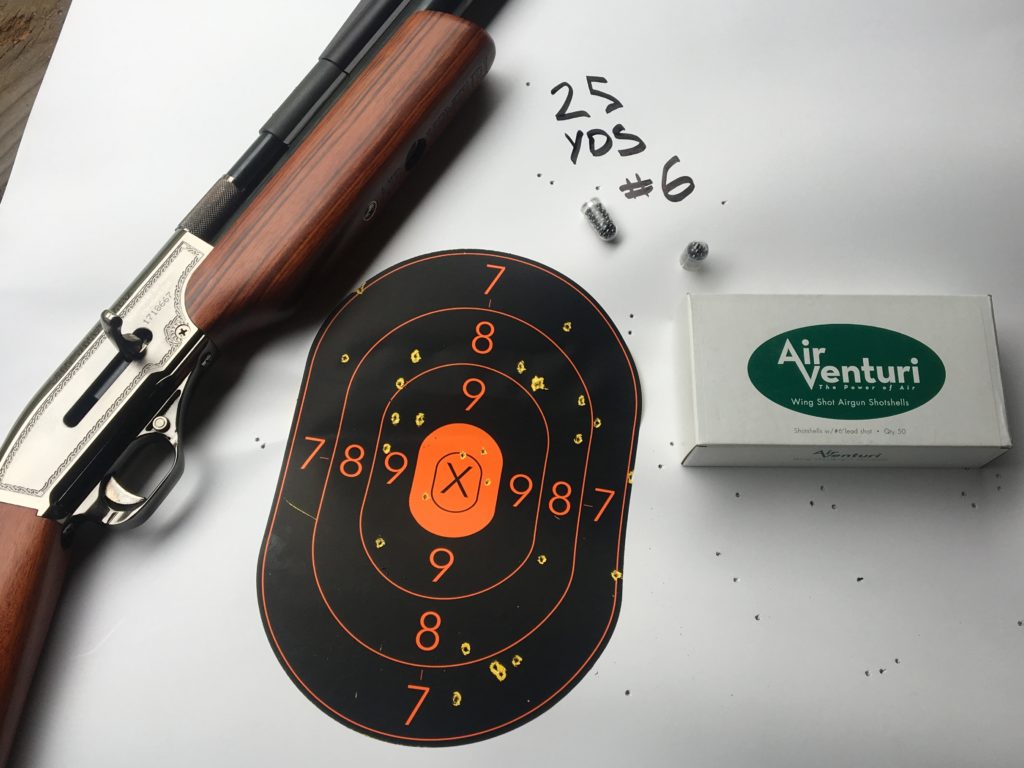 Firing slugs out of the .50 caliber smoothbore barrel was much more accurate than I dared expect. I tried three different Air Venturi projectiles, 177gr Round Ball, 185gr Hollow Points, and 210 Flat Points. They come in fifty round boxes.

While they were all accurate enough for hunting, I found the Air Venturi 210gr Flat Points gave me the best groups. The 25 yards three round group below came on high power from the same tank fill. It measured under 2 inches. The Hollowpoints shot similar groups while the round ball was about 4 inches.

The Wing Shot has a single stage trigger with a soft take up and some over travel. It is a functional hunting trigger which breaks at about 5 lbs. Rifle shooters will find that the bead and vent rib sights take some getting used to. You may have to use some Kentucky windage to get the hits you need with 200-grain slugs that gave us about a 3-inch group. This level of accuracy will let you take close-range shots on predators, varmints and game.

I shot a few rounds on steel at 100 yards. It required significant holdover. In the afternoon with the low sun backlighting the range, I could see the slugs arching into the target. While it may retain significant energy, I would recommend attempting to take the game out that far, even on high power.

Weighing less than 7.5 pounds, the Wing Shot is perfect for new shooters. The lightweight, low noise level and the lack of recoil will let you shoot all day without a sore shoulder and you can hear your coach because you don’t need ear muffs. 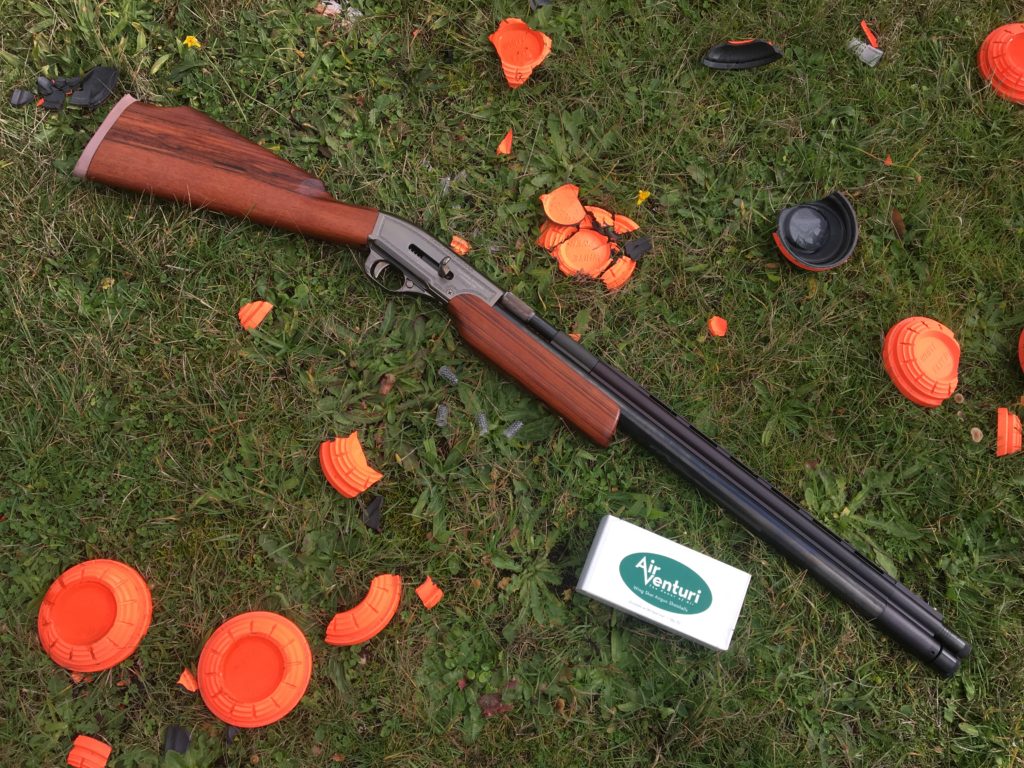 You can shop for air rifles on ***Buy and Sell on GunsAmerica! All Local Sales are FREE!***