The Colorado Bighorn Sheep Hunt of a Lifetime! 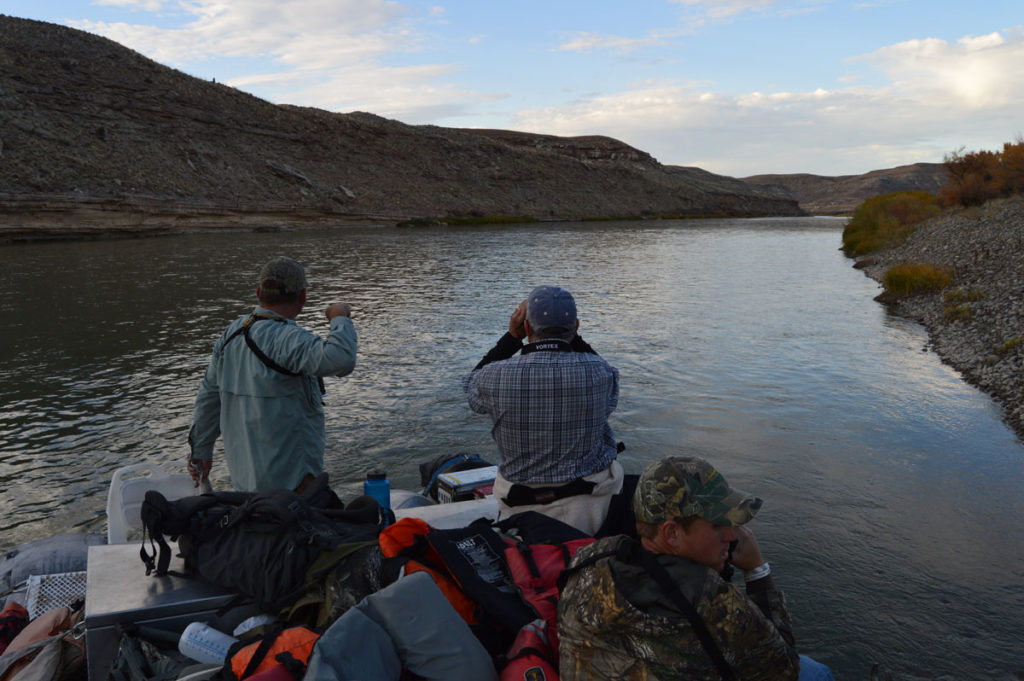 Glassing a heard of lambs and ewes on the way to camp.

Without question, one of the most iconic big game species of the west is the Bighorn Sheep. The ruggedness of these amazing creatures has made them one of the most sought after species in North America. The tags for these monarchs are few and far between for Rocky Mountain Bighorn, and even fewer for Desert Bighorn. If you draw one of these tags you should thank your lucky stars and be prepared for one of the greatest hunting experiences that the West has to offer. I was lucky enough to draw one of these incredible tags, Desert Bighorn in Colorado, the very first year I had ever entered the draw. With a tag like this the anticipation is usually the most exciting part, as these animals are not hunted often and can be easy to find. But this hunt was not that way.

“Professional” or “talented” hunter isn’t exactly a title I can claim, but I do believe in working hard and putting in the scouting hours in order to find the animals. The year I drew this tag also consisted of over 100 days of travel, so unfortunately for me, I was not going to be able to scout the area the necessary number of times to get the job done. This tag is a once in a lifetime in Colorado, so you can’t mess around on a one and done hunt.

After much deliberation, I was forced to hire a guide, who would cost me $6000 for a seven-day hunt. He came highly recommended from several hunters who had used him on previous hunts. However, I refused to be “one of those guys” who shows up on opening morning and just pulls the trigger and takes pictures. I made sheep my life, I learned how to field judge them, what their habits were, and what drove them to choose one habitat over the other. Twice that year I made the four-hour drive to Grand Junction to scout with my guide and learn the area. I learned to look for water sources, south-facing slopes, and the trails that they used to get to and from these places. This all helped me spot sheep while I was scouting. I put more miles on my low top Merrell hiking boots than any other pair of shoes I have ever owned. Their low cut and lightweight design really let me cover the extra miles while scouting.  It was very important to me to be invested just as much in the preparation of this hunt than the actual hunt itself. It is in the preparation that the satisfaction of the kill is truly rooted. 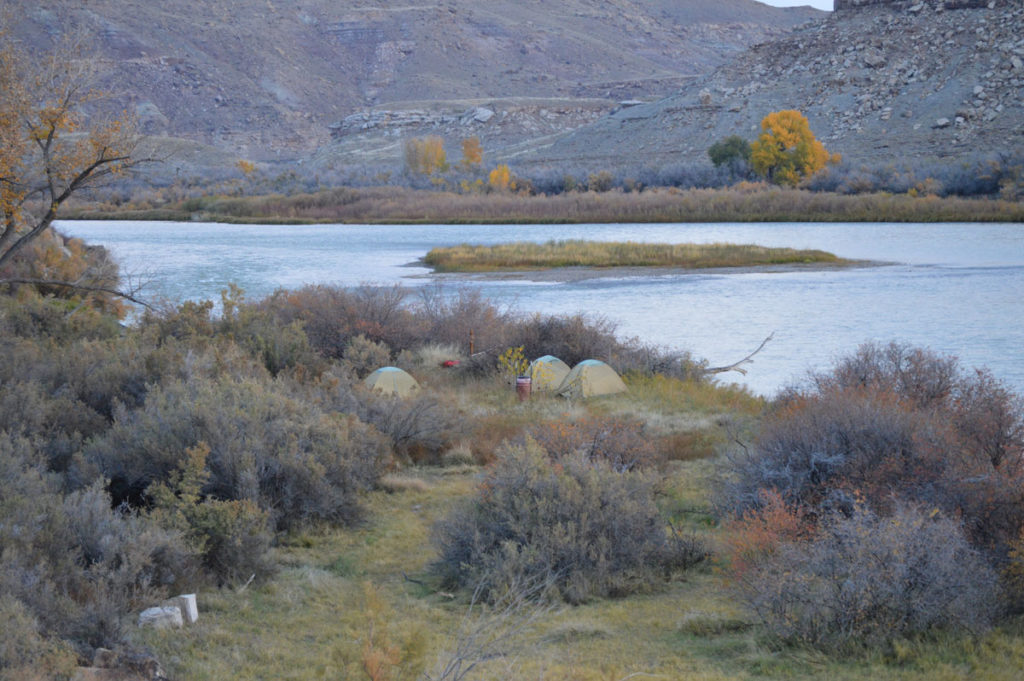 Basecamp on the bank of the Colorado.

My Unit was s56 near the Grand Mesa in Colorado. I tell you this because, as I already mentioned, the tag is once in a lifetime and Colorado only gives out 3 tags for the unit. So if you feel lucky, go for it. This was one of the most beautiful places I have ever had the privilege to hunt in Colorado. Blood red cliffs giving way to giant piñon and juniper flats, that eventually drop down to the Colorado River.

We floated the Colorado river down to our camp the evening before opening day. We had a herd of 20 lambs and ewes greet us as we disembarked the boat

As we set up camp all the anticipation of a night before the opening day set in. We started talking about the plan for the morning, the direction that we would take from camp and reviewed pictures of the ram that we had taken on scouting trips to make sure he was the one we wanted to take.

After an all but sleepless night, the alarm finally went off, marking the start of Desert Bighorn sheep season for Colorado. As we exited our tents in the morning, discussing our plans for the day, I couldn’t help but hear a distinctive clapping sound ricocheting off the canyon walls. I asked my guide what the sound was and with a huge grin on his face, he looked at me and said, “The rut has started.” It was two rams colliding head-on, battling for the right to breed.

We took out from camp up this winding steep trail, in the direction that we had heard the sound of the rams fighting, and were soon shedding clothing. What had started as a nice morning hike quickly turned into a hand and knee vertical climb. Once we reached the top, we headed in the direction where we had seen the sheep from camp the night before, immediately running into a small band of different rams that we had not seen before. After a quick glass with my Vortex Viper 15 x 50 binoculars, we saw nothing to best the ram we were after. We left the smaller rams behind us bounding over the next rise.

As we approached the location we believed the ram to be, the loud clapping sound turned into a definitive crack. We knew we were close! While we were on top of a small hogback taking a water break, we heard the crack again but this time much louder. The guide crawled over to the edge of the rock cliff and immediately gave me the sign of a big ram. The whole crowd was now looking down on my ram, along with three others and apparently a very hot ewe. For over 30 minutes we watched the rams fight each other. Clashing horns, posturing and chasing the ewe around, and doing every cool sheep behavior you could possibly want to see from wild sheep.

In all this excitement, I didn’t even consider shooting the ram; I was in awe of the show and just wanted to take it in. Finally, things started to calm down and now it was game time. I laid down in a prone position, hanging over the edge of the cliff, took the range with my Bushnell Bone Collector Rangefinder and it read 150 yards. I placed the crosshairs of my Schmidt Bender on the sheep low, right where the leg and chest meet, hoping to account for the steep shooting angle. Just as I was about to pull the trigger of my Krieghoff Semprio 300 win. mag., HE LAID DOWN! I guess after all the action the ram needed a little nap. Not a big deal, but where he decided to bed, there was a rock blocking everything I wanted to shoot at. 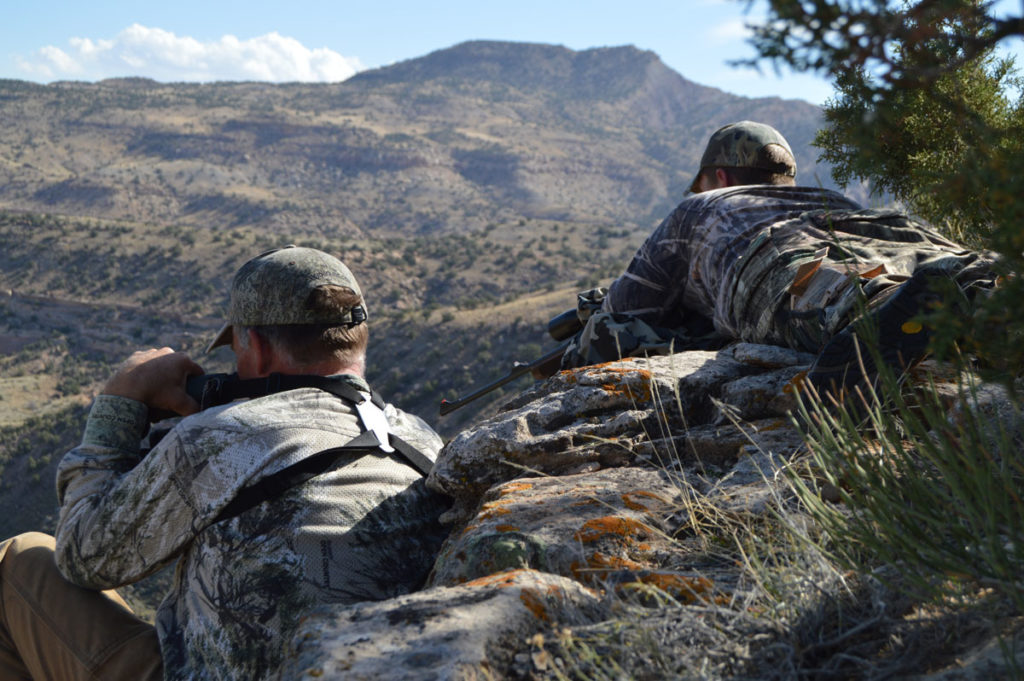 Laying on cliff edge waiting for the ram to stand up and present the shot.

I thought it would never end. My feet were asleep and my left arm kept getting numb.

Finally, the ram stood. My guide quickly got everyone’s attention, and I went in to make the shot. I looked through the scope, placed the crosshairs on his vitals right in the money maker once more and squeezed. Boom! I had missed, after two hours rehearsing. I sent the Federal Trophy Copper 180 GR right over the ram. Luckily the benefit of shooting a Semprio is that its inline repeating action allowed me to reload. I quickly got another shell in the chamber and was ready to place a shot. I had never shot at such a steep angle and was not aware of how much it affected the shot. I aimed even lower on the ram with the second shot, almost having to shoot under him and dumped him. He was down and I had now joined the brotherhood of sheep hunters. 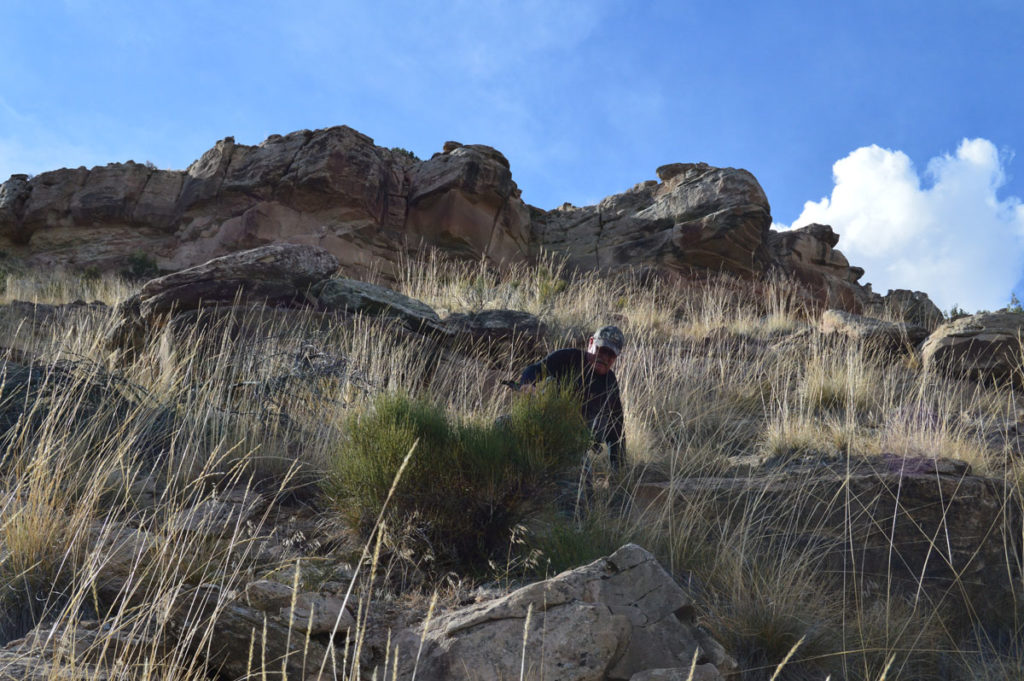 My Father descending down the cliff face to the ram.

As we descended a 100-foot cliff anticipation set in. As most big game hunters would tell you, the few moments on the walk to recover your trophy are some of the most anticipatory moments in any hunt. I all but ran down the shale face to get to the sheep, while my wife made sure my father didn’t fall to his death, and my friend nipped at the heels of my boots to beat me to the kill site. 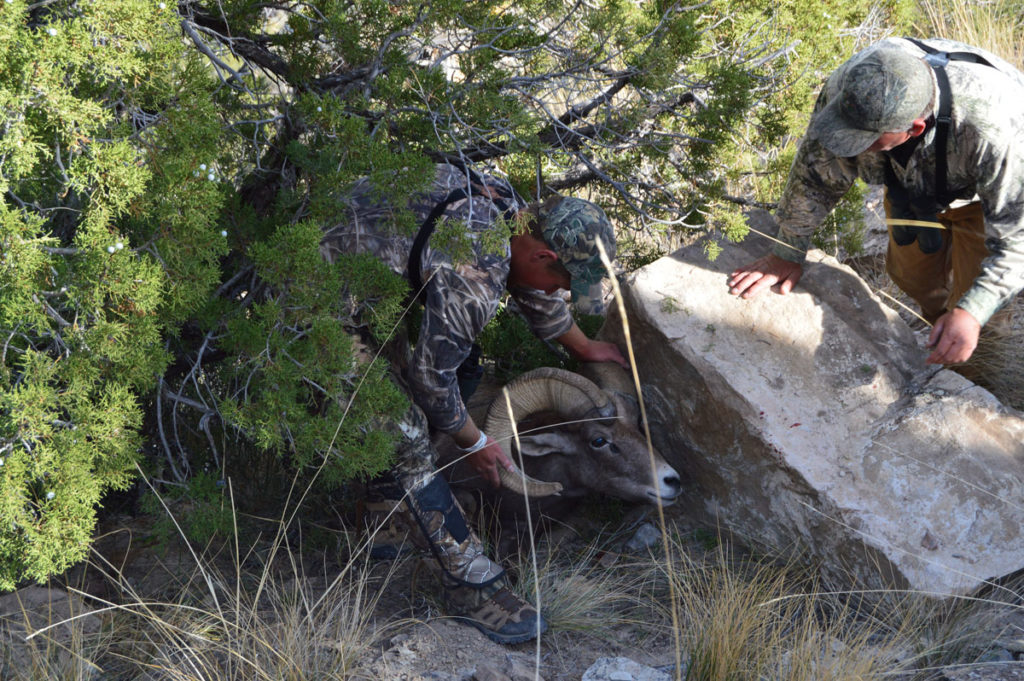 Placing my hands on the horns of a Desert Bighorn for the first time.

We arrived, unscathed. What we didn’t realize from the place of the shot was that my ram was standing on the edge of a 60-foot cliff edge and if the first shot had hit its mark, he most likely would have fallen over. The only thing saving him from the same fate with the second shot was that one of his horns had caught the branch of a juniper tree and saved him from plunging to the bottom.

At last, I had the chance to place my hands on this animal. The feeling of grabbing the bases of a bighorn sheep is unlike any other feeling in the hunting world. I had to put both of my hands together just to get my fingers to touch each other. You truly get a grasp of how magnificent these animals are and how heavy and dense their horns are. I was smiling from ear to ear, and as we ran the batteries dry taking pictures, it was time to process him and take him off the mountain. 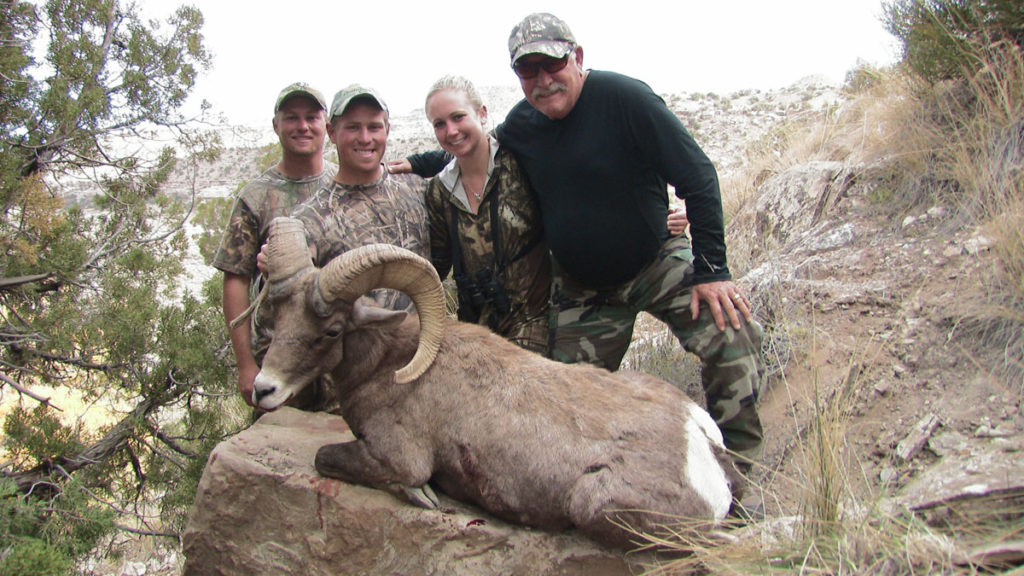 My dad, wife, and friend gathered around my ram

As we caped him out for a full body mount, using a Havalon for the entire task, I couldn’t help but replay the day in my mind. It was truly perfect. The only thing left was to get the one feeling every sheep hunter wants, and that is to put the horns on your back and pack them off the mountain. I turned to look down at the Colorado with the horns in my Cabelas pack and it was truly one of the most beautiful pictures I could have imagined. We packed the ram down, everyone helping to carry a quarter until we reached the boat. It was a dramatic way to end the day.

Unwinding around the campfire that night, watching sheep ribs cooking next to the coals, I couldn’t help thinking what a great hunt and adventure this had been. From that moment, it was in my blood and I had become a sheep hunter already thirsting for my next tag. 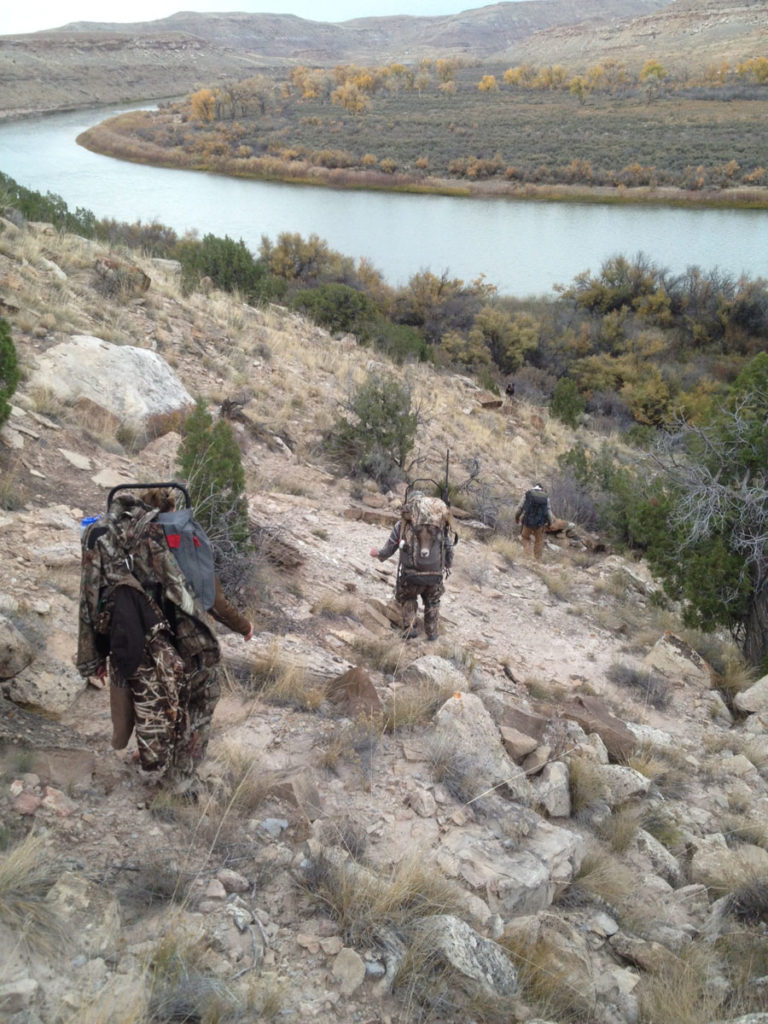 Packing the ram off the mountain down to the boat and back to camp.