Picking a Brush Gun For Whitetail

Modern Gun Whitetail Season is coming up fast here in the South. We have a lot of different terrain here that can be hunted, one of which is referred to as brush. What exactly is brush hunting? Well, it is kind of like it sounds. Heavy undergrowth in a forested area is a good descriptor. Specifically, one area where I hunt is planted with pine timber. There is an occasional open meadow that is rarely over 100 yards long. For this season I decided to change up my “brush gun.”

I have a few requirements that a brush gun must meet. The brush and the style of hunting that I typically use in these conditions dictate these requirements. Stalk hunting is going to be the norm with minimal time spent in a stand depending on time of day and weather.

Henry makes a couple of great choices for a brush gun.

The first thing I want to look at is caliber and bullet weight. A hunt in brush can definitely mean a shot that is through the brush. With this in mind, I want a heavier bullet, around 240 grains or more. The weight is to help mitigate any deflection if the bullet hits the brush before the deer.

I also want a rifle that is easy to carry, goes quickly to the shoulder and not so long that it can get hung up in the brush. For those reasons, I want a carbine sized rifle with a 16-18” barrel. Weight is also a factor here since it will be carried a lot. For me a rifle that is around 7-8 pounds is ideal. 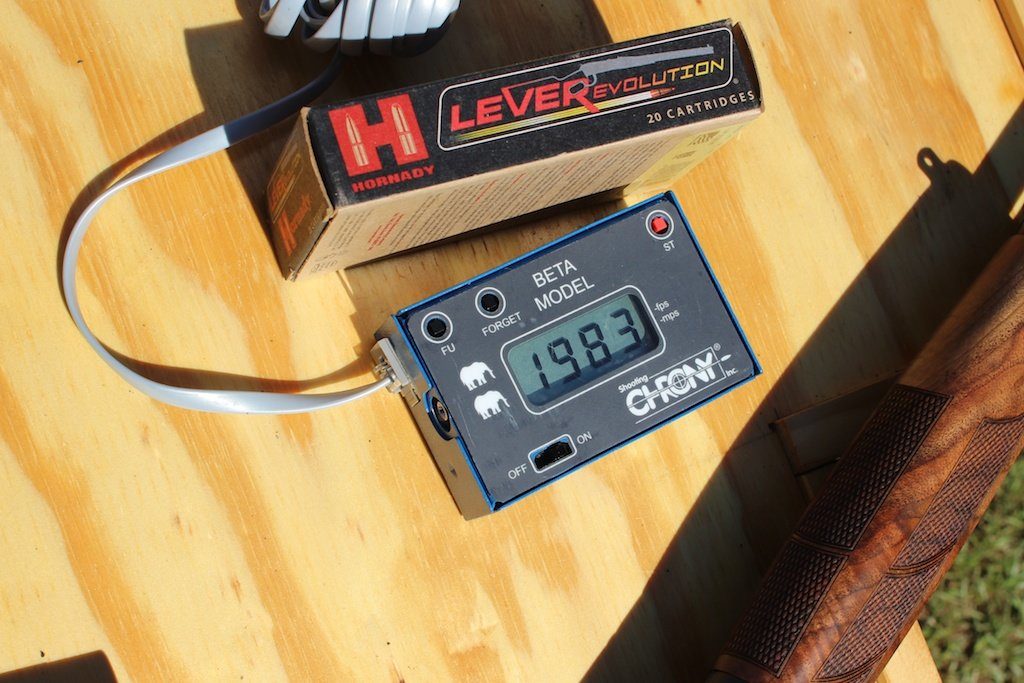 I do not like a sling on a brush rifle. The sling is just something else to get hung up in the brush. Murphy’s Law states that this will happen as you bring the rifle to your shoulder to shoot a Boone and Crocket level buck.

The ability to mount an optic is also important, more on that below.

With all of the above said, my choice was a 45-70 lever action from Henry. I reviewed one of these here on GunsAmerica a few years ago. You can find the full write up here. Let’s take a look at the specs on the Henry 45-70:

As you can see, this rifle fits my requirements pretty closely. Henry also offers a Picatinny rail for the top of the receiver for these.

Until about a year ago I would have said all you need on a brush gun is a good set of iron sights. Maybe add some color to the front bead or blade to help with quick target acquisition. As my eyes have gotten a bit older I have changed my tune. 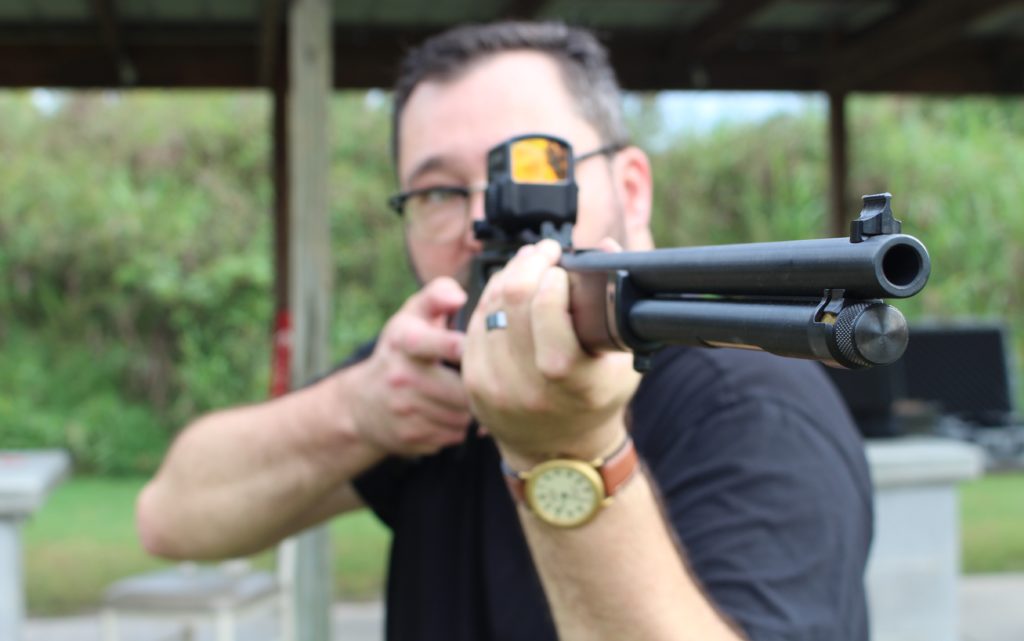 A red dot on a lever gun? Why not?

Yes, iron will still work and for some, it is a great or even the best choice. For one thing, there is no added weight. But if you are willing to trade off a bit of weight for an optic there are a couple of things to consider.

With the brush gun idea, we are talking closer ranged shots, many of them at 50 yards or less. The maximum range distance around 100-150 yards and even that would be a rarity. So, we need to look for a low power scope or a red dot for maximum field of view. There is nothing worse than not being able to find your target because your optic is zoomed in too tight. This is especially important when on a stalk hunt its brush. You never know when you might jump a deer and have to take a shot at a target on the move.

I went with the Leupold LCO for this brush gun. Like the Henry, this Leupold is made right here in the USA. But more importantly, it is rugged, has extremely clear glass and comes with a 1 MOA dot. I really like the small dot for if and when, I do need to take a longer shot. The zero magnification also makes having both eyes open a lot easier. 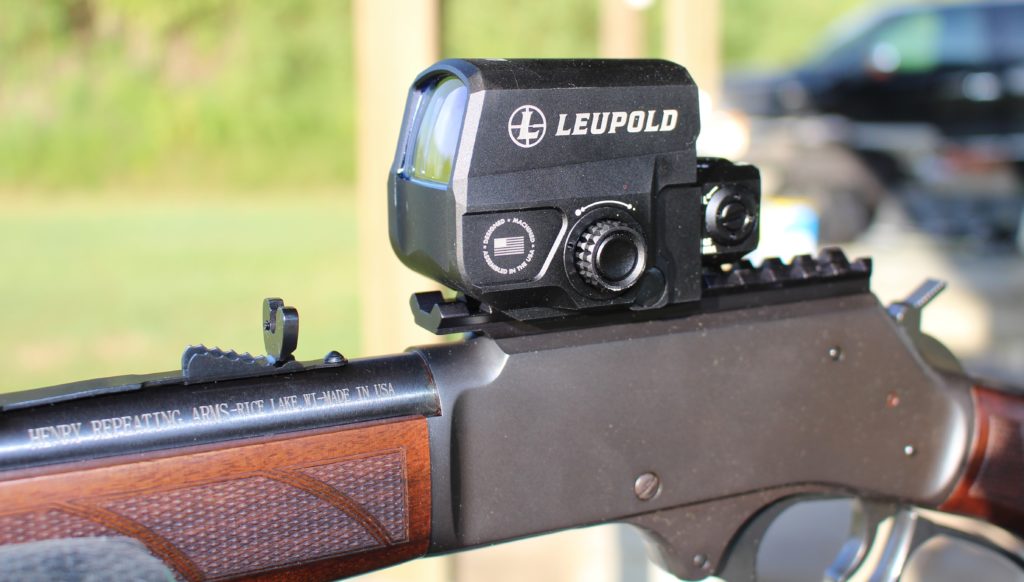 They are both made in the US of A.

The controls are very simple on the LCO. A simple push of a button turns it on. To change the brightness of the dot it is as easy are turning a dial. The dial has enough resistance to make it hard to accidentally change your setting but is still easy to turn with a gloved hand.

The LCO does set up a bit high on the Henry. If this were a traditional scope, it would be too high to get into a same check weld over and over. But one of the great things about this type of optic: the red dot doesn’t move if your head does. 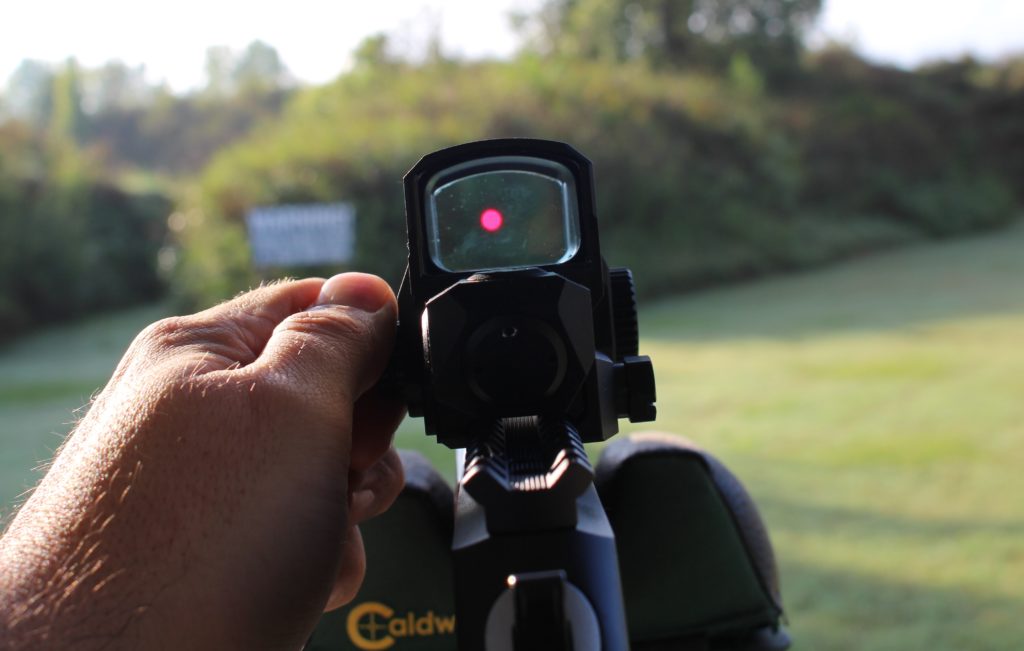 It looks a bit bigger when viewed through a camera, but this is a 1 MOA dot.

I plan on a full review on the Leupold LCO after deer season when I take it off the Henry and mount to my AR without the need to sight it in again.

I took the Henry 45-70 and Leupold LCO to the range a couple of times over the past few weeks. Just like I found in my original review of the Henry, it is a very reliable and accurate rifle. I have no issues with this gun as a hunting rifle. I would also trust the Henry in bear country where I could end up in a life or death situation. Actually, with the expansion of the feral hog population, this is not a bad idea to take into account for every hunt. 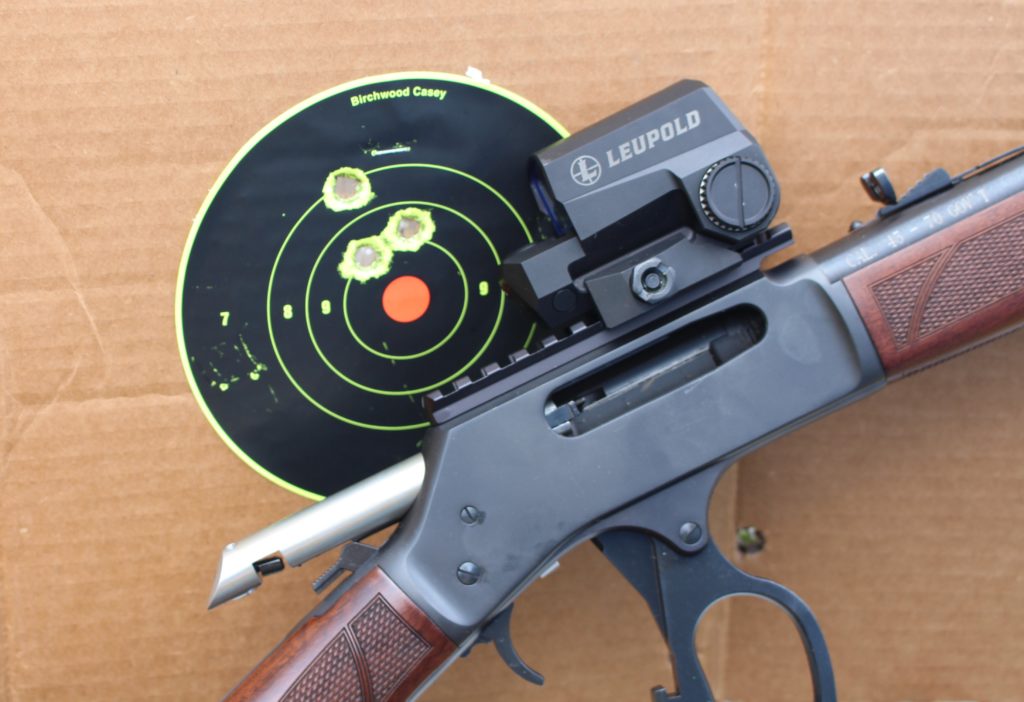 From 50 yards. I adjusted the elevation after the 1st, top, shot.

I started out at 50 yards to get the LCO sighted in for the Henry before I worked it out to 100 yards. The recoil from the 45-70 did not have any adverse effects on the LCO. It did set my zero an inch high 100 yards. My idea is that it would be a great middle ground for the varying distances.

I experienced less than 2 MOA results from the Henry and LCO with Hornady LEVERevolution 325 grain factory ammo. I am confident in that level of accuracy for a brush gun. Heck, I am happy with that from just about any rifle for hunting. 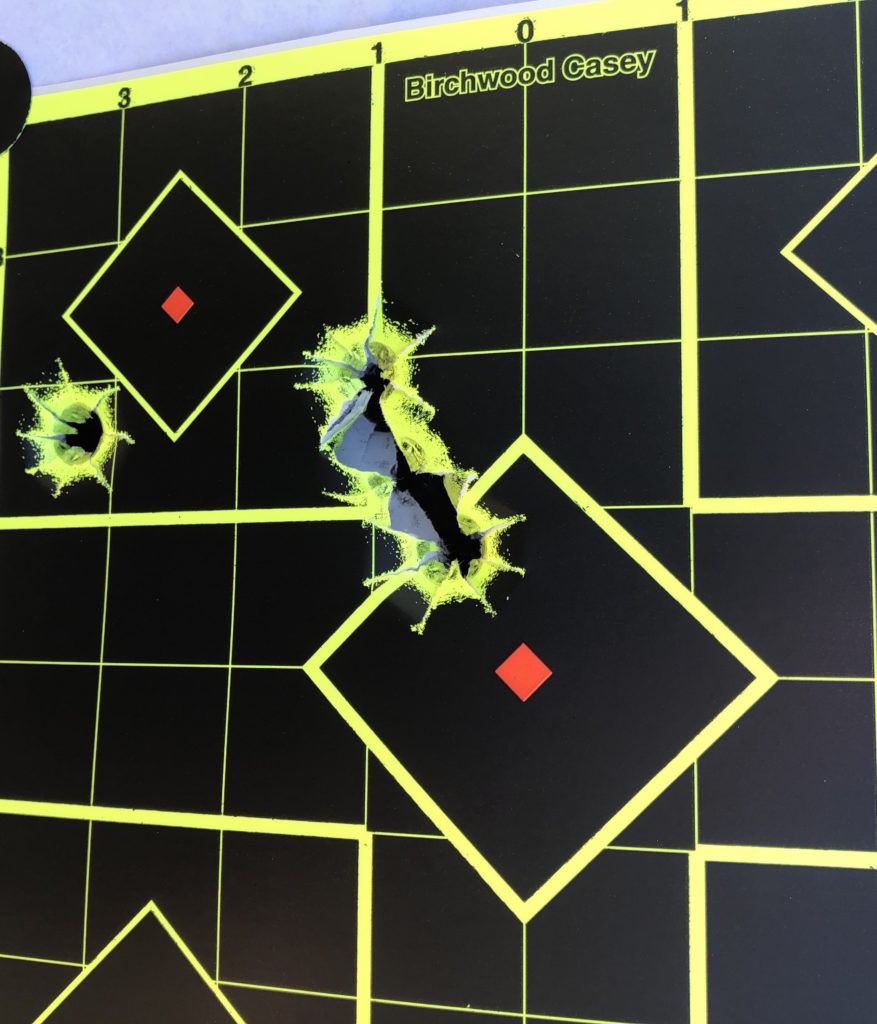 I feel I have a winning set up here with the Henry and the Leupold LCO. This set up fits what, in my opinion, is needed for a brush gun for Whitetail. The 45-70 with the 325 grain Hornady will drop a deer where it stands if I do my part. It will also provide enough power and penetration for even the largest hog if needed. The LCO is fast to target and the lever is quickly manipulated for a follow-up shot if needed.  With a bit of luck, I hope you will get to read a successful hunt story with this brush gun on #HUNT365. 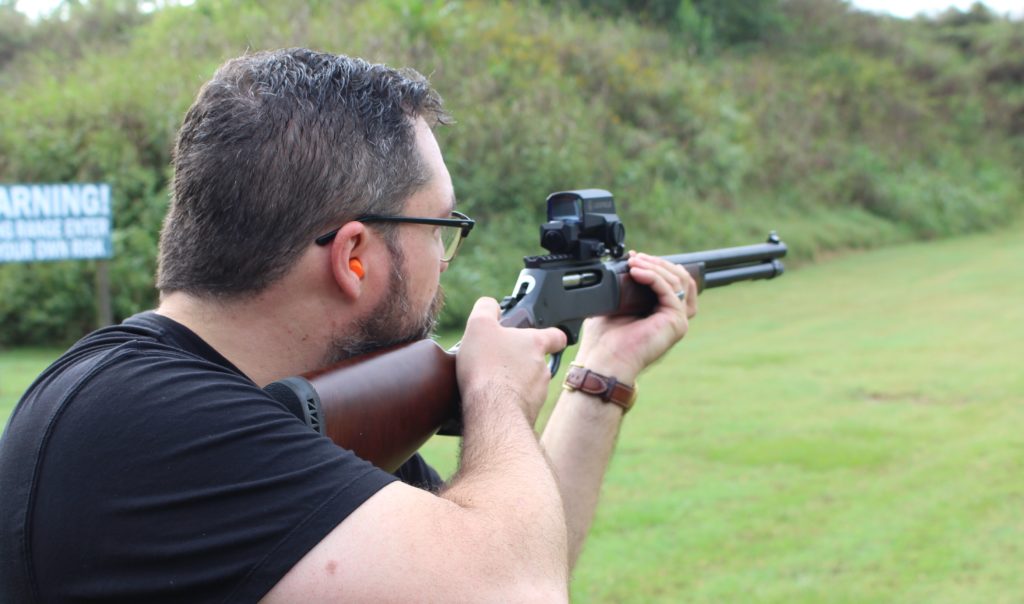 The LCO does set up high compared to a traditional optic. I like this for fast shooting as it is quick to target. 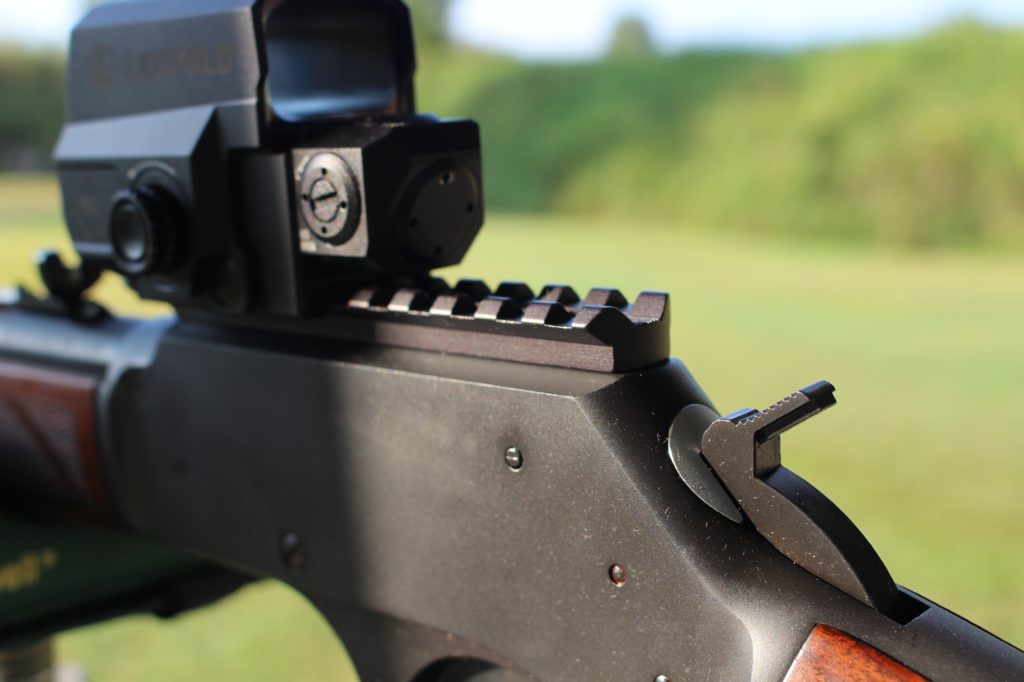 The Henry made Picatinny rail mates up perfectly with the receiver.

***Shop GunsAmerica for your next brush gun***

{ 24 comments… add one }
MENUMENU
Send this to a friend