Recently, I used a pair of Burris Droptine 10x42mm binoculars at the shooting range and in the field on a South Texas deer and hog hunt. Affordable and handy, the Droptine binoculars impressed me as a solid choice for hunters and shooters who require clear images out to 400 yards or so. 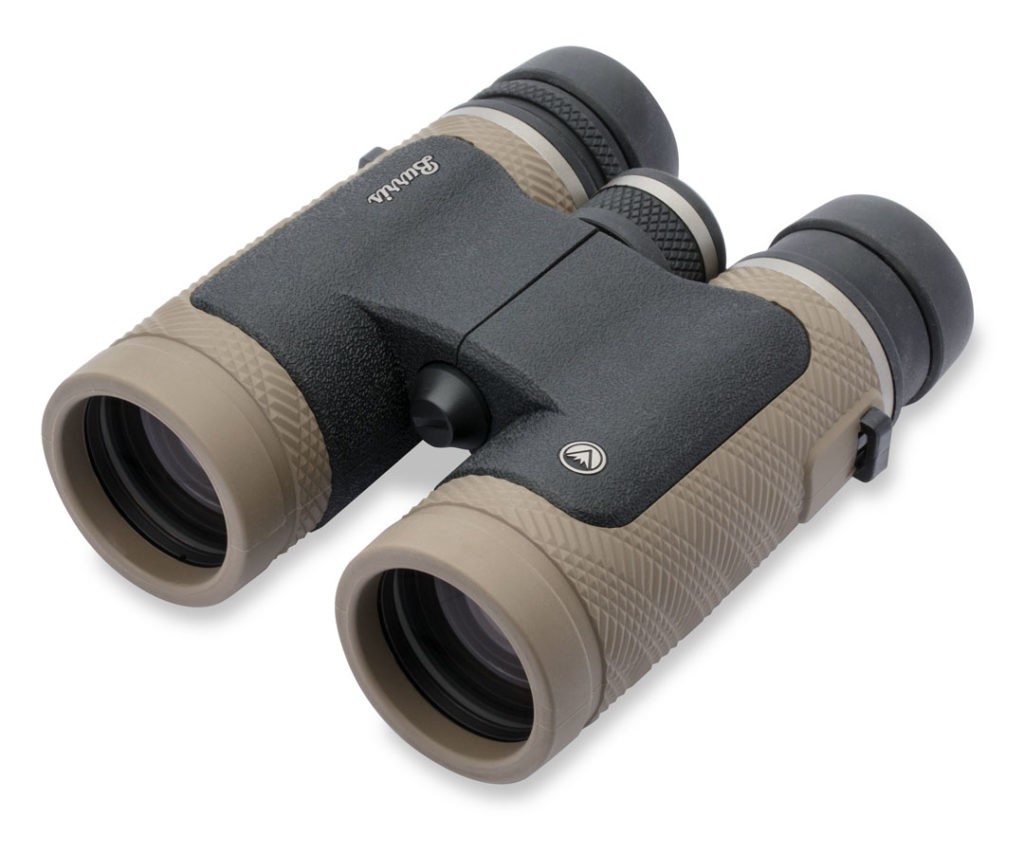 I used the Droptine 10x42mm’s for the better part of a week. A compact binocular, they fit easily into my hunting pack and on a shooting range table while I was zeroing in firearms and practicing. At just 20.1 ounces, the binos are light enough for long-term glassing, too.

At the shooting range, the Droptines easily picked out bullet holes in my paper targets at a hundred yards. And I wasn’t shooting rifles chambered in 45-70 Govt., either. Most of my shooting was with a 22 Nosler handgun, and those tiny holes still showed up clearly.

In my South Texas hunting stands, the binoculars did a really nice job of separating out various colors across the landscape. They helped me spot deer near and far in large part because the binos made the brown-gray coats of the deer stand out so obviously from the surrounding vegetation. More importantly, I was able to differentiate varying shades of brown at distance, too, and could tell when the brown was dead mesquite, an open area of dry ground, or a deer. Edges were sharply delineated, too. 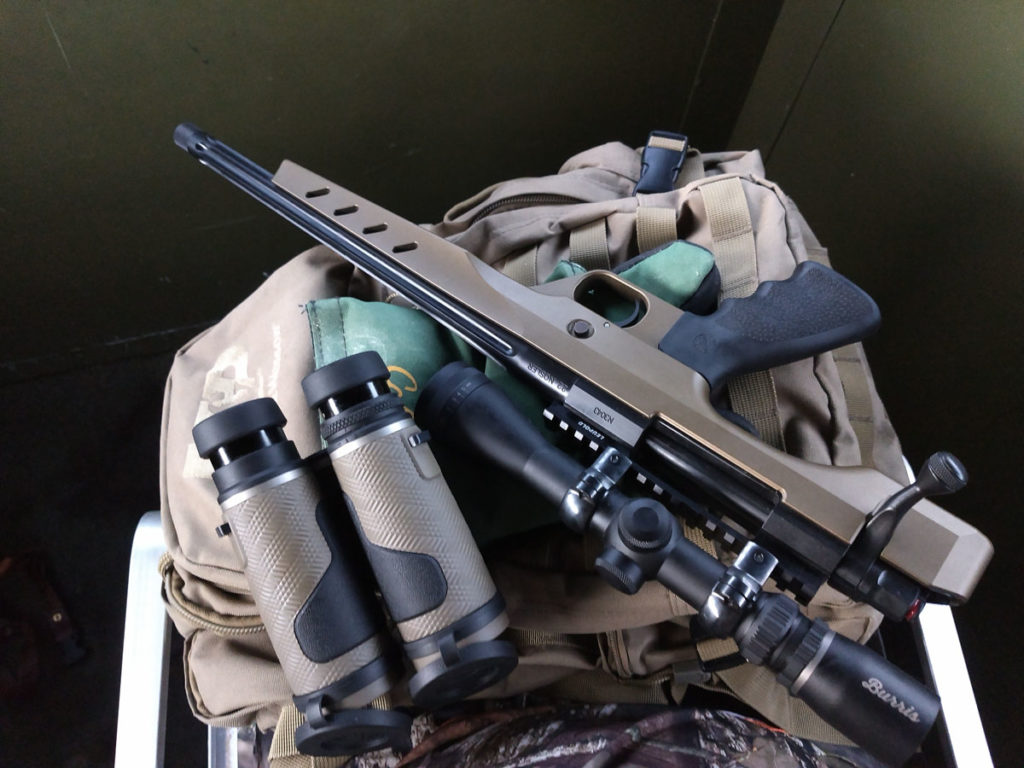 The Droptine 10×42’s provided to be effective in the hunting blind or at the shooting range.

Now, there was a distance limitation which, as noted, was about 400 yards. Past that distance, images got blurry and less distinct no matter how much I worked the focus wheel or how steady I kept the binoculars.

Given this, I wouldn’t recommend the Droptines for a hunt in the Western States where the distances can be so vast. Of course, millions of people hunt east of the Mississippi, in places thick with trees and ground cover and they rarely need to (or even can) see beyond 400-yards. The Droptines will shine in these hunting, scouting and recreational shooting conditions.

I could see right up until dark with my Droptines, and actually several minutes past dark. Pre-dawn in my various hunting stands, the Droptine let me figure out the surrounding landscape before shooting light.

A raised, weave-like texture on the binocular housing was very tactile and provided a superior grip, even when my hands were wet and dirty. 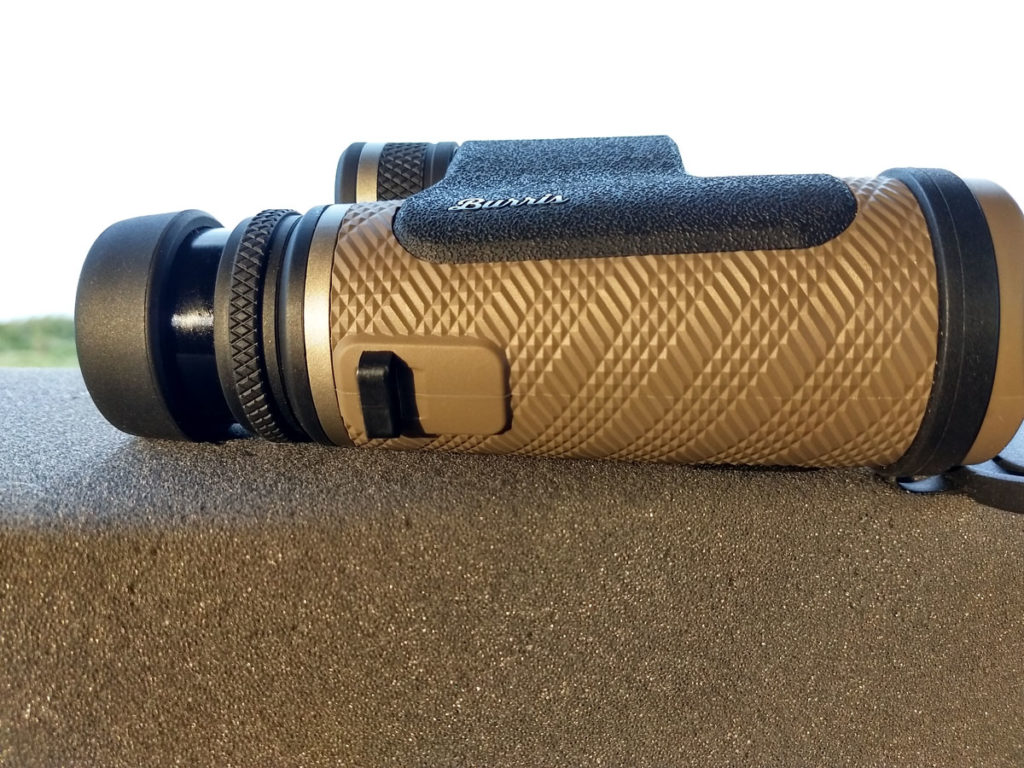 A raised, weave-like texture on the Droptines provided a no-slip grip.

I found the center focus wheel a little stiff and it didn’t loosen up despite all the use I gave the binoculars. That’s a small thing. Yet, especially when you must do a one-handed glassing for whatever reason, a smooth-operating focus wheel knob is a real help.

On the plus side, the binocular end caps actually stayed on. Yes, even when pulling the Droptines out of my backpack. The eyecups rotated easily, too.

Burris covers the Droptines with the company’s “Forever Warranty.” Essentially, if any Burris optic you own is damaged or defective, Burris will replace—no warranty card needed, no receipt required. And the warranty automatically transfers to future owners.

The Droptine are also available in an 8x42mm option.

On their website, Burris lists the suggested retail of the Droptine 10x42mm binoculars at $299.  A quick web search found them for $20 to $50 below that price. That’s a pretty good deal, I think, for a pair of binoculars that will assist you at the range and help you to consistently spot game animals in the field. 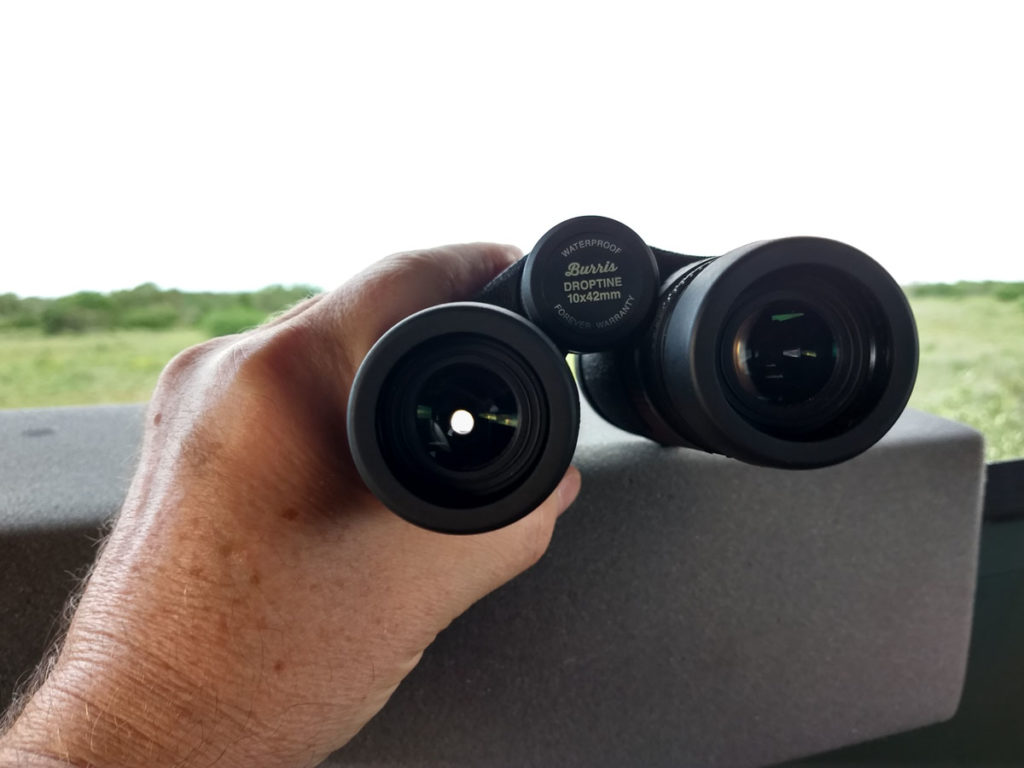 Though the focus wheel was a bit stiff, the Droptines represent an excellent value, especially for the Eastern hunter.

***Shop GunsAmerica for your next binoculars***