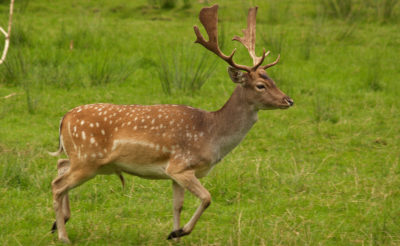 Bucks were Peter Yang’s inspiration that led him on a 9-year quest to find two genes that are tied to bone tissue growth. (Photo: Wikimedia)

One Stanford University School of Medicine’s researcher’s curiosity may lead to breakthrough treatments for bone injury and diseases. It all started with a trip to the Denali National Park in Alaska.

The researcher, Peter Yang, was fascinated by the fact that deer antlers – bones with both circulation and nervous systems – grow more than half an inch per day, fall off annually and regenerate the next year.

“Deer antlers are bony structures that re-grow at very high rates, making them an attractive model for studying rapid bone regeneration,” said his team in the published study.

“Deer antler formation shares similar biological mechanisms with human bone growth, but deer antlers grow much faster,” said Yang to the Science Times. He hopes this research will lead to treatments that “reproduce the rapid bone growth of deer antlers in human bone.”

Antlers can make up over a quarter – up to 28 percent – of a deer’s skeletal weight – with some deer growing antlers that weigh well over 20 pounds in a couple of months.

Deer antlers and human bones form using the same process, but a deer can grow as much antler in a day as a human can a femur in a whole year in puberty. If we can reproduce even a fraction of that kind of bone growth we could use it to seek treatments for diseases like osteopathy and rapidly treat traumatic skeletal injuries.

Scientists were aware that at least two of the genes Yang studied were involved with human bone tissue growth and formation, but not entirely how. By studying farm-raised dear from a young age, even in-vitro, they found the genes linked with bone growth and antler growth.

Following up in the lab, Yang found that the same genes were active in mice as well.

The genes, uhrf1 and s100a10, influence bone growth and tissue mineralization, respectively. In the lab Yang demonstrated that mice with their uhrf1 suppressed showed slow growth, and that mice with a boosted s100a10 showed very rapid tissue calcification.

By limiting their focus to just two genes, the researchers were able to strongly associate their links with bone tissue growth and formation. As mentioned, other studies had evidence that these genes were involved with tissue formation, just not quite how.

While the promise of treating diseases and mending broken and even lost bones is still far away from this – regrowing lost limbs even further away – this is a promising path to treating some of the most painful injuries and illnesses out there.