2:52 PM, a couple miles west of Brady, Nebraska, and I less than three hours away from a hearty serving of Tag Soup.

I was on Day Five of a November 2018 deer hunt in Nebraska’s Lincoln County, and though I’d put in many hours I hadn’t seen a buck of any size—antlers or body. My hunting was along Platte River bottomland, on a large farm leased by my friend and outfitter, Tim Clark, owner/operator of Red Dog Outfitters www.reddogoutfitters.com. 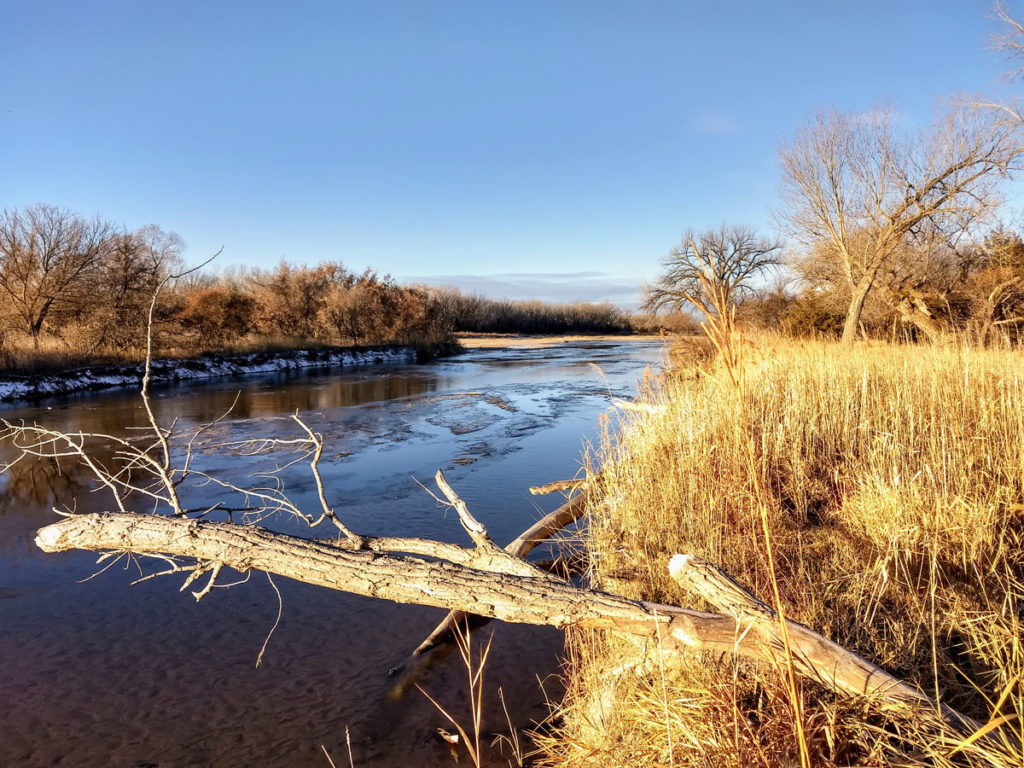 The Nebraska countryside was a mixture of cut-over cornfields and river bottoms of tan brush and tall cottonwoods. I’d hunted out of tree stands and pop-up blinds, in temperatures ranging from single digits in the mornings to the low-60’s by early afternoons. I’d spotted a fair number of bucks, small sixes, and junior four-pointers, a couple of spikes, and what I think was a young eight-pointer my very first morning who trotted on by and disappeared.

Lots of does, and I was happy to take a couple. The owner of the land had encouraged me to do just that, well beyond legally filling my deer tags.

“Kill every deer you see,” he told me. “They’re eating all my corn!”

My original deer tag gave me one white-tailed deer of either sex. I was holding out for a buck. Then, the evening of Day Four of the hunt, I jumped online and bought an extra antlerless tag. This allowed me to take two does.

But all this paper was looking pretty useless as the digital clock on my cell phone counted down on the very last evening, of the very last day, of Nebraska’s November firearms season.

That evening, my blind was set up on a small rise just off a cut-over cornfield. The deer came out of the cottonwoods to my left and into the field, anywhere from 50 yards to 600 yards away. 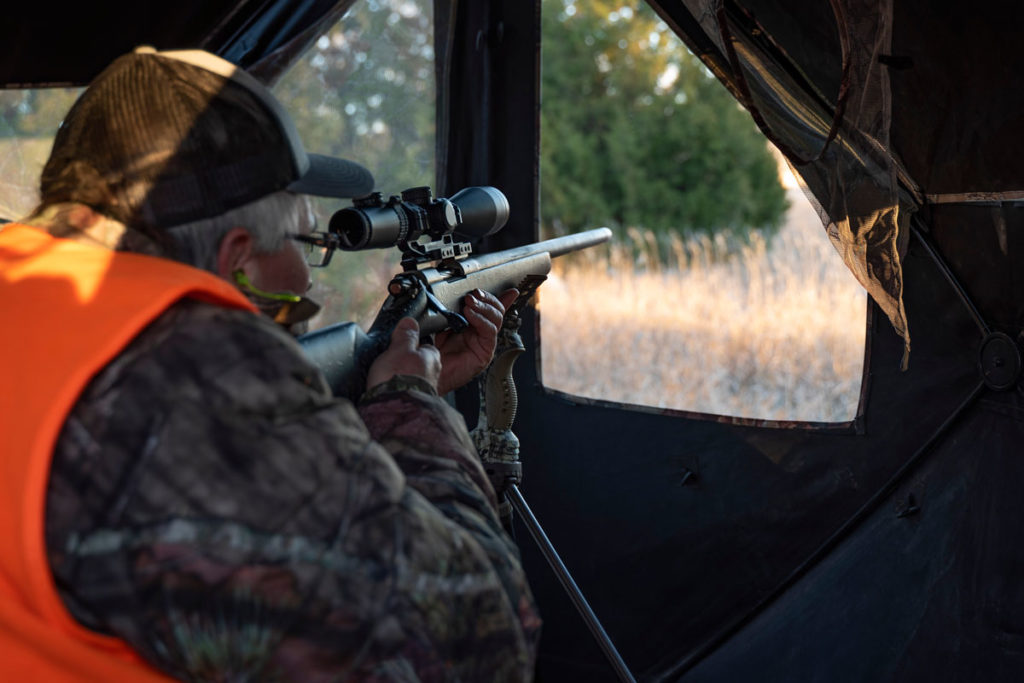 A hunting blind with a view, set up near a cut-over Nebraska corn field.

At 3:20 PM that last day, I caught movement along the brushy field edge maybe 100 yards away and shifted in my blind chair to get ready. Out popped two midget deer. They didn’t have any spots, but that’s about all these Bambi look-alikes were missing. They grazed a bit among the corn stalks, then chased each other around in circles before they headed back into the trees.

Then I made the big mistake and opened up Facebook on my cell phone. Apparently, dozens of my Facebook friends had just bagged Boone and Crockett-sized bucks, big smiles on the faces of these hunters.

I wasn’t even thinking about deer hunting in Nebraska until late September when my friend Tim Clark mentioned he had leased property in the state holding some really large deer, and the non-resident tags were quite reasonable. Like $242 plus another $25 for a habitat stamp.

So, I got to work and was able to convince Christiansen Arms, Trijicon, and Barnes Bullets to stake me for the hunt.

I arrived in Nebraska the afternoon before my hunt started, checked out the property with Tim and then had dinner with one of Tim’s other hunters. This guy was heading home the next morning and showed me cell pics of the deer he’d bagged two days earlier. Ten points, a widespread, and a body the meat processors had weighed in at 270 pounds—field dressed!

On the same property I’d be hunting tomorrow. I was primed.

I spent the next five days hunting from blinds and tree stands. My tree stand on Morning Number Three was an experience. The wind gusted to 25 miles per hour with the wind chill in the low single digits, which had me pressed up against the trunk of the large cottonwood the stand was mounted to, trying to block the wind. I made three hours, saw two small does, and got back to my vehicle feeling like a popsicle. 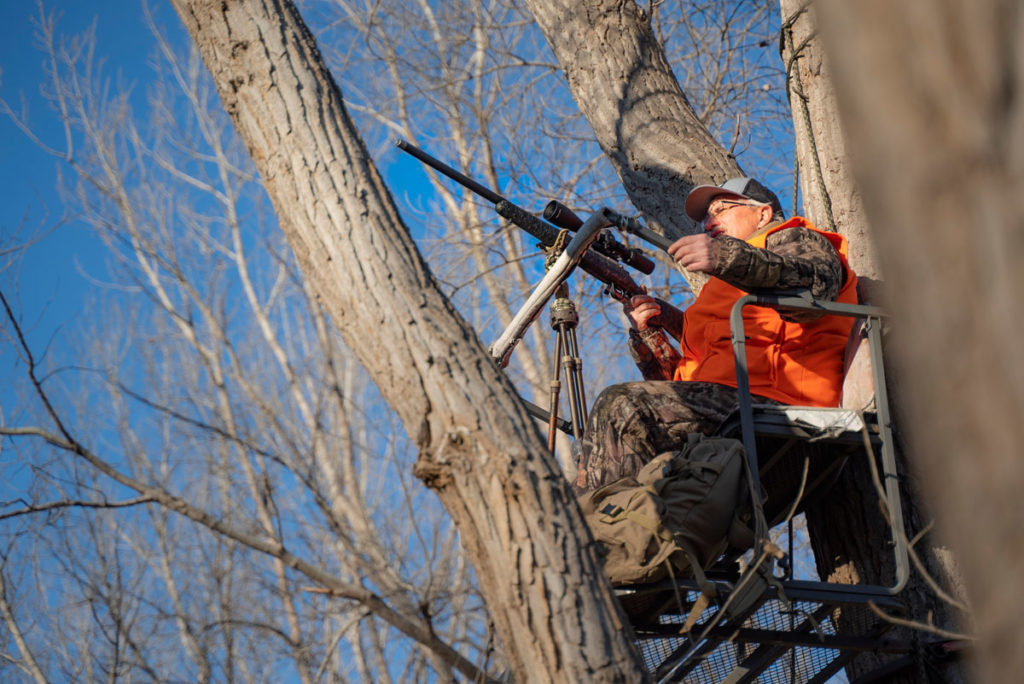 McCombie trying to keep warm in a tree stand, the wind chill in the single digits.

My hunting companion was Jake Dyreng, the photographer for the Christensen Arms marketing department, a U.S. Army veteran and a life-long hunter himself from Utah. Jake and I spent many hours together in those blinds, talking about guns and hunting in low voices.

I was hunting with a Christensen Arms Ridgeline rifle in 6.5 Creedmoor, 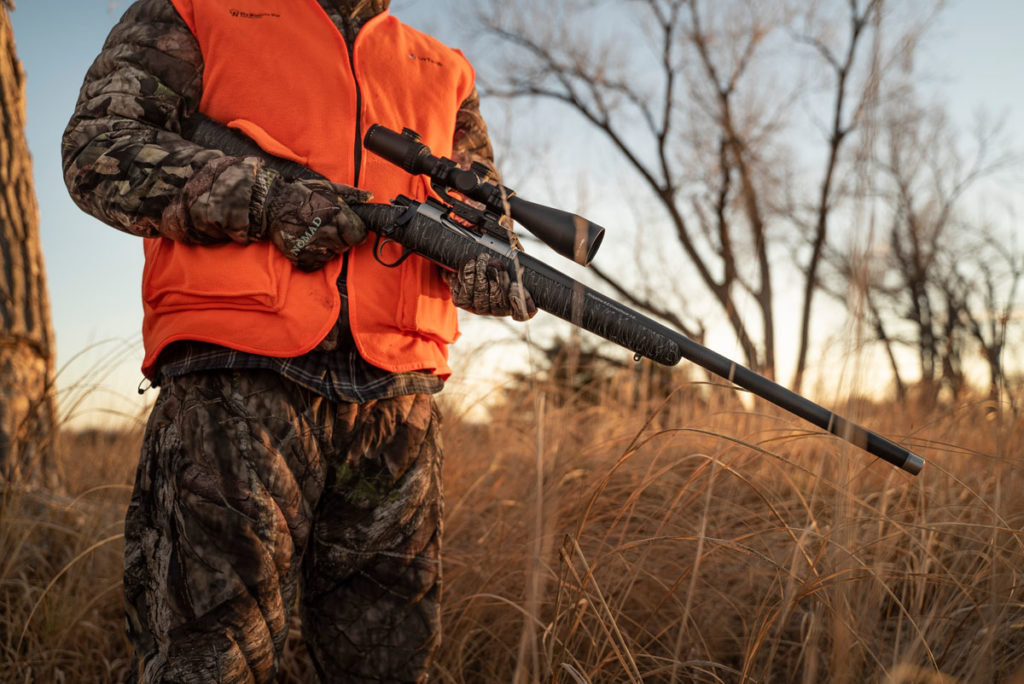 For this hunt, McCombie used a Christensen Arms Ridgeline chambered in 6.5 Creedmoor.

The Trijicon AccuPower 4-16x50MM allowed McCombie to see well enough to make an ethical shot right to the end of legal shooting time, 30 minutes after sunset.

Back home at my local range, the Ridgeline had printed sub-MOA groups with Barnes VOR-TX 6.5 Creedmoor ammunition, a hard-hitting and very accurate round I’d used on a number of successful hunts. 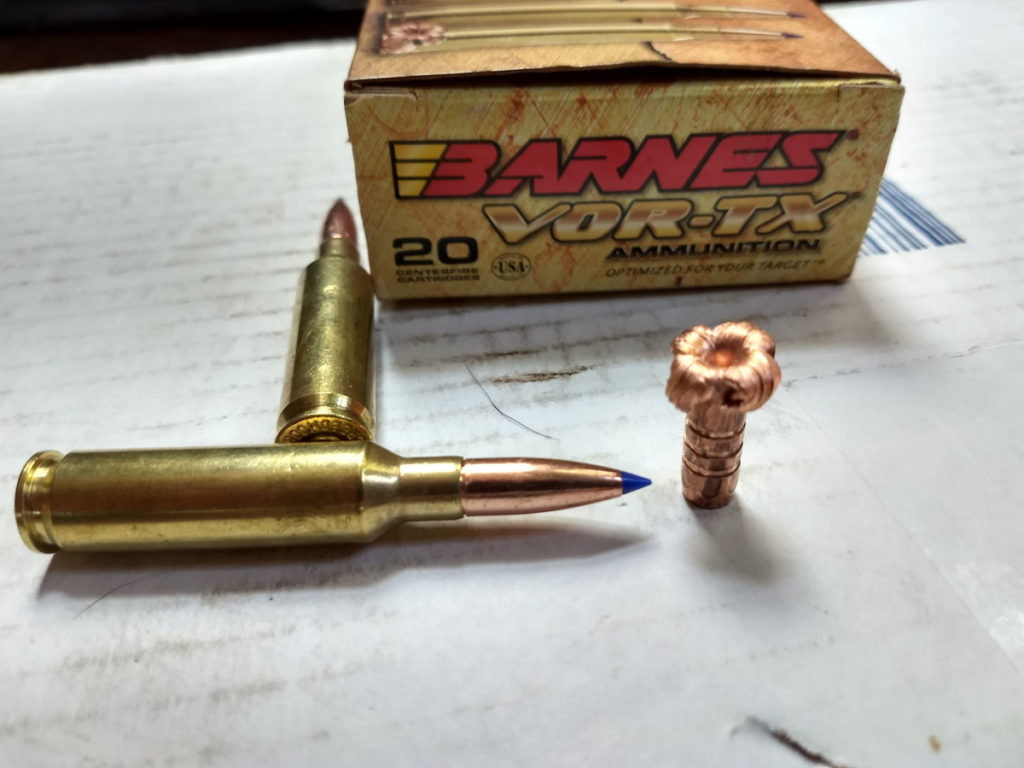 The Trijicon glass was first rate. It would easily take me to sunset and the 30 minutes I had after that to legally take a deer, pulling in and amplifying light.

Maybe two minutes after the midget Bambi’s headed back into the woods, a deer stepped out of the tree line at about 200 yards. He seemed to look right at the bind. Spike or fork? He had a larger body than a doe but didn’t seem to have the bulk of a mature buck.

I got on the rifle, but he turned and popped back into trees before I could get a good look at him in the Trijicon.
At about 4 PM, flocks of crows began flying in from East.  One flock would appear, swirl over the cornfield for a minute, then disappear, soon replaced by the next flock. I immediately disliked the noisy, blackbirds. Spies from Mordor, I was certain.

I couldn’t take it any longer. Those crows had pushed me over the edge and this kind of stress required cinnamon and sugar; I broke out my box of Hot Tamales. The cinnamon calmed me down and the sugar helped me focus. At least, that’s what I told myself. 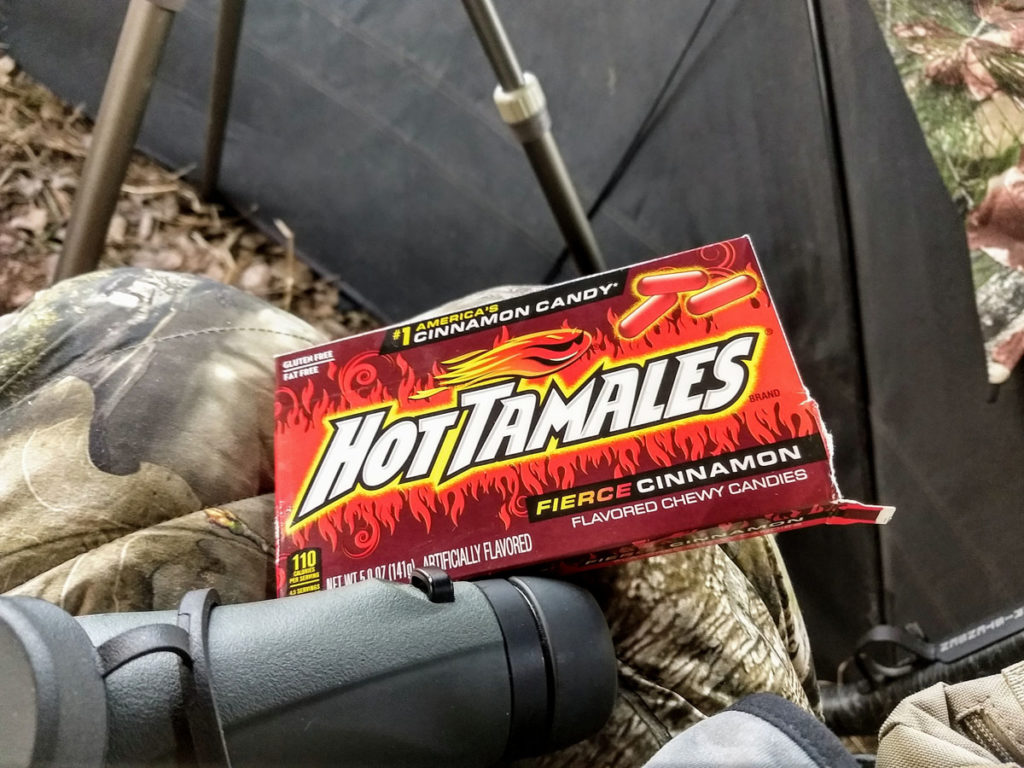 A Hot Tamales break in the blind to relieve the hunting stress!

It was now 5 PM and Serious Time. I wasn’t going home empty-handed. At the very least, I was returning home with a load of meat and a nod to the conservation benefits of harvesting a doe or two.

Yes, conservation. Since its inception, the Quality Deer Management Association (QDMA) has been encouraging hunters to take a good number of antlerless deer—where populations warrant it. As QDMA has maintained, and biologists from around the nation have agreed, a healthy deer herd has a good balance between antlered and antlerless deer. https://www.qdma.com/dwindling-doe-harvest/

Just after 5:00 PM a group of deer filtered into the field. I ranged them at 320 yards, and my binoculars revealed two very good-sized does.

The two big does grazed on the other side of a screen of tall corn stalks the farmer had missed. I got my Ridgeline into a solid shooting position, adjusted my Trijicon, and waited for one of the does to step into an opening. One finally did. I held up on her heart-lung area by 3 MOA, let out my breath and squeezed the trigger. She dropped, falling onto her back legs and disappeared. 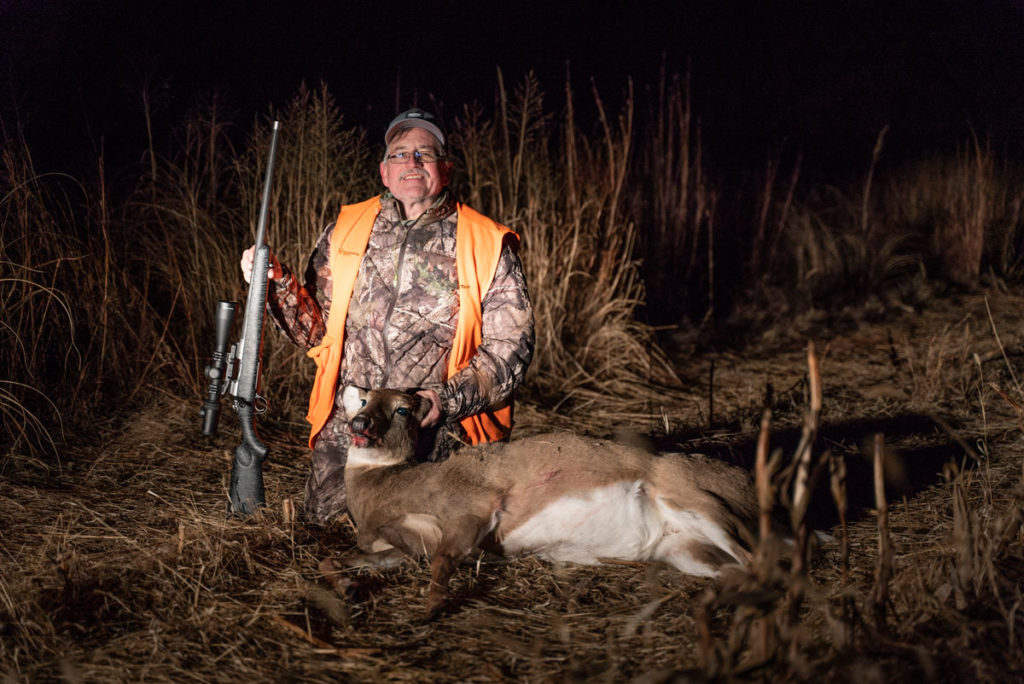 McCombie and his Plate River white-tailed doe, taken at 320 yards with the Christensen Arms Ridgeline rifle.

I kept the scope on her location, but she never got back up.

Ten minutes later, a buck came to the field edge at maybe 80 yards away on my left. He had eight points, and a high, narrow rack. But he was stout-bodied, certainly no youngster.  Yes or no, 30 minutes left…

Heck with it, I told myself. He wasn’t a giant, but he was a lot bigger than the doe I dropped.

I already had the Ridgeline on the shooting sticks. I shifted in my chair for the shot, but just as I got behind the scope the buck jumped the fence and trotted for the trees. By the time I found him in the Trijicon, all I could see were his antlers moving through the brush.

Come on, I said to myself, just step into an opening, turn back for a few seconds, clear some brush and give me a view of your body. Instead, he bee-lined it for the trees, dropped down onto some lower ground and I never saw the antlers or the buck again.

I had about 25 minutes of legal shooting time and I spent it glassing that tree line, hoping the buck would return and mentally kicking myself for not getting on him faster. And then it went completely dark like a light switch had been flipped to “OFF.”

Jake and I closed up the blind and made our way to the doe. She was 4.5 years old, the state biologist at the check-in would tell me the next morning. Field dressed she weighed just shy of 120-pounds, the guy at the meat processors said.

My trophy? A YETI full of organic venison, plus half of another smaller cooler with more venison. No buck, but instead of tag soup I’d be eating steaks and roasts and ground venison. Literally.

All in all, a fair deal and a successful hunt. Though I still wish that eight-pointer had given me ten more seconds! 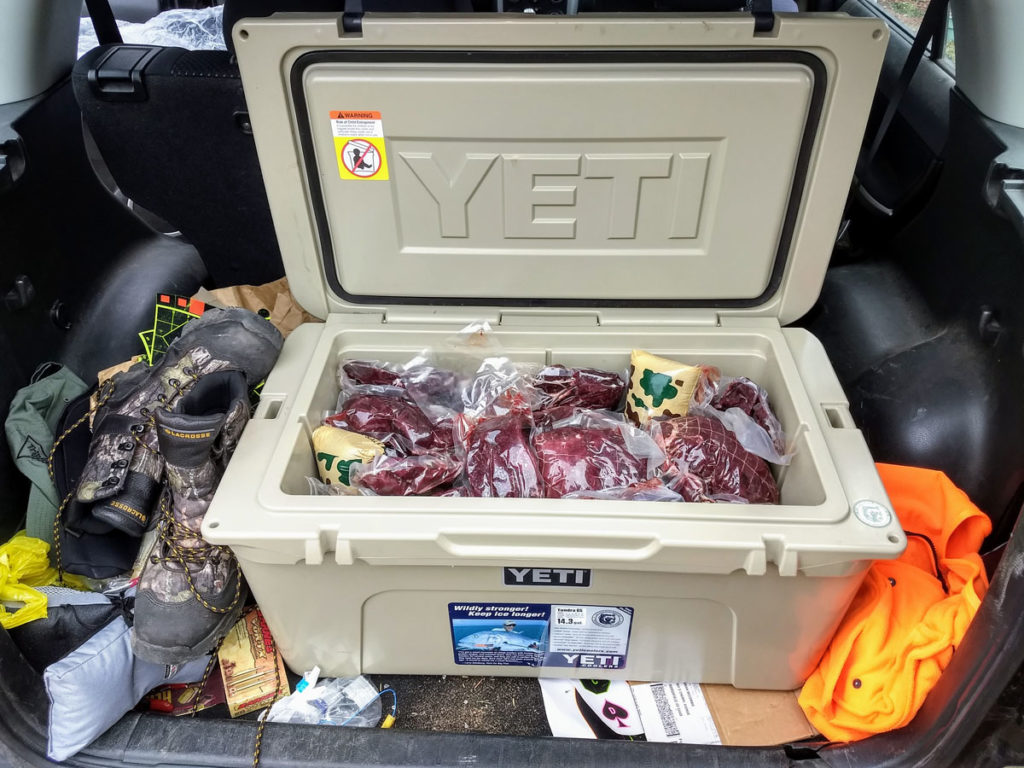 The real trophy: many meals of organic, white-tailed protein.