I have spent most of my time chasing turkeys in the vast openness of the west. The first turkey that I killed was a Merriam’s and I have become partial to this subspecies because they seem to gobble at anything and the views offered by western turkey hunting are hard to beat. I have never had the opportunity to hunt the bird that over half of the country spends April and May chasing, The Eastern.

I had an opportunity to go back East this spring and chase the larger and more popular Eastern Turkey. I found myself on an Indiana family farm in late April. The Indiana turkey season opens up much later than most midwestern states. Their season usually opens up the last Wednesday in April, with other neighboring states opening up in early to mid-April. This had me concerned. I was worried that all the hot action associated with early April turkey hunting would be flamed out and I would be hunting silent birds.

It was going to be a hard hunt to begin with, I was sandwiching this hunt between two tight business commitments and only gave myself a long weekend to hunt and with little scouting done on the property, I figured that the first day was going to be devoted to getting the lay of the land.

The farm that I was hunting was a small flat top farm that sat on a natural bluff in the middle of thick woods. The fields on top quickly dropped away into hardwood bottoms that would be hard to get through quietly. 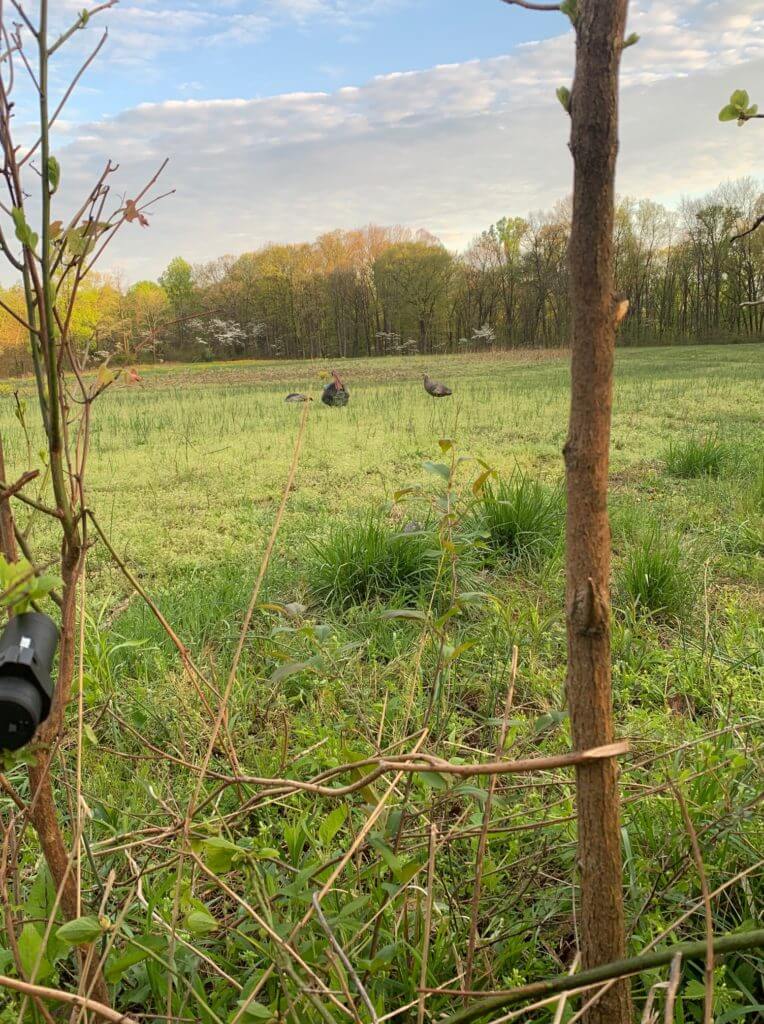 The small decoy spread that eventually captured the attention of the gobbler, Just a Jake and a hen

The first afternoon I arrived on the farm, I tried to get out and roost some birds. As I entered the field I used my binoculars to spy across the green pasture to see a couple hens out feeding. There was not a gobbler to be heard or seen. I let out some locator calls, first a crow, then a duck and finally an owl, I was met with silence.

It appeared that my fears had already been realized, the gobblers had gone silent and I figured that this was going to be a bushwack hunt from this point forward.

The next morning, I made it out to where I had seen the hens the evening before, well before sun up. I set out a small decoy spread and nestled into a thicket that would provide cover. As the blackness of the night turned into the grey of dawn I again tried a few locator calls, with absolutely no response from a gobbler. I did manage to call in two owls that decided to sit in the tree above me and have a very loud conversation, this only made it more difficult to listen for what was going to prove to be an elusive gobbler.

With no response from any roosted birds I decided that I would wait until the sun came up before moving into the timber, so that I could see where I was going. Just as I was planning my next move the forest erupted.

As soon as the clock struck 6:28, it seemed like every turkey in the woods that could gobble, did gobble. It went from complete silence to a cacophony of turkey noises. I immediately became excited and resisted every urge that I had to call to the birds on the roost. I have seen and done this before myself, and although it makes you feel good to make a turkey gobble it always seems to make for a bad ending. 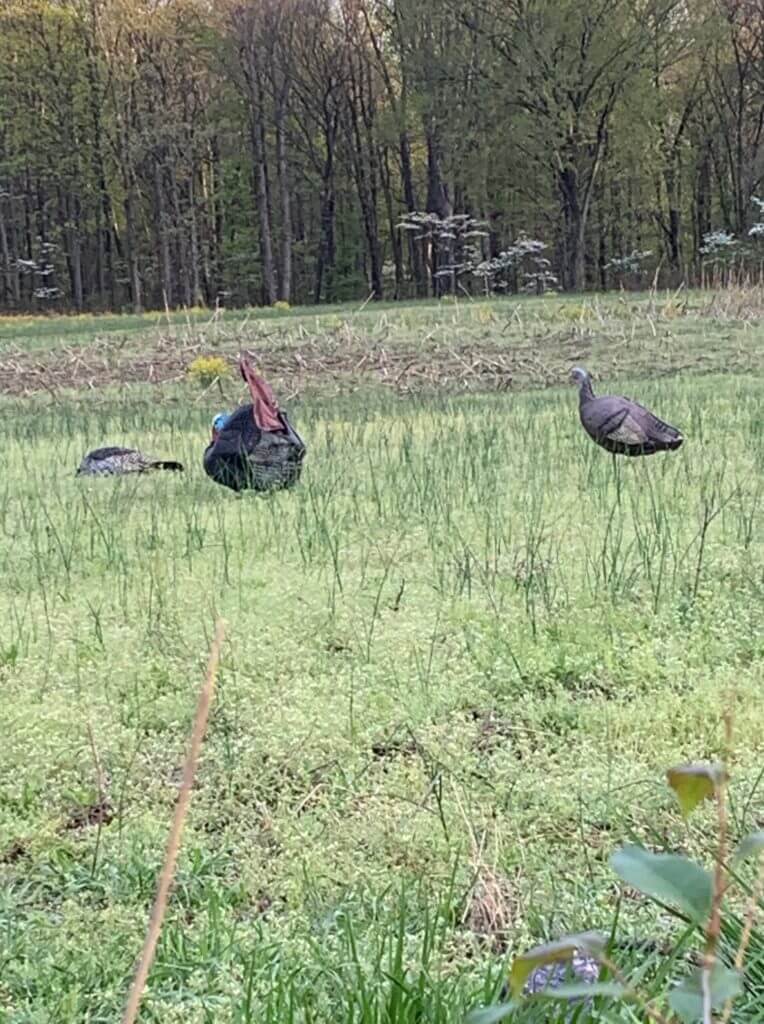 As I sat there waiting for the birds to leave the roost, so I could call.  I couldn’t help but think of all the things that I had heard about Eastern turkeys; they were quiet, crafty, finicky and overall the hardest of the subspecies to hunt.

At that moment I was thinking that all of that was false and I was only minutes from having a big boss tom in my face.

Shortly after 7 AM when I knew for certain that the birds had flown down, I began calling. Nothing crazy just a few hen yelps to let the boys know that I was in the neighborhood. I was met with silence. I waited for a few minutes and then tried again, this time with a few more excited hen calls and a little bit longer sequence. Still nothing. I couldn’t believe it, I felt like every bird that had been gobbling non-stop just minutes earlier had disappeared. Just as I was becoming depressed about this, I heard the thunder of a shot from the neighboring farm. At that point I had convinced myself that hunter had shot the only bird in the state of Indiana.

For over an hour after sunrise the only thing that I heard was a gobble that sounded so far away it could have been in Illinois. I was continuing to call every 5-10 minutes, but still with no response. I was just getting ready to stand up and pick up my decoys to head off and explore the hardwood bottoms hoping that they might offer more luck than this green pasture. When all of the sudden I looked up and there were two strutting birds 200 yards away from me down the field.

It was like they had just materialized out of thin air, they were completely silent just strutting. I let out a soft yelp to get their attention. It was like they didn’t even hear me. No gobble from either bird. I yelped again and this time one of the birds stuck his head up and looked in the direction of my decoys, but still no gobble. He had obviously heard my calls, because he made the turn and he was marching his way across the field toward my me.

I decided to be quiet, it was obviously this guy liked the silent treatment. He was on a string, walking a few yards at a time, them stopping to strut, hoping to draw my hen decoy away from the Jake decoy that was holding his attention. He started slow at first making his way the first 100 yards across the field in about 10 minutes. Then it seemed he had reached the point where he couldn’t take it anymore, once he was within 80 yards of the decoys he broke strutt and began running at full speed into the spread. 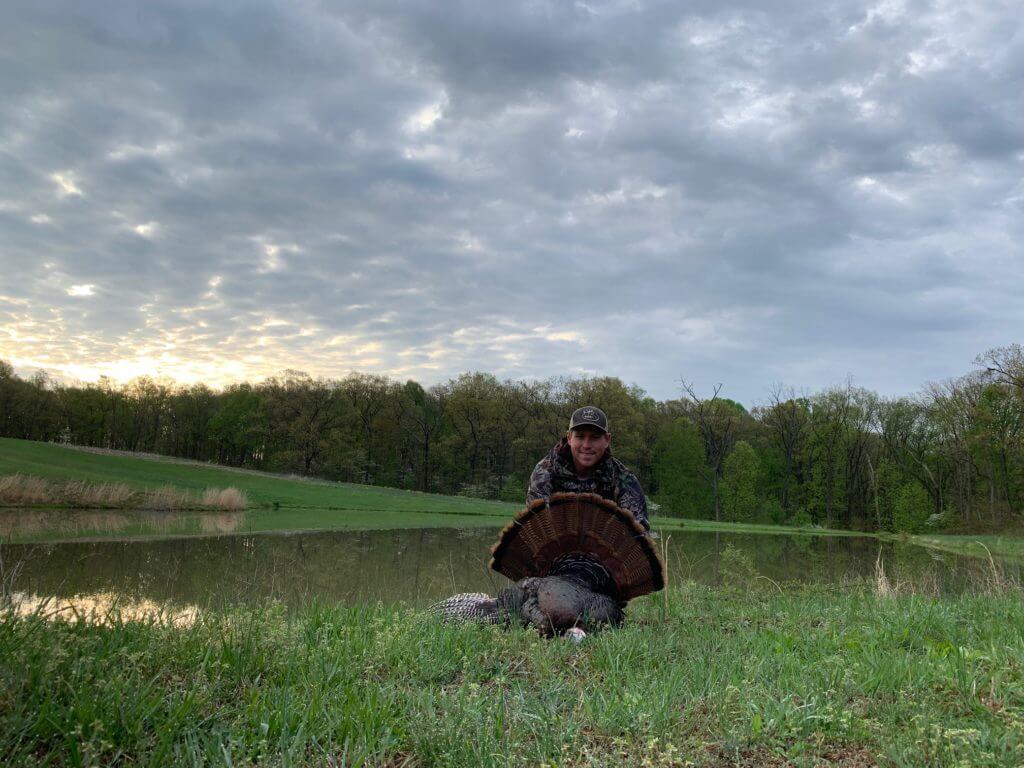 The great Eastern Turkey that I had the pleasure to take in Indiana, truly a challenging animal to hunt. 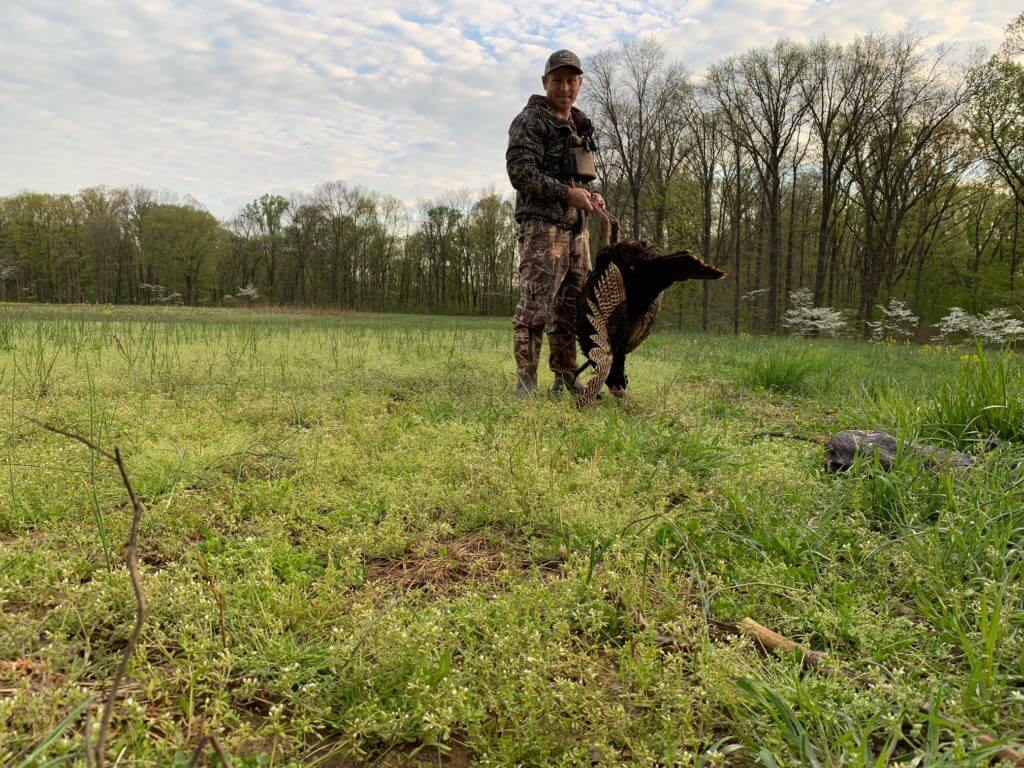 He reached the Jake decoy and proceeded to beat the living hell out of it. Spurring it and pecking it on head. He was well within range, but I was so enthralled with this show that it didn’t even occur to me to shoot. I have had many Merriam’s come into decoys, but I have never had one put on such a display. 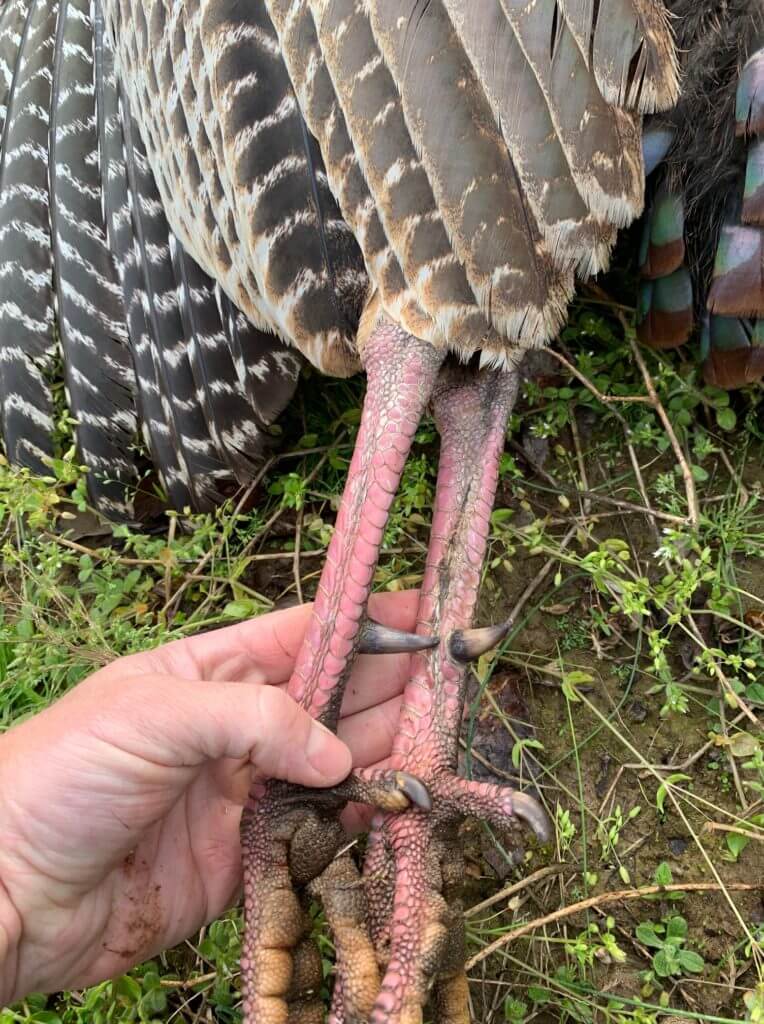 The hooks and the size are very impressive when compared to its smaller cousin, the Merriam’s. I have never had spurs that would let a bird hang. 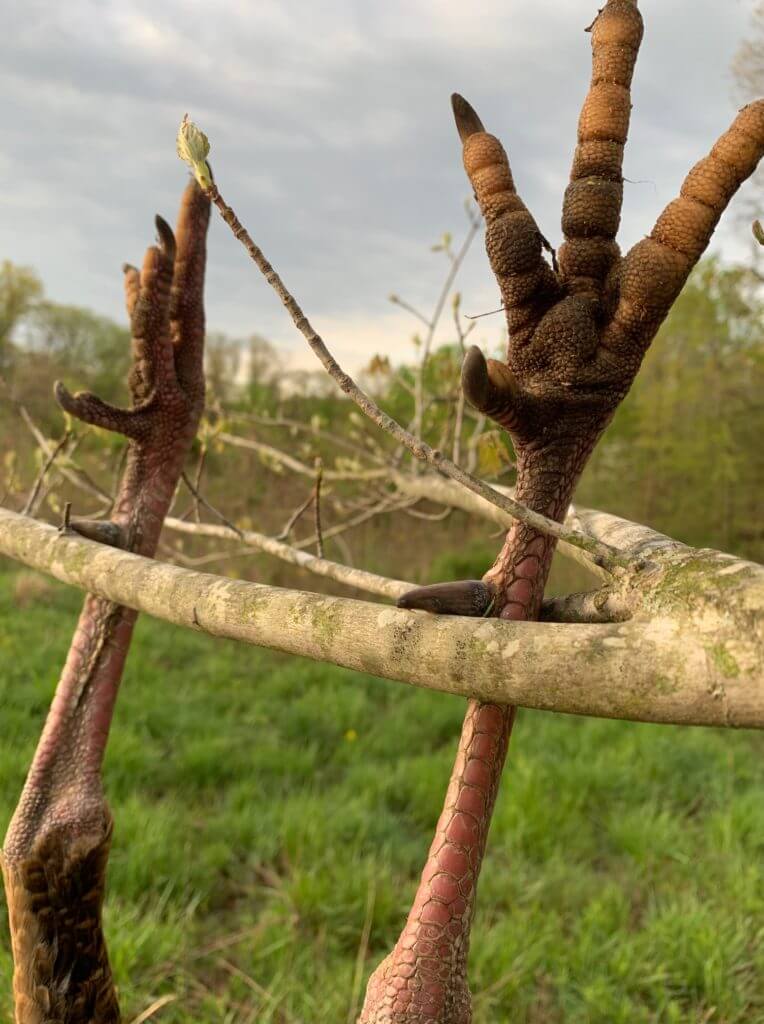 Finally it seemed that he was tiring of the fight, and I raised my Benelli Super Black Eagle, Loaded with Federal Premium TSS 6’s and let the old gobbler have it. The shell and gun where right on the mark, stopping the bird in his tracks. It was only shortly after shooting him that I realized that the gunshot was the only noise that had been made in the last 15 minutes.

This gobbler strutted and ran 200 yards across the pasture without making a sound, not even a drum or spit. He simply acknowledged the call once with a head raise and that was it. Had I not seen it with my own eyes I would have never believed that there was even a bird interested in my calls or decoys. I can only imagine how frustrating this would have been if I had followed through with my plan of calling in the timber. I would have given up on countless setups without knowing a bird was on his way in.

I now understand why the Eastern half of the country is captivated and frustrated by this bird.

I must say that I still love to hunt Merriam’s, but the big and silent Eastern has definitely made its way up my list. I can assure you that they will be on my spring hunting radar from now on.