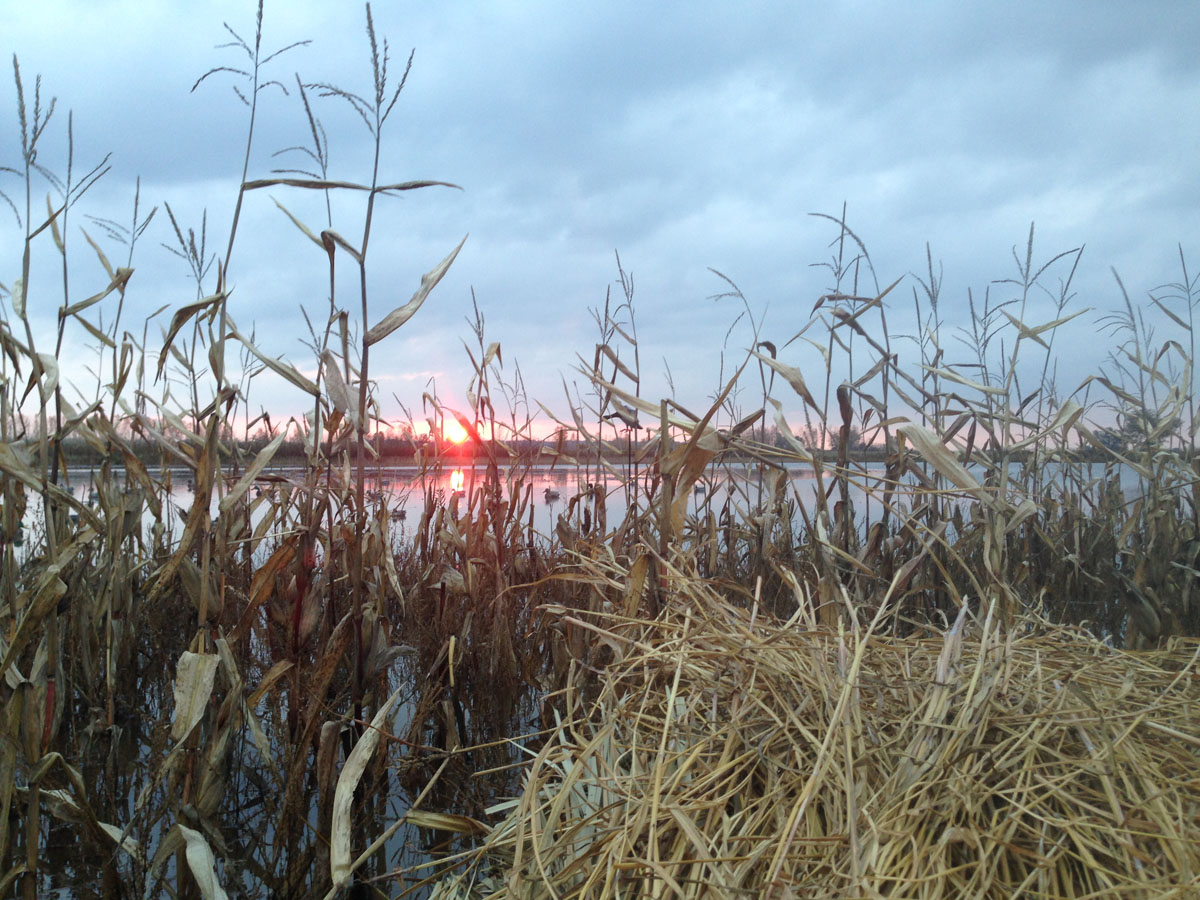 Being in the marsh with the sunrise is perhaps one of the best ways to start your day!

Many portions of the Midwest went through the summer in a drought. It’s hard to think about the waterfowl season when things are so dry. In some areas of the Midwest, moisture only returned in late September and early October. We can only hope more weather is on the way. 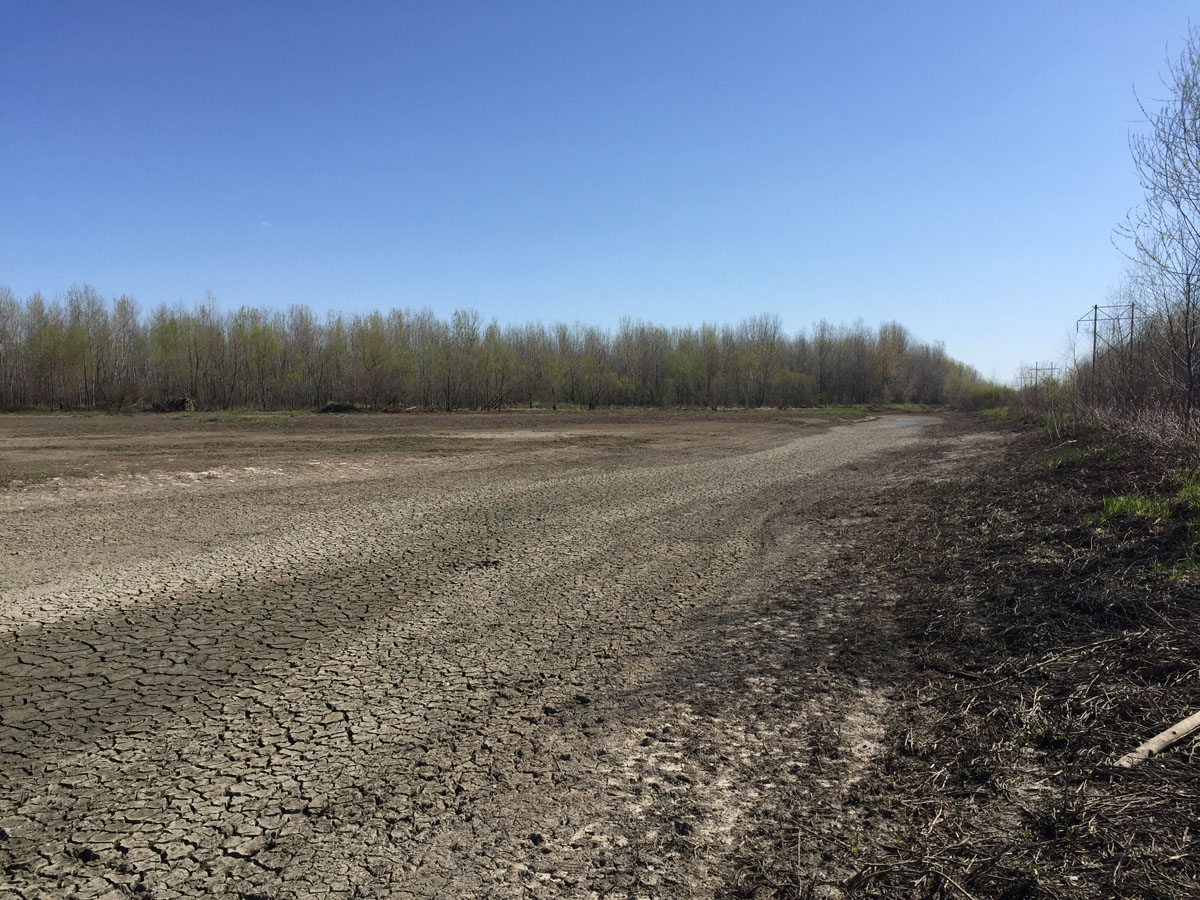 We had a heck of a drought in many areas of the Midwest. However, some areas were not impacted.  Dried out marshlands by early spring left little food for reverse migrating ducks and geese.

Weather is so much a part of waterfowl hunting it cannot be overlooked. Some hunters take it as it comes, but others know the weather well before they leave the house and use that knowledge to prepare and experience a great hunt. Personally, I want to know sunrise, sunset, temperature, wind speed and direction. I check every morning and eventually those that hunt with me expect me to deliver that information each day.

I know for a fact that I like bad weather—the worse the better. I appreciate those snowy north wind days, maybe spitting some sleet too just for more punishment. While I have had some outstanding mallard hunts on a blue clear day, it’s those lousy days that get me excited.

Weather, of course, has its uncertainty. Financial expert Patrick Young might have summed up weather as well as anyone: “The trouble with weather forecasting is that it’s right too often for us to ignore it and wrong too often for us to rely on it.” I see the weather in two ways: fall forecast and daily weather. Let’s take a look at both. But first our fall forecast for all four flyways. 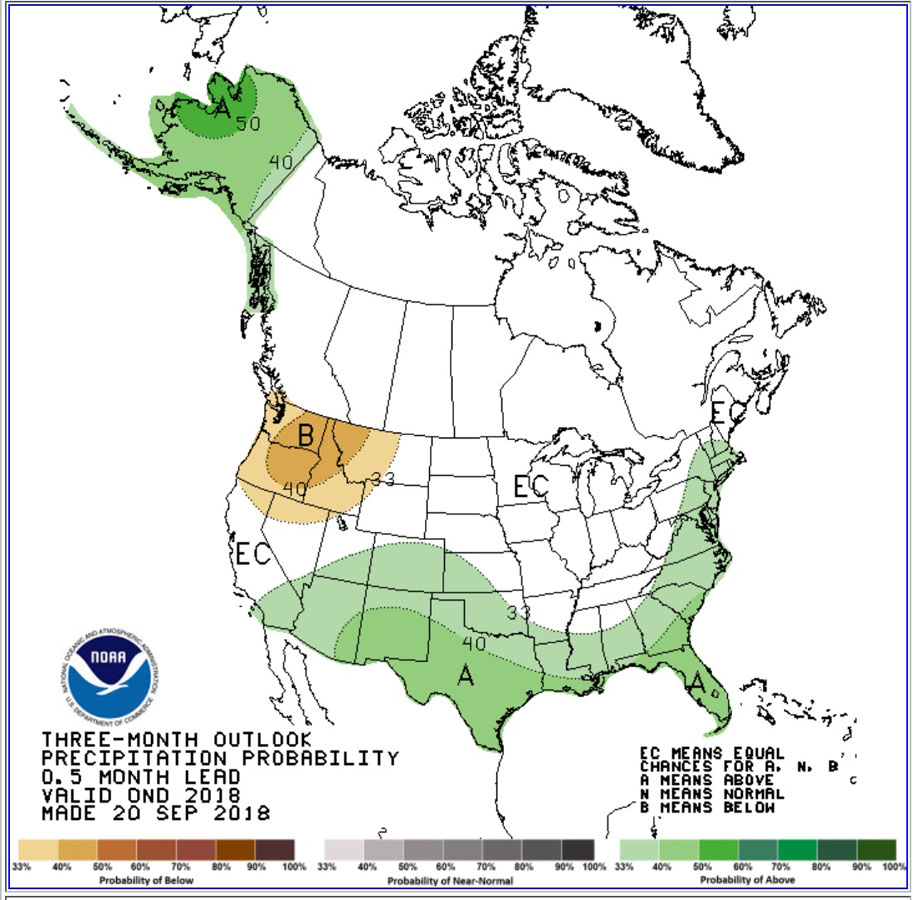 Fall precipitation is provided for the months into December. Here you can see the southern influence of El Niño. 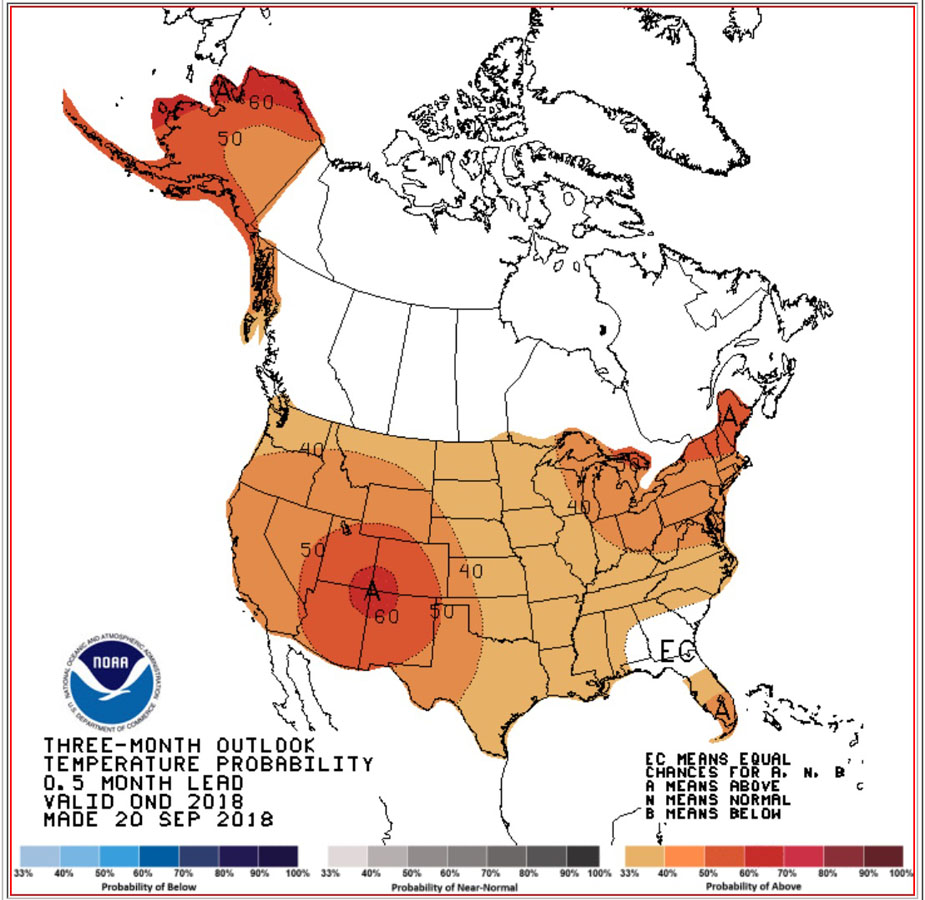 Fall temperatures are predicted into December for the continental US.  The percentage below and above are depicted in color.

The National Oceanic and Atmospheric Administration (NOAA) provides a three-month outlook for the continental United States. It breaks down the forecast into temperature and precipitation. The Pacific Flyway will have anywhere from 33% to a 50% chance of higher temperatures over the next three months. How this impacts hunting could range from having less water, to less ice, to overall migration anomalies. Precipitation has potential in the northern states to cause range from below average moisture to equal chances in the middle portion of the flyway to slightly greater chances of rain in the south portion.

The Central Flyway will also experience drier than normal conditions, while the four corners of Utah, Colorado, New Mexico, and Arizona have a big chance of higher temperatures over the three-month period. The entire flyway will be above normal for temperature from the Canadian border to Mexico. Precipitation from north to south ranges from equal chance for moisture to slightly above normal through Oklahoma, New Mexico and Texas.

The Atlantic Flyway shows the most variation in temperature across the US. Northern portions may be above normal, but Georgia, Alabama and northern Florida may experience equal chances for above or below temperatures. Rain will be above normal throughout the flyway.

It is important to understand what is the major influence on our weather this fall. El Niño, the “little boy,” is a product of the El Niño-Southern Oscillation (ENSO) with La Niña “little girl” being the opposite in making weather. La Niña, the colder temperature producing weather-maker, in at least a weaker version, was present in 2017 and into August, 2018.  A transition to El Niño is now occurring and just how strong it will be remains to be seen as it continues to grow into winter. 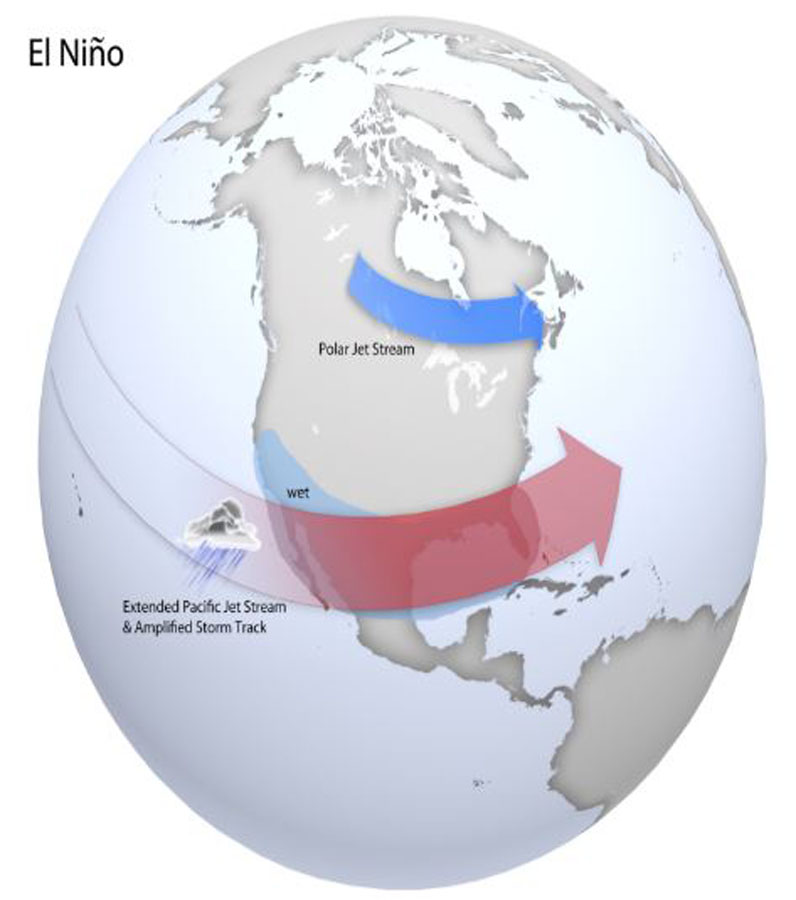 In an El Niño year much of the Southern US is influenced, but all parts of the continent are typically warmer.

The ENSO is a lateral line running across the Pacific Ocean between the international dateline and 120 degrees west. About every two to seven years changes occur in the sea-surface temperatures creating either the El Niño or La Niña effect. Tradewinds that were primarily east to west are displaced somewhat and may even reverse. The La Niña cold upswelling of air is replaced by El Niño’s warmer air, upsetting the tradewinds. The warmer temperatures of El Niño cause warmer winter temperatures and of course, affect our weather across the US and our hunting conditions.  This may be one of the most scientifically monitored natural events studied constantly.

In an El Niño year, much of the Southern US is influenced, but all parts of the continent are typically warmer.

As I mentioned I check the weather daily and use the tools provided by NOAA every day. Start with the overall forecast. You can enter your local zip code to get a current forecast. Once you get to this area look in the lower right corner for Additional Resources. Here you find the hourly forecast. It is here one can see temperature, wind, wind direction, precipitation potential, and sky cover. All are very useful tools for understanding the day ahead. You can look ahead by the hour to get your weather forecast. 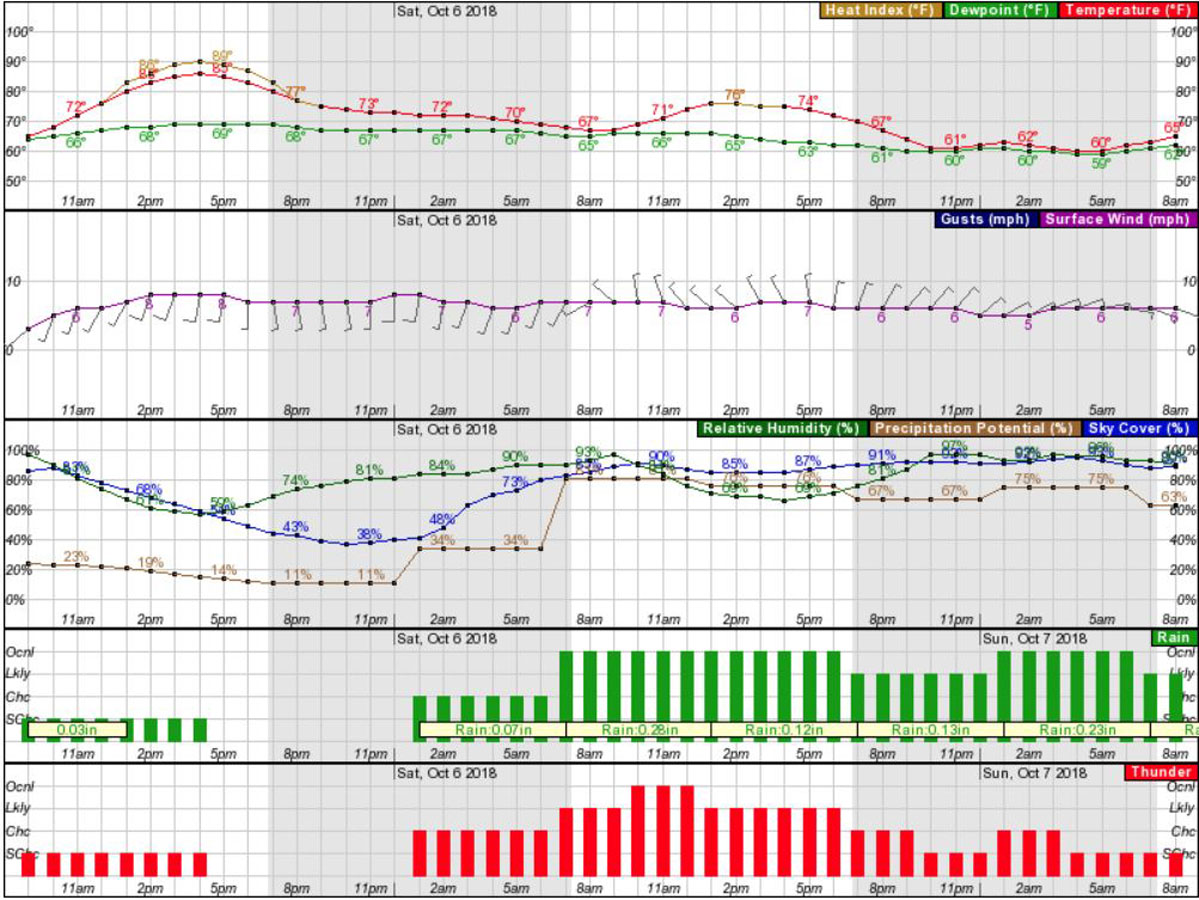 The hourly chart is very detailed giving you a play-by-play view of what you might expect. You can look ahead hours or days.

Those of you operating on the waterways outside of the marsh have another useful tool also provided by NOAA using their national observation network. Most rivers and streams are provided to show water levels and predictions for rising and fall. Consider this too as you await flooding conditions that might create even more hunting opportunities. Knowing water level and how levels affect low lands is something I am constantly watching. In fact, areas we prepare to hunt are often only opportunities if it floods. In other words, free water. 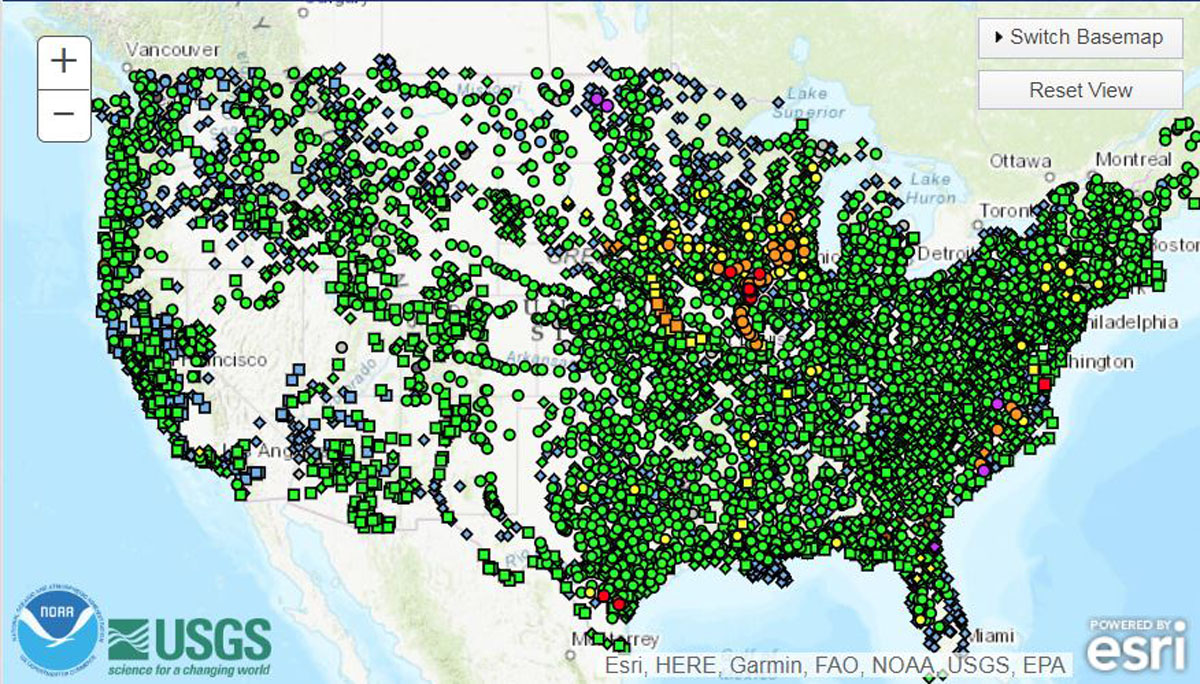 Having a detailed report available of river, stream and lake levels not only helps your preparation, but also is safety net in your go-no-go hunting decisions when hunting on water.

National Oceanic and Atmospheric Administration really do a great job for us waterfowl hunters.  We can be well prepared days before for our hunts and have a minute by minute forecast available to us 24 hours a day. Use these resources to your advantage.