Tired of the slime emanating from our nation’s capital? Then check out this story from Arkansas, where the hunting community proved once again that good people can still come together to help someone in need. 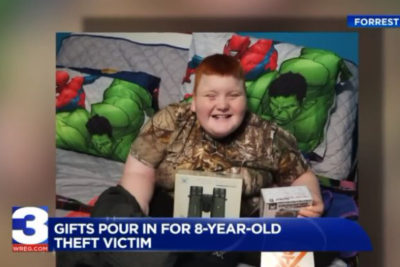 Back in December, thieves stole hunting gear from 8-year-old Jayce Collum, an Arkansas resident who suffered a life-threatening injury to his spinal cord that left him paralyzed and unable to sit up on his own. The thieves pried open the door of the specialized deer blind his grandfather had built for him and took everything, including the chair he needs to overcome his disability, local media reported at the time.

Since then, his family says the gifts have poured in from people living across the country.

“There have been several people to reach out to him to replace everything and get him to be able to hunt again,” Collum’s grandfather, Glenn Shepherd, told local media. “We’ve had people donate items worth thousands of dollars. It’s sometimes hard to comprehend that people do that.”

An Arkansas manufacturer donated a new hunting stand with a wheelchair ramp to replace the one thieves ransacked.

“He can sit just perfect and look out the window and wait for the deer to come in,” Glenn Shepherd said.

“It’s just amazing to see the love and support of somebody being able to show there is more good in the world than there is bad,” Kristen Shepherd said.

As for Collum, he plans to use his new gear as much as possible.

Since Arkansas media first reported Collum’s misfortune, the story garnered national media attention, with coverage in outlets like USA Today and Fox News. A GoFundMe page also raised over $5,000 to help Collum recover his goods and send him on a hunting trip in Texas through Texas Hunt for the Cure.

The thieves who stole the boy’s gear have yet to be apprehended.