We were a very talkative group at dinner the night before and during coffee that morning. But when the 15 of us walked into the covered shooting line and saw the steel targets ranging before us–the last row at 1,000 yards—it all went silent.

“Pick a table and a rifle,” our host Greg Ray told us. “And grab a couple boxes of ammunition. Two shooters to a table. One of you will spot while the other shoots.”

This was Day One of the Long Range Hunting Course by Outdoors Solutions: Hunting and Fishing Destinations, a Tulsa, Oklahoma-based company providing sportsmen with hunting and fishing trips. Outdoor Solutions also offers a number of long-range shooting classes designed for the hunter. 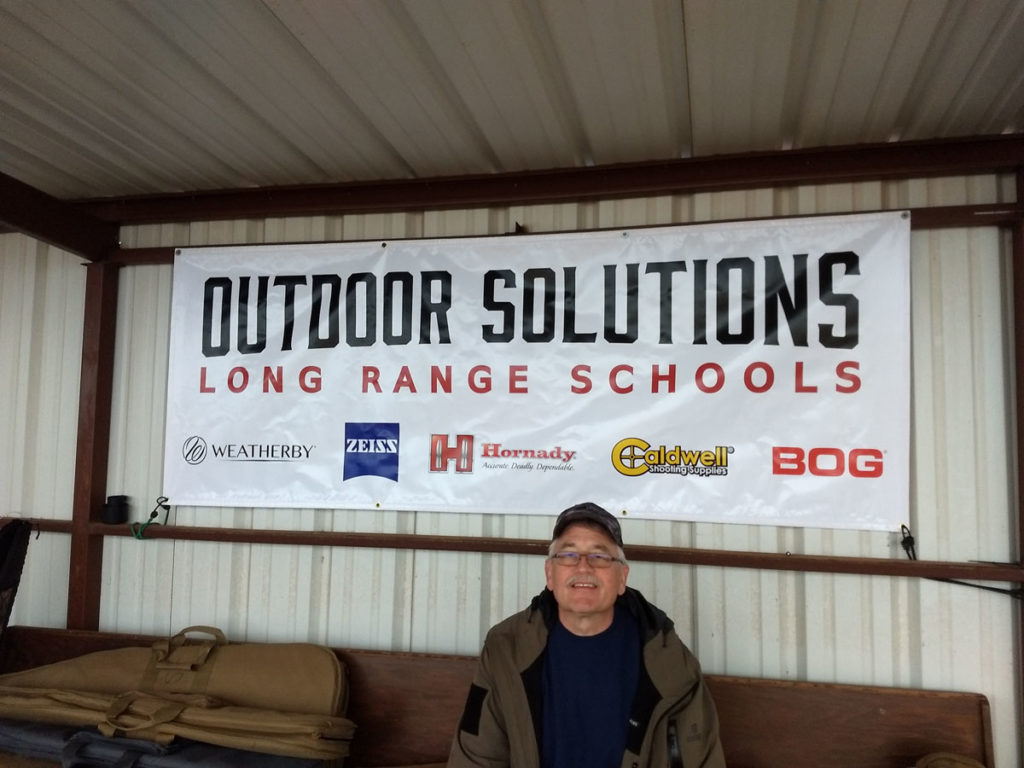 “Our long-range shooting classes came about because we recognized a need among many clients,” said Ray, Outdoor Solutions founder, and co-owner. “We had clients call us to set up that hunt of a lifetime out West, for elk or mule deer, usually. And we’d tell them, Given the wide-open spaces you will be hunting, you need to be able to make a shot out to 400 yards.”

Ray continued, “We’d usually get one of two reactions. Either the client would go silent or he would say, ‘400 yards? Are you crazy? I can’t make that shot!’ Most of these hunters were from the Midwest or the East, and their standard shot on a game animal was 100 yards or less. If they were going to spend that kind of money on a guided Wyoming elk hunt, they needed the confidence to make a longer shot. The result was we started offering our long-range shooting schools.”

Held in Texas and Utah (with nine classes scheduled for 2019), the classes are designed to give the hunter a better sense of what shooting distances are really possible for them, as hunters. By the end of Day One, students are hitting steel targets out to 1,000 yards, although Ray stressed his classes aren’t focused on taking game at that distance. 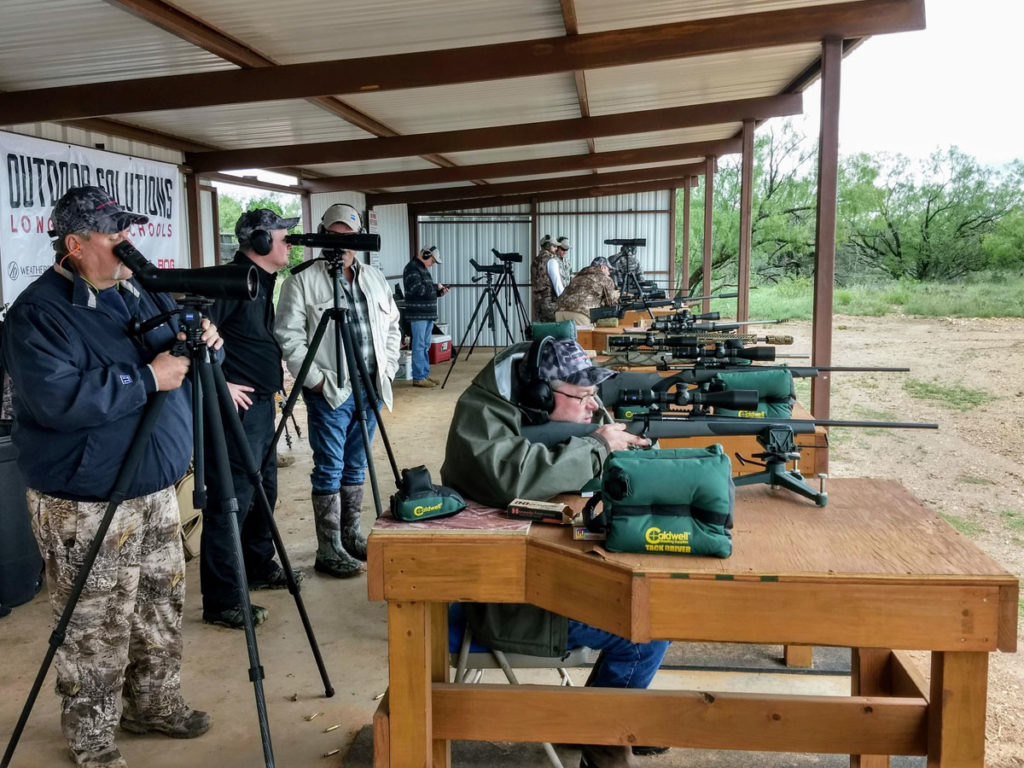 Shooters and spotters on the line.

“We help the hunter find that line—the line up to where he or she can make a clean, ethical shot on an animal. By the time they finish our class, that hunter should have a good sense of where that line is, and when a shot is too far for them, their gear and the weather conditions.”

Back at the range, we each grabbed a Weatherby Vanguard rifle (mine had “#5” written in marker on the stock) and ammunition, picked a shooting table and listened up. Our Outdoor Solutions shooting instructors, Ryan Long and Erik Lund, gave us a safety briefing, then coached us on trigger control and breathing.

Before we started shooting, they helped us set up our shooting app, the Ballistic ARC from GeoBallisitics, which we had downloaded onto our cell phones. Ballistic ARC, it turned out, was a key piece of our shooting kit. 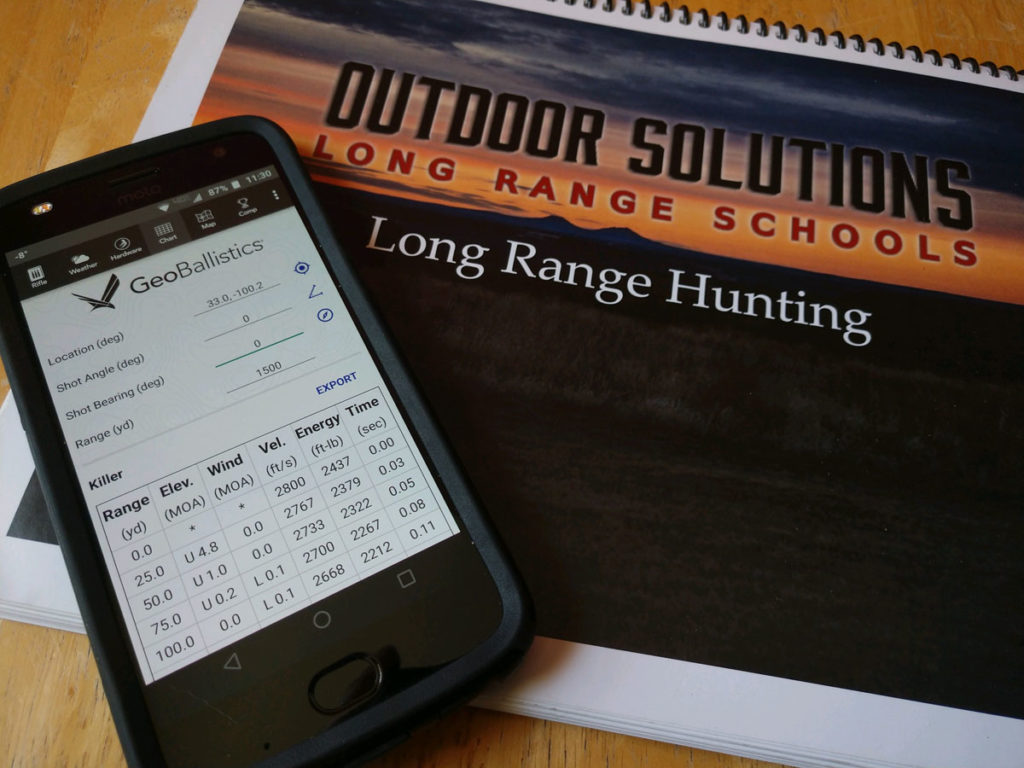 The Ballistic ARC app, from GeoBallisitics, was a key piece of our long-range gear.

The West Texas weather was in the low-50’s and raining hard as we began zeroing our rifles at 100 yards. The rain stopped after an hour and a light fog rolled into down range. By late morning, the sun was shining.

The Weatherby Vanguards provided by the class were chambered in 6.5 Creedmoor, and our Zeiss Conquest V4 scopes cut right through the rainy weather to the steel targets down range. We spent the morning extending our range, 200 yards, 300 yards, and got to the 800-yard mark before lunch, with all of us ringing up solid hits.

The process was easy enough. We were told to move to the next set of targets—steel targets sized 3MOA—and first checked our Ballistic ARC app for what sort of drop we could expect at the distance.

We had set our apps for MOA versus mil rads, as the Zeiss scope reticles had MOA hash marks. The app required us to plug in the bullet weight and ballistic coefficient, and muzzle velocity, and had inputs for weather (temperatures, altitude, wind speed, etc.), as well as sight height.

“Click for elevation, hold over for windage,” Erik Lund told us.

As we got onto a new target at a greater range, we first checked our app and then clicked the scope’s elevation knob up the required number of MOA’s so we could simply hold the center of the reticle right on the target. We then waited for our spotter to give us a wind call, and would hold into that wind with the MOA advice we were given. 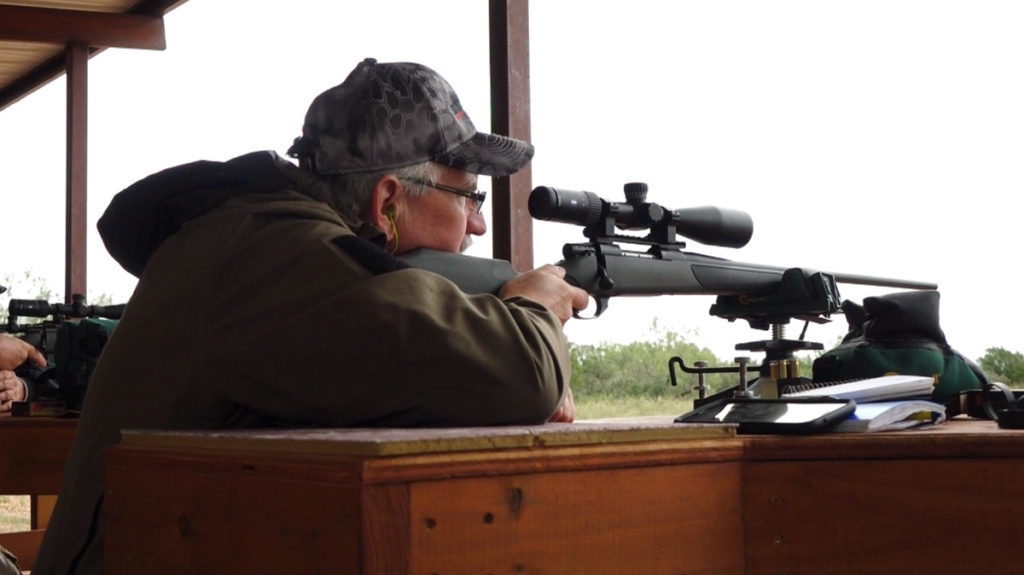 McCombie, behind a Weatherby Vanguard in 6.5 Creedmoor, taking his turn at the long-range school.

As spotters and shooters, we also practiced learning how to read the mirage and the grasses moving in the breeze. The wind wasn’t a huge factor that day, but even a 5 mile per hour breeze at anything over 300 yards will push a bullet significantly.

As a group, our breakthrough occurred at the 400- yard and 500-yard targets. At 100 yards, we were all experienced enough shooters to drill the target and at that point, 200 yards was no big deal. We had steel ringing at 300 yards without a hitch.

But 400-yard targets were noticeably smaller, and it was much further than most of us had ever shot at any type of target. Successfully.

I’ve done a fair amount of longer-range shooting, and while I am not an ex-SEAL sniper, I’ve hit many targets out to 1,000+-yards. So, while the distances didn’t make me as nervous as some of my fellow students, it was still a very good feeling connecting on the targets as the distances lengthened.

After lunch, we took on 900 and 1,000-yard targets. And hit them, often right in the middle of the 3MOA steel rectangles. Up and down the line I heard,

There were even a couple of rebel yells. 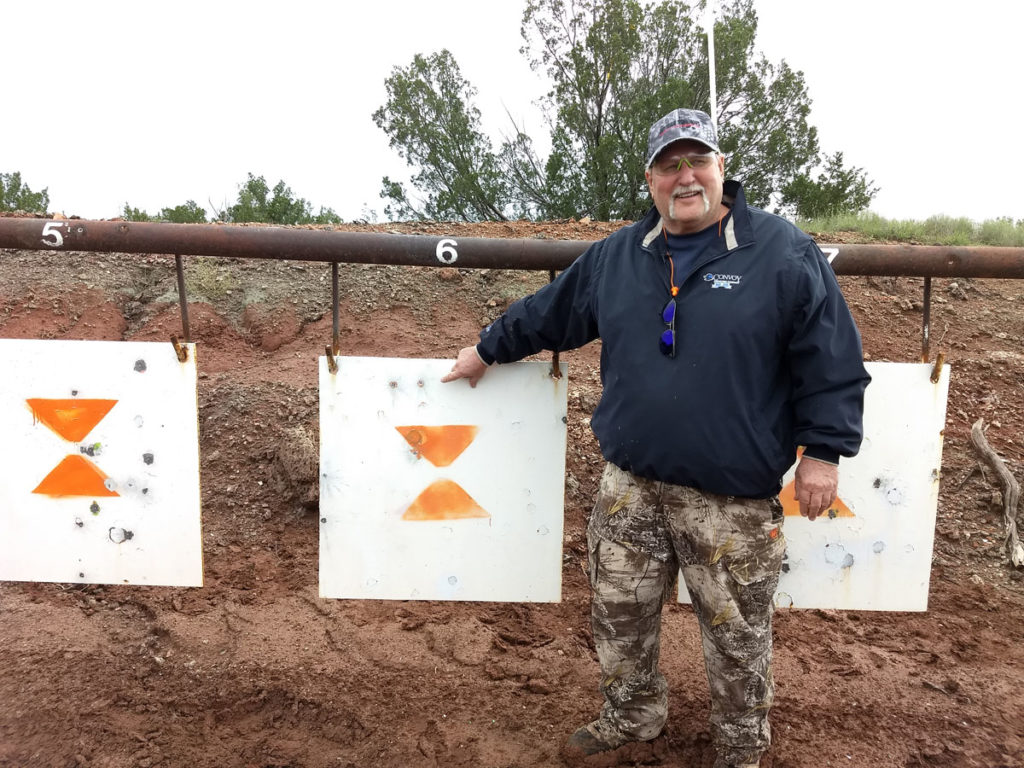 “I can’t believe it,” fellow student Robert Love of Garland, Texas, told me after he had drilled two shots at 1,000-yards, the bullets hitting within six inches of each other. “I’m so pumped! I was very intimidated when we came out here this morning and I saw those 1,000-yard targets so far away. I really feel like I accomplished something here today.”

As Long explained at the end of our first day, “All this,” he waved his hand towards the shooting tables, “lulls you into a false sense of security. Sandbags, rifle rests, and a spotter right behind you. But for the hunter, the real-world means finding your own shooting positions, dealing with mud and snakes and the sun in your face. No chairs, no tables, no overhead cover!”

Day Two provided us with some of that real-world shooting—minus the snakes—as we took on targets near and far in the West Texas landscape of the T Diamond Ranch. The land offered a mixture of arroyos and steep cliffs, rocky hills and wide valleys, all of it dotted with cedar, mesquite, and thick brush.

We used the same rifle rigs from our first day. Both Long and Lund stressed that we needed to “build our shooting positions.” Whether we were shooting over a log or with our back to the hillside, our first step was to get the rifle into position and find ways to steady it. Sometimes this meant sliding a backpack under our shooting arm’s elbow. Other times it was a matter of lying right back into that prickly brush for a solid backstop. 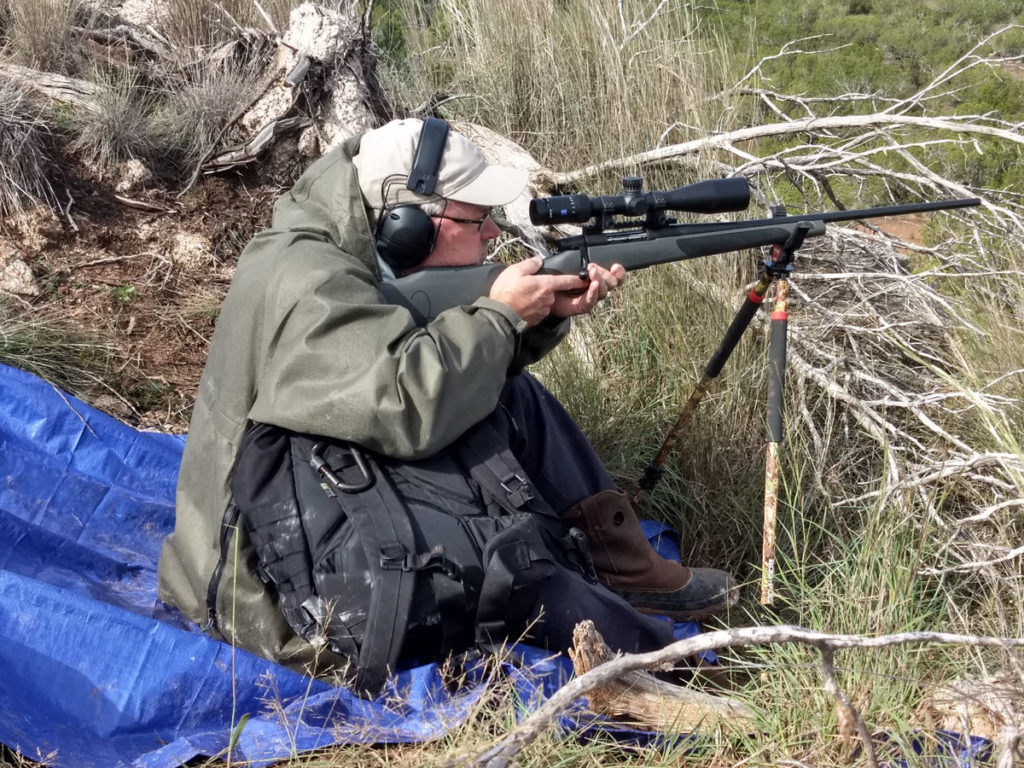 Day Two of the class had students shooting in the field. Note backpack under left arm for support, aka, “building” your shooting position.

Our steel targets ranged from 100 to 800 yards away, and we fired across valleys, up hills and down slopes. As a group, we did well, but we certainly had more misses than Day One, me included. And that was alright. The misses were part of us each starting to recognize our own limits, Greg Ray’s “line” past which we would not take a shot at an animal. 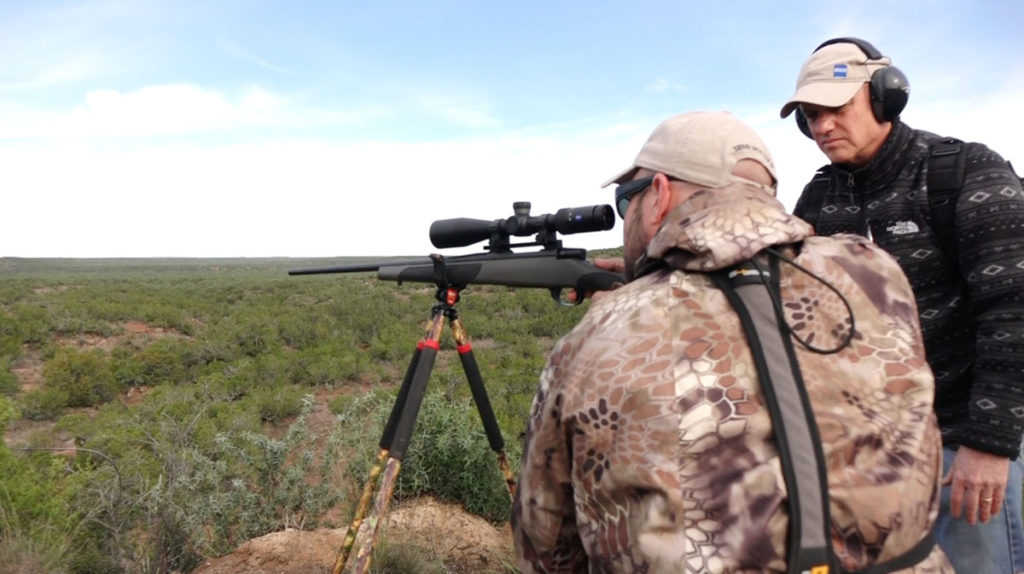 “My rule of thumb is if you can hit steel consistently at 1,000 yards?  You can reasonably take down that deer at 400 yards,” said Long.  “If you practice your shooting and take time to build your shooting position in the field.”

Of course, just how far a hunter can ethically shoot is a decision the hunter has to make.  But I can say with confidence the students for this Long Range Hunting School had their shooting range extended by at least at 200 yards.

We will need the practice to keep our shooting skills sharp. But we now know what is and isn’t possible when we shoulder our hunting rifle and line up behind the scope.

“Custom rifles and optics are great,” said Greg Ray, our host for the Long-Range Hunting Class. “But you don’t need a $10,000 custom rig to hit steel at 1,000 yards—or take on that game animal at 350 yards. We wanted hunters to know that, and we picked the class gear from items anyone can buy at their local hunting and shooting store.”

For rifles, we used the entry-level Weatherby Vanguard Synthetic, with a 24-inch barrel and chambered in 6.5 Creedmoor. It features a very crisp two-stage trigger and a weatherproof stock. The suggested retail is $649, though you can find it in stores and online much closer to $500. 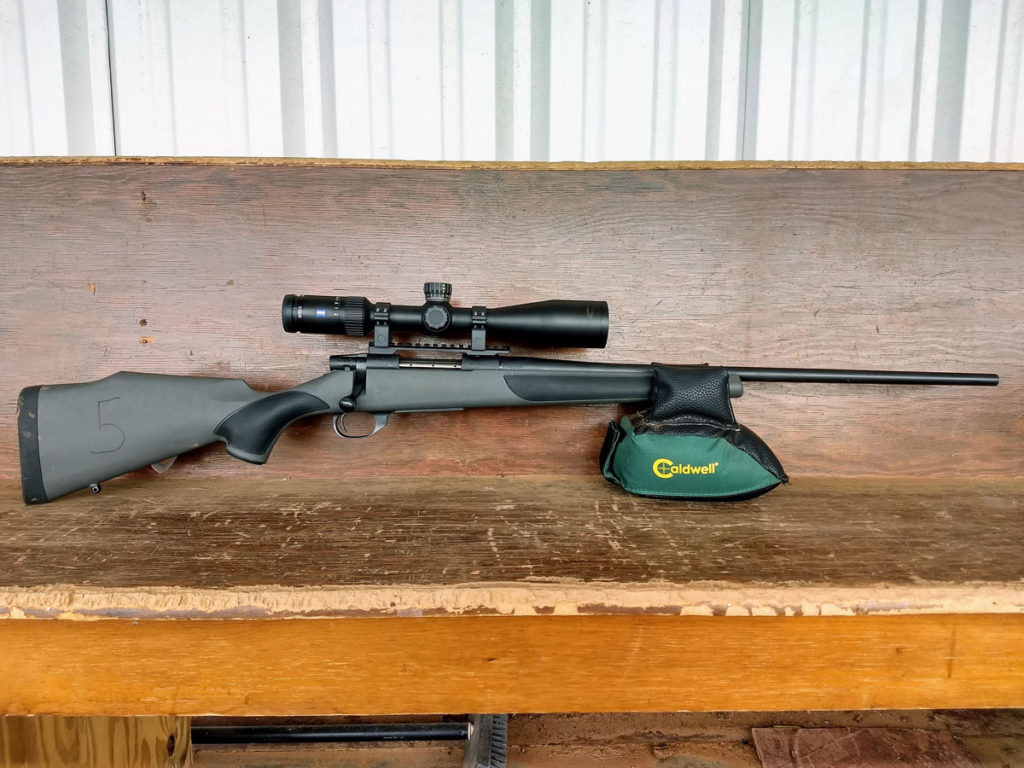 For the class, students were provided with a Weatherby Vanguard Synthetic in 6.5 Creedmoor, topped with a Zeiss Conquest V4 6-24×50 scope. This is McCombie’s #5. 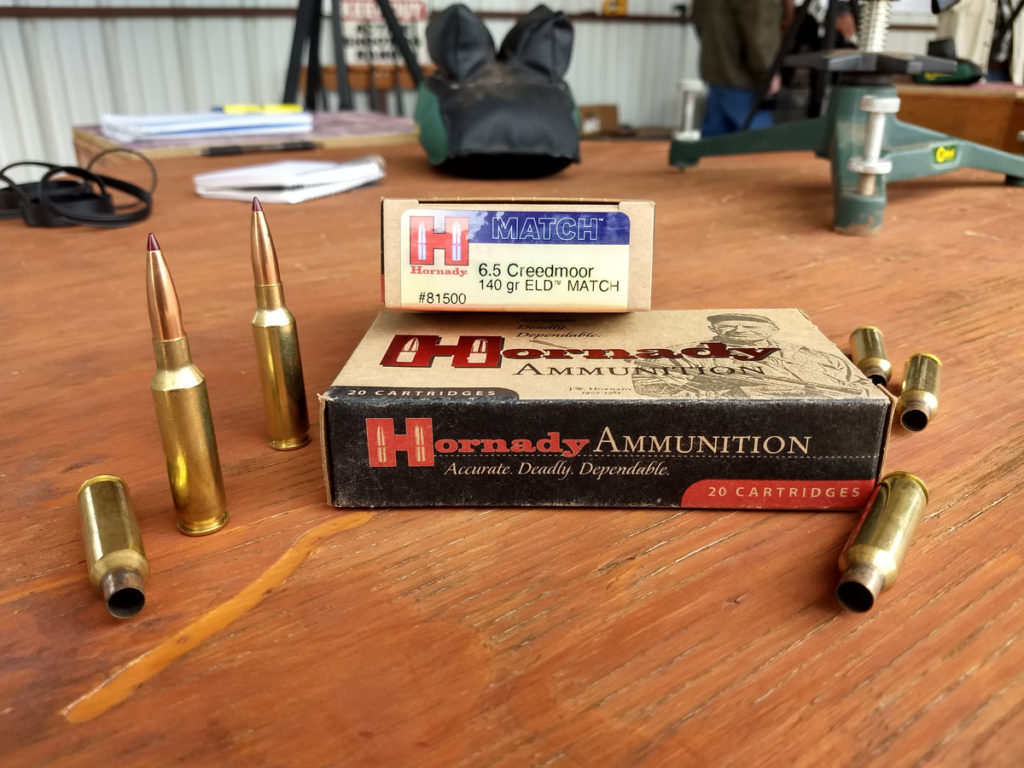 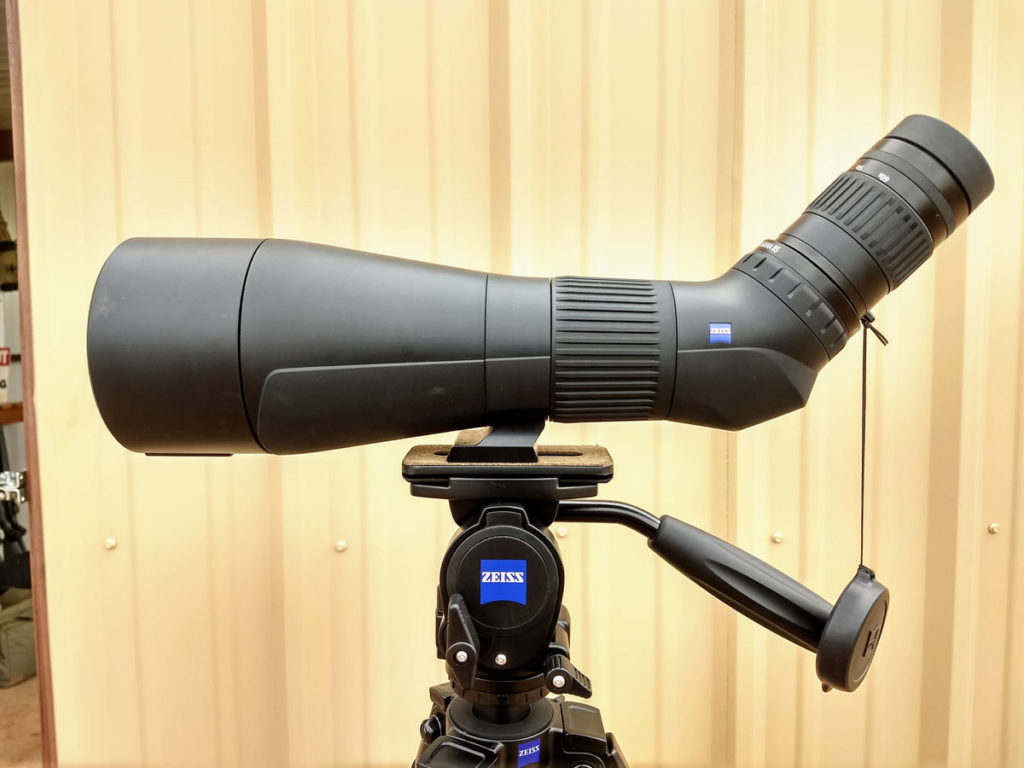 Students used the Zeiss Conquest Gavia 85 spotting scope, with 30 to 60 magnification power, to read the wind and spot for their shooting partner.

For spotting scopes, Zeiss provided their Conquest Gavia 85, with 30 to 60 magnification and an 85mm objective lens. Compact, the Gavia provided very sharp images.

Shooting bags and rests were from Caldwell, and they were a real plus at the shooting tables. 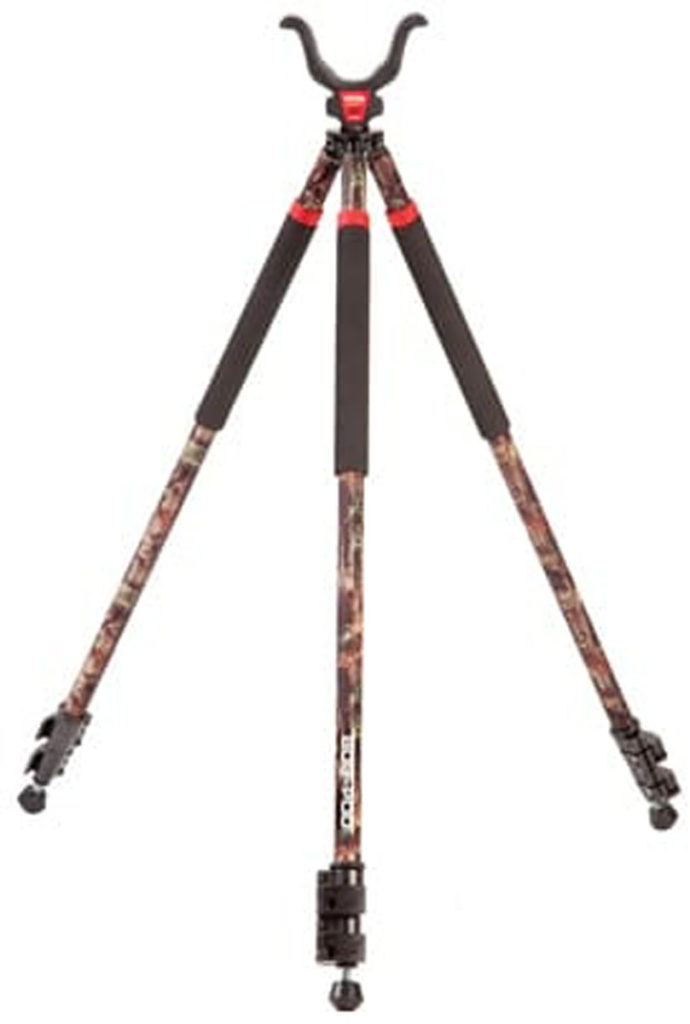 A partner of the Long-Range Hunting School, BOG provided bipods and tripods, including this the BOG CLD 3 Camo Shooting Tripod.

On Day Two, we also used shooting sticks from BOG in the field, including their BOG CLD 3 Camo Shooting Tripod which provided a rock-solid platform.

All the above products worked very well, individually and together. So well, we had to credit all misses to ourselves!