Honkers in The Chilly Morning: Goose Hunting in Central Manitoba

It was just before dawn when we slid into our layout blinds, and as I got into position I could hear the distant “honk-honk” of geese rising off the nearby lake. Through the layout blind’s webbing and the handful of barley stalks strewn over it, I watched the nearly back clouds overhead.

“Got a flock heading his way!” hunt host John Vaca said loudly. “Get it ready.”

That’s when the cold Manitoba rain began falling, the large drops popping across the top of my layout blind like someone tossing pebbles against the material.

I was goose hunting in central Manitoba with Federal Premium Ammunition and Stoeger Shotguns. Our guides were from Narrow West Outfitting.

They had taken us to this huge, harvested barley field, and we set up decoys and blinds in the pre-dawn dark. It was late September 2017, and the forecast called for mid-60’s and sun. Right now, though, it was cold and damp, the kind of damp that creeps into your bones as soon as you stop moving.

It was nice and warm inside my blind, though, as we eight hunters waited on that first flock of geese, the raindrops splashing my face. 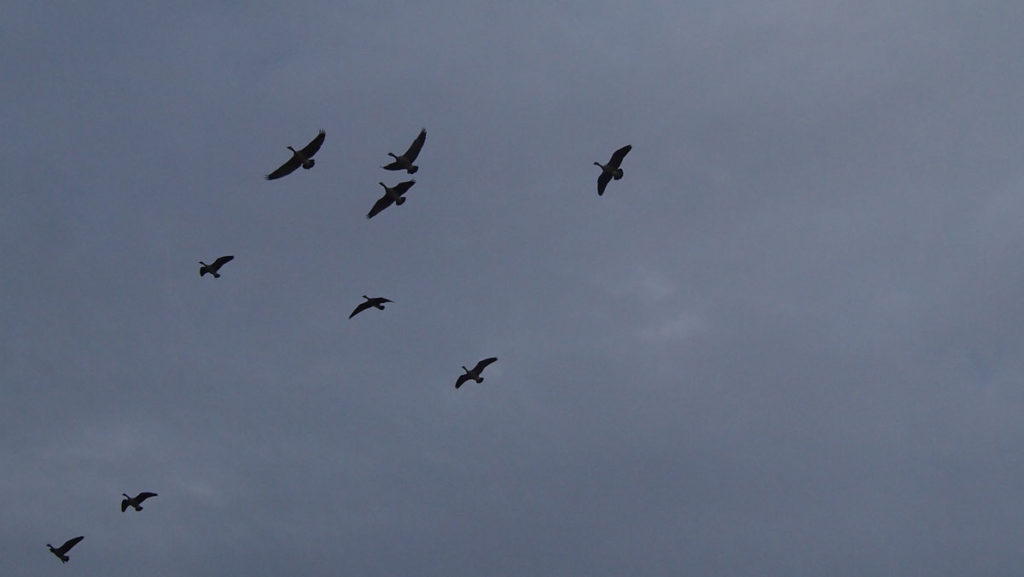 Flat on your back in a layout blind, watching the geese fly by…

Those first honkers flew right over us and beyond us, their dark bodies cutting through the air.

“Some more coming up on our left,” Vaca called out. “Patience, Boys!”

At the time, Vaca was a product manager for Vista Outdoors, managing Vista brands like Final Approach, a manufacturer of hunting products including the Pro-Guide XL layout blinds we were using. He also was (and is) a veteran waterfowlers, and a first-rate goose and duck caller, and during our Manitoba hunt he used an array of calls to lure in the geese.

It took several flights, but eventually, a flock made the commitment. Through my layout blind’s mesh, I watched the dozen Canada geese cut to my right, wheel around over the tree line ahead of us, and then come right back at our decoys. At about 70 yards out, the Canada’s cupped their wings and began dropping towards our decoys. 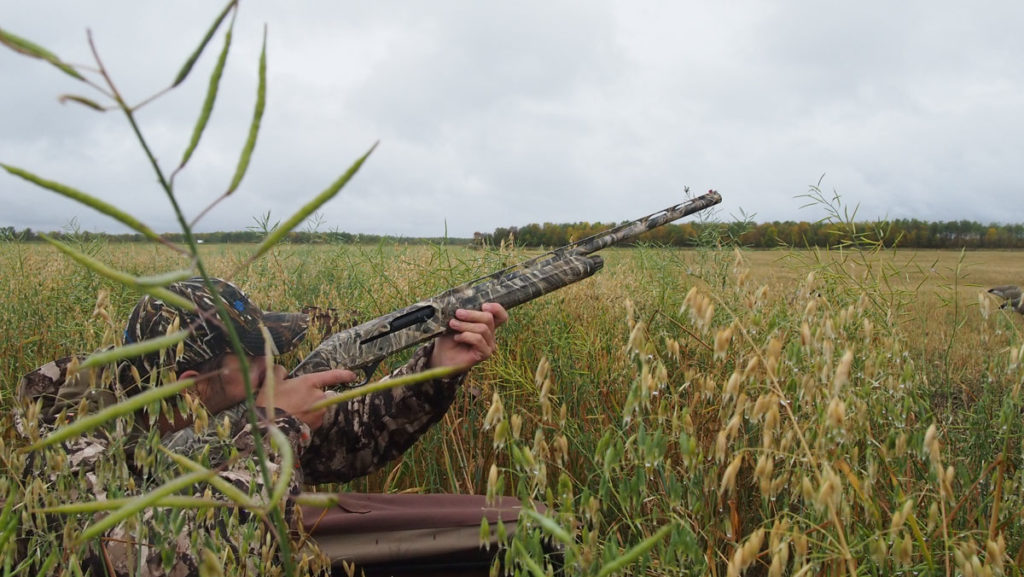 Goose hunting at its best: set up alongside cut-over ag fields in Manitoba.

For me, waterfowl hunting is all about just this moment. The birds turn and eye up the decoys, seem to hover for a moment, weightless, and I am sure they are looking right at me, waiting to see if I flinch, taunting me, testing.

I rose from my blind, my Stoeger 3500 semi-auto shotgun pressed to my shoulder, gold bead searching for dark grey feathers. A couple of seconds later, I’d fired off my three shells–and was pretty sure I’d missed everything.

I looked to my left and right. All of us sat up in our blinds, shotgun barrels pointed to the sky.

We laughed and nodded, realizing we hadn’t dropped a single bird.

“We had to get our misses out of the way!” someone called down the line. 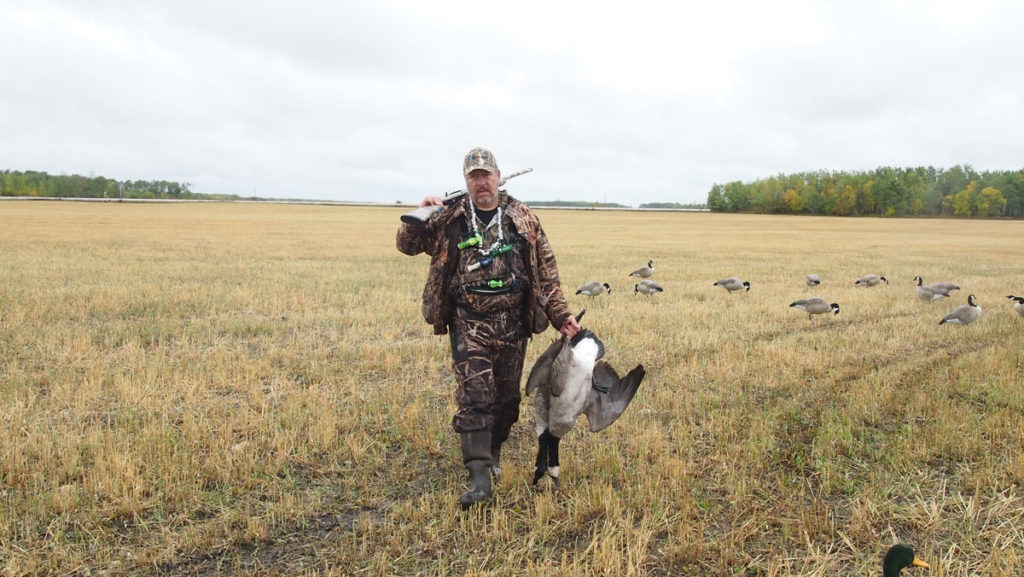 We barely made ten geese that morning. Oh, there were plenty of geese around, Giant Canadas and Lessers, snows and a few blues, swirling on the horizon in groups large and small. But there must have been some really enticing fields just before our set up. Flight after flight was headed our way, only to short-stop in other fields.

The next two mornings were much better goose-wise. Day number two, we set up in the dark alongside a new field, our decoys in a big “u” and hunters in layouts at the bottom of that “u.” This was an alfalfa field, with large, round bales dotting the field. I wondered if the bales might scare off the geese.

No need to worry, it turned out. The first flocks came in right as the dark gave way to grey dawn, and they kept coming until about 9AM. Some flocks zoomed straight down into the decoys from the front; others cut in from the sides, suddenly appearing on my right or left, wings tucked in for a landing.

The shooting was fast, and I was able to limit out and take my five geese for the day. 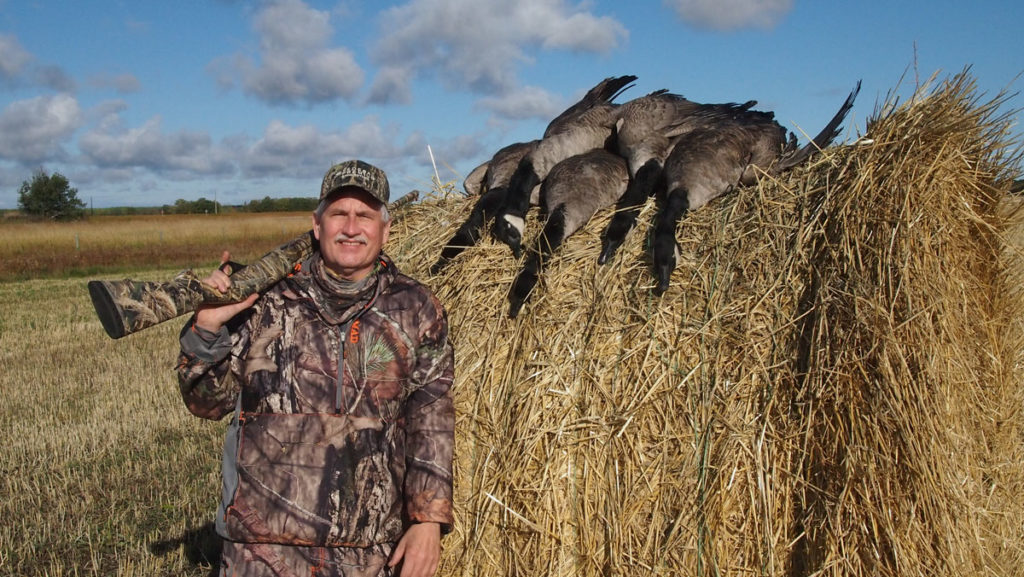 The author with day two’s limit of Manitoba geese.

All of us were using Stoeger M3500 shotguns, Stoeger’s workhorse semi-automatic. Between the morning hunts and some practice, I went through over 100 shells and didn’t experience a single failure to feed or extract. This inertia-drive 12-gauge features a 28-inch barrel and a Realtree Max5 camo finish; I had mine fitted with an Improved Cylinder choke tube. 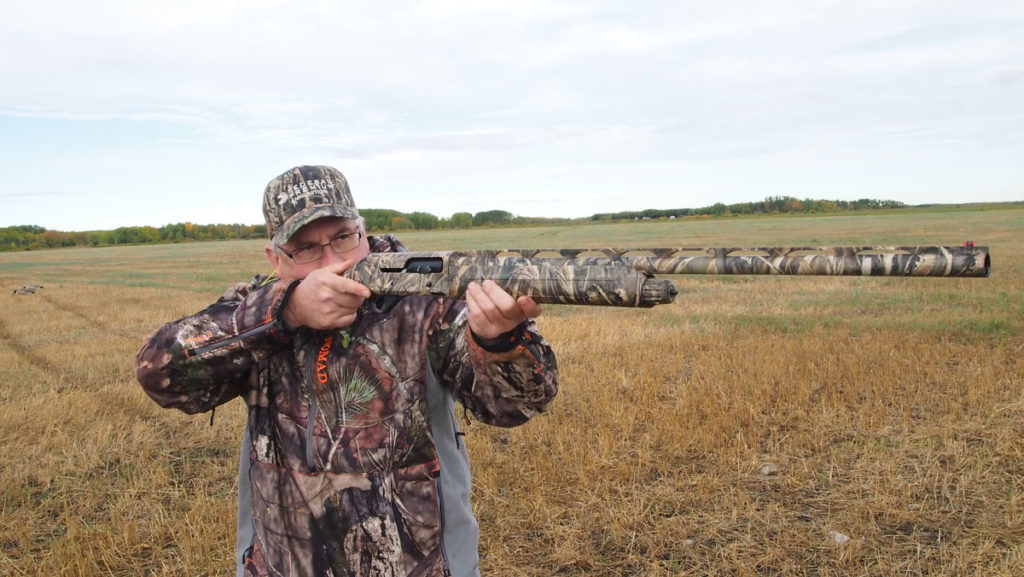 The Stoeger M3500 semi-auto shotgun is a reliable and rugged choice for waterfowling.

Recoil? Unlike a gas-operated shotgun, the inertia system in the Stoeger doesn’t bleed off gasses and, in the process, spread out the recoil. But the M3500 does have a recoil reducer weight in the butt of the stock, and that helps. Still, this is a 12-gauge, and when you are using waterfowl loads, somewhere around the second box of shells you do start to feel the kick.

The Final Approach Pro-Guide XL layout blinds I used were first-rate. The “XL” is for real, as these blinds have plenty of room. Inside my Pro Guide, I was able to comfortably stow my backpack near my feet, a couple boxes of shells along the right wall of the blind and could keep my knees half flexed and ready to push against the door to fling them open. A padded head and gun rest rounded out the blind’s features. 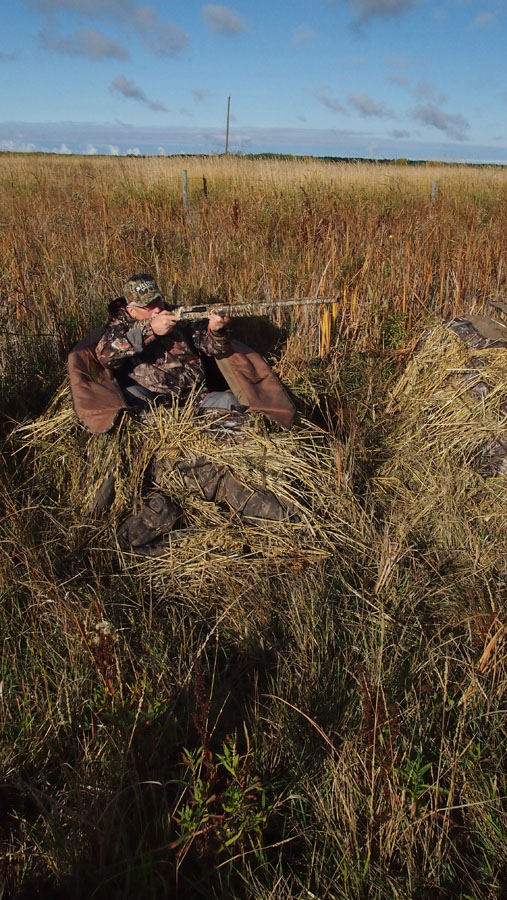 The Pro Guide XL Layout Blind, from Final Approach, was roomy and comfortable, and easy to camouflage.

We scored a good number of geese the third and last morning and even a few mallards.  I was able to connect with one mallard right at the end of the decoys, which I stepped off afterward at 43 paces. Throughout, I used Black Cloud FS Steel Close Range made by Federal Premium Ammunition. 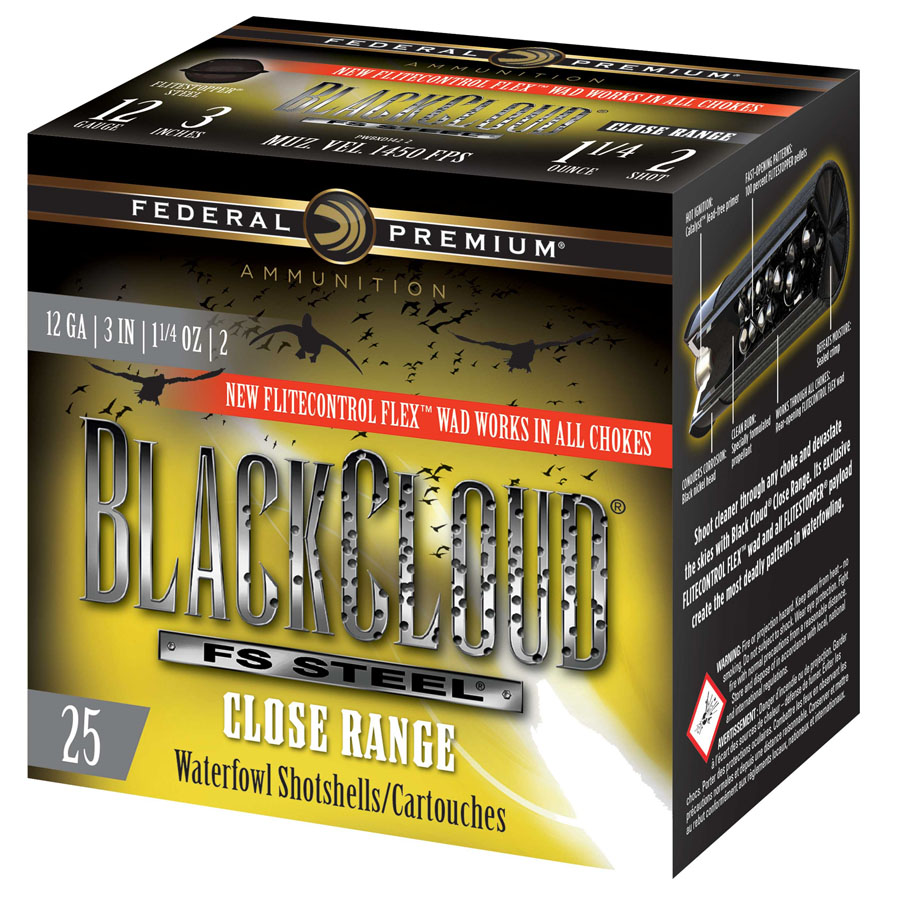 Available only in 3-inch shells, the 12-gauge options were loaded with either #2 or #3 shot. (There are 20-gauge versions, three-inches long and loaded with #2 or #4 shot.) I avoided the shells day one of the hunt because I figured the “close” meant they weren’t a good choice for far shots. Wrong, as that Day Three mallard proved, as well as three Canada geese at 35 yards I also bagged.

True, Black Cloud FS Steel Close Range does a fine job at 30 yards and in, achieving a full pattern within 20 to 30 yards. These loads use a 100-percent FliteStopper payload. Other Federal loads, like the standard Black Cloud, use a mix of FliteStopper and traditionally-shaped pellets.

FliteStopper pellets are elliptically-shaped, with a cutting ring around the pellet’s circumference. That ring creates a larger wound channel than traditional pellets, while Federal’s FliteControl Flex wad is designed to deliver tighter patterns through both ported and standard waterfowl chokes.

All in all, one fine hunt. I came back to the States with my limit of goose breasts and new friends made, plus fine memories of geese wheeling and dropping and feeling the nervous twitch run through my body the second before the honkers committed to our decoys. 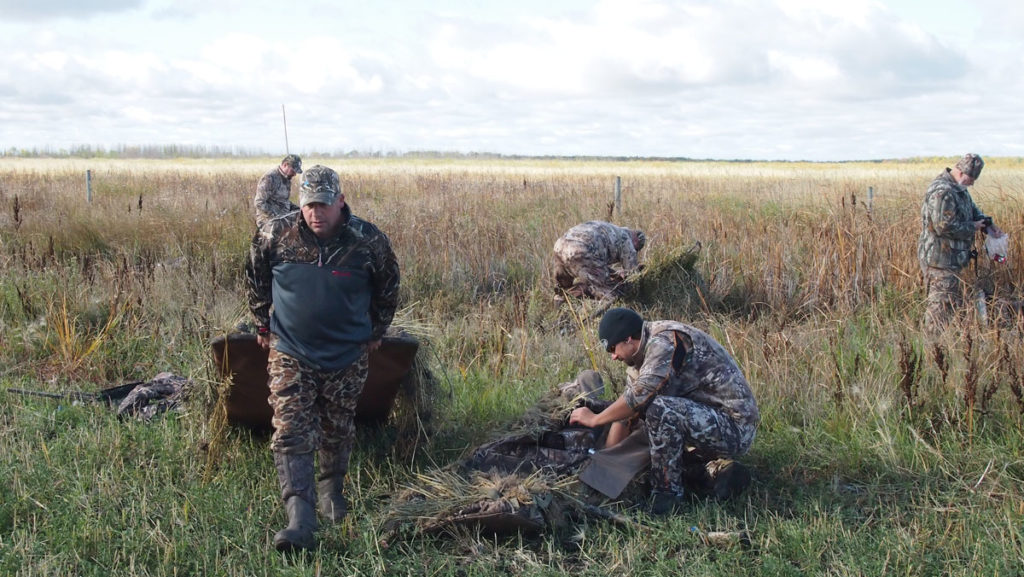 The morning hunt over, time to drag out the goose hunting gear.