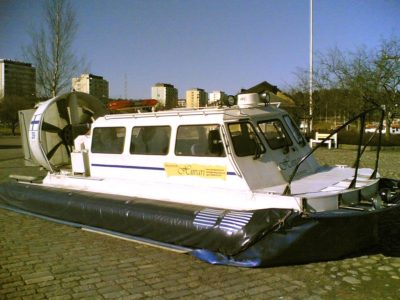 A hovercraft is a blower-powered amphibious vehicle that can navigate in shallow water or even mud. (Photo: Teemu Mäki, Wikimedia Commons)

Who says bipartisanship is dead?

The usually divided U.S. Supreme Court ruled unanimously last week in favor of an Alaska man who wanted to hunt moose using a hovercraft on the Nation River in the Yukon-Charley Rivers National Preserve in northeast Alaska.

The Court said that the National Park Service has only limited rule-making authority on state-owned waterways in Alaska, even if those rivers run through national preserves, and granted John Sturgeon the right to use his hovercraft to access land he’s been using to hunt moose for the last 40 years.

“We reverse the decision below and wish Sturgeon good hunting,” Justice Elena Kagan said, according to the Associated Press. “Sturgeon can again rev up his hovercraft in search of moose.”

At issue was the right of the federal government to create policies for waterways running through federally-controlled lands in Alaska.

The National Park Service argued that the Nation River was “public land” and that the agency’s water rights interest gave it rule-making authority under the reserved-water-rights doctrine.

But Sturgeon’s lawyers countered that the Alaska National Interest Lands Conservation Act (ANILCA), which gave the federal government authority over large swaths of public land in Alaska, grants an exception to the reserved-water-rights doctrine. Since Alaskans use rivers regularly for transportation and commerce, and since so many of those rivers lie within federal lands, Congress granted the exception to keep the Park Service from taking over Alaskan transportation.

The Court agreed, ruling that the reserved-water-rights doctrine allows the Park Service to protect the Nation River from depletion or diversion but not to target hovercraft.

Sturgeon sees the decision as a win not only for fellow Alaskan hunters but for all residents of the state.

“I was very happy that they kind of really understood Alaska. They recognized that the rivers in Alaska are very often our highways, like (Interstate) 5 that goes through California and Oregon and Washington, and the Yukon is kind of our equivalent of I-5,” Sturgeon told the AP.

The case started in 2007, when three National Park Service rangers told Sturgeon he wasn’t allowed to use his hovercraft on the portion of the Nation River that ran through a federal reserve. The agency had banned hovercraft in other states, and they said the same policy applied to Alaskans.