Hunter Airlifted to Hospital after Hanging in Tree for Two Days 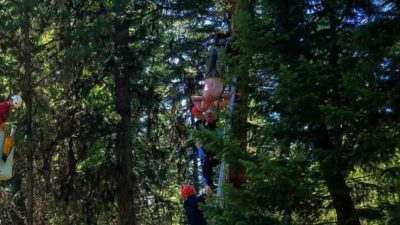 Eddie Voelker is in a medically-induced coma and on a respirator following his harrowing hunt and extended rescue. (Photo: AllOutdoor/La Grande Observer)

A 70-year-old Oregonian hunter narrowly survived a hunting accident that left him hanging from a tree for two days. He was found after an hour-and-a-half search by another pair of hunters who heard him calling for help – he was too high up to see easily.

Eddie Voelker hung in the tree upside-down for the two days before father and son hunters Steven and Joseph Royston overheard the cries for help. After his rescue, he was airlifted to a Washington state hospital.

“We didn’t stumble on him – he was hollering out,” said Steven Royston. “We were hunting about a mile or so from his location and I heard someone yelling. I knew we needed to do something.”

The two used a vehicle to cover the grounds faster. “My son honked the horn, and we knew we were getting closer to him,” Royston continued, “Once he heard the horn he started yelling louder. He kept it up so we could find him.”

“He said, ‘I’m up in the tree,'” Royston said. “Holy smokes. He was about 30 feet above and tangled in the ropes from his tree stand. His head was straight down, no way to get himself down. We knew we needed to get him help right then.”

The two then drove 8 miles to find a spot with cellphone service. There the called emergency services and flagged down a passing car. They asked the driver to go to stay with Voelker while they waited for assistance.

An estimated 30 first responders and rescue workers would eventually arrive to help, but none of them had the equipment to reach Voelker in his failed harness. Luckily, one of the responders thought to contact the local power authority.

A paramedic, who had trained with a local power company, recalled that they had special trucks to rescue linemen stuck on power lines.

“I wasn’t certain they were going to play ball,” said Capt. Robert Tibbetts. “Not because they aren’t helpful, but because it was such an unusual request. It was rolling the dice.”

With the help of the U.S. Forest service, rescuers were able to rig a line system to slowly lower Voelker, who was on the brink of dying. He would get worse before they finally airlifted him out.

In one sense, he was lucky that he was upside-down as he was beginning to suffer the effects of compartment syndrome. Compartment syndrome is a type of rhabdomyolysis caused by large-scale muscle trauma often seen in earthquake victims.

The paramedics were aware of the risks when they finally lowered him. “We knew the likelihood of cardiac arrest [was] extraordinarily high. We knew we couldn’t barge in and put him in the truck without doing treatment first,” Tibbetts said. “We were forced to slow it down a bit and deal with the medical side of it while developing a plan for the actual rescue.”

Shortly after lowering Voelker his heart stopped. Rescuers were able to resuscitate him and airlift him to the hospital, where he was placed in a medically-induced coma and on a respirator to recover.